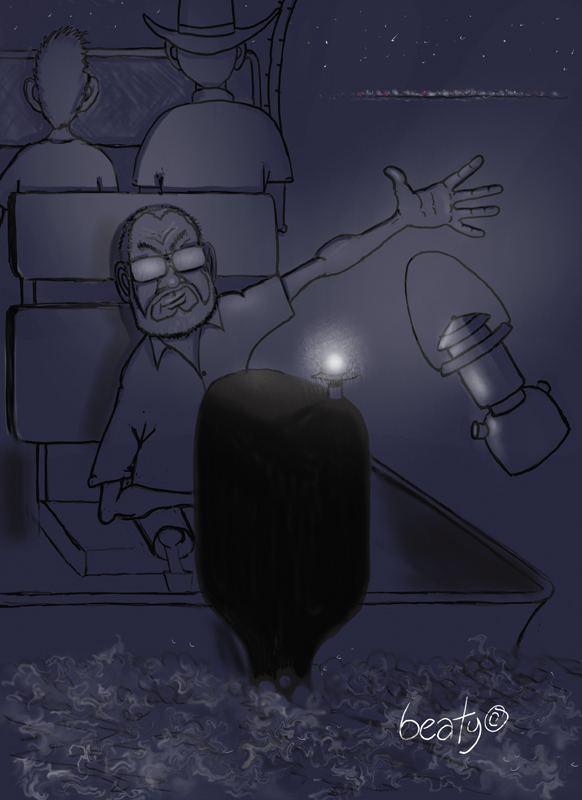 "Hey Red, come on with us," Bodie said greeting his friend. "Let's spread out a bit and maybe we won't miss any. I'll take the deep side."

The trio spread apart and made their way east with Bodie on the outside, Red in the middle and Tommy along the shore.

"Hang on a minute guys; I need to pump up my lantern," Tommy said.

Red and Bodie waited while Tommy rested the base of the lantern against his leg and pumped vigorously so it would burn brighter. "I still can't believe y'all are using those new-fangled electric lanterns instead of your old Coleman's," he mused.

"Well Tommy," Red asked, "How any times have we had to pump up our lights?"

Bodie chuckled at that and said the slough up ahead always held some real saddle blankets. "Tommy, you need to go up a little shallower because it gets deeper out here close to the slough. But watch out for the mud, it's bad in places."

The trio shuffled forward and Tommy announced that he had a nice flounder in front of him and proceeded to stick it. Red also gigged a flounder and then Bodie stuck one.

"We'll limit out right here if this keeps up," Red exclaimed.

Bodie was about to slide his hand under his flounder to prevent it slipping from the gig when he spied another a few feet away. An old gigger's trick; he leaned hard on the gig pole to drive the prongs deeper and went for the second. "I just got a two-fer," he exclaimed.

Tommy moved a little closer to Red who immediately said, "Back off a little dadgummit, you're getting too close!"

Tommy was about to say something but he saw a very large flounder swimming slowly along bottom between him and Red and went for it. Problem was, close together as they were, Red's foot was in the way.

Bodie almost dropped his gig when he heard Red scream. "You just stuck me you ignorant freak of nature!" Red yelled. Among other things.

Flabbergasted, and in haste to help his friend, Tommy lunged toward him and Red's screaming grew even worse.

"Ahh–watch what you're doing. You just burned my arm with that lantern," Red yelled.

Tommy jerked the gig out of Red's wading boot and backed off quickly–into the muddy spot Bodie had warned about and proceeded to sink to his waist.

"Help me! Help me. I'm in quicksand!" he screamed.

Bodie hurried to check on Red first. A huge red blister was rising on his forearm where the globe of Tommy's lantern had bumped it. Balancing against Bodie, Red got his bootie off and happily learned the three-prong gig had missed his flesh. Though stuck completely through both the bootie upper part and sole, the prongs had miraculously landed harmlessly between his toes.

"No thanks to that little freak of nature friend of yours," Red replied. "Now go drag him out of that muck hole before I go over there and shut him up permanently with this gig."

Bodie waded to Tommy. "You're not in quicksand, Tommy, and you're not about to drown. Flip the bail up on your lantern and hand it to me while you crawl out of that hole."

Tommy held the lantern for Bodie, but when he grabbed the handle it was the big guy's turn to scream. "Tommy–you had the bail resting against the glass and it was red hot!" Bodie yelled.

Still stuck to the waist and worried about the lantern, Tommy squeaked, "I'm really sorry, Bodie. But could you get it out of the water and turn it off. Please?"

Tommy began belly crawling from muck hole and Bodie helped him to his feet. "I told you about that spot before we even got to it," Bodie said gruffly. "Maybe next time you'll listen."

"Well," Red sneered, "We've ruined this spot. Might was well move down a bit and see if there's any on the other side of the slough."

Tommy gave Red a wide berth as he shuffled toward Bodie. "Since you broke my lantern, Bodie, I'll just flounder with you and your light-OK?"

"OK, but don't get too close or ahead of my light," Bodie replied, "We've already had enough drama."

A sand bar stretched across the opening of the slough and the trio worked slowly along on both sides. "Man, I have a pretty one here," Red called out as he stabbed a fish.

"Gimme some light over here, Bodie," Tommy said, "I think I have a big one."

Bodie angled his light and said, "Nope. That's a stingray, Tommy. Can't you tell the difference?"

The mere mention of a stingray made Tommy so nervous that he remained glued to Bodie's side–certain that some sea monster was about to take his life. The last 30 yards of the bar held so many flat fish that the boys filled their limits and turned back toward the boat with more easy targets in sight.

"Man, the bait sure is nervous in these guts," Bodie thought aloud.

"You're telling me!" Red exclaimed.

"Any chance you boys might be up for a little nighttime topwater action?" Bodie asked.

Red immediately replied, "Count me in; I love night plugging."

Tommy was silent for a few seconds, pondering monsters in the dark and certain death. "Well ah, yeah, I guess I'm in too. But I need to clean my lantern and that'll take a while. I'd hate for that salt water to ruin it."

"Go ahead and do that Tommy while we fish; I'll turn on the deck lights for you," Bodie offered.

Bodie and Red tied topwaters and waded away from the boat while Tommy worked on his lantern. "I swear, from out here that boat of yours looks like a UFO, lit up with those LED lights," Red joked. "And Tommy, the little freak, looks like he's rubbing for a genie."

Bodie's first cast brought a strong blow-up and Red hooked something that had some size to it. "Dang Red you have any line left on your reel?" Bodie asked.

"I still have plenty and the drag is pretty tight," Red replied. "He's a good one, for sure!"

"Big redfish or a really big trout," Red surmised as the fish turned and ran behind him. The mono leader snapped as the fish pulled hard for a second run, "But I guess we'll never know." Disappointed, neither man spoke as Red switched on his cap light to tie another lure.

Bodie was listening to the click-click of his plug in the darkness and heard the explosion as instantly as he felt the pull of the fish. "Nice trout," he called to Red.

After Bodie and Red had strung a few trout apiece, Red said the burn on his arm was starting to sting and maybe they should call it a night. The two friends headed back to the boat and could see Tommy sitting on the front cooler, kicked back sipping a beer.

Climbing the boarding ladder, Red noticed Tommy's lantern in his path and reached to move it. "Yee-Ow that thing's HOT," he shouted as he let it fall to the deck.

Tommy jumped from his ice chest seat to grab it when Bodie went off about having warned him to never light a lantern in the boat.

"I had to test it, Bodie, to see if it still worked," Tommy sniveled.

"I tell you Bodie, I've had enough, I'm going to have to kill him!" Red snarled, rubbing his hand.

"Red, let me see how badly you're burned," Bodie said. "Gotcha pretty good; I'll need to doctor it. Tommy–quit fooling with that damn lantern and bring me the First Aid kit."

Red didn't say much on the way in, just sipped his beer, muttering something about how badly Tommy needed killing. As they eased to the dock to let Red off, Bodie and Tommy heard a splash but all they saw was Red gathering his gear and stepping off the boat.

"Don't call me–I'll call you," was all Red said as he made his way to his golf cart and sped away. Then a fiendish laugh split the night.

"Tommy, you really made him mad tonight," Bodie said with a frown.

"Oh, he's just an old grouch, Bodie. It was all an accident; I didn't do anything to him on purpose," Tommy whimpered.

When they got to Bodie's dock and began unloading gear, Tommy went into a panic opening hatches and checking everything twice.

"What are you looking for?" Bodie quizzed.

"I can't find my lantern and it was right there," Tommy shouted, pointing to where Red had been sitting.

"Say, Bodie, you don't think that splash was my lantern going overboard do you? Old Red's a grouch and all but, he wouldn't do anything like that–would he?"

Bodie just grinned and shook his head. "Let's call it a night Tommy. I'll give you one of my old lanterns if that one never turns up."