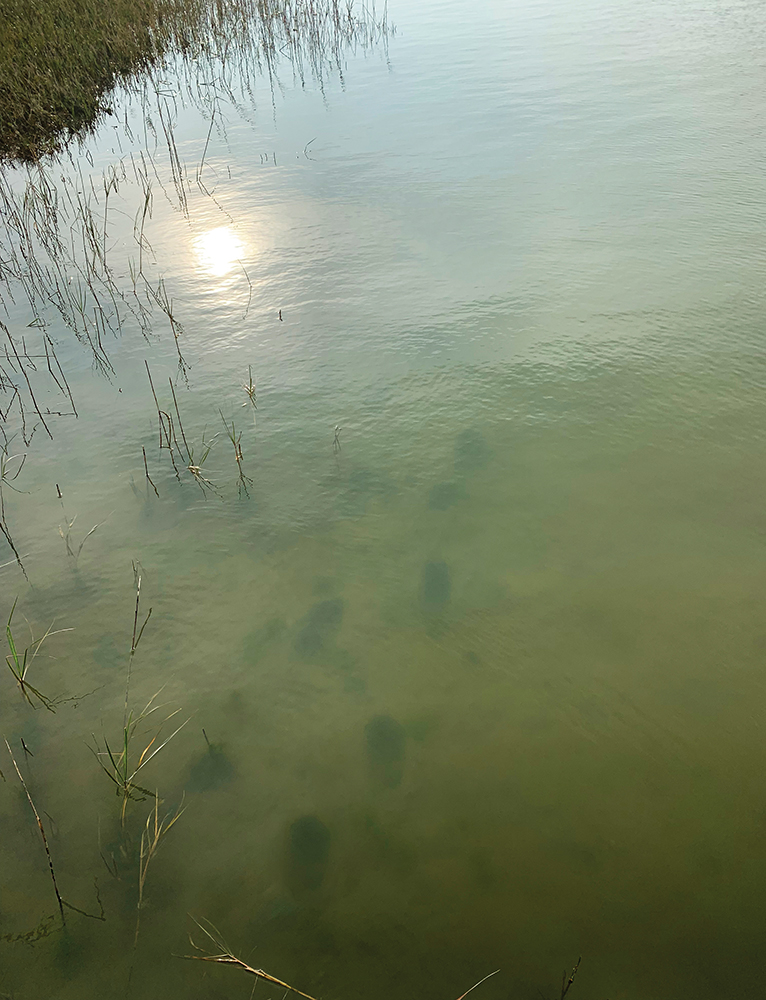 Almost fifteen years ago I wrote a piece for this magazine that I titled “Footprints.” Judging from the favorable feedback I received it evidently registered well with readers. When my Dad passed away in 2007 I used a paragraph from “Footprints” in the introduction of a short story I wrote for him.
A few weeks ago I received a letter from a reader, saying he remembered the story very well, but his copy of the magazine had long since disappeared. “I would like to see a full reprint in an upcoming issue,” he urged.
After discussing the request with our editor, he agreed to grant the request. For those who remember, I hope that you do not mind reading it again. For those seeing it for the first time, I hope you enjoy it.
~Martin Strarup~

Wading a stretch of soft sand and shell shoreline not long ago, I noticed the faint tracks of another fisherman in about two feet of clear water. With no knowledge of how old the footprints were or who might have made them, it was pretty cool following the trail, catching an occasional fish, and wondering if he too might have enjoyed similar success.

I walked where he had walked and it was easy to imagine, from the position of his footsteps, where he might have been casting. When the tracks became numerous and muddled together, whether he might have encountered a school of willing fish. The way the tracks would often turn to the right and sort of mill around a few steps made me think that he might have been landing one. I made a game of trying to do the same thing, where it looked as if he had stayed in one place for a while.

I could tell when he was moving faster than normal as his stride would get longer and I could visualize when he was on some fish as the tracks would turn and face the open bay. Once, the tracks turned and faced to the rear, where I imagined him casting toward the rubble of an old boat ramp. I did the same, making several casts myself, but found no fish interested in what I was offering.

Moving along, I came to the old pier that had long ago seen its better days. Some high tide from some forgotten storm had done a lot of damage to the planking and most of the T-head had been ripped away – a victim of pounding waves. I wondered why the owner had never rebuilt the pier as it is in an excellent spot and well removed from the masses. I followed the tracks under the pier and when I bumped my head on the center joist, I wondered if he had done the same.

When I came out from under the pier, the tracks took a turn toward the remnant of the T-head and I thought that was rather odd as it gets pretty deep out that way. But I followed best I could, vowing to continue his trail.

He knew something that I didn’t, but that I was quick to learn about. The years of tidal movement had created a narrow sand bar of sorts, along the east side of the pier, and you could walk it all the way out to where the pier stopped.

I lost his tracks in the deeper water, but I knew somehow they were still there. Casting towards the hole at the end of the pier was productive as some really nice trout were hiding in there, and this time they were hungry for the lure that I offered them.

When the action slowed, I reversed my path and headed back toward the bank, hoping to pick up his trail again when the water became shallow enough. Sure enough, there they were and once again I began following the tracks of this unknown fisherman.

There are two large pipes that extend into the bay, placed there long ago to drain an inland marsh lake, and I wondered if he knew how to get around them or if he would take the easy route up along the bank until he was clear of them.

He knew how to get around those pipes alright, and I wondered again who this mystery man was as I followed his tracks. Stopping where he stopped, casting where I thought he would have cast, and catching a nice strong winter trout now and then when I did. I had a birthday fish-fry in a few days and had promised fresh trout. Adding one to my stringer I wondered if he had kept any when he fished here.

When I got to the concrete seawall that extends out into the bay, I looked closely at his tracks where they came out of the water to go around the barrier. The track in the sand told me the man was dragging something that I guessed to be a stringer. I tried to picture how large his fish might have been from the drag marks.

My limit trout went on my stringer there at the seawall and I decided to follow his tracks a little farther, just to see where he had gone and if he knew to fish the slough that cut into the bank about 100 yards ahead. But the tracks stopped ten yards beyond the seawall. The indentions in the sand told me that a boat had been beached there, and that he had climbed aboard – the reason the trail ended.

I had a mile of shoreline yet to walk before I could sit down and rest, and I envied him being in the boat and likely enjoying a refreshing drink and comfortable seat.

I also felt a little sad that my adventure was over and that I would have to make the trip back without the intrigue of following the stranger’s trail.

On the walk back to my own boat, I wondered if anyone would ever follow my tracks. If they did, would they learn from them the way I had learned from those I had followed?

Did I leave deep enough tracks? Was my path true or did I venture too often from the straight and narrow into the unknown? Would they hesitate at the hard places and take the easier way around, or would they put in the extra effort to follow where I had gone and succeed as I had succeeded?

Would they wonder who I was, if by chance they even cared to follow where I had gone? Would they feel a twinge of sadness when my tracks ended and only theirs would continue onward?