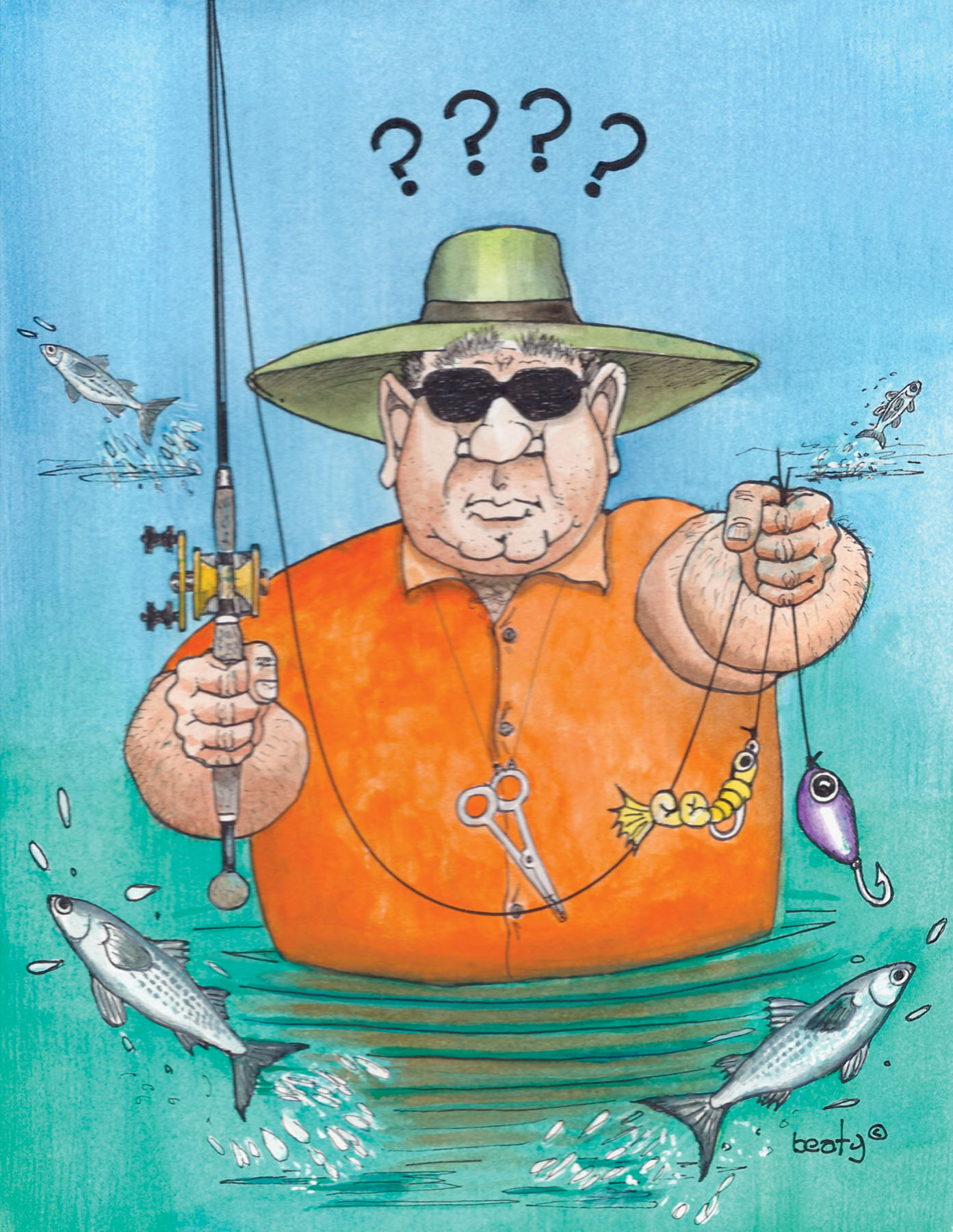 You could barely make out the crab trap floats as we skimmed across the water, and the rising sun was just starting to turn the eastern sky that beautiful shade of orange and purple before peaking its head above the horizon. We were headed back to where we had found fish the previous afternoon, and I was following the track on the GPS that we had laid out on our way in after a great afternoon of fishing.

We had high-fived each other when we woke up to a heavy dew and no wind at all, and to say that our anticipation was high would be putting it mildly. We were almost drooling at what we knew would be the perfect topwater morning.

I shut the motor down about 200 yards short of the end of the GPS track so that we could wade in to the guts where the fish had been holding the day before. Rafts of mullet were milling about, and there was nervous water all around us.

I watched my son cast in front of a large pod of mullet as I finished tying on a favorite floater. After ten casts or so apiece we were looking at each other with that Whats up? look. Sterling stuck with his topwater, but I switched over to a soft plastic on an 1/8 ounce lead head. After about 20 casts, fanned all about the area, our expressions echoed our thoughts the fish just weren't there.

The moon was quite visible now above the eastern horizon and a steady five mph breeze was coming from the southeast. The current wouldn't sweep you off your feet, but the tide was definitely coming in. We had bait all around us, yet none was being chomped by snaggle-toothed predators with yellow mouths.

I really didn't have a clue. We changed baits, we changed colors, we changed our retrieves; I'm sure that I saw Sterling spit on one of his baits, and I uttered more than one prayer to Deity but nothing changed the fact that the fish, if any were there, simply were not interested.

We waded back to the boat, had a cold drink and some Prasek jerky while discussing what our next move should be. Sterling thought we should stay where we were, and I was of a mind to make a move in hopes of changing our luck. We talked for about fifteen minutes or so and then someone flipped a switch.

About fifty yards or so off our port bow, bait began exploding, and within minutes there were audible surface bursts and slicks popping all around us. We eased away from the boat toward the closest gut and while the lure on my line was a last ditch idea only thirty minutes earlier, my first cast resulted in that solid thump that we all like to feel through our fishing rods. Sterling was bowed up as well, and for over an hour we steadily caught fish.

In the Lower Laguna where we were fishing, the daily bag limit is five trout per person per day, and those five went on the stringer in literally a matter of minutes. We continued catching and releasing for about an hour or so until whoever had flipped the switch on got up and flipped it back off. Just like that it was over. We kept casting for probably another half hour but to no avail; it was a done deal, and we knew it.

We talked about that morning for a long time. The way it seemed we had everything in place yet nothing happened for a couple of hours, then everything happened at once. Why? I have no idea– none, zip, nada. I've played that morning over in my mind a hundred times and still have no clue. I've asked others about it as well and have gotten more than a few opinions: the fish weren't hungry, the moon was not lined up properly with Mars, we were not holding our mouths right, we needed more wind, and my favorite, the fish decided on brunch instead of lunch.

How about it you guys and girls? Ever had perfect conditions and the fish not cooperate, not even one single fish then all of a sudden its on like Donkey Kong? Did you dwell on it or just figure that was how it was and were just glad that the fish finally decided to give you some action? Not curious at all as to why they behaved the way that they did?

I guess that what is bugging me is that I don't know why the fish acted and reacted the way they did. That could be some sort of million dollar question; after all Mike McBride once said that he pitied anyone who tried to figure out why something with a brain the size of a pea does anything.

So the conditions were right. The wind, the water movement, the bait, the moon, the barometer; everything was in place that is conducive to catching fish according to all of the fishing shows that I've watched and the articles and books that I have read about fishing.

Maybe the fish don't watch the same television shows or read the same magazines and books that I do.

Keep trying to figure them out.