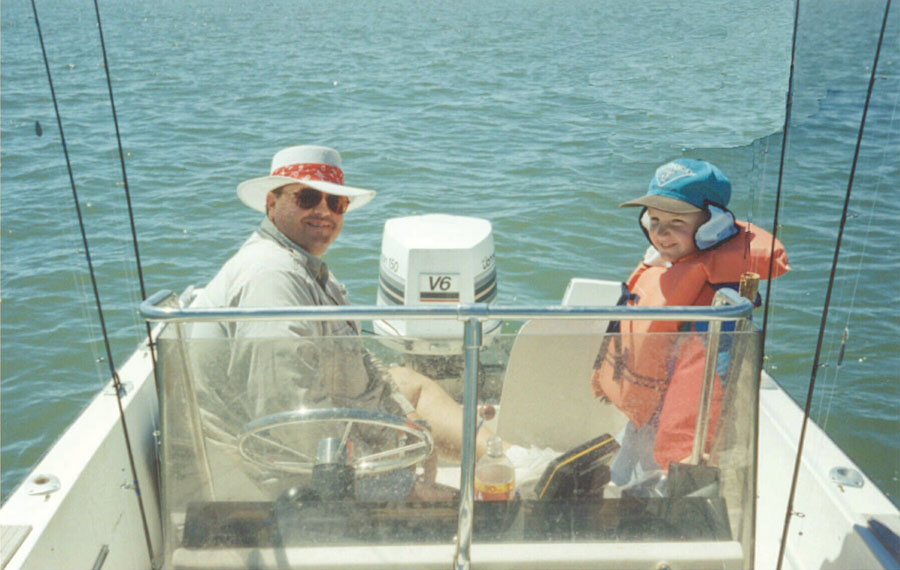 Me and Sterling on an early fishing trip.

The holidays always bring back memories for me; memories of family gatherings during Thanksgiving and Christmas, memories of trips that I have taken, of places that I have been and of people whom I have known. And while some memories bring some sadness to my heart, for the most part they make me smile as I realize how fortunate I am to have been a part of those gatherings, to have made those trips and to have seen those places and to have known those people.

For years I never took a camera when I went fishing or hunting and man the photographs that I could have taken had I only had one at the time would certainly help to enhance and jog my memory of those trips. But I'm blessed with a good memory and in my mind's eye I can recall those images and while not as well as I could with a Polaroid the image is still there. But just like those old pictures that fade over the years so does the memory and while it may be cliché to say, I sure would like to have those moments back.

So while I'm feeling a bit melancholy about the past I want to share with you some excerpts from an article that I wrote in 2003 that dealt with photographs and memories and I want to remind you to take as many pictures as you can of trips that you take, of places that you visit and of people that you know. And use a digital camera; when you're memory starts to fade those digital images will still be crisp and clear. Oh and remember that the article was written over 8 years ago…I passed the half-century mark four years ago ---

As I was reflecting on almost a half-century of life the other day, I started thinking about things that I would change if I could. As I was pondering things that I no longer have any control over, I picked up a fishing rod and thought about fishing trips that I've had and I realized that as far as fishing goes, I really have no regrets at all. Oh sure, being on the "wrong side of the big trout ledger" irritates me to no end (the side with the names of anglers who can claim ten pounders), but that's not a regret as I fully intend on moving to the "right side of the ledger" before I hang up my rod and reel for good.

Picking up that rod was a good move because it took me away from thoughts of things that I should have done differently, and instead brought me back to the important subject of fishing. As I said, I really have no regrets at all as far as fishing goes. Oh sure, there were trips that were less than perfect, moments when my concentration was on something other than the lure at the end of my line and cost me a good fish, but those can't be considered as regrets because I learned from my mistakes and didn't allow them to happen again…well, not very often anyway.

So I started thinking about past trips, days spent on the bay with my Dad and what I'd learned from all of the free lessons that he gave me and I remembered friends who I fished with who are no longer here, and friends that I fish with today. I thought of my first big trout and of hundreds of long ago fishing trips that I still remember and that still can make me smile.

I remembered my son's first fish and I thought of all the fish that he's caught since. I'd frown when I'd remember fussing at him about a mistake he made but a second later I'd smile when I would remember him correcting his mistakes and moving forward. And isn't that what life is all about; moving forward?

I'd like to think that I've left something behind for others to use, but if I haven't, then I can find comfort in the fact that the real legacy that I leave behind can be found in my son. He loves fishing just as much if not more than I do and he approaches it with a youthful enthusiasm that is more vigorous than my approach these days. Oh not that I don't love what I do, it's just that I feel aches and pains after a day's wade in places that he doesn't even know exists…yet.

As I was reflecting on life and of days when I was younger, I pulled out some old fishing photo albums and I was reminded of that old Jim Croce song, "Photographs and Memories", and I realized that a photograph is indeed a memory. A picture is a moment or event from the past, captured on film that can be viewed over and over to remind one of that particular moment or event. And that caused me to realize that I did indeed have some regret where fishing was concerned. I didn't take a camera on enough fishing trips.

Don't forget to take a camera! My excuse was always that I didn't want my expensive Minolta ruined by the saltwater or salty air, and a lot of pictures weren't taken because of that reasoning. Now days though, you can buy a waterproof disposable camera that takes good pictures for less than $10 so there really is no excuse not to have one with you for that "Kodak" moment. In fact I carry one of the waterproof disposables while wading and it comes in real handy at just the right moments. Digital cameras will take much better images than you could ever get from scanning a picture from one of the disposables, but you don't have to have a $500 camera to capture a particular moment. So don't make up excuses, get a camera and have it with you. You'll enjoy the photographs and memories for years to come."

A lot has changed in eight years. A good Olympus waterproof digital camera that you can carry in your pocket while wade fishing can be bought for under a hundred bucks now and all you have to do is connect a USB cable from the camera to your computer to view the pictures. Technology has taken the hassle out of getting your pictures quickly; you don't have to take film to be developed and you don't have to worry about the pictures fading over time.

I hope that you all will go out and make some memories and please, take plenty of pictures.