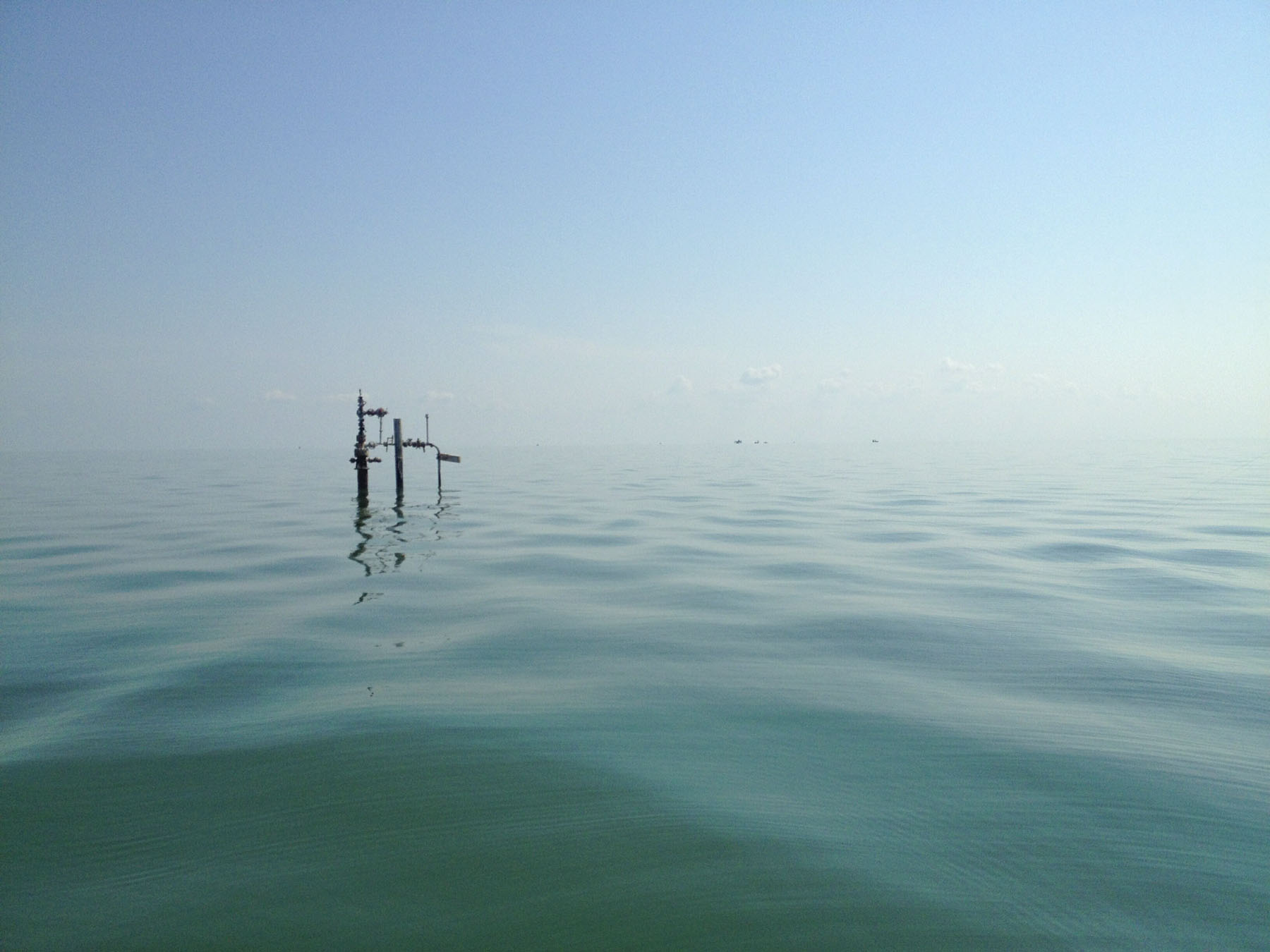 Imagine my surprise when well after well that we visited had no boats on them.
When my son asked me to go fishing with him on a recent Thursday I reminded him that it was the Fourth of July and I don't fish on holidays. When he told me the wind should be calm I became a bit more interested.

Not that I didn't believe him, but I went on and checked the weather forecast anyway, and he was right. The weather people who seldom get it right were saying that there would be a light north wind at about three miles per hour. I hadn't even looked at the forecast prior because I hadn't planned on being anywhere near the bay on Independence Day. But now with my weather app telling me little to no wind I was becoming more than interested Heck, I was getting excited!

I was amazed when we arrived at the boat ramp in that there were only three truck and trailer rigs in the parking lot and I had fully expected to find it packed. We transferred our gear to the boat and were unloaded in no time. It wasn't until I was underway leaving the ramp that another vehicle pulled into the lot.

We were a wee bit early, but I could see well enough that I would be able to avoid any obstructions, so following the bright red track on the GPS, we headed to one of my favorite wading spots in the area.

The thing about this spot and the way the bay system is situated, it's really only fishable with no wind or a light north wind. Since we didn't have any wind at all we were already ahead of the game. So if we had any decent amount of tide movement; we were hoping to have a very good morning.

Twenty minutes later we were setting the anchor and there was bait everywhere, always a good sign. Some of the mullet pods were nervous and that is an even better sign that something toothy was thinking about breakfast. I grabbed two rods, one rigged with a Norton Sand Shad and the other with a Baby Spook in chartreuse and the two of us stepped down into the water. Working parallel we moved slowly towards the shoreline.

A lot of people don't like to carry two rods when they're wading for various reasons but for me it's a lot simpler than constantly tying and retying baits. If I don't get any action on top I can simply reel the bait to the tip of my rod, grab the rod rigged with soft plastic, and replace it with the topwater rod. Packing two rods saves time, saves leader line, and if your wading belt is set up right it's simple and the spare rod doesn't get in your way.

I was a little dismayed that I hadn't had a blowup or a hookup in the hundred yards that we waded approaching the shoreline. But on my first cast that reached the gut nearest the grass my disappointment turned into one of those "Oh Yeah!" moments when the silence of the morning was broken by an angry speckled trout smashing the little surface bait. If you've never heard that sound or seen the explosion a large trout or redfish makes when attacking a floater; you're missing out! Put it on your bucket list.

The trout was a fat 20-incher and I was stringing the fish when Sterling tied into a nice one. The trout must have had a little tarpon or skipjack in her, I guess; she put on an aerobatics display that would rival the best either of those species could muster. And in doing so she was also able to shake loose of the offending lure she had mistaken for a mullet. Undaunted, he cast right back to the same spot and a few twitches later he was rewarded with another hookup. From the bow in his rod and the wake the fish was pushing we both knew it was a strong red and he was going to be busy for a while.

I made more than a few empty casts while moving away from Sterling. One small blowup, but that was it. And then I backlashed. While I picked through the braid to untangle the nasty little loop that was trying my patience, the little lure just sat there about thirty feet away, not so much as a ripple to rock it. And then, just as I was starting to reel the slack line in, another trout hammered the bait. I lost the fish but gained some knowledge. They wanted it slower and they wanted longer pauses on that slick surface than what I had been doing.

I've quoted Mike McBride before and I'll do it again. "Pity the man who tries to figure out what a fish with a brain the size of a pea is thinking."

A couple dozen more empty casts and I switched back to the Norton soft plastic. A look and a sign to Sterling at a hundred yards confirmed he wasn't doing much good either, but I knew the fish were there so we persisted.

I fished the Sand Shad for another thirty minutes with one redfish to show for it when I decided I'd had enough of my honeyhole for that morning and headed back to the boat. With the calm conditions and the few boats on the bay I wanted to hit the mid-bay wells, hoping we'd find some more trout.

Sterling stayed where he was and you can tell by the picture of him taken at maximum zoon on the shoreline; he's a pretty good ways away from me. However, by staying put and also by his body motions, I could tell he was into something good.

He started heading my way about fifteen minutes later with a limit of redfish on his stringer. He handed me his rod and told me to check out the hooks on his plug. Bent, broken and abused is all that I can say and he told me that he'd lost a good fish when the hooks failed him. The lure was right out of the box and he hadn't changed the factory hooks for stouter trebles as we usually do. Another lesson learned.

We put his fish on ice and headed for the bay wells. I still couldn't believe the lack of boats on the water and that most of the wells that usually hold trout had no boats anchored on top of them. We hit our first well and picked up six nice trout in about as many casts each before they stopped biting altogether. We headed to a different well and picked up one, and then to another and caught nothing.

But it was a beautiful day with the bay unbelievably slick-calm, so we did a little exploring and then headed to the ramp to load up and find some lunch before heading home.

I cannot remember a more enjoyable Fourth of July.