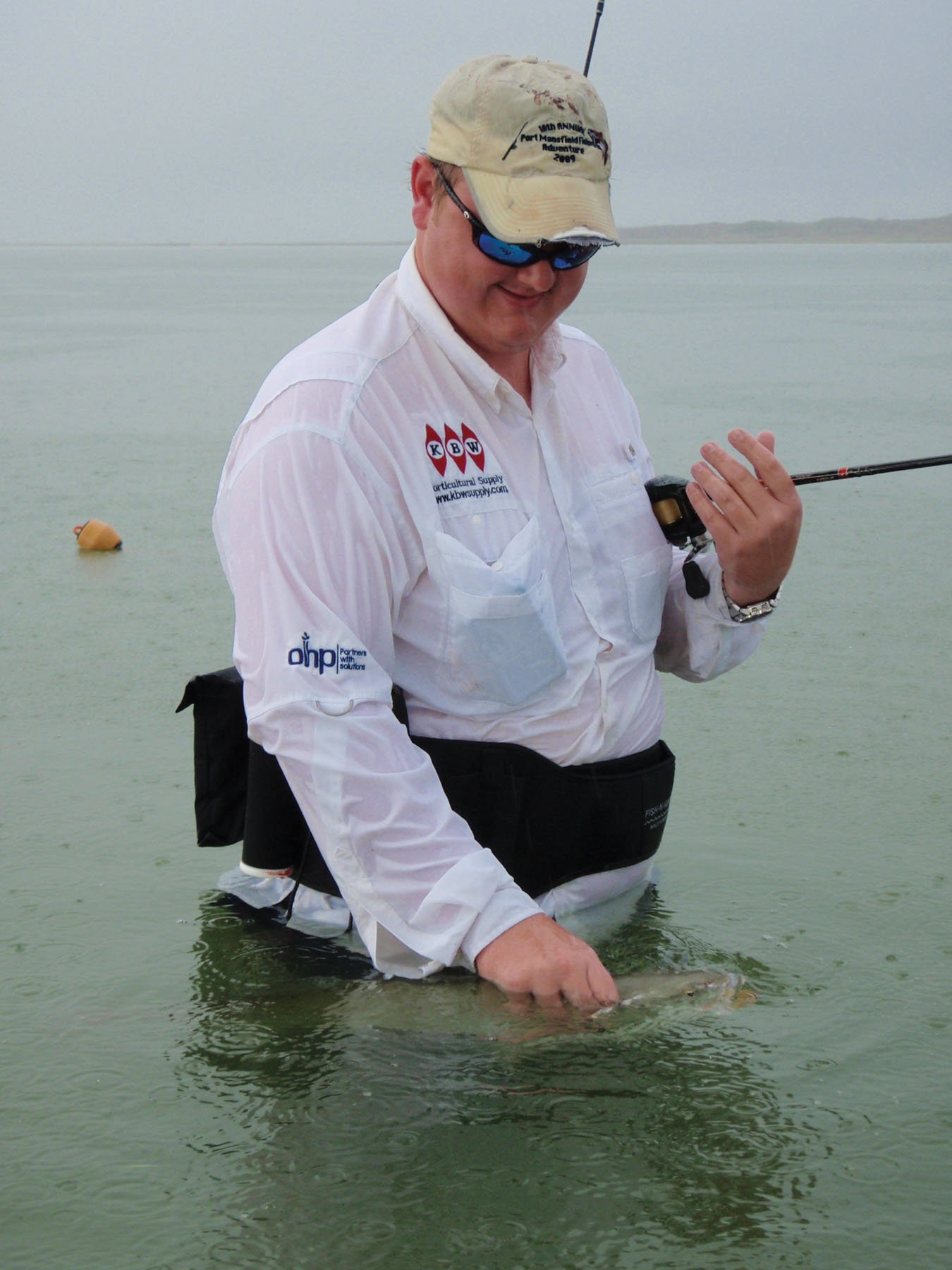 Settin’ her loose to become a ten pounder.

After two recent trips to paradise (Port Mansfield for those who don't already know) I am still amazed at how much the trout fishery has improved over the past few years.

I remember when TPWD announced back in 2007 that a change was coming to the Lower Laguna Madre in the form of new regulations for speckled trout. And naturally, from some, the announcement elicited gasps of shock and prophecies of impending doom.

As for me and my fishing cronies; we simply shrugged and said that it was about time.

The new regulation would reduce the speckled trout daily bag limit in the Lower Laguna Madre (beginning at Marker 21 in the Land Cut and continuing south to include Brazos Santiago Pass) from ten fish to five fish per person per day. TPWD's reasoning was based upon a ten year decline of spawning stock biomass and low recruitment of fingerlings into the fishery.

We all knew something was wrong when we fished down there. Oh we still caught fish, but not like we had in the past. Things were changing and no one who fished that area and considered it the last bastion of hope from the crowded bays further north liked the changes they were seeing.

In a few weeks it will four years since the five fish limit went into effect and what many seasoned anglers are now seeing is a completely different fishery. Don't get me wrong - the fish aren't exactly jumping into the boat or stringing themselves - you still have to put forth some effort to find them, and give them what they want when you do.

A good example would be our most recent trip. It took fully half of our first day to get on solid action, and when we did the fish preferred small topwaters to the exclusion of all other baits including soft plastics go figure that one. But when we finally got in the groove we caught and released a number of twenty-seven to twenty-eight inch trout and we had plenty of eighteen to twenty-fours to keep everybody's attention riveted. And we also caught a bunch of dinks, and a bunch of seventeen inch fryers my personal favorite size for dinner. For several hours there was a trout just about anywhere you threw.

I remember all the hoopla and arguments on the different internet fishing sites; who was for dropping the limit and who was against it. To be honest I was quite amazed reading some of the arguments and reasoning against cutting the bag limit. I mean here we are in the twenty-first century, mature and responsible sportsmen, yet statements such as "It's my right (to keep ten trout per day)" were being spouted left and right. Another that amused me was, I don't see anything wrong with the fishery and I doubt reducing the limit would improve it if there was.

Well, here's what I have to say about that, No it's not your right and yes there was something wrong with the fishery.

The fact of the matter is that were seeing a greatly improved fishery in the Lower Laguna. So what's holding us back from reducing limits and improving the fishery in all the other bay systems?

Seriously folks it doesn't take a marine biologist or a rocket scientist to see what's coming at us if we do not become proactive in the management of our fisheries.

In terms of liberal bag limits and fishing opportunity it seems clear to me that more equals less and if you give it a chance less will add up to a lot more every time.

I hear people whining all the time about the crowded boat ramps, more people and more boats than ever. I hear the same people griping that they're being crowded out of their favorite fishing areas, have given up fishing on Saturday on account of the crowds. Yet these same people will tell you there is no reason to lower the trout limit in their bay. Really? How can you expect to have it both ways?

I believe that every person who purchases a fishing license and saltwater stamp and sets out to catch fish in the bays of our great state should be stewards of the fishery that they are active in.

Seriously, what we do with the fishery will impact what our children, grandchildren and great-grandchildren will inherit from us. I don't mean to tell you that if the daily bag limit is ten that you should only keep five, that's your choice and TPWD is supposed to stay on top of the biology. But what of the little things like releasing undersized fish?

How many times have you seen someone gill hook an undersized trout, redfish, flounder or whatever and simply rip the hook out, gills and all, and toss the dying fish back into the water? It only takes a second to push your hook through the gills, snip the line with a pair of clippers, release the fish to grow up a bit, and then tie the lure back onto your line.

Think of other things that you, as a steward of our fishery, can do to improve what we have. If you see monofilament line floating in the water or lying on the beach do you pick it up and dispose of it properly later? If your leader gets too short and you cut it off to tie on a new one while wade fishing do you stow the excess and throw it away later when you get back to the docks? How do you dispose of your plastic baits; in the trash or trash the water? What about drifting too far into the shallows and then burning donuts to get back on plane. How's that working for those grassbeds?

Remember that it's not just you or me out there on the water, it is us and there are a lot of us out there nowadays. If we don't all do our part, if we can't show that we care enough to take care of what we have, make no mistake, someone will tell us how we are going to take care of it.