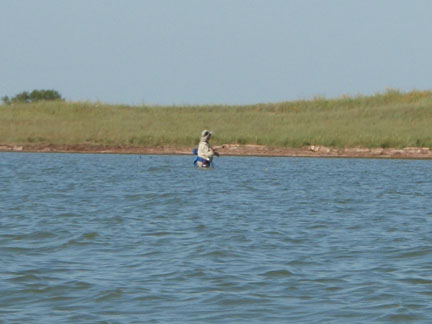 Sometimes, even though you have fishing partners with you out on the water, you just want to slip off by yourself and wade the lonely shoreline.

I watched from a distance as my friend Red Childers did just that this past Friday and I watched him trick some redfish with his gold spoon as he fought the soft bottom.

We had been pre-fishing a tournament in Port Mansfield for a couple of days and had only found scattered fish. The tides were well above normal and some of the places we normally wade were too deep on this trip and some places were actually fresh from recent rains. We couldn’t pattern the fish at all and we didn’t find the numbers or sizes that we were looking for in our usual haunts. We decided that we’d head north a ways on the morning of the tournament and hope that less boat traffic and fishing pressure might pay off for us.

There’s something special about an early morning boat ride and especially on the morning of a tournament. Anticipation is high and everyone seems supercharged and ready to go. The pre-dawn coolness with the wind in your face as you steer the boat to your first destination of the morning keeps everyone fired up and ready.

We arrived at our spot with no other boats in sight and I think we all breathed a sigh of relief. One of the things that you do not want to see at the first area you are going to fish is another boat already there. We idled up to the shoreline, set our anchor, gathered our gear and slipped into the cool water.

Red, his instincts honed by years of wade fishing, saw something that I did not and he immediately headed up shallow. I decided to split the distance from him while Sterling and my friend Glenn headed out deeper.

I saw Red’s fishing rod bent and the arc told me that it was a good fish that had fallen for the gold spoon he was using. I was moving faster than I normally do when I wade; maybe I was just pumped up for the tournament or maybe I wanted to get to a certain gut that I like to fish, but moving too fast cost me a decent fish right off the bat. “Slow down” that little voice told me and I did. I threw my lure to the same area multiple times, did a complete 360 fanning my casts as I did, but whatever had grabbed the bait and taken drag wasn’t falling for that lure again.

On this morning there was no talking between fishermen, no music from the boat radio, no chatter from a VHF radio; only the sounds of bait in the water, an occasional “moo” from the Santa Gertrudis cattle on the King Ranch, and the sounds of my reel as I worked my lure. We were all concentrating on catching the fish we needed that would place us in the winner’s circle at the tournament.

I reached the end of my wade right where the semi-soft bottom becomes a quagmire of mud and muck and I began to fish my way back towards the boat. I stopped for a moment as I felt a fish tap my bait. As I fought the fish I saw Red up in the shallows near the shoreline. After I had strung what was my first fish of the morning, I took the time to take a picture of him on that lonely shoreline.

At the end of our morning wade we had the three fish we were looking for; a redfish, a trout and a flounder. We were eight ounces shy of winning the over-all prize in the tournament. But seriously, we were able to fish together, to spend time together and to visit with each other and with dear friends, which is really what draws us to this particular tournament every year and that is reward enough for me.

Wade fishing isn’t like drift fishing with the guys and girls in the boat having conversations. It’s a solitary thing and it gives you time to think while you hunt the fish that you are after. It’s a time for reflection and for being one with your surroundings. It is an exhilarating experience and if you happen to find a lonely shoreline to fish you’ll remember that experience always.

The lonely shorelines seem to call to you; I guess it is something only a fisherman can understand.

I have a tidbit of news to pass along before closing…I promised Captain Wayne Stark of Port Mansfield that I would include this in my article this month. --Captain Wayne wants everyone to know that the cancer he has been fighting is in complete remission and that he is doing well. He is once again back out on the bays doing what he loves to do; fishing! He wanted me to express his appreciation to all of you who kept him in your thoughts and prayers and that he is very grateful for everything the fishing community did for him.

We sure are glad that you’re doing so well Captain and I can’t wait to sit down and visit with you again soon.