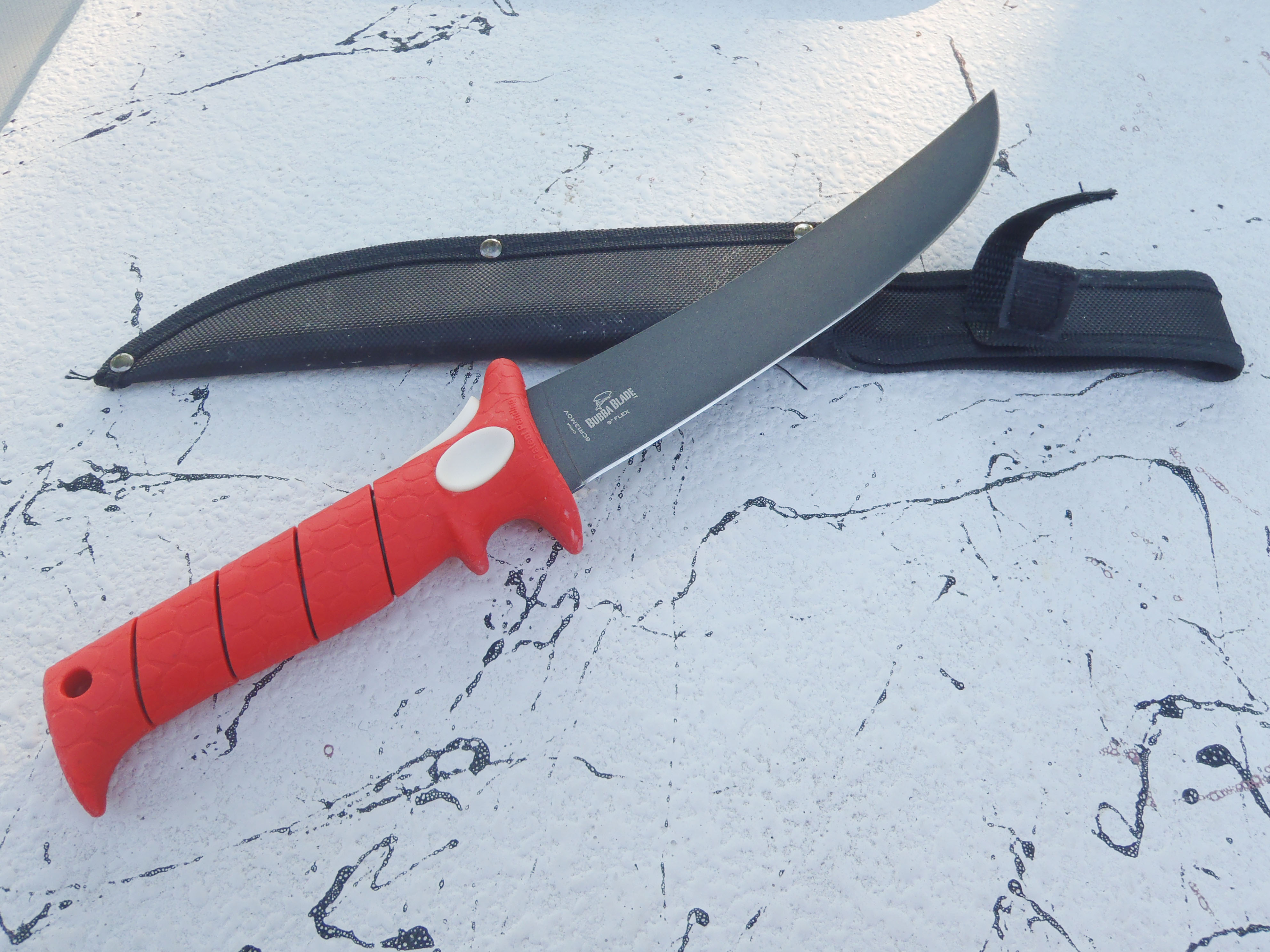 So we were in Port Mansfield taking a break after a morning fishing trip and I was sitting in my favorite and most uncomfortable chair eating a Jimmy Dean sausage and egg croissant and watching television when a commercial interrupted some guy trying to catch big toothy wolf fish out of a no-name river in some God forsaken jungle. I was irritated because as the commercial began I could tell it was going to be one of those infomercials that go on forever and ever and I wanted to see if the wolffish got to eat the fisherman that was trying to catch him.

I can still hear the announcer's voice, "With the Bubba Blade, one cut and you're through!"

Well a little chuckling went through our group as we snickered at the name "Bubba Blade" and naturally comments were made as to whether or not it came with a gimme fishing cap and a can of cheap beer.

But wait a second…look at the way it slices through that tuna! We watched as the Bubba Blade made short work of an untold number of big fish and I made the comment that I'd like to have one to replace my old Rapala blade that has served me so well for so long.

A few weeks later a package arrived addressed to my son and later that evening Sterling handed me an early Father's Day present; my very own Bubba Blade 9-inch flex blade fillet knife. I really didn't realize that the knife I had seen on television was so big or that the handle was so well thought out. What I was holding in my hand was truly a new concept in fillet knives.

Now the Bubba Blade has a Teflon coated blade that protects the blade from corrosion and actually helps it slide through fish. It is made of 8CR13MOV, a high carbon stainless steel with a Rockwell hardness of 56-58. What that means is that the blade can be made incredibly sharp and then holds that edge…a shaving sharp edge, I might add.

The Bubba Blade knife has a full tang which means that the part of the blade that is in the handle goes from the guard to the hilt making for a stronger knife. The handle is unlike any that I've seen on a knife. What the makers of the Bubba Blade did is added a thermoplastic polymer handle and wrapped that with a special synthetic rubber made out of the strongest compounds on the market today. The handle is big and fits my hand well and you can get a good grip on it. It has multiple thumb and finger depressions that allow you to apply different pressures when working the blade. This heat and chemical resistant handle is engineered to stay sticky as it gets wet which gives you a great grip on the knife.

Now the manufacturer states that each knife is hand sharpened to razor sharpness before it leaves the factory but while mine was sharp it wasn't quite that sharp. A few strokes on the crock sticks fixed that though, bringing it shaving sharp with little effort. I couldn't wait to use it on some trout and redfish.

On our next fishing trip I was able to try the Bubba Blade out on trout and reds. It slices through trout effortlessly and it made short work of the redfish; I was impressed as were those who watched me use it. The knife would still shave after filleting a really good mess of trout and redfish…Cool. This thing would take care of zombies with no problem at all.

Now I will say that the blade doesn't flex as easily as fillet knives with smaller blades and people with weak forearms or wrists may find it tough to use on a lot of fish. But for me the knife functions flawlessly and I have no problem bending the blade to adjust to the cut. The handle really gives you leverage and with the thumb pads on all sides of the knife it makes it easy to use.

Unfortunately I didn't get any pictures of that filleting session, but…

This morning we had a light north wind and a quick trip to a protected shoreline found the topwater bite on at dawn. It has been a long time since I was in a feeding frenzy like we found this morning. The trout weren't just blowing up on our baits; they were attacking and trying to assassinate them. None of us took the time to take any pictures of the action although I did take some pictures of the Bubba Blade in action when we got back to the house.

We've been getting a lot of rain lately and the mosquitoes at my house are vicious and blood thirsty so I convinced my wife to let me use her kitchen to fillet some fish and take some pictures. She relented on the condition that I clean the mess up and I quickly agreed.

I cleaned my fish next to the sink and had my son who is not a photographer take a few pictures. Now I know that they do not show you how easily this knife slices through a trout but trust me it does. He also took some pictures of the knife on the deck of the boat so you can get an idea of what it looks like. If you really want to see it in action if you go to www.bubbablade.com you'll find pictures and videos of this fillet knife and a stiff blade knife that they also offer.

Okay my wife said I missed some scales on the edge of her stainless steel sink so I have to go, but check this knife out if you're looking for a really good fillet knife that doesn't need electricity to function. I'll keep using it on fish and will try it on deer when bow season starts.