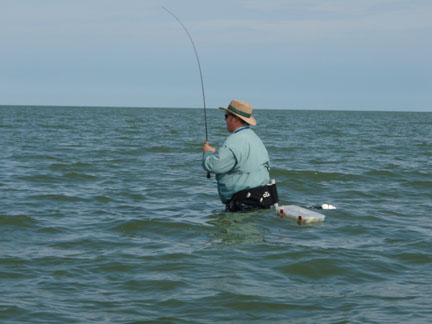 The conditions were perfect and the water was full of big shrimp and small trout.
We'd planned the trip for weeks. Friends, JR Jr. from Beaumont and his dad, JR Sr., of Conroe had a house lined up down at Charlie's Bait Camp on the ICW near Seadrift and they wanted to go fishing. They made the long drive down on Friday and my son and I met them there. Expectations were high since our esteemed Editor and Publisher of this fine publication had told me of a top-secret spot where he had been on good, solid trout. So naturally, that's where we were headed.

We watched it rain for a good while on Friday evening; big thunderstorms that moved in from the gulf came ashore with strong winds and a lot of rain and spectacular lightning that made us glad we were not on the water yet.

We talked to some guys that had been fishing on Friday who told us of a lot of "jelly" in the water and not just cabbage heads either, but those mean little sea nettle jellyfish with the long tentacles that really smart when wrapped around an unprotected leg. I was a tad bit disgusted upon hearing this because I couldn't find my wading pants. I think I left them I at Captain Black's house on Baffin a week or two before. No problem, I would rather wade in shorts anyway and besides, I'm tough.

Saturday morning found everyone up early and ready to go. We set out with high hopes down the ICW towards San Antonio Bay. The waters were trout green and the wind was dead calm. The big thunderheads were way offshore and it looked like we would get a good wade in before any storms ran us back to the docks.

About halfway across the bay Mr. Murphy crawled aboard.

I had no clue. The main oil tank was full but the reserve oil tank on the motor was low. So I did the prudent thing and called that person who sent me down here in the first place, our esteemed Editor and Publisher, and gave him my SOS. He said he'd come and tow us back to the dock and that we might as well fish while we were waiting, so we did.

I was very eager to try out a rod that the boys at Laguna Graphite Rods had given me to field test. I don't have a lot of information on this rod yet but can tell you that it is the lightest and most sensitive Laguna that I have had the pleasure of fishing with to date. Right now the rod is being called a Texas Wader Extreme but it's not in full production at this time. It is very different from any Laguna that I've fished with, as you will notice when you see the pictures. The standard titanium reflex guides are there but the fore grip and the handle are much different from any other Laguna. The new Laguna performed very well with the small trout allowing me to feel them as soon as they touched the Devil Eye lures that I was throwing. I'm impressed to say the least with this new offering from the brothers Neu.

For more information give the boys at Laguna a call at 979-921-9910. I'll have a more detailed report on this rod soon; I just need to fish with it more!

There were shrimp everywhere in the water and a lot of trout that were after them but while the shrimp were large, the trout were small. We had a great time catching them and one of our guests from up north had a hook-up on a topwater that took drag only to have the fish cut him off on the shell bottom. I was wading in shorts and no jellyfish got methings were looking up.

Everett showed up and we tied off to him and he tried to tow us on plane back to the dock; the shallow running Majek had a problem with that though. It wasn't able to get the 24' JHP up and keep it there due to the load on the boat and the motor set for shallow running.

Everett called Sonny Cook at Sonny's Marine in Port O'Connor and told him of our situation. Sonny told Everett that we needed to add oil to the reservoir on the outboard and that the motor would run and get us back to port under our own power. He also said that if I could get to his shop in POC that he would take a look and see if he could get us going so the weekend wouldn't be a wash. I didn't have a spare jug of oil on board but Everett did. We added oil and sure enough I was able to get back to the ramp and load up.

We headed to Port O'Connor and Sonny's Marine.

Sonny got us right in and ran some tests on various things and determined that the oil pump was out and wasn't keeping the transfer tank on the Yamaha full. He replaced the pump and everything tested out and he said we were good to go. He also noticed that the plug on the stern light that is mounted on top of the outboard cowling needed to be replaced and he took care of that as well. After settling up with Sonny we were back on the road but in a driving rainstorm. It rained all the way back to the house.

We had lunch then hit the water again between rain showers. We headed right back to where we had been that morning thinking that with all the bait in the water there the bigger fish had to show up some time. We were right. We slipped into the water and after two or three casts I felt this terrible stinging pain on my left leg and I felt the tentacles wrap around my knee. At about the same time I felt more tentacles wrap around my right leg.

The jellyfish tore me up. I ignored the pain as long as I could but each time I thought that I had it sufficiently under control and started moving again, another tentacle would wrap around my leg bringing additional stinging pain to what I was already feeling.

I got back in the boat and watched everyone else catch fish. Flounder, redfish and trout. I was not happy.

Bad weather was headed our way and we pulled anchor to head back to port. We watched it rain for a while then decided to get some supper and hit it again the next morning in a different spot where the jelly might not be so thick. Did I mention that my legs were still burning? They looked like someone had taken a hypodermic needle and poked me all over.

That night I learned that the stinging could keep you awake but I managed to fall asleep somehow. The other guys stayed up and fished under the lights at the pier. The alarm clock didn't go off, but due to continued discomfort I was awake anyway at a respectable hour and we were off again.

I took us to one of my favorite spots and there was bait in the water. We all got our wading gear on and everyone got out of the boat, everyone except me. I looked down in the water and counted five of the long tentacle jellies swimming next to the boat. On the other side of the boat were three more. Mr. Murphy had come along for this boat ride too.

So there I sat. It's not that I was scared to get out of the boat; it's just that there were those long tentacled stinging creatures in the water and I simply didn't feel like getting stung again. Fool me once shame on you, fool me twice and shame on me.

So there I sat, watching JR Jr. catching fish, and watching Sterling and JR Sr. doing their best to catch fish. Blah. I was so caught up in watching them that I didn't watch behind me and see the weather that was headed our way. When I finally noticed it we didn't have much time to escape the purple and black clouds but we made it back and had the boat on the trailer just as the cold wind hit and the skies opened.

Sterling and I really enjoyed fishing with these two guys. Two father and son teams all fishing and sharing in the ups and downs of the trip made it a great time for me. I hope we get to fish again soon and that Mr. Murphy goes fishing with someone else on that trip.

Back at the house we decided to call it a trip and started packing. When we left it was still raining and it really poured all the way to Ganado when it finally let up some.

Mr. Murphy missed the ride back to El Campo; the rains washed the boat for me but he did get a twinge of revenge. Sterling pointed out that I had my new breathable waders that I could have worn and could have avoided the jellyfish.