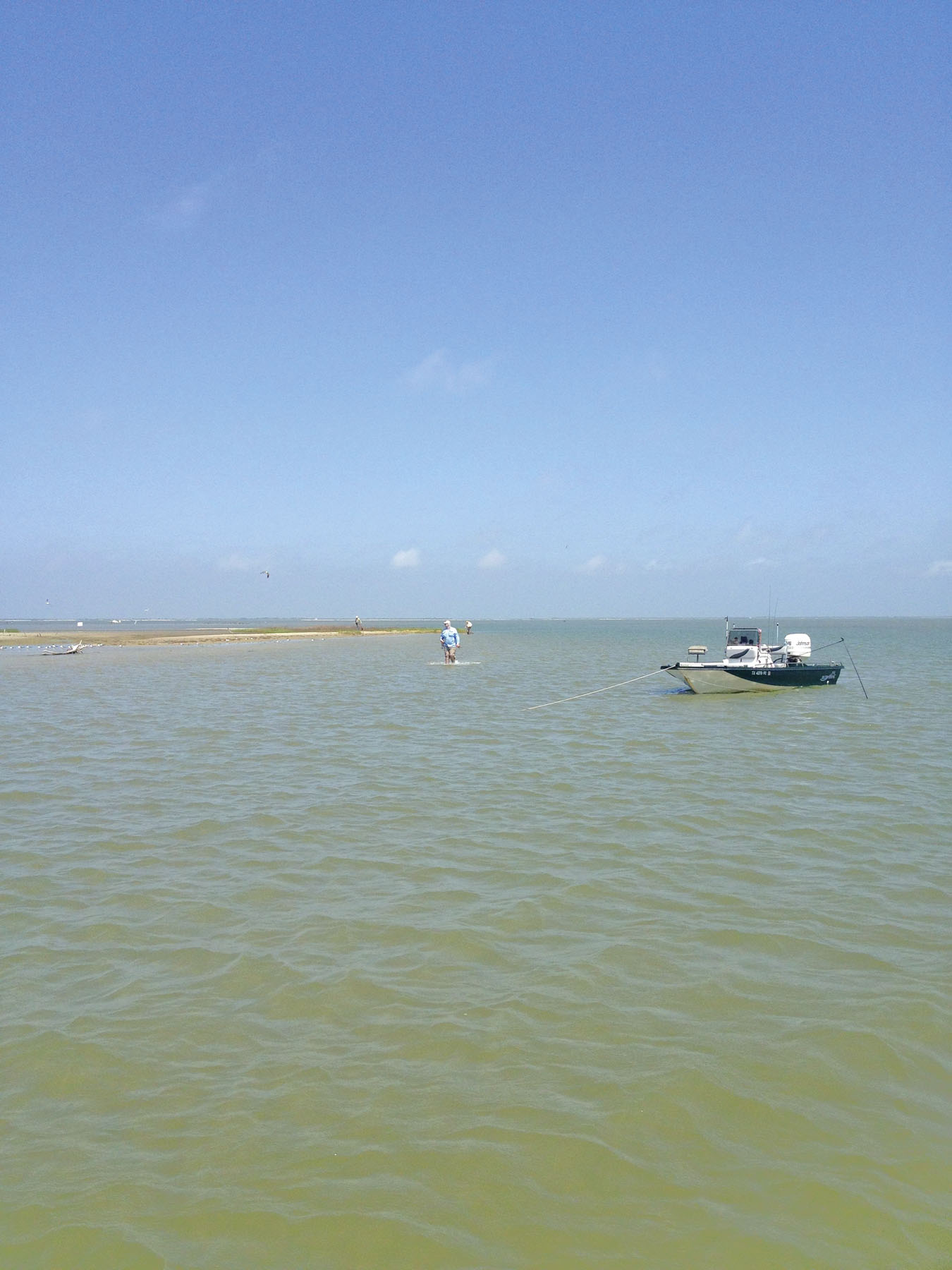 I was a more than a little apprehensive when my friend Keith who lives in Alvin asked us to come down and stay with him for the weekend and fish West Galveston Bay. The closest I'd been to West Bay in the last 40 years was when we when we visited our friend Rebecca at her family's home at Sea Isle and drove across the San Luis Pass toll bridge on our way home.

All kinds of questions flashed through my mind. What kind of bottom will I be wading there; how close to San Luis Pass would we be fishing, where will we unload my boat?

Of course I was just being silly as I love to fish new places but having heard all the stories about how crowded it is up there, etc., I had my doubts and as usual, I was wrong.

We made the drive to Alvin; actually Keith lives between Liverpool and Alvin in the country, on Friday evening and made it safe and sound to Keith's house. We met his wife and daughter then unloaded our bags and fishing gear. After visiting a bit we drove over to Lute's Marina and entered a tournament they were hosting the next day and then headed into Alvin to Kelly's Restaurant for supper.

If you have never eaten at one of Kelly's Restaurants you're missing out. Everything from the service to the quality of food is great but the portions Oh wow the portions will knock you out. Reading the menu I saw that breakfast was served all day so I ordered Kelly's Grand Slam Breakfastdon't do thatunless you can eat a lot more than I can, or just want to have plenty left over for the next day's meal.

The Grand Slam has a huge chicken-fried steak with country gravy, about a pound of homemade hash browns, three large eggs and biscuits or Texas toast. The picture should show you what I'm talking about. I managed to eat the eggs and about a third of the steak, maybe a quarter pound of hash browns and I was done. But I took some really good chicken-fried steak in a to-go box when we left.

Bloated and full to bursting we made it back to Keith's house and rigged up our gear for our morning trip and headed to bed at a decent hour.

Morning found us in the bayou at Lute's waiting on a little daylight but a friend of ours, Gary Koehl was joining us in his boat and he said to follow him, so off we went. Navigating new waters in pre-dawn light isn't one of my favorite things to do but Gary had the water lit up and knew where we were heading. With the wind pumping a steady 15 MPH I wasn't feeling too confident and when you don't have a clue as to where you are other than what the GPS is showing it's a strange feeling to say the least.

Threading the channel in Chocolate Bayou wasn't bad and navigating the buoys to get to the ICW through Chocolate Bay wasn't bad either. But getting in behind Bird Island was a different matter all together. There is a winding and sometimes narrow channel that you have to follow closely or you'll find yourself up on sand and we did run aground once but managed to get back on track to where we were going. We made it to where Keith said to drop anchor just when there was enough light that you could see the landscape fairly well.

There was an incoming tide that to me was moving at a pretty good clip but to the two local guys it was moving slow. The current would make your wading pants flutter as it pushed the water around your legs but the bottom was hard packed sand and my back and my knees were happy. With the anchor set and double checked we followed Keith and Gary to where they were going to school us on how they do things in their backyard.

We learned really fast to stay up on the shallow sand as the guts that we were casting to got really deep, really fast. We fished for an hour or so with no one hooking up and moved a ways across an out of the water sand flat. On that side of the sand flat the channel didn't just drop off into deep water as it did where we had been fishing. It had a subtle slope that got deeper as you waded into it. It was here that we would find some decent fish.

Keith lost a really nice trout right in front of him and I hooked up but lost a head shaker when it spit the lure. Keith strung a fat 17 incher then I lost one that was about 23 when I was trying to put him on my stringer. It was a rookie mistake but I blame the fouled up stringer for my losing that fish and I'm sticking with that story.

Sterling caught a nice flounder and Gary had three flounder, a 20 incher and a couple of smaller ones on his stringer that would end up winning second place in Lute's tournament. Good job Gary. My friend Robert and I zeroed for the morning but I blame the current and the wind. I should have brought some 3/8 ounce lead heads with me because my 1/8 ounce jigs just didn't work for me; heck they and the bait they were threaded into were almost floating. Those are the best excuses that I have at the moment.

By the way, please excuse the iPhone pictures taken from the boat. My camera did it to me again only this time it wasn't the memory card but the fully charged battery that died overnight. Now I have a new memory card AND a new battery.

We were back at the boat for a snack when Sterling noticed a slick pop behind Gary's boat so he grabbed a rod, hopped out of the boat and waded that way. A few minutes later he comes back carrying a 19 inch trout. He hadn't taken anything with him but his rod and reel and was all smiles because we had told him something like, "Good luck, let us know how chasing that slick works out for you." Famous last words, huh?

We made a couple more stops in places foreign to me but the winds had everything messed up and no fish took us up on the lures we cast to them so we headed in.

A quick weigh in at Lute's then to Keith's for a change of clothes and we went back to Lute's to get the tournament results. Like I said, Gary took second place flounder so we were happy for him but no one else did any good; heck Robert and I had nothing in the box so we were pretty quiet.

We went to Gary's for supper at his home on Chocolate Bayou and, much too early after eating a good steak and baked potato, the long day was wearing us down and we headed back to Keith's for a good night's sleep.

I want to go back. I like the area, I want to learn that end of the Galveston Bay System better and we all enjoyed the company and the hospitality of Gary, Keith and his family.

Fishing new bay systems is always exciting and while I didn't bring any fillets home I have some really good memories of a wonderful day on the bay with my son and our friends.