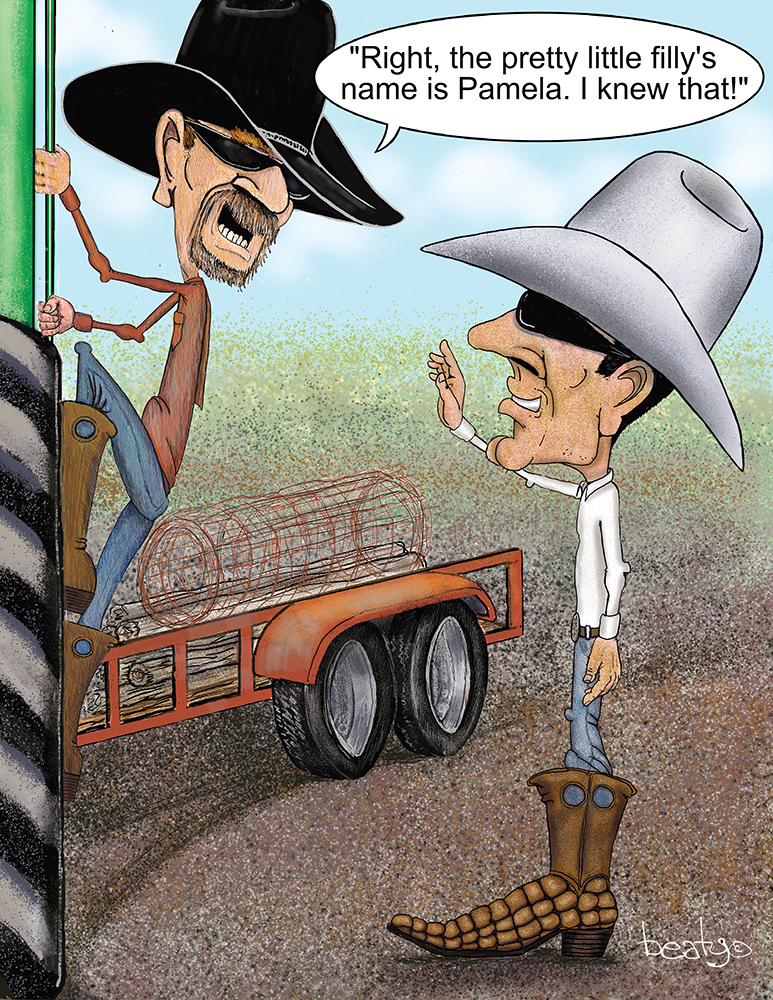 Bodie dressed quietly and carried his boots to the kitchen before slipping them on. He scribbled a note for Pamela, poured a mug of coffee, and quietly slipped out the door. He needed to get to the ranch and review several projects with Monroe and deliver some ranch accounting and other paperwork to Mr. Connor.

Driving to the ranch he prayed she’d understand why he had insisted she sleep in his bedroom while he slept on the couch. She did seem surprised, but then she was a little tipsy. Being a man of old school morals, he wasn’t going to risk messing up their relationship by letting things go too far too soon.

Driving up to the barn he noticed that Monroe already had a trailer loaded with fence posts, wire and fencing tools.

“Never been much of a mind reader, but I certainly try my best to be a top hand,” Monroe grinned as they shook hands. “Actually, Bodie, you mentioned this project last week, and since we just finished running the lines to the new water tank I figured we’d tackle this fence job next.”

Bodie nodded approval and asked if all the regular hands were around to help with the fence building.

“Yes sir, all present but two. I’ve already sent them to clear brush ahead of us in the old fence line. But, to be honest, I really wasn’t sure whether I’d even see you today,” Monroe replied.

“Why would you think that?” Bodie quizzed.

“Well, Tommy’s been running around telling everyone you had that good looking little filly out to your place last night, so I figured you might need to sleep late…you getting to be sort of long in the tooth and all.”

Bodie didn’t reply, just shot him one of those stern looks and turned away.

Realizing he’d struck a nerve, Monroe cleared his throat for effect and told Bodie they really needed to head out and get to work.

As Monroe climbed into the cab of the tractor and the crew leaped aboard the wagon, Bodie yelled to be heard above the engine… “The filly’s name is Pamela!”

“Right! Her name is Pamela; I knew that!” Monroe called back to him.

Bodie waved as Monroe throttled up the big John Deere and headed down the ranch road with his crew. Entering his office, he set about organizing the reports and receipts for ranch supplies he needed to deliver to Mr. Connor. Locking up to leave, his phone rang as he tossed the very worn leather briefcase over to the passenger seat. It was Pamela.

“Well, good morning,” she greeted him. “Guess who just woke up to an empty house?”

“Good morning to you, too! I had to get up pretty early so I let you sleep.”

“You should have gotten me up, Bodie. I would have loved to tag along and see what you do all day.”

“Well, I left at six o’clock and thought that might be too early for you.”

“Oh, thank God you didn’t wake me; the sun’s not even up at that hour,” Pamela giggled. “I found the coffee and the note, which by the way was very sweet.

They chatted a bit as Bodie drove and then she asked, “When do you think you can make it back here? I need to get over to Doug’s place for a change of clothes.”

Bodie told her that he’d be there as soon as he could swing by Mr. Connors home and drop off the reports. He then went on to say that he hoped to make them breakfast before taking her to Doug’s.

Bodie found Pamela in his recliner looking at a photo album. “There’s a lot of good memories in that thing.”

“I find it very fascinating, Bodie. Some of the men in these photos are wearing gun belts and I see rifles in saddle scabbards, like in old western movies,” Pamela replied excitedly.

“That wasn’t actually all that long ago,” Bodie informed her.

Pointing toward the tall young man on horseback, he said, “That’s me right there, and the other guys were hands in the outfit I worked for at that time.

“You’re kidding…that’s you?” Pamela asked in disbelief. “My goodness you’re just a boy!”

“Yep, that’s me. Things were different then. The Brush Country wasn’t exactly a safe place. Nobody I worked with went into the brush unarmed. Now, if you would care to join me in the kitchen, I’ll make us some breakfast. Or, you could just sit here looking at photos of crusty old cowboys, most of whom aren’t even around anymore,” as he flashed his big old Bodie smile.

“Well, I find it all very interesting, and you’re still around, boyfriend.” Pamela beamed back at him.

“Yep. So far so good…girlfriend!”

“I am not. It just a good bit warmer in here than outside. That’s all. Now if you’ll pour us some coffee I’ll get breakfast going.”

“My pleasure, sir. And what is this handsome cowboy chef making for breakfast?”

“How’s about huevos rancheros with bacon, refried beans and homemade tortillas; ever had that?”

“I have not, but I’ll try anything once,” Pamela answered.

“I can promise you, my dear, it’s better than that black pudding you folks eat in England,” Bodie said, holding back a belly laugh.

“Oh, shame on you! Just so you know, I happen to love black pudding.”

They had a good laugh and Pamela refilled coffee mugs and looked over the morning paper as Bodie got busy at the stove.

“So how are the rancher’s eggs coming along?” Pamela asked. Bodie looked at her with surprise and she continued, “Oh, I know a little Spanish, enough to get something to eat and something to drink, sometimes.”

Bodie had everything ready and was keeping it warm while he mixed the masa flour, salt and water for the tortillas. The big cast iron skillet had bacon grease beginning to smoke as he dropped the first ball of dough into it. He figured two of his big tortillas apiece would fill both of them up, with some leftovers for lunch.

“Get it while it’s hot!” Bodie exclaimed, placing the food on the table. Reaching for a bottle of Chipotle hot sauce from the fridge he took a seat next to her.

“So, tell me Bodie, exactly how does one prepare one of these burrito things for eating?”

Bodie smeared a dob of refried beans on a tortilla, added a scoop of egg and chili mixture, and topped it off with two slices of thick-sliced pepper bacon. “This is how I do it. And I top it off with a few splashes of this hot sauce.”

Pamela made her taco the same as Bodie’s and reached for the hot sauce.

“Careful with that stuff, now,” Bodie warned. “It has a pretty good bite to it.”

Pamela smiled and allowed as how she believed she could handle it. She gave the bottle several generous shakes as the fiery liquid fell atop the bacon strips.

“Bodie, this is absolutely delicious!”

Bodie thanked her and watched as she continued chewing. Shortly he noticed sweat beading on her forehead and upper lip. He also noticed her eyes beginning to bulge out.

“Are you okay?” he asked with concern.

“Oh, I’m fine,” she squeaked, and then began choking.

Knowing that she’d gotten a good taste of the Chipotle sauce, Bodie got up and filled a glass with ice water and handed it to her. Pamela nodded her head in thanks, downed it, and handed it back to him.

Unable to speak, she nodded yes with a sense of urgency and immediately downed the second glass.

Wiping her face, and with a few swallows from a third glass, she pointed to the bottle and asked, “Oh my Lord, what in the world is this stuff?”

Bodie explained that it was a family recipe one of his Mexican cowboy friends made for him, and that it was best taken in small doses, until you got used to it.

“Well,” she replied weakly, “I certainly won’t be eating any more of that for a while. Could I please have some orange juice or a glass of milk?”

They finished their breakfast, well, Bodie did. Pamela asked that her second burrito be wrapped in foil to take with her. Bodie told her where to find a new toothbrush in his bathroom and to freshen up while he cleaned the kitchen.

Bodie heard her coming up behind him and as he turned she threw her arms around his neck and gave him a big kiss.

“Well, thank you very much!” he said, blushing brightly.

Bodie blushed and stammered, telling her that they needed to get her back to Doug’s so he could go make a living.

“Oh, Bodie, it’s going to be a wonderful New Year!” Pamela exclaimed as they walked hand in hand to the truck.