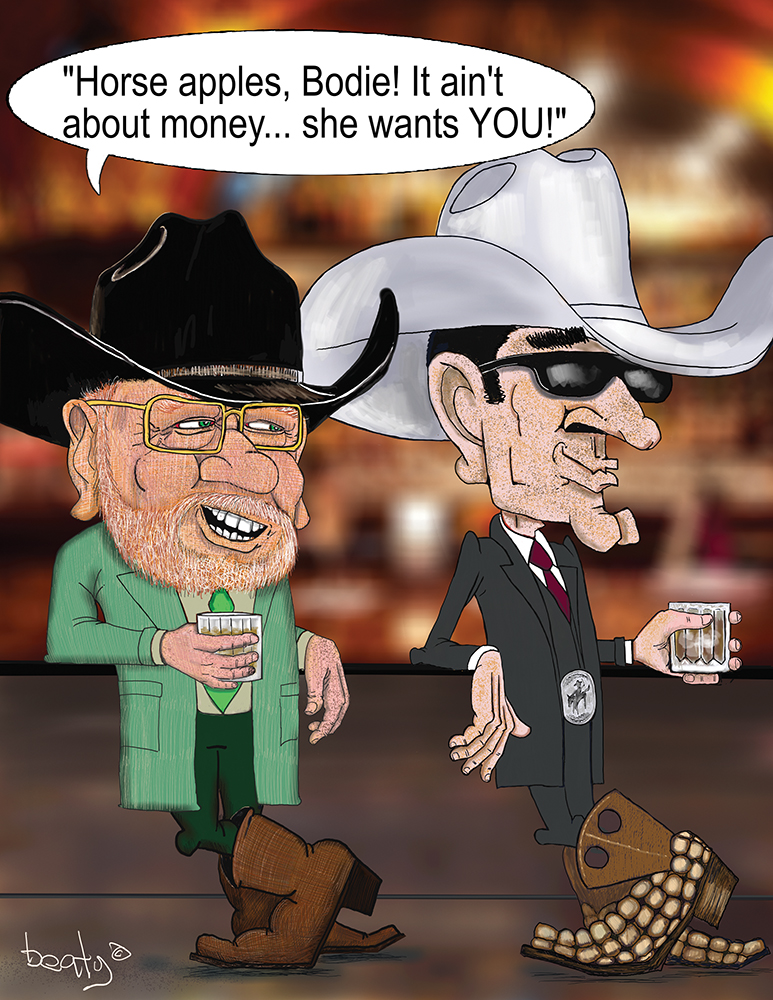 The big New Years Eve party at Doug’s house was definitely big. Bodie estimated more than a hundred people milling about and sipping what he assumed was very expensive Champagne. Pamela looked stunning in what Bodie described as a three-piece suit made for a woman. Tommy and Red both commented on her ensemble with Tommy exclaiming that the top and the slacks might be just a tad tight. Bodie told him to look at something besides Pamela’s top and bottom and they all had a good laugh.

“And just what are you; dare I say it, gentlemen, having such a laugh about?” Pamela asked with a smile.

“Tommy thinks your top and slacks are too tight and show off your figure too much,” Bodie answered.

“And what do you think of my outfit Mr. Allen?”

“I think you’d look great wearing a feed sack; but what do I know about fashion and style?”

“Oh, good answer Bodie, that was very nice of you. And might I say you look very handsome in that suit you are wearing.”

The conversation continued a few minutes until Pamela announced she needed to mingle and for the boys to try and stay out of trouble.

“Bodie, I think she’s a keeper,” Red offered as Pamela walked gracefully away.

“Look here you two, she’s not a trout or redfish that we might keep or throw back. And while I agree with both of you, it’s going to be up to her where this all goes,” Bodie interjected.

Tommy noted that a guy in a white suit had just put out more meatballs and took off for the buffet while Red and Bodie waved off a server offering Champagne and headed for the bar.

“So how’s it going with Pamela?” Red quizzed.

“And what exactly do you mean by that?”

“Well she’s beautiful, she’s smart, she’s friendly, and she’s so easy to get along with. I keep waiting to wake up from this dream.”

“That sounds like a load of horse apples to me,” Red responded. “You’re thinking you don’t deserve her and you don’t have anything to offer her. That’s what’s bothering you, just admit it.”

“Well, Red, what do I have to offer her? My house isn’t going to make the cover of Better Homes and instead of Christmas greetings my bank sends me sympathy cards.”

“Hogwash! You know as well as I do that she probably has more money than you, me, and Tommy put together. It’s not about a fine home, money, or anything material…she wants you, Bodie.”

Bodie nodded as they both ordered a bourbon and walked outside to the pool. Tommy came up to them with a plate piled with meatballs and offered to share.

“You should try these, they are just the best,” he barely managed to squeak with a mouthful. Bodie and Red took one and agreed that they were very good.

Turning away, Tommy let Bodie and Red know the prime rib was due out any minute…“And you sure don’t want to miss that!”

Red asked where he was going and Tommy called over his shoulder …“There’s smoked turkey and little wieners and other stuff up there I haven’t tried yet.”

“I swear that boy eats more than anyone I know and never gains a pound,” Bodie said shaking his head.

“I see you two have found the bourbon,” Doug observed, greeting Bodie and Red.

“Sure did. And Tommy found the hors d’oeuvres.” Red replied.

“You’re right about that, Red. I haven’t seen him anywhere but at the buffet,” Doug chuckled.

“You might need armed guards around the prime rib,” Bodie added.

“Well, if he can eat four thirty-pound bone-in rib roasts he’s welcome to all of it,” Doug replied.

“I want you two to have a good time here this evening,” Doug advised. “The house is yours, make yourself at home, mingle with the guests and try to get to know them.”

“How many of your guests are into fishing and cattle?” Bodie asked.

“Point taken, Bodie,” Doug said with a smile and took his leave.

Pamela walked up to the bar and ordered a vodka tonic. “Okay, I need a break from mingling. What are you two up to?”

“We’re thinking we could go over to Haddon’s for a frosty mug and a chicken-fried steak,” Bodie replied.

“You don’t know how tempting that sounds, Bodie. But while Doug is a friend, he also signs my paycheck; and I do like my paycheck!”

While the three joked about ditching Doug’s party for Haddon’s, Doug walked up and announced he had something to show them. He led down a walkway past the pool into the darkness.

“I knew it. This is where we get fed to the ‘gators,” Red said jokingly.

They all had a good laugh until Doug said, “OK, wait right here,” and stepped away. Within seconds lights came on and they were standing in front of a skeet range with all the stations and a high and low house.

“Well, Doug, I don’t recall this being here. Is it new?” Bodie asked.

“Two weeks start to finish and the crew wrapped up the lighting yesterday!” Doug beamed. “I thought we could have some clay bird fun to help us get ready for next dove season.”

“It’s really nice, Doug,” Red allowed. “But Bodie doesn’t need any practice. If he gets any better with a shotgun I’ll be embarrassed to hunt with him.”

“Aw, come on Red, everybody can use a little practice. And besides, I’m not at all familiar with the skeet game,” Bodie commented.

“No worries about that Bodie. When we are ready to do some shooting the rules are pretty simple.” And with that Doug opened a box and pulled out a wireless remote, pressed a button and the high house threw a bird that was followed by another from the low house. “You can control the throwers with this remote so there is no cord to drag around and trip over.”

Tommy came walking up, gnawing a turkey leg and admiring the skeet setup. “Hey this is cool. I can’t wait to shoot me some skeet.”

“You can’t hit the first dove with a whole box of shells, Tommy. How are you ever going to shoot skeet?” Red snarled.

“I can shoot skeet,” Tommy shot back. “I can beat you any day of the week.”

“Doug, I need you to get us two shotguns and some shells so I can teach this ignorant freak of nature a lesson,” Red proclaimed haughtily.

“Alright, settle down you two. We’re not going to do any shooting tonight with all of these people here,” Bodie glared in his way they knew meant business.

“We’ll have plenty of time to shoot skeet boys, and even if I’m not here, you are always welcome to come out and shoot a round anytime time you like,” Doug assured them. “Just get with me before you do so I can fill you in on how the equipment works.”

Tommy began sulking and walked back toward the main house with Red in tow muttering oaths that would make a sailor blush. Doug, Bodie and Pamela just rolled their eyes while Doug shut the lights down and headed back to the party and his guests.

“Maybe you could teach me how to shoot, Mr. Allen.” Pamela suggested coyly.

“I’d be most happy to teach you. You might even find that you enjoy it.”

Pamela leaned in to give Bodie a quick peck on the cheek but he grabbed her and gave her a real kiss.

“Bodie! What about the guests?” Pamela blurted with surprise.

“Yeah, well, what about ‘em? I won’t be giving them any kisses and neither will you!”