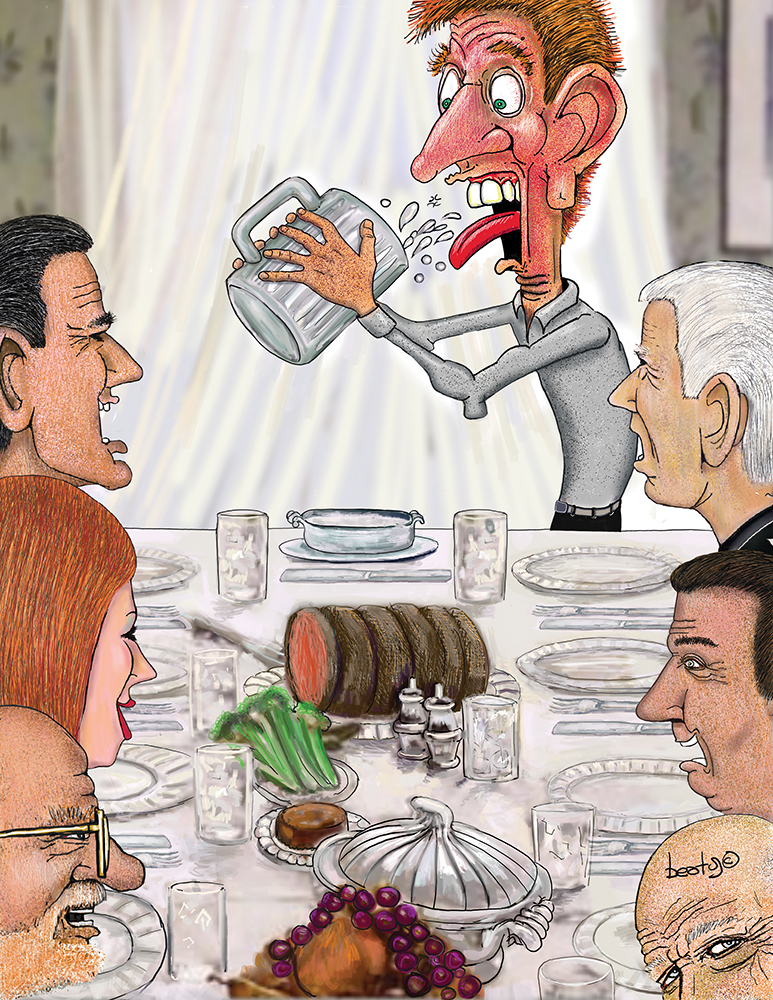 Bodie followed Pamela into the great room and decided to chaperone her through the crowd while waiting for dinner. After a lengthy conversation with a gentleman and his wife, Bodie decided he’d fit in better at the bar. “I may not have a degree on the wall, but if having one causes people to use big words like that I’m glad I don’t,” he muttered to himself.

Red was having his glass refilled when Bodie walked up.

“Red, tell me. What does extrapolate mean?”

“Not sure, Bodie. Maybe extra polite?”

Bodie had his glass refilled and turned to go find Tommy. Turning, he ran headlong into a man standing behind him and his bourbon splashed the man’s shirt and suitcoat.

“Excuse me, sir. I didn’t know anybody was behind me,” he said apologetically, hurriedly reaching for a bar towel.

“You cowboys could use a lesson in manners,” the stranger shot back.

“Well excuse me, but you’re the one crowding me while there’s plenty of space on either side,” Bodie answered.

“Maybe I should just take you outside,” the stranger retorted.

Red got between them to play peacemaker, reminding that they were all Doug’s party guests and the incident should be forgotten.

“Oh, I’ll forget alright. Just as soon as I put a dent in this guy’s head,” the man replied, still wiping his shirt.

“Well, Bodie, I tried. He’s all yours,” Red said with a smile as he walked away.

Bodie extended his hand to the man and said, “I’m Bodie Allen, and again I’m sorry for spilling my drink on you.”

The man tried to slap Bodie’s hand away but Bodie was too quick and grabbed his wrist with his right hand and twisted the man’s arm behind his back. Seizing him by the neck with his other hand, Bodie led him from the bar and out of sight of anyone but the bartender.

Bodie leaned and whispered into the man’s ear while putting more pressure on his neck and arm.

“You have two choices buddy. You can apologize and stay away from me the rest of the evening, or maybe you want to show me what you got,” releasing the man and shoving him away.

The man spun around and made a mean face but Bodie knew he wasn’t going to do anything. Guys like that are always more talk than fight.

The man massaged his arm and the back of his neck, glared at Bodie, and stomped back into the mansion.

“Well then, I thought that went quite well,” Doug announced from the shadows.

“How long have you been watching?” Bodie asked.

“Oh, I noticed that little incident at the bar,” Doug replied. “Knowing that man as I do I thought there might be trouble.”

“Oh, no trouble at all,” Bodie grinned, straightening his tie.

“Well then, Bodie. What say we get you another glass and rejoin the party.”

“I’ll take some more champagne!” Tommy called from the shadows as he stepped out and handed Doug a croquet mallet.

“Where did you…what were you going to do with this?” Doug asked.

“Well, if that guy tried to get tough with Bodie I was gonna whomp him with it.”

Doug just stared with his mouth open, not sure what to say, and Tommy told him a moth was going to fly in there.

Doug began a belly laugh and Bodie and Tommy joined in. Just then more laughter erupted from the darkness as Red stepped from the shadows and handed Doug a pool cue. “Might as well put this away with Tommy’s mallet,” Red replied with a wink.

“We sort of take care of each other, Doug,” Bodie allowed between guffaws.

The call for dinner came and Doug announced each guest would find a name card at the place settings. Pamela found hers, Bodie was next to her, and Tommy and Red were paired up.

“Bodie, I was hoping I wouldn’t have to sit next to Tommy,” Red whispered.

“Oh, come on Red, why not?” Bodie whispered back.

“Because his table manners are awful and he splashes food when he eats,” Red whispered again.

Bodie thought for a second and leaned across the table. In a soft but stern voice he said, “Tommy, use your best manners, and don’t splash food on Red while you’re eating.”

Doug was at the head clinking a glass for the group’s attention as he welcomed everybody and expressed hope that they were enjoying the evening. Waiters and servers flew about the room, “Like a flock of geese flying into a spread,” as Bodie put it.

The servers put generous portions of prime rib on all the plates along with baked potatoes, some kind of seasoned carrots, and bacon-roasted Brussels sprouts.

Bodie whispered to Pamela, “I don’t like Brussels sprouts.”

Pamela whispered back, “Don’t eat them.”

Bodie whispered back, “Then don’t eat them.”

Tommy set about mashing his potato with a fork and when he was satisfied he began lathering it generously with whipped butter from a silver dish in front of him.

Bodie commented to Pamela that the prime rib was delicious, well-seasoned and perfect medium rare. Pamela agreed and was about to make another comment when Tommy suddenly bolted from his seat, his fork flying as he grasped a pitcher of iced water from a waiter and began guzzling.

Startled, Bodie jumped up to see what in the world was the matter but couldn’t get Tommy to stop gulping water long enough to say anything. Some of the guests were horrified, some were laughing, others only stared.

Tommy finally handed the pitcher back to the waiter as Doug made his way to them.

“What’s the matter, Tommy, are you okay?” Doug asked, concerned.

“Doug, you need to go fire whichever cook made that butter because it’s the hottest thing I ever ate in my whole life. That stuff will bite you!” Tommy exclaimed, looking for another pitcher.

Pointing to the small silver tray, of which there were many on the table, “That butter, that fancy whipped butter,” Tommy managed to choke between gasps.

The room went silent until a raucous burst of laughter rang out. Still without a clue as to the nature of Tommy’s problem, Bodie and Red stared with their mouths agape at the spectacle before them. Doug was doubled in laughter, so much that he clung to a chair to stay on his feet.

“Well I don’t know what’s so funny, Doug. That stuff can hurt someone,” Tommy cried as the guests erupted in another wave of laughter.

Still bewildered, Bodie asked Doug what was so funny. Doug finally composed himself and said, “Bodie, that’s not butter, that’s horseradish for the prime rib, and it’s very spicy at that!”

Tommy turned beet red and sat back down while most of the guests continued laughing at his expense. Bodie and Red managed to not laugh out loud, finally picking up on what had happened. Pamela remarked later that she almost bit a hole in her lip trying not to laugh. Tommy asked for a fresh potato and a server brought one as everything eventually settled back down and the meal continued.

“I sure hope we get invited back to Doug’s next party after all this mess,” Bodie whispered to Pamela.

“Oh, trust me, you will. Entertainment like Tommy is hard to find, and very expensive if you can,” Pamela chuckled.

Dessert was served, New York cheese cake with fresh blueberries, carrot cake, red velvet cake, and a huge German chocolate cake. The waiters asked what each guest preferred and a server brought it to them. Bodie went with the carrot cake, Red wanted the red velvet, and Pamela wanted the German chocolate. Tommy asked for a slice of each and the servers brought it dutifully.

Following dessert, most of the guests moved back to the great room while Bodie and Pamela found a sofa and talked a while.

“I feel so out of place at parties like this,” Bodie lamented.

“Why would you feel that way?” she questioned.

“Well, in case you didn’t notice; I don’t own a tuxedo. I don’t own an airplane, and I can’t carry a conversation with people who use words I’ve never heard,” Bodie replied.

“Yeah, I know, it’s silly. Red told me the same thing. I just feel so out of place in company like this.”

“Just remember who you are, Bodie. And remember that nobody here can ride a horse and rope calves, they couldn’t catch a fish nor clean one if they did, much less a deer or other large game animal. You’re my cowboy and that’s all that is important to me.”

Doug announced the fireworks show was about to begin and the guests all began to drift outside toward the pool. The show was spectacular. Bodie allowed that he’d never seen anything that could touch it. At the stroke of midnight the biggest explosion of all shot sparklers out for a hundred yards. Everybody cheered and couples kissed, including Bodie and Pamela. All the guests and staff joined in a chorus of Auld Lang Syne.

Bodie was ready to go home and said as much to Pamela, who replied, “Me too. Let’s thank Doug and say goodbye. I’ll grab my purse and jacket and I’ll ride gun for you.”

“Uh, would that be shotgun? You want to ride shotgun, my dear?” Bodie asked with a chuckle.

“Yes, whatever it’s called. I want to ride it,” she cooed.

They thanked Doug for everything and with Tommy and Red in tow they headed out the door to the driveway. Bodie and Pamela said goodnight to the boys as Bodie held the truck door open for her.

Arriving home, Bodie went to his bedroom and came out carrying a pillow and blanket.

“And just where do you think you’re going with those things, Mr. Allen?” Pamela asked smartly.

“Just getting my bed ready on the sofa,” he replied.

“Oh, no sir. Not tonight, Mr. Allen. Tonight we sleep together in your bed or you can take me back to Doug’s house, right now!”