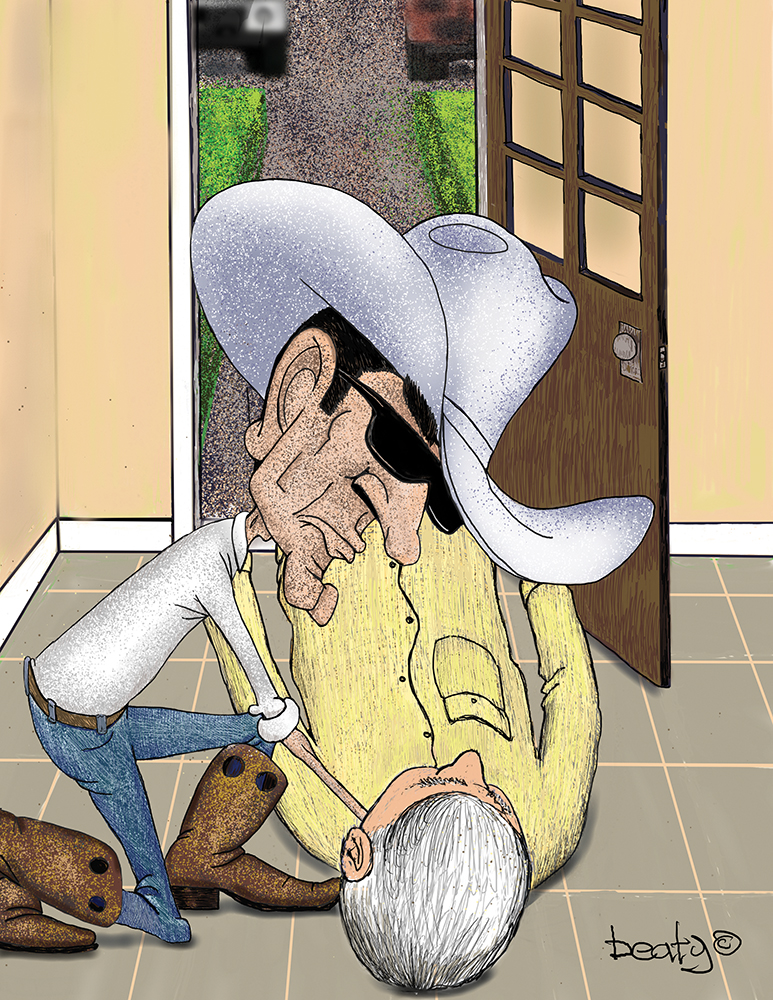 Bodie awoke and slipped quietly out of bed to avoid waking Pamela. He grabbed a pair of jeans, a shirt, and his work boots and closed the door silently behind him. Dressing in the kitchen while his coffee was brewing gave opportunity to reflect on what was happening in his life.

“Well I guess I should just go on and admit that I’m in love with her… and stop trying to make excuses about it,” he thought aloud.

“Now why would you want to make excuses about loving a woman who is in love with you, Mr. Allen?”

Her voice startled him and he whirled as she was about to take a seat at the kitchen table. The sight of her wearing only his shirt from the night before made his heart flutter.

“I reckon I never dreamed a woman as beautiful, classy, and smart as you would ever have romantic feelings for a rough old cowboy like me. But…after last night, I know it’s true and it makes me very happy.”

Pamela flashed a smile as big as Texas and Bodie tried to apologize for waking her so early.

“Oh, you didn’t wake me, Bodie. I knew you would be up early to go to the ranch, even though it’s New Year’s Day. I wanted to see you before you left,” Pamela announced smugly as she stood on her tiptoes to give him a kiss on the cheek.

Bodie pulled two mugs from the cupboard but Pamela said she wasn’t ready yet. She was going back to bed as soon as he left.

Pouring his big insulated mug full of the steaming liquid and snapping the lid, he turned back to her and said, “Well, my dear, I’m leaving right now so you can go jump right back into bed before you catch your death of cold.”

Pamela smiled and gave him another quick peck on the cheek as she headed toward the bedroom hallway. Turning at the doorway she let the shirt fall to the floor and asked if it was really necessary that he leave her all alone on such a chilly morning. Bodie did his best to stammer that even though he’d love to stay he really needed to get to work.

“Well, she either loves me or she’s trying to give me a heart attack,” he mused as he climbed into the truck and cranked the engine.

It didn’t matter whether he was heading across the bay, sitting in a deer blind, or saddling up to check cattle, sunrise was always Bodie’s favorite time of day.

Arriving at the ranch he went to his office to go over some projects he needed to get organized. He was quiet to not wake Monroe next door so early on New Year’s morning and started a fresh pot of coffee. He was shuffling a stack of supply orders that needed to be placed when the door opened and Monroe stumbled in – shirt, boots, and hat in hand.

“Morning, Monroe. I tried not to make a racket and wake you.”

“You didn’t wake me, Bodie. I haven’t even gone to bed yet,” Monroe quipped to his boss man. “Now Betty Ann, I doubt you could wake her if you tried. She’s plumb tuckered out from dancing all night.”

Bodie smiled at that and told Monroe to pour them some coffee and have a seat to go over some ranch business.

Monroe brought the coffee and sat across from Bodie who pushed a stack of papers across the desk. “Can you read through those bloodshot eyes?” he asked.

“I think I can manage, long as I keep my left eye closed,” Monroe joked.

Bodie went over everything that needed to be done the next day and then wrote checks for the outfit that would be hauling cattle to the sale barn for them. He reminded Monroe to call Bobby Johnson and let him know they wanted the old railroad rails he had for sale to build two more cattle guards, and then asked him to check if Bobby could deliver them.

It was almost 8:00 when the two finished their business. Stepping outside, the norther that had been predicted had arrived and the temperature was already much cooler. Bodie went to grab a jacket out of his truck and Monroe went to get one from his house.

“Well, I woke Betty Ann up,” Monroe said with a grin.

“Fat chance! All she did was roll over and tell me to hurry and bring her coffee,” Monroe replied with an eyeroll.

“Well then take her a cup from the office and let’s go have a look at the cows we penned for those boys to haul tomorrow.”

They jumped into Bodie’s truck and drove to the loading pens. “That’s a good looking bunch of cattle,” Bodie remarked.

“Yes sir, we do have us some good stock,” Monroe agreed.

“We do at that Monroe; and it’s good hands like you and the rest of the crew who make it happen,” Bodie replied, reaching inside the center console.

Bodie extended his hand and wished him a happy New Year as he handed him an envelope with his name on it. Monroe jokingly asked if it was his walking papers.

Bodie laughed and told him to open it. Monroe’s eyes grew wide as he stared in surprise. “Wow! That’s a pretty big check, Boss,” Monroe announced with a catch in his voice.

“It is that, and you deserve every penny for all you do to make this one of the most successful ranches of its size in this part of the country,” Bodie assured him.

“Thank you very much, Bodie. And please tell Mr. Connor I thank him as well for his generosity,” Monroe stammered emotionally.

Bodie slapped him on the back and handed him a stack of envelopes, each with the name of one of their regular hands across the face. “Pass these out when the boys get up and moving. And please tell them how much Mr. Connor and I appreciate their hard work.”

“I sure will, Bodie. And I know they’ll all thank you later,” Monroe replied.

Bodie dropped Monroe at his house and told him to give Betty Ann his best regards before driving off to check a stretch of fence on the far end of the ranch. The weather app on his phone chimed with news of freezing temperatures expected overnight and he called Monroe to remind him to check that all the water trough piping was wrapped properly.

Surveying the fence that stretched along the northern ranch border, Bodie noted that most of it would need replacing come springtime. Just then his phone rang and he saw that it was Pamela calling.

“No, my dear, I’m not cooking breakfast this morning, but I’ll bring something home for us,” he joked in greeting.

Her tone was serious…“Bodie, Doug just called and I have to accompany him to Europe. There is a labor problem at one of his plants and he wants to leave within the hour if possible.”

Bodie looked at his watch and knew he wouldn’t make it home that soon. “Pamela,  I’m a pretty good ways off in the middle of a pasture and I don’t think I can make it that quick, much less get you over to Doug’s house in an hour.”

“It’s not a problem, my love. Doug’s already taken care of it. He is sending a car to take me to his house so I can pack and head to the airport with him….Oh, the car just pulled up. I love you and I’ll call you soon. Goodbye.” She hung up before he could say anything.

The news made him sad and somehow the fence he’d come to inspect didn’t seem important. Well, I guess I know now what love is, he muttered aloud. And I know my bed is going to be a whole lot colder until she gets back.

With no reason to hurry home, Bodie thought it would be a good idea to drive out to Mr. Connor’s house and wish his boss and Lazy C owner a Happy New Year. Winding down the long paved driveway and stepping out of the truck, he was mobbed by several happy Labs and a pair of excited beagles.

Bodie found the back door of Mr. Connor’s house ajar, which he thought strange. He called loudly and when no answer came he cautiously pushed the door open and saw his boss and longtime friend lying on the floor of the entry hall with his cell phone next to him.

Bodie immediately grabbed his own phone from his pocket and dialed 911 to request that an ambulance and a deputy be dispatched ASAP. He knew before checking for a pulse that the kind old rancher had been dead for more than a few hours. He had seen death many times and knew what it looked like.

Seeing no signs of a struggle, blood, or visible wounds, but unsure whether there might have been some kind of foul play, Bodie backed carefully out the way he’d entered the hallway to avoid disturbing any evidence. He then dialed the sheriff’s office and requested a forensics team also be dispatched.

Bodie went to his truck, pinned on his deputy sheriff’s badge, slumped over the steering wheel and wept sorrowfully.