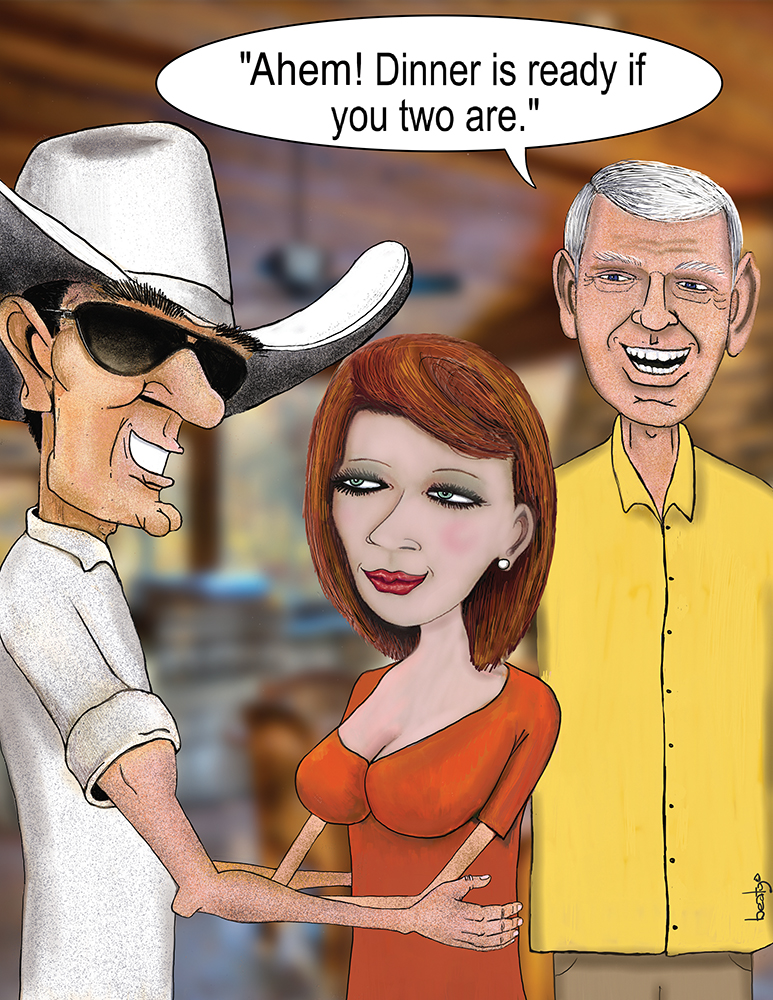 Bodie met Pamela at Doug Sellers home and the three of them had dinner together. New Year’s Eve was coming on fast and Bodie wanted to know exactly what kind of party Doug was planning on having.

“Doug, just what kind of soirée are you planning for New Year’s Eve?” Bodie asked his friend.

“Why, Bodie, I didn’t know you spoke French,” Doug replied with a grin.

“Actually, Doug, I don’t. I heard it in a movie and had to ask someone what it meant,” Bodie chuckled.

“Nothing too big or too special, Bodie. I have invited a few friends for a couple days of rest and relaxation. We’ll bring in the New Year with good bourbon, scotch, champagne, and wine. And we’ll eat quite well, too.”

“Might want to include a few Dos Equis, Doug. I mean someone might want one or two, or even three,” Bodie winked.

“I do hope a 16 gallon keg will take care of any of my guests’ needs,” Doug chortled.

“Well I have that nice suit that I wore to England, but if it’s one of those affairs where a tuxedo is necessary, black tie I think is what it’s called, I’ll stay in the kitchen with the cooks,” Bodie joked.

“Casual is the theme, my friend. Dress as you do daily, be comfortable and have a good time,” Doug replied as his cell phone started ringing. “Excuse me folks, I need to take this call.”

“Well, I hoped that between now and Monday you might have some time for me to show you around and maybe even take you fishing if the weather cooperates. I’m also hoping you will be my date for Doug’s big party.”

“I’m off until the seventh of January, Bodie. And, according to Doug, I can spend all of that time off with you. That is if you don’t’ mind my company,” Pamela teased.

“Well by gosh that’s the best news I’ve had since I got home from England!” Bodie blurted.

The two walked across the large den and through the double doors to the pool area, continuing to talk about anything and everything that came to mind. Bodie rattled off his life as did Pamela, they discussed likes and dislikes, the type of people they enjoyed being around and then Pamela told Bodie, “I do especially enjoy being around you, Bodie.”

His stomach was all butterflies and his heart pounded in his chest. He couldn’t remember anything like it since his teen years. He reached for her hand and pulling her close they shared their first real kiss. The moment seemed to go on forever, and may well have, had Doug not appeared.

Doug cleared his throat as he approached…“Ah hem! I’m informed by the kitchen staff that dinner is ready if you are, and, well, maybe you’re not just yet at that.”

The three laughed heartily at that and Bodie, with his arm around Pamela’s waist, showed her back inside to the dining room.

Dinner was fun. Bodie even liked the food he didn’t recognize and probably joined in more conversation than he ever had in a single setting. The sound of Pamela’s laugh rang in his ears and he even liked the wine that was served with the prime rib. He could not recall being as happy without being horseback, on a fishing boat, or sitting in a South Texas deer blind.

“Surely I can’t be falling in love with this woman,” Bodie thought.

“No, son, you’re not falling in love. You’re already in love,” his subconscious answered.

“Folks, I have a conference call early in the morning so I’m going to call it a night. You two may continue to enjoy yourselves, help yourself to anything you need. The pool is heated and there are trunks in the cabana that you may use, Bodie,” Doug announced in excusing himself from the table.

“Doug, will you need me in the morning?” Pamela asked.

“You’re completely off duty my dear, so there will be no call for you in the morning,” Doug called in leaving.

“Bodie, I’d love to get to know you better. How about we take a ride and you show me your home,” Pamela suggested.

Bodie didn’t reply right away, trying frantically to remember whether he might have left underwear in the bathroom, and whether the dishes were done up properly.

Pamela sensed the hesitation and said, “Well if you’d rather not, or this isn’t a good time, I would understand completely.”

“No, no, nothing of the sort. I’d love to show you my home. But please keep in mind on the way out there that it’s nothing like this place,” Bodie offered almost apologetically.

“Well, let me say this, Mr. Bodie Allen,” Pamela exclaimed. “If it were anything like this place you wouldn’t be the interesting man that you are.”

Bodie and Pamela walked to his truck. As he opened the passenger door for her a box of .45 ACP ammo fell to the ground and he bent down quickly to grab it. “Sorry,” he explained. “I didn’t expect anyone to be riding with me. And, uh, don’t touch that rifle between the seats. It’s loaded and ready to go.”

Pamela began to smile; noticing the stuff in Bodie’s truck. The rifle, the ammo boxes on the dash, the lariat coiled over the headrest of the driver’s seat, the chaps and spurs in the back seat. “I think I’m going to love your home,” she said softly as he closed the door for her.

Bodie was so excited that he banged his shin on the trailer hitch walking behind the truck. It hurt like the dickens but he kept a smile on his face as he climbed in and carefully laid the rifle on the floorboard behind.

Conversation flowed easily during the drive to Bodie’s place, almost as though they’d known each other all their lives.

“Texas must seem like another world; you being from the U.K., and all,” Bodie remarked.

“This entire United States is like another world to me Bodie, and I’m enjoying every minute of it. The expanse of the country and the freedoms you enjoy. You would never find all this cowboy gear and a loaded rifle in the front seat of a vehicle in the UK!”

Bodie turned into his property and was driving up to the house when his lights reflected on another vehicle’s taillights. Instinctively he reached with his right hand and retrieved the Colt 1911 tucked between his seat and the console. “Looks as though somebody is making a visit to my house this evening,” he announced with concern.

“Are you expecting company?” Pamela asked.

“No ma’am,” he answered, just as the headlights shone fully on the truck at the house and he recognized it instantly as Tommy’s. “It’s Tommy’s truck, you met him when we came to London. He can be about a half bubble off plumb sometimes.”

“A half bubble off of what?” Pamela asked.

“Sorry, it’s an old country-folk expression for someone who is made up a bit different than most other folks,” Bodie explained jokingly.

“Well I must say that is a wonderful description of Tommy!” she replied.

Bodie was about to open Pamela’s door when Tommy came out of the house carrying two trash bags.

“Bodie!!” Tommy yelled. “I came by to clean up a bit for you in case you brought your girlfriend Pamela over.”

Bodie just shook his head and opened the passenger door to help Pamela down.

“You DID bring your girlfriend to your house!” Tommy said excitedly.

“Your girlfriend, I like that,” Pamela said with a sly wink.

Bodie blushed and stepped aside to allow Pamela and Tommy to hug and say hello.

“I thought Bodie would sneak you over, so I thought I’d better come out and tidy up a bit. He’s a cowboy and he fishes and stuff like that…so he’s a little messy.”

“Oh, is he indeed?” Pamela asked while smiling broadly at Bodie.

Bodie gave Tommy one of those “looks” which made him clear his throat and beg his leave.

“Sure was nice seeing you again Pamela. I’d love to stay a while but I have to run. You two have fun and I hope to see you again soon.” Tommy was in his truck and down the drive in a flash.

“Well what on earth got into him, leaving so quickly?” Pamela asked.

“Oh, he’s just quirky that way,” was all Bodie had to say.

“Well, Pamela, it isn’t much but it’s my home and it’s paid for,” Bodie said as he opened the door for her.

Pamela walked in and gazed around, looking at the kitchen and the den with the fireplace and the well-worn leather couch and chairs. “It has you written all over it, Bodie Allen.”

“Now, kind sir, if you’ll direct me to the bathroom while you pour us a drink or open a couple of beers, I’d be most appreciative,” Pamela smiled at her date.

Bodie showed her down the hallway to the bathroom and switched on the light for her. “All yours, ma’am” he said as he turned and went to the kitchen to make drinks.

Bodie carried the drinks into the den and placed them on the coffee table, taking a seat on the couch to wait for Pamela to return. “Well, not much has changed,” he mused to himself. “Women still spend too much time in the bathroom.”

Ten minutes passed as Bodie called down the hallway, “Pamela, are you okay? Do you need anything?”

A few seconds later she came into the living room wearing one of Bodies snap-button Wrangler work shirts and, from what he could tell, nothing else. The sight was beyond incredible as bolted up from the couch.

“I, I ah, I poured us a drink,” he stammered as Pamela accepted the glass and slid close beside him on the couch.

“I think you’re going to be a wonderful boyfriend, Mr. Bodie Allen,” she cooed in his ear.