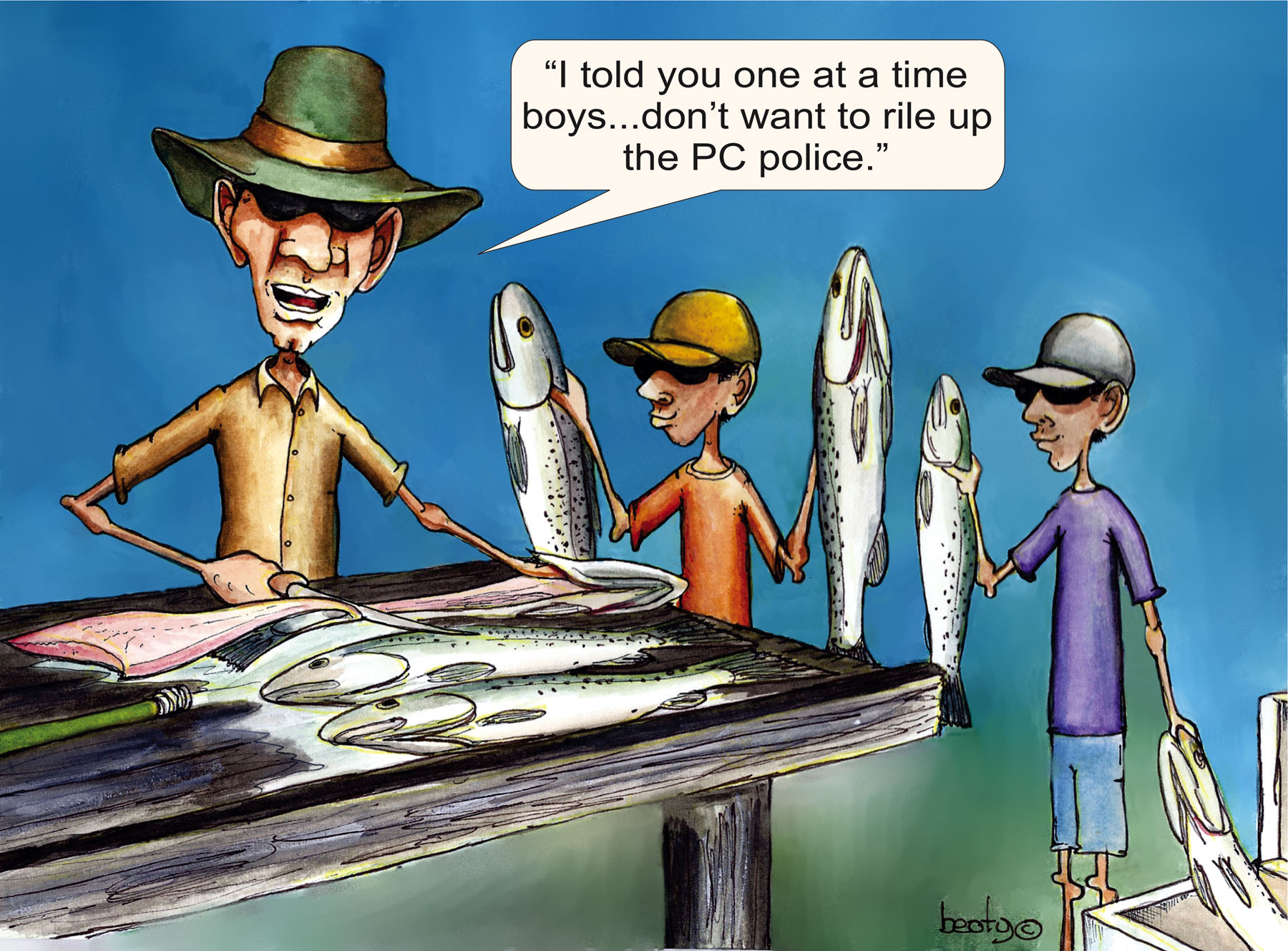 I read about it in the newspapers. I hear it on the evening news. I read about it on Internet chat boards and I endure conversations about it when I can't get away fast enough. "PC" or political correctness just goes against my way of thinking and I hate to see that it is so prevalent now days in fishing.

Once upon a time it was a pleasure for folks to escape for a morning or afternoon of fishing. They'd unload their boat, hit the bait camp for a quart of live shrimp and spend the morning free shrimping for trout at the bay wells or catching fish under a popping cork over shell reefs. Or, if artificial baits were more to their liking, they'd plug for their fish and enjoy the day much the same as the bait fishermen. Afterwards they'd bring their catch to the dock and clean them, laughing and having a good time visiting with other fishermen and sharing bits of information about how, when and where. Not so much anymore or so it seems.

I witnessed not long ago something that burns me up still. A young couple had pulled their boat and trailer up to a public cleaning table and was carrying their cooler down to the table to go to work. We had finished filleting our fish and were washing down the area when they walked up.

They didn't start unloading their catch, they just sort of waited around and since I didn't notice a fillet knife in either of their hands I asked if they would like to use mine. They looked at each other and said they were just waiting on us to leave. I told them that there was plenty of room and that I just wanted to leave the table clean for them.

They looked at each other again and she finally told me that they were embarrassed to clean their fish in front of us. I asked why and she explained that they were down on their vacation from the Plano area and the day before they had cleaned a good mess of trout, redfish and flounder and some guys had looked down their noses at them and asked if they really needed all of those fillets. She went on to add that they got pretty nasty, harassing them for keeping fish.

When the morons asked what they caught them on and the answer was live shrimp, according to her, they acted like they had used dynamite. Her husband told me that he didn't want any trouble with anyone and that they just wanted to enjoy the few days they had left before returning home.

He didn't want any trouble? For keeping fish? He even told me that they never spoke about keeping fish around other fishermen because keeping them just isn't "PC" these days. Really? PC In fishing?

I love to fish with hardware. Fooling a fish, enticing a trout to hit topwater baits or soft plastics is what gets my blood pumping. I don't usually keep all the trout I catch on each trip but I will keep a limit of ten should I feel the need to. I don't think I'd want to hear someone tell me that keeping a mess of fish isn't PC. For one thing it wouldn't go over well with me and for another thing it's just plain rude and those who know me will tell you that I don't play well with rude people.

I've found that five trout do me just fine as a personal limit but the law doesn't say that I have to do that nor does it say you have to either. It's a personal preference and an idea that our esteemed editor turned me on to. I do that, but I won't look down on you or tell you that you're wrong for not doing it. Sometimes if we're going to have a fish fry for friends and family I won't stop boxing fish until I have my legal limit.

I know a lot of people, and I'm one of them, who can fish all morning and not catch a single fish and am still able to say that I had a great morning of fishing. But not everyone feels that way... Oh nay-nay!

Some people fish and keep what the law says they are allowed because that is their mindset. They believe, for whatever reason, that if they haven't filled a cooler they've not had a successful trip. Perhaps it's because they see the pictures of fish piled high on cleaning tables or on a boat deck, or those photographs of someone straining with a four man limit on a stringer over their shoulder, and believe that is what is expected of them. I don't know the reason why they feel that way and it's a shame that they do, but that's one of the reasons why TPWD sets size and bag limits.

But are we really to the point where we are going to start giving people a hard time and make them feel bad for catching their legal limits of fish or for using live bait?

There are few places in the world these days where political correctness hasn't reared its ugly head. It's prevalent in the hunting world where a deer hunter is made to feel bad if he shoots a buck that is too young.

Do we have to put up with it on the bays and at the cleaning tables now?

My first and only 30-inch trout to date was pretty near DOA when I landed her one hot June day and into the cooler she went, but my son's was alive and well when he landed his. He released her and he felt good watching her swim away, the accomplishment being enough for him without feeling the need to have the fish mounted. But I can tell you that he wouldn't have looked down on someone for not releasing theirs. He would have enjoyed the moment with them and now days it seems that a lot of people are not of that mindset.

I think a lot of the problem is that fishermen who look down upon or condemn those who use bait or keep their limit of fish have forgotten from whence they came.

I started my son fishing with live shrimp when he was really too young to even be out on the boat with me. He graduated to live croaker, learned to wade fish with them and caught his fair share of trout, as did I. On his thirteenth birthday he told me that he wanted to start fishing with lures; he'd seen one too many blow-ups on topwaters I was throwing and he wanted some. He's been fooling fish ever since.

If you don't like people fishing with live bait or keeping their limit of fish; that's your business and you are entitled to your opinions. But that doesn't give you the right to chastise, condemn or cause others to feel threatened for doing it their own way.