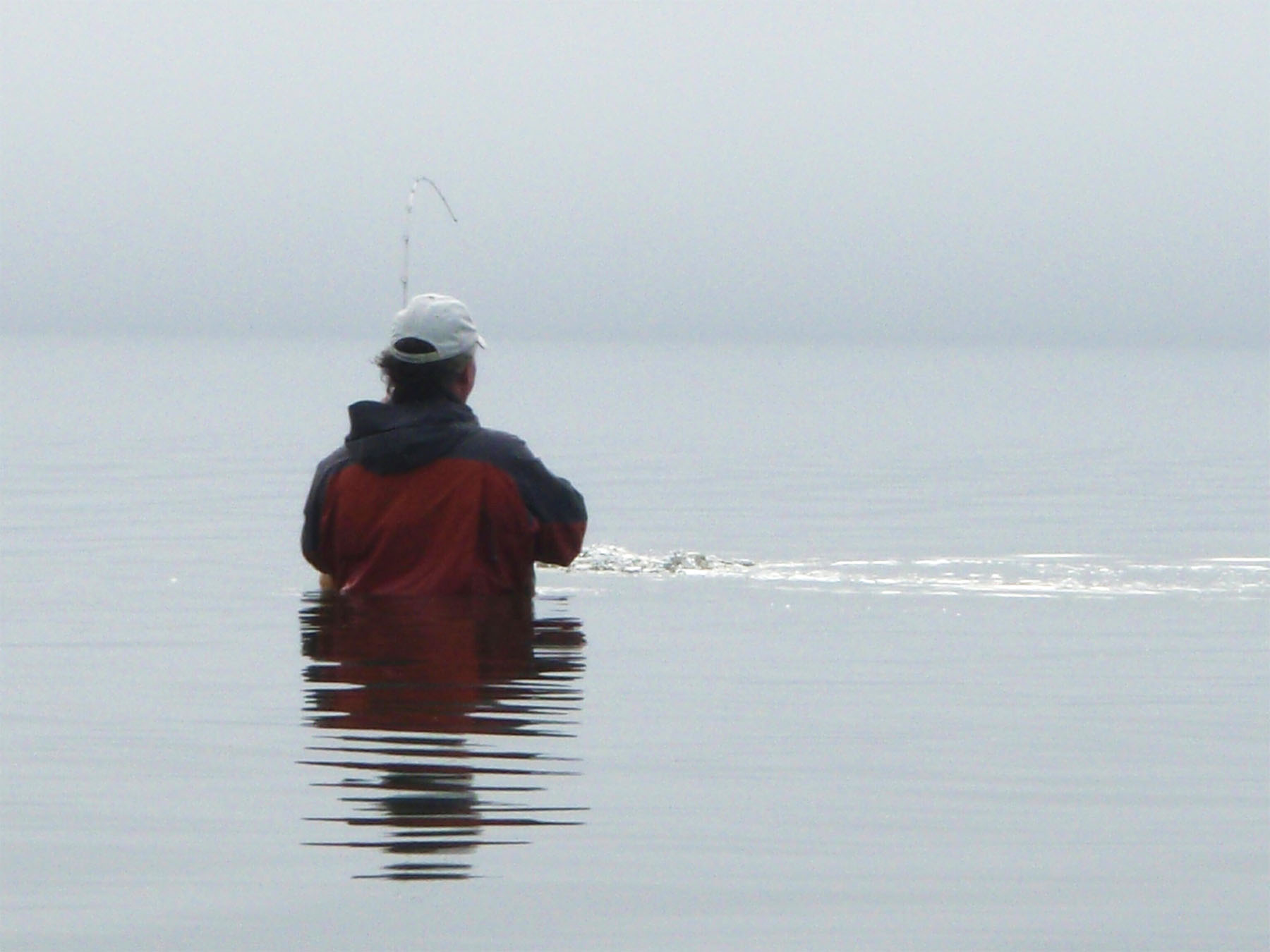 I was a tad apprehensive about my first wade fishing trip after knee surgery but I needn't have been. Everything worked as good as new and all apprehension vanished with the first cast of the morning's wade.

Oh how I had missed being in the water; moving, casting, hearing the sounds of baitfish being harassed by predators and seeing the bait mill nervously on the surface then scatter when something intent on making them breakfast got near. Reflections on the water and reflections in my mind opened a flood gate of pure happiness and those emotions stay with me still.

We take so many things for granted and it's not until you are unable to do what you truly love doing that you realize a huge part of your life is missing. As I watched the sun come up over the bay while fishing in the company of my son and friends made me realize that I'm not me if I can't be on or in the water pursuing speckled trout.

I've written about wading the lonely shorelines and how nice it is to not hear sounds that are not made by nature other than the sound of your reel and maybe the rattling of favorite topwater baits. But the camaraderie and conversations that exists among fishing companions who know each other so well can't be considered noise. Those special friends who know what to say and when, those who know what to do and when, those relationships are as special as the trip itself and they only complement each other.

Ten years ago my friend, fellow fisherman and writer, Mike McBride, told me that it isn't about the fish you catch; it's about the fishing and the happenings that go with it. That's absolutely true. As I fished that first trip since knee surgery his words came back to me over and over and I can only hope that everyone who makes a cast gets the meaning of those words one of these days.

And for those of you who aren't aware of it, Mike suffered a very bad stingray injury recently and is recovering from it. I know that he would appreciate some kind words and you sending some prayers up for him.

I've been hearing all sorts of stories from friends and acquaintances about the number of bull sharks in the bays lately. I've heard of stringers being taken away from fishermen, do-nets being ravaged and even one instance of being slapped in the face by the tail of one. We must all remember that when we venture out into the bays that we are in fact lowering ourselves in the food chain. I've had plenty of run-ins with sharks and (knock on wood) I've never been injured or harmed by one but I've lost a lot of fish, many stringers and once a fishing rod to them. Okay the shark didn't take the rod away from me, I slapped one that came too close to me with my rod and broke it. I still blame the shark.

In all seriousness sharks are always around, it just seems that lately there are more of them and you need to be alert and realize that you could have an encounter of the toothy kind.

In his book "Plugger", Rudy Grigar advised that you should never wade more than waist deep or deeper while wearing shorts and he advised to always wear long pants and long sleeved shirts. Rudy said that "a shark sometimes makes up his mind to run at something based on how it looks. Something that is white and meaty is inviting. So you want long sleeved shirts and long pants to make yourself look as much unlike dinner as you can." Rudy also advised "if a shark gets too close and you have a full stringer of fish, simply give it to him."

The simplest thing to do if a large shark approaches you is to get out of the water as fast as you can. Seriously, bull sharks are very aggressive and you just don't know what they'll do, so get out of the water. I've been run out of the water many times by large sharks that came too close to me and my definition of a large shark is one that is over six feet long. If you have a stringer with fish on it and that's what he's after, take Rudy's advice and let him have it. I've had them grab my stringers many times and I let them have the fish and the stringer. Later I've run the boat back to the area and picked my stinger up and found it still to be in good shape and in any case the float was still useable. Do not drape it over your shoulder to get it out of the water. There is nothing like some fish blood and scent dripping down your back and onto your legs to invite one of the toothy critters to take a bite out of you. You can slap the shark with your rod if one comes that close to you and that has worked many times for me. Be advised though that you can break a rod doing thatread above. Make some noisenot noise that a crippled fish makes like flaying the water; no, yell and stomp your feet on the bottom (sigh, watch where you stomp your feetstingrays, remember?)
So get out on the water; and into it too. Enjoy what some of us take for granted now and then. Remember to slide your feet even if you're wearing some of the bullet proof stingray boots and remember to watch your six for those toothy critters. The ones Rudy Grigar referred to as The Devils of the Sea.