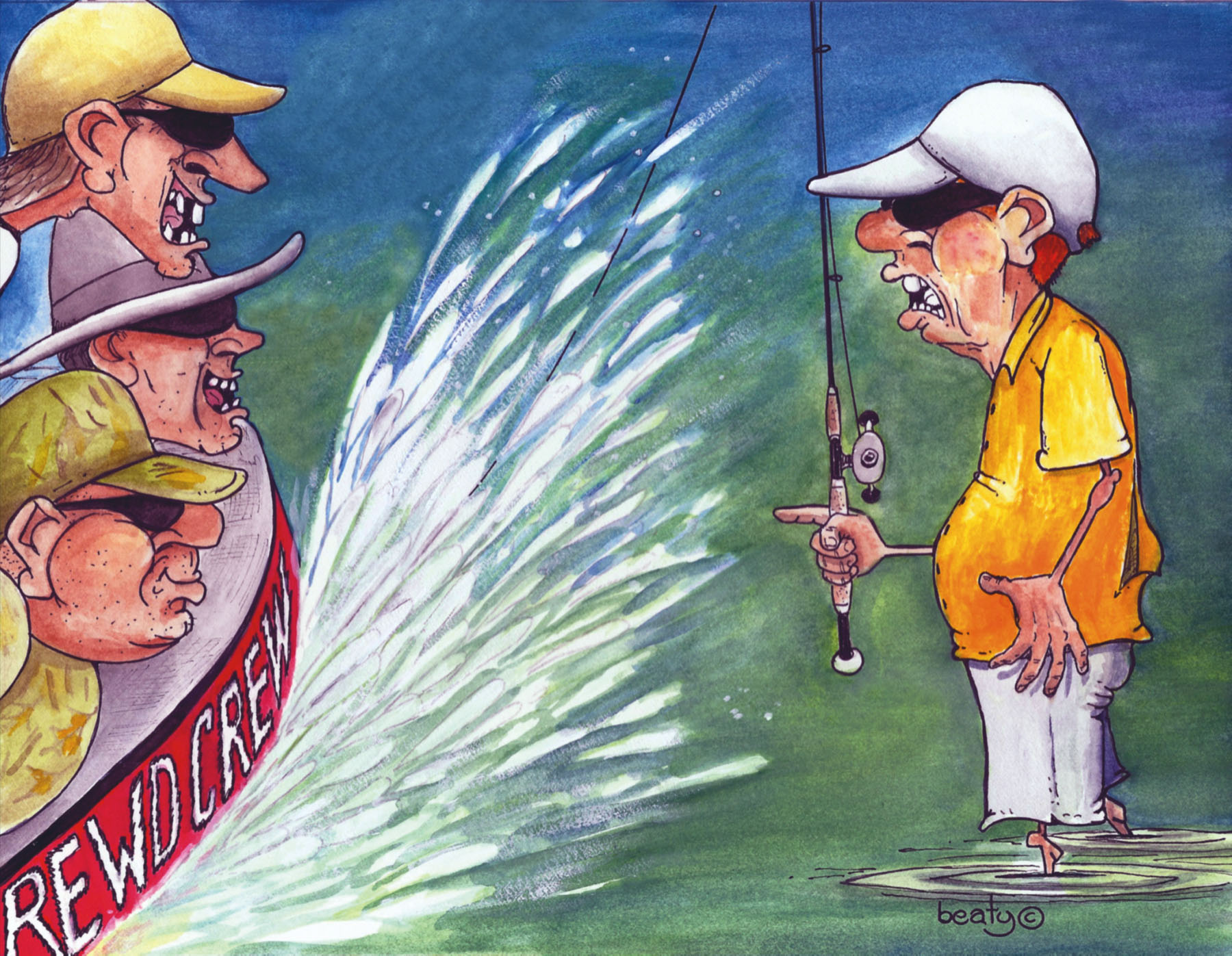 Bodie sat in his truck at the boat ramp, well out of the way of those using it, anxious for a particular boat to show up. Rumor had it that the previous day three yahoos in a red and white custom go-fast with "The Rewd Crew" stenciled on the side had caused a ruckus with some friends of his as well as with the bait camp owners. As the story was related, an elderly couple was having some problems getting their boat on the trailer in the crosswind and made the mistake of asking for some help from the trio. What they got instead was a dressing down from the group that covered everything from the man's ability to be out on the water to the ancestry of the family dog that was along for the ride. Bodie heard that one of them was snide enough to ask the old man who might be his wifethe dog or the old woman he had with him?

Bill Brewster, who would be turning eighty on his next birthday, had been fishing the area all his life and when he retired they bought a house and moved down here. He donated time and money to everything worthwhile and was a friend to all. For Bill and Helen to have to endure such nonsense went against everything Bodie stood for. He was itching to meet these toughs and maybe teach them the error of their ways.

A knock on the passenger window him and Tommy Meyers' face pressed against the glass made him gasp.
"Whatcha doing down here and whatcha doin' in the truck Bodie?" Tommy yelled. Bodie unlocked the door and Tommy slid into the truck.

"How'd you do at the bayou today, Tommy Boy?" Bodie asked.

"I didn't make it cause my outboard wouldn't start and I ran the battery down trying, so I went home, took a nap and decided to come down here and watch folks load their boats." Tommy replied.

"You mean those guys in the red and white boat with the stupid name? Heck Bodie, I just cruised by Toadie's ramp not ten minutes ago and they were loading as I drove by," Tommy said. "So is this official deputy stuff or just you wantin' to talk to those boys?"

Frowning, Bodie drawled back, "Nah, nothing official, maybe just me and those three for a little meeting of minds so to speak."

Bodie now had what his grandma use to call a genuine conundrum. He couldn't be at three boat ramps at the same time so he was going to have to have some help if he was to visit with these guys. "Tomorrow morning Tommy, I want you here at this ramp to keep watch for those three yahoos and if you see them drive up I want you to call me on my cell phone." Bodie ordered.

"Where are you going to be Bodie?" Tommy asked.

"I'll be up at Klerk's ramp and I'll get Monroe to watch Toadie's." Bodie assured him.

Eloisa slid three frosted mugs down Haddon's bar and the mugs seemed to magically separate and continue their slide toward three outstretched hands. "How does she do that Bodie, I mean that's just plain spooky the way she can slide mugs together and they part like that and go in the right direction. Just plain spooky I tell ya." Tommy said.

"Rumor has it she used to be a voodoo queen," Monroe offered with a grin and a wink toward Bodie. "If she gets mad at ya she'll make one of those voodoo dolls and stick pins in it just to torture you," he continued.

Tommy sprayed cold beer out both nostrils and started choking. And, just as always, Bodie was there to slap him on the back and get him breathing again.

"Voodoo is some bad stuff ya'll and I mean some real bad stuff." Tommy sputtered, wiping his nose on his sleeve and staring at Eloisa, "I know a guy who has a neighbor with a cousin from over in Louie-sanna and he said those voodoo queens are not to be trifled withwhere in Louie-sanna's she from anyway?" Tommy cried.

"El PasoI think," Bodie managed trying to hide his grin.
Tommy threw a glare towards Monroe who now had tears in his eyes while Bodie turned in his seat to regain his straight face and continue the ribbing. That's when Ol' Red walked in.

"Lord knows I need one; 'preciate it Bodie." Red grumbled.

"Sounds like you got a burr under your saddle tonight Red, problems at home?" Bodie asked.

"Naw, everything's good at home, but there's three old boys actin' up around here lately that I wish I could've met forty years ago. I would have taught 'em how to act right," Red growled.

"How's that?" Bodie asked, encouraging him to continue.
"I was just starting a wade across Harper's Flat when three idiots in a red and white boat came roarin' across, not a hundred yards in front of me. Then to make matters worse they circled back and ran so close I could have hit 'em with my lure. Really made my blood boil." Red said. "I'm telling you that was the sweetest spot, shrimp and mullet flippin' all around me. They knew exactly what they were doing and it made so mad all I could do was stand there and shake my head."

"How do you know they done that to you on purpose Red?" Tommy asked.

"Because, you ignorant freak of nature, they gave me the single finger salute as they passed by me the second time." Red snarled.

Bodie told Red about the incident with Mr. Brewster and his wife and during the conversation people close who overheard what was being said chimed in about their incidents with the trio.

Later at home Bodie called Stan Wigginton, the game warden, and told him what he knew about the Rewd Crew and about his plan to cover the three ramps the following morning. "Tell you what Bodie, keep your plan with Monroe and Tommy and lets you and me cover Klerk's ramp ourselves and you wear your badge too." the warden said.

"Stan, I hear what you're saying, but I was pretty set on teaching those boys a lesson the hard way," Bodie replied.

Be sure and join Bodie and friends again next month for the conclusion of this adventure.