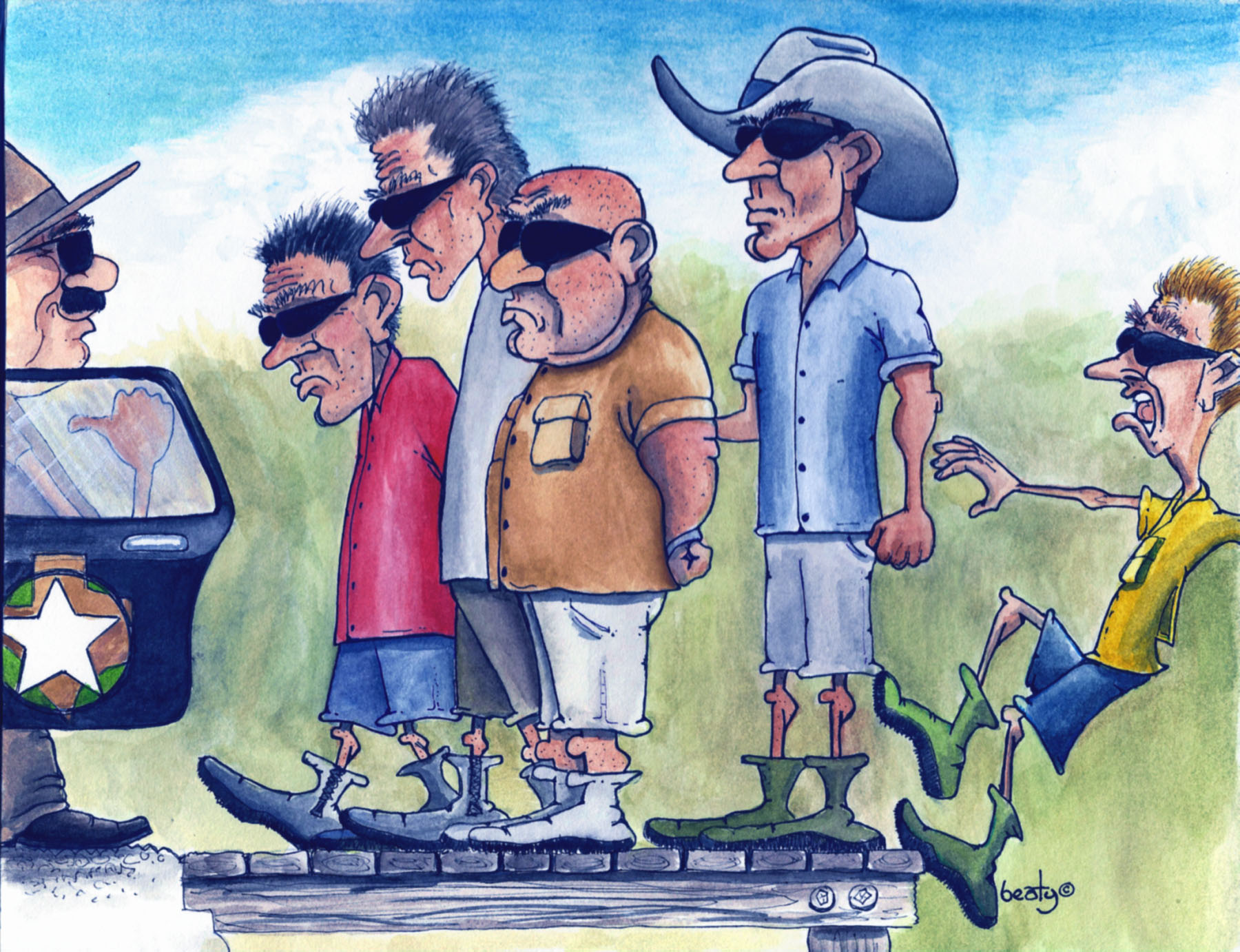 We left off last month with Bodie hoping to catch up with the Rewd Crew. Bodie is on the phone with Stan Wigginton, the local game warden…

I know what you’re saying Stan, you have my word. I’ll wear my deputy sheriff badge and we’ll do this strictly by the book. I must say though, these boys could sure use a lesson in old-school manners.”

“Tell you what Bodie,” Stan offered. “We’ll get these boys; we just have to be patient. The way they’ve been behaving we’ll get our chance soon enough.”

Bodie then said, “You know that boat they have is going to be a lot faster than the one you’re running.”

“Don’t worry; I’ve got a surprise for those boys Bodie. Meet me at Klerk’s dock at daylight,” Stan said in closing.
The next morning found Monroe at Toadie’s, Tommy at the state ramp and Bodie waiting at Klerk’s for Warden Wigginton. Bodie watched as Stan’s green pickup made the turn into the parking lot and gave an astonished whistle when he saw what he was towing. “What do you think of her?” the warden asked, stepping out of his truck.

Grinning in disbelief, Bodie called back to his friend, “I can’t believe the state would spring for a rig like this!”

“They didn’t,” Stan replied, loosened the tie-down straps, “She’s a confiscated dope runner. Federal boys apprehended the crew on their return to Mexico, chased them till they ran out of gas just off Port Mansfield. Heck of a rig, huh?”

Bodie ran his hand down all thirty-six feet of the sleek gunwale and paused to admire the three huge outboards. “How fast will this thing go?” he asked.

“Not sure. One of our guys says he got ‘er up to 70 knots real easy. Not that I want to take it that fast,” the warden replied.

They had just splashed the boat when Bodie’s cell phone rang. “They’re here Bodie, they’re unloading right now, and I mean they’re really here, so you want me to go harass them for a minute?” Tommy stammered.

“Just leave them be Tommy, Stan Wigginton and I will take it from here and do me a favor and call Monroe and let him know so he can go to work.” Bodie said.

Stan returned from parking his truck; “I’d have thought you’d be warming the engines Bodie.”

“To tell you the truth I’m afraid to touch anything. I never saw so many switches and buttons,” Bodie said shaking his head in wonder.

With onlookers gathering Warden Wigginton cranked the engines and began backing toward the ICW. A red and white blur shot up the canal letting them know the Rewd Crew was underway. Their wake left all the boats along the bulkhead rocking and slapping.

“That’s one!” said the warden as he nudged the throttles forward. Bodie felt himself being pushed deep into the wrap-around captain’s chair as the boat rose effortlessly with its nine hundred horsepower. Warden Wigginton flipped a switch and punched a button and a large screen lit in an eerie glow. “That’s our boys right there,” Stan said pointing to a blip on the screen.

For most of the morning Bodie and the warden kept their distance, watching and video-taping the Rewd Crew robbing crab traps and tossing a trail of empty beer cans.
“We’ve got enough already to cost them plenty,” Stan remarked, “But I want them for more than littering and rocking boats. If we give them another hour we might be able to make a BWI case. There’s a galley below and you’ll find lunch stuff in the fridge if you’re hungry. Make me one too, I’m starving.”

“This boat has a galley?” Bodie called over his shoulder as he stepped below.

Bodie returned shortly with a sandwich in each hand as Stan returned the video camera to its case. “They’re sure putting the beer away,” he said.

“We hardly need that radar Stan, we could just follow the cans,” Bodie smirked as he munched his sandwich.
The Rewd Crew pulled anchor and proceeded to buzz circles around the other boats at the cluster of wells, shooting the bird and catcalling as they tossed beer cans. “OK – I’ve seen enough Bodie, let’s get these guys off of the water,” Stan said.

Warden Wigginton fired the outboards and from amid the myriad buttons and switches he flipped one that turned on the flashing blue and red lights. The two lawmen caught up with the red and white blur faster than Bodie dreamed possible and Stan hit the siren in three short bursts. One of the passengers turned and saw the big boat approaching and leaned to notify the driver who simply shrugged and jammed the throttle forward. “They’re going to rabbit on us,” Stan called out to his companion. Bodie grinned as Warden Stan pressed the throttles forward another inch to overtake the Rewd Crew.
Three more sirens blasts gave the driver even more courage if not the realization that the lawmen meant business.  He gave his boat full throttle and headed closer to the shoreline. “They’re trying to get shallow where we can’t run,” Bodie warned.

“They can go as shallow as they like but they have to come back out sometime,” Stan chortled.

Sure enough, the Rewd Crew got up shallow like Bodie said and were flying along at about 50 knots. “Do you think they know about that reef ahead? I don’t think that boat will clear it on this tide and if they hit it at the speed their going the Rewd Crew is going to be the Wrecked Crew,” Bodie offered with concern in his voice.

Warden Wigginton hit his siren repeatedly but no one in the Rewd Crew looked their way. Hoping to show the driver of the Rewd Crew that he couldn’t outrun him, he sped ahead a hundred yards or so off their starboard. As they went by Bodie motioned for the operator to cut the throttle but this too was ignored. “I’m going to swing out around the reef then shut down and wait,” Stan advised.

“I don’t see the reef Stan, maybe there’s enough water for them to clear it, but if they don’t this could get ugly really fast,” Bodie shouted above the roar of the engines.

Settling off plane, both lawmen watched as the red and white boat bore down on the oyster reef. Just when it appeared they might get lucky and skip across, the Rewd Crew’s big outboard shot upward and pieces of the lower unit exploded across the water.

“This is as shallow as I can go Bodie, would you like to wade over and welcome our guests aboard?” Stan asked rather dryly.

Bodie grabbed his Stetson and slipped into the water, wading toward the hapless runaways. They couldn’t help but notice the shine of the badge at the edge of his life vest and the big silver revolver on his right hip. In drunken sheepishness they did exactly as the big man said. Bodie gave instructions to drop the Power Pole and set the anchor off the bow.

While Warden Wigginton watched from the helm of the state boat, Bodie marched the three back and one by one they were brought onboard, placed in handcuffs and read their rights. Hoisting himself aboard, Bodie helped Stan place PFDs on the men and took them below. With a cold stare and a hard voice Bodie told the men to sit down and to not even think about moving. Warden Wigginton was on the cell phone when Bodie rejoined him at the helm.
“There should be a unit waiting at the dock to take these guys to the county jail and the JP should be there as well,” Stan said.

There was quite a crowd when Warden Wigginton and Bodie arrived back at the dock and of course Tommy Meyers was running back and forth flapping his arms and yelling. Stan docked the boat and Bodie led the prisoners up from the salon. Everyone booed and called them names as Bodie and Stan helped them onto the dock and handed them off to some deputies and another game warden.

“Bodie…Hey Bodie,” Tommy yelled from the fuel dock. “Y'all got them boys. I knew you would and I told everyone…” Tommy didn’t get to finish. The excitement got the best of him and he flipped headfirst off the dock. Tommy splashed about in a crazy dog-paddle yelling for help which was generally ignored. Finally Bodie told him to settle down and swim around to the ramp and walk out.
Stan had plenty of help getting the big boat on the trailer while Bodie helped Tommy up the slippery ramp. “Figured on having a little swim to celebrate, did you Tommy Boy?” Bodie asked offering his hand.

“Someone pushed me and I think it was that guy over there with the floppy hat,” Tommy whined.

“That’s Mr. Brewster, Tommy. Do you think he pushed you in?” Bodie asked.

“Nah, must have been someone else, but I was definitely pushed.” Tommy said.

Stan arranged for a tow service to retrieve the Rewd Crew and impound it as he and Bodie went over the day’s events and filled out their incident reports.

Monroe showed up a few minutes after Stan had driven off and asked Bodie how everything went. But before Bodie could answer, Tommy chimed in. “Bodie and Warden Wigginton took them boys down Monroe, you should have seen it, they were like Texas Rangers or something!” he exclaimed.

“You were with them Tommy?” Monroe asked.

“Ah no, not exactly, but they told me what happened,” he squeaked.

Bodie whispered to Monroe, “Did you get it?”

“Oh yeah, I got it Bodie,” Monroe nodded in reply.

Later, when everyone was at Haddon’s Place, Tommy was telling everyone how that morning he had cut himself shaving, stubbed his big toe, dropped his cell phone and broke it when he called Bodie to let him know the “criminals” were unloading their boat and had been “pushed” off of the dock at Klerk’s. Someone remarked that Tommy sure had a bad luck day and Tommy agreed.

“Hey Bodie,” Monroe said. “Take a look at that doll by Eloisa’s cash register, now don’t that look a little like Tommy to you?”

“Well it sure does Monroe, and look there’s a pin in the right big toe too,” Bodie said with a snicker.

“What doll,” Tommy blurted, eyeing it instantly, and of course going into his usual choking. Bodie slapped him on the back a few times and when he caught his breath he squeaked more, “Bodie we’ve got to tip Eloisa real good tonight and, by the way, I need to borrow fifty bucks to pay my tab…please?”

“Sure Tommy, after all, we want to keep Eloisa happy don’t we?”

Tommy ducked his head as he reached for the proffered bill. “I didn’t know they had voodoo queens in El Paso, Bodie.” he stammered.