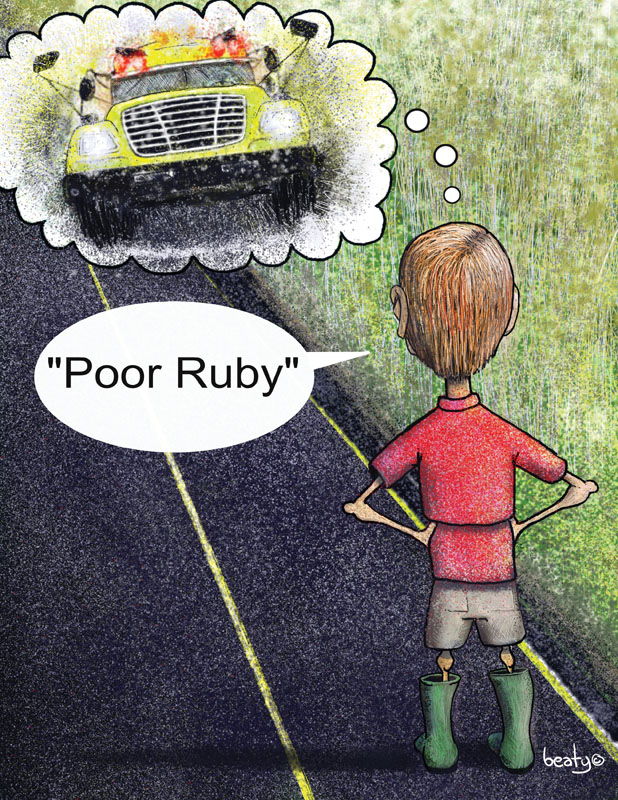 Bodie kept his eye on the jointed topwater as he worked it slowly across a gut near the shoreline. A few minutes earlier, a really big trout had swirled behind the bait but hadn't attacked it. Bodie thought that maybe he was working the bait too fast and on the next cast he slowed his retrieve, pausing more often. He figured the muddy bottom of the gut would be holding some fish but so far all he'd seen was that one big swirl and a wake as the fish took off down the gut.

Bodie was glad to be back on the water and despite the chill he was having a good time. He turned his head and looked over at his fishing partner and noticed right off that Red didn't have a stringer out. "Must be having the same lousy luck as me," he muttered.

When Bodie's attention lapsed was when the big trout decided to kill the noisy chartreuse and pearl floater.

Nothing subtle about it, only his reflexes kept his rod from being pulled from his cold left hand. He reared back instinctively with his rod high as the fish tore down the gut, ripping line at a rapid pace.

The big trout ran out onto the knee-deep sand bar along the outside of the gut and was heading toward the only area of oyster shell that lay along the island. "If she gets into that shell I'll lose her," he warned himself. Bodie tried to turn the fish, thumbing the spool. She found a clump of oysters and the line went limp.

Bodie's jaw was set and the muscles in his cheeks were quivering when a big smile slowly spread across his face. "Got me, didn't you?"

Disappointed but still pleased, he offered as if the fish could understand, "Well just come on back and get some more if you're of a mind. I'm still here."

Bodie knew that Red was coming up behind him. He couldn't hear him but he sensed his presence.

"The object of this sport, Bodie, is to catch the fish and THEN release it," Red taunted. "You'll save a fortune on lures that way."

Bodie turned around grinning and suggested maybe they should move to a different spot.

"I was hoping you were going to suggest that, Bodie. This place is as dead as Rudy Poindexter."

"Who, pray tell, is or was Rudy Poindexter?" Bodie inquired.

"Guy I went to school with when we were kids."

"What happened to him?"

"No, no," Red said with a straight face. "He was out in the street scratching fleas and a school bus ran over him."

Before Bodie could say anything Red was moving for the boat as fast as he could wade.

"Oh, that's gonna cost you, just so you know, that one's going to cost you," Bodie chortled.

The two fishermen hit three more places but found nothing that wanted what they were offering. The decision to head in and grab some lunch at Haddon's was easy.

"I ran out of coffee two hours ago," Bodie announced.

"Yeah, I know," Red replied sheepishly. "I forgot my thermos and I've been helping you drink it."

Bodie shot him a dagger and said, "You keep this stuff up and I'm going to start calling you Tommy Jr."

"Oh, please no, Bodie, anything but that," Red blurted, grabbing the console railing as the big Tran SVT jumped on plane and headed north.

Washing the boat and their gear, Red said that he would meet Bodie at Haddon's and sped away in his golf cart. Bodie put his rods into his truck and followed.

Bodie called Monroe at the ranch to check on things. He had spent the better part of a week working on various projects out there after returning from South Texas where Mr. Connor had leased some prime brush country for winter pasture. He'd done some hunting but didn't see any buck bigger than the one he'd shot the previous season and settled for a couple doe for the freezer.

Satisfied that Monroe was on top of the projects he'd lined out with him, Bodie shut the truck off and walked into Haddon's.

Tommy and Red were at a table and Bodie noticed an extra cup of coffee. "Thanks for ordering me a cup, Red. I sure can use it."

"Y'all didn't do much good today?" Tommy asked.

"Had one really good trout find some oyster and cut me off, Tommy. The only bite I had all morning. Red never had a bite."

"Well some days are like that, the water is just dead," Tommy agreed.

"A friend of Red's, died a long time ago," Bodie offered between sips.

Eloisa came to the table and took their orders. Bodie and Red opted for chicken-fried steak and Tommy a double meat, double cheese, chili burger.

"That's about a pound of beef smothered in chili," Red cried.

"I know, but I missed breakfast," Tommy answered. "And I'm sorry about your friend Ruby Pointer."

Red looked at Bodie who was trying not to laugh when Red sternly replied, "RUDY POINDEXTER, not Ruby Pointer!"

"Well excuse me," Tommy shot back. "I only heard the name once and it's a weird name anyway."

"Now, now, Tommy Boy. It's not good to speak ill of the dead." Bodie chided.

Tommy went to sulking and was quiet as Bodie and Red discussed politics.

"I wasn't speaking ill of the dead," he finally squeaked apologetically.

Bodie was peering at Tommy and was about to ask what he really meant to say about Red's friend, when Red chimed in.

"Well what happened to him?" Tommy asked meekly.

Red pretended to get all emotional and went back through the whole fictitious tale.

"That's terrible," Tommy said sadly, nearly in tears himself. "I mean are you sure it was the dog food that made him get out into the street?"

Red looked at Bodie but the big man just held up his hands to signal that Red was on his own.

"No, Tommy, it was the dog food, he ate it all the time. To make it worse, Old Rudy's family was so poor they couldn't afford a coffin. They just wrapped him in his favorite blanket and we put him in a hole," Red replied. "I was a pallbearer and I put his ball glove in the blanket with him."

By this time Red had real tears trying not to laugh.

Tommy just shook his head. Red said he needed to pick up his wife for some shopping in Victoria. Bodie took the bill to the cash register saying he needed to go by the ranch.

They were all walking out the door when Tommy asked, "Red, do you remember what brand of dog food Ruby was eating?"

"Do you remember the brand of the dog food that killed your friend?" Tommy asked again.

"He was killed by a school bus, Tommy." And with that he floored the golf cart.

Tommy told Bodie that it was a terribly sad story and that someone needed do something. Rather than explain it to Tommy, Bodie agreed that perhaps something should be done. Completely flabbergasted that Tommy could be so gullible.

"Wish I could hang around, Tommy Boy, but I need to go," Bodie announced.

Well, if they won't do anything for that poor Ruby guy, I'll just have to do it myself, Tommy thought to himself.