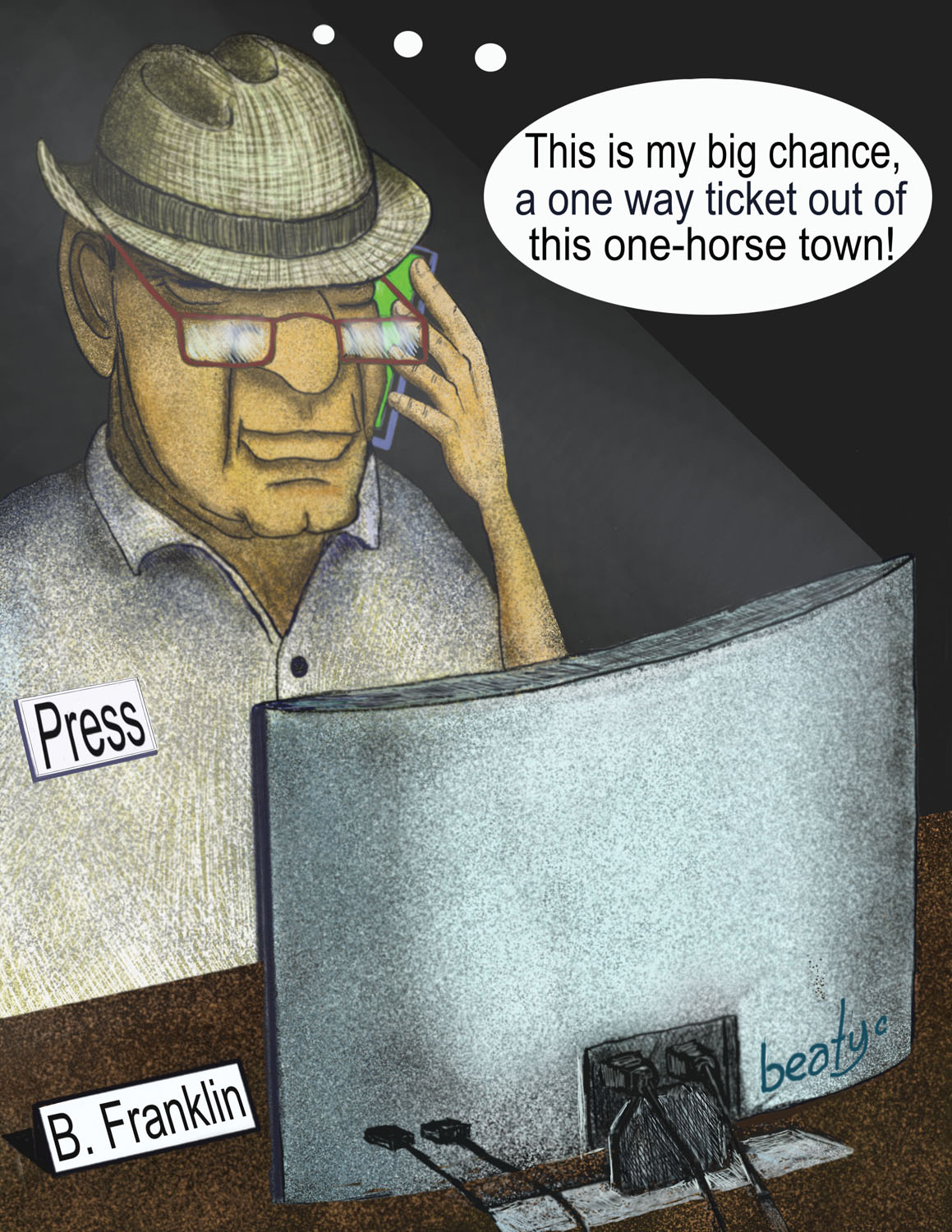 Tommy mulled the story of Rudy Poindexter all afternoon and then called a friend at the local weekly paper. Tommy knew it was a long shot but asked if he could check news archives for the story of a kid named Ruby, killed by a school bus in Houston in the 1950s.

The reporter asked what it was all about and Tommy told him of the dog food and fleas, and how he came to be run over. He told of the boy being wrapped in a blanket and buried with his ball glove in a backyard grave. The newsman was aghast and promised to check with a reporter friend in Houston who had special archive privileges.

“It’s been so long ago, Tommy, I can’t promise anything but we’ll try to get to the bottom of it,” he promised.

Wheels were turning in the reporter’s head. Cracking a case like this and exposing the maker of the dog food might be my ticket out of this one-horse town…

Billy “Scoop” Franklin, Tommy’s local reporter friend, found nothing in the archives of the little rag where he worked, and as promised, placed a call to an acquaintance at the big Houston daily. Learning that the guy was out for a two-week vacation, he turned to the internet. Lo and behold, he discovered a young Rudy Poindexter killed in an auto pedestrian mishap in 1957. Ecstatic, he phoned Tommy.

“Tommy, are you sure the boy killed by the bus after eating dog food was named Ruby Poindexter. Or was it Rudy?”

“Well, maybe. I might have misunderstood Red, the story was so awful and all I might have got it twisted up,” Tommy admitted.

Scoop ran with it and dug deeper into the death of one Rudy Poindexter.

The obituary was vague, stating only Rudy’s name, date of birth, date of death, and parent’s names. It also named surviving siblings. Brother James and sister Rose. The lack of funeral and interment details struck him as very odd.

Scoop worked late into the night searching genealogy websites and was sure he’d found Rudy’s brother, James, and his sister Rose. Becoming a member of the site for a modest credit card fee, he obtained what he hoped would be current addresses and phone numbers.

Too late to call tonight but I’ll try first thing in the morning, he thought.

Bright and early, Scoop placed a call to one James Poindexter in Lookout Mountain, Georgia.

“Ah, Hello,” Scoop stammered, “May I speak with James Poindexter?”

“Mr. Poindexter, my name is Billy Franklin, a reporter with Espiritu Santo Bay Fisherman down here in Texas. I was wondering if you could answer a few questions for me?”

“Umm, I’m, I’m working on a story. Did you by chance have a brother named Rudy, killed in an auto pedestrian accident in 1957?”

“Why yes, Rudy was my younger brother. But, say there, Mr. Franklin; that was almost sixty years ago, what’s this about?”

“Mr. Poindexter, I’ve a friend that learned of your brother’s death from a fishing buddy.

Just tragic. Is it true he was runover by a school bus?”

“Yes, it was very sad and I don’t believe my folks ever got over it.”

“Can you tell me what caused the accident, Mr. Poindexter?”

“Well, I wasn’t home when it happened but we were told Rudy was playing in the street and the bus driver was blinded by the glare of afternoon sun and did not see him.”

“Was Rudy ever bothered by fleas?”

“Mr. Poindexter, did Rudy have a dog?” Scoop asked.

“We had a family dog named Lonesome. Followed Rudy everywhere.”

“Do you perhaps remember what brand of dog food you fed to Lonesome?”

“We always fed Alpo. Dad always said it was the best money could buy.”

Beginning to feel uncomfortable, Poindexter interjected; “Mr. Franklin, I do not understand something here. My brother was killed in 1957, for Heaven’s sake. Why the sudden interest in his death?”

“As I said, sir, a friend of mine was told the story of Rudy’s death and it upset him. He asked me to do some checking to see what really happened.”

“Well, sir, it’s very upsetting to me, too. It took years and I finally put those memories behind me, until now.”

“I’m very sorry to have upset you, Mr. Poindexter. I’m just trying to get to the bottom of it to give my friend some closure.”

“Closure?”, Poindexter blurted, irritated. “Why would he need closure? He didn’t even know Rudy!”

After a long pause, Poindexter came back in a more controlled voice.

“For the record, Mr. Franklin, my mother and father settled with those responsible for Rudy’s death and we moved on. My sister married and moved to Montana and bought a ranch. I went to college at Tulane, met my wife there and we eventually moved to Georgia. It was hard for all of us but we finally got over losing little Rudy.

“What kind of work were you in, Mr. Poindexter?”

“I was president of a bank in Chattanooga.”

Scoops mind was racing. – His sister bought a ranch in Montana and he went to Tulane. Where’d a poor family get that kind of money? Must’ve been a huge settlement from Alpo!

“Mr. Poindexter, I do appreciate you taking time to speak with me and I do apologize for rekindling such unpleasant memories.”

“You’re welcome, Mr. Franklin, and I do hope your friend finds closure, as you put it.”

“Oh, Mr. Poindexter, just one more thing if you will, where in Houston is Rudy buried?”

There was a long pause and Scoop was practically salivating for the reply.

“Rudy was, ah, Rudy was laid to rest in a family plot on private property,” Poindexter replied, ending the call.

Scoop was beside himself. “This is 100 percent headline news, right here,” he screamed aloud. “Big enough to get me out of here and into a real paper. Austin, San Antonio, maybe even Houston!

Scoop didn’t know what to do next. He tried getting in touch with Alpo but ownership of the brand had changed many times over the years. Even if he tried to learn of a settlement in the death of eleven-year-old Rudy Poindexter, nobody would likely divulge any details.

“Yes, may I speak with Mrs. Rose Endres please? This is Billy Franklin calling, a newspaper reporter from Texas.”

“I’m sorry, Mr. Franklin. Mrs. Endres and her husband are both deceased.”

“Oh, I’m terribly sorry, sir. It didn’t have anything to do with dog food did it”? Scoop’s imagination was getting the better of him.

“I beg your pardon,” the voice replied.

“Oh, never mind. Sorry for the intrusion,” Scoop said and hung up.

Maybe I could dig into legal notices for evidence of a lawsuit that settled the matter between Alpo and the Poindexter family, Scoop wondered. Or maybe I could find the address where they lived and get the authorities interested in the unlawful interment of a young boy on the property.

Scoop phoned a school chum who worked in homicide at HPD and spilled the story.

“Billy, so you’re telling me the family just dug a hole in the backyard and dumped this kid into it?” Bob Talbot asked.

“Yeah, that’s what I’ve been told. Wrapped him in a blanket and buried him with his ball glove,” Scoop assured the detective.

“So, it happened in 1957, what do you want me to do about it? The only crime would have been burial without a permit or something like that, and the people that did it are dead.

“Look, Bob, I dug around and found this address. Maybe you just swing by and see if an old frame house still stands there, OK? Maybe you could find a reason to check out the backyard with a cadaver dog. This story is very important to me,” Scoop pleaded.

“Whoa buddy, you’re really reaching here,” Talbot replied. “It takes a warrant for that kind of stuff and I’m not EVEN going to take something this sketchy to the DA. Got it?”

“OK. But can you at least drive by the place and tell me what you see. Please?”

“Well, I’ll be in that area tomorrow and I’ll drive by and have a look,” Talbot said, giving in to his old friend.

Scoop phoned Tommy as soon as he ended the call with the detective. “Tommy, you ain’t going to believe it. You were right…