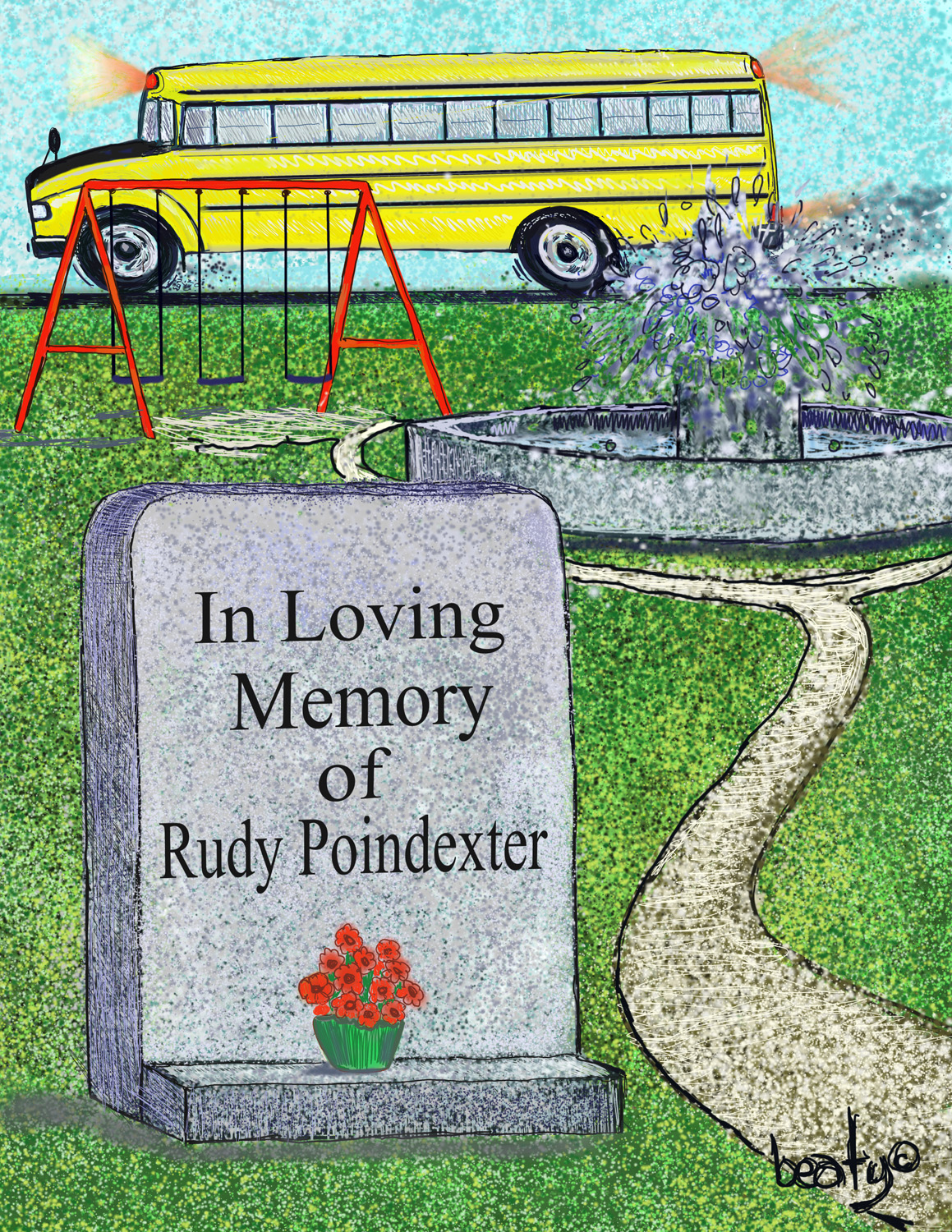 Scoop had a hard time sleeping and the morning dragged as he waited on a call from Bob Talbot to tell him what the cadaver dog had found at the old Poindexter place.

“Well, they can call you on your cell phone because I’m about to turn off the A/C and lights,” the boss replied in no uncertain terms.

Scoop stopped at a local café for dinner and tried calling Detective Talbot, but it went straight to voicemail the same as it had done all day.

Tommy, Bodie and Red were cleaning fish at Bodie’s dock from an afternoon wade trip.

“Well Red, that’s a lot better than the last time,” Bodie announced with a smile.

“Sure is,” Red agreed. “Nonstop action from the time we got out of the boat.”

“Nowhere near dead as Rudy Poindexter,” Bodie added with a chuckle.

Tommy ignored the two laughing and joking about that poor Ruby fellow. He thought it was just horrible, the two of them should be ashamed, talking like that about a dead boy.

“Aren’t you coming to Haddon’s for fried fish?” Bodie asked.

“No, I don’t want to go to Haddon’s tonight,” Tommy answered, and left with his bag of fillets.

“Shoot. With him, who knows? Could be jock itch or his pondering why he even exists!” Red growled.

“Aw, take it easy on him Red, he’s your friend and you give him way too much grief,” Bodie chided.

“I know. But if I start being nice to him it would be hard on my heart. And besides, he wouldn’t know what to do,” Red replied.

Red got a call just then from his wife and had to skip dinner at Haddon’s. Bodie locked up and went on by himself. “Cold beer, iced tea and fry these up nice and crispy,” Bodie said to Eloisa, handing her a bag of fillets.

“Tommy had to go home and Ol’ Red’s wife wanted him at the house, if you can believe that,” Bodie laughed.

Eloisa laughed and turned in Bodie’s order, then drew a beer and placed it in front of him. “Do you want that iced tea now or with your fish?”

“It can wait,” Bodie replied. “I want to enjoy this cold beer first.”

Eloisa brought Bodie his food and asked if he had heard anything about a newspaper in a nearby town investigating the death of a boy years ago, in Houston.

“No, I haven’t heard anything. Why is that little once-a-week paper investigating anything that happened in Houston anyway?” Bodie asked.

“All I know is that it happened a long time ago. Supposedly the kid was buried in the family’s back yard and he’d been eating Alpo,” Eloisa remarked offhandedly.

“Are you OK Bodie? You look like your food went down the wrong pipe or something,” Eloisa asked with concern.

“Eloisa, did you happen to hear the name of the kid?” Bodie quizzed her.

“Sure did – Poindexter – like the cartoon!” Eloisa giggled, returning to the kitchen.

Bodie got up and went outside to call Red. “Eloisa just told me that she heard the Ocean View paper was investigating the death of a boy years ago, buried in his family’s backyard, name of Poindexter.”

“What the world is that all about?” Red exclaimed.

“I’m not sure, Red. But I have a feeling Tommy may have taken things into his own hands and is the driving force behind it,” Bodie sighed.

“You really have to let me kill him this time Bodie,” Red wheezed. “He’s a nutcase.”

Bob Talbot called Scoop and told him they’d found three graves in the backyard of the old Poindexter home.

“Three graves?” Scoop asked incredulously. “I’m going to be famous. I might even land a network job!”

“Yup, three graves, of what would appear to be a goat and two dogs,” Talbot droned.

“But what about poor little Rudy Poindexter, you didn’t find his grave?” Scoop pleaded.

“I would imagine he’s buried with his folks somewhere, Scoop. And the only reason I’m not going to beat you within an inch of your life is because we got some praise for the dog and his handler from up the ladder.” Talbot blurted, and hung up.

“Oh man, Oh man. What am I going to tell the boss?” Scoop cried pitifully.

Bodie pulled up to Tommy’s house and was glad he was still up. Tommy answered the knock and invited Bodie inside. “Whatcha doing out here this time o’ night, Bodie?”

“Tommy, have you any idea why a news reporter would be asking questions about Rudy Poindexter, that boy that Red and I were talking about the other day?”

“Bodie, I felt so sorry for that boy, what with me almost dying and stuff not long ago, I just felt horrible that a friend of Red’s from when they was kids might be lying in an unmarked grave with no family to mourn him and, well, I just had to do something!”

“Tommy, Red never had a friend named Rudy Poindexter. It was a joke he made up, just a name he pulled out of his hat. Whatever your reporter is digging up has nothing to do with us. Red didn’t know him, it was just a joke.”

“Well, I feel pretty stupid Bodie, but the way Red told that story, well, it just tugged at my heart and I just had to try to help!” Tommy whined.

“It’s a good thing, what you tried to do, Tommy. But nothing of the sort ever happened.”

Scoop called Tommy the next day and told him no human remains were discovered on the Poindexter property. Tommy in turn told Scoop the truth from Bodie, that it’d all been a joke.

“Do you mean I went off on a wild goose chase and none of this is true?” Snoop railed.

“Well no, not exactly. You said you spoke with Rudy Poindexter’s brother and that he was hit by a school bus and he wouldn’t tell you where he was buried. So, part of it’s true. Except maybe Rudy having to eat dogfood, I think Red made that up. But a boy was killed by a school bus and you confirmed it,” Tommy replied beggingly.

“Were you able to find out where the parents are buried?” Tommy asked.

“I did not and I don’t care. I’m done with this and I’m quitting my job before I’m fired. I’m going to work for my brother-in-law in Terlingua who owns a rattlesnake farm, RV park and taco stand down there,” Scoop exclaimed and slammed the phone down.

Tommy was still upset, even though Red’s story was only a joke. He called a private investigator in San Antonio and gave him what information he had and asked that he spare no expense in getting the answers he wanted. With basically a blank check to work with, Todd Skelton – Private Investigator, wasted no time. Three days later he presented his findings to Tommy.

“What I discovered was that a Rudy Poindexter, age eleven, was run over by a school bus in 1957 and his body was cremated. His mother and father were killed in an automobile accident in 1965 and they too were cremated,” Skelton told Tommy.

“Do you know what happened to the ashes?” Tommy asked.

“I located a nephew of Mr. & Mrs. Poindexter and he told me that the ashes of all three were combined and scattered in the backyard of their family home.”

Tommy’s next call was to Houston attorney Fenton H. Croix. He laid out a plan for a project and asked if the attorney would take it. If so, how much might it cost him?

Tommy tried to avoid Red and Bodie for almost two weeks and was successful, having told Bodie that he had to go to Houston on personal business. Upon returning, Tommy called Bodie and Red and asked them to meet him at Haddon’s for lunch.

“We missed you, Tommy Boy,” Bodie greeted him.

“Speak for yourself, Bodie,” Red grumbled.

“Sorry that I was gone longer than I thought I would be, but I think you will both like what I have here,” Tommy beamed.

Tommy opened a big manila envelope and pulled out some artist renditions of a children’s playground. It was beautiful with all sorts of play equipment and multiple fountains. In the center stood a tall granite monument inscribed; In Loving Memory of Rudy Poindexter.

“It cost me a little money. I had to buy the lot from some folks planning to build a big house, and a bunch of permits and stuff like that from the city, but I got it all done,” Tommy said proudly.

Bodie was speechless. Red grumbled that Tommy had lost his mind.

“I mean really guys, what do you think,” Tommy asked excitedly. “And you may be right, Red, but it’s only money. And now the kids in Rudy’s old neighborhood have a safe place to play and nobody will get run over by a school bus.”

“But Rudy Poindexter never existed, Tommy I made it up, it’s just a joke,” Red practically screamed.

“No! He was a real kid, Red. And because of you, he and his parents are no longer in unmarked graves. They have an entire park in their name as a memorial and, really, you’re the one responsible for all of this getting done,” Tommy gushed triumphantly.

Red turned to Bodie with a pleading look in his eyes but all Bodie could say was; “Eloisa, bring us a pitcher and three cold mugs please.”