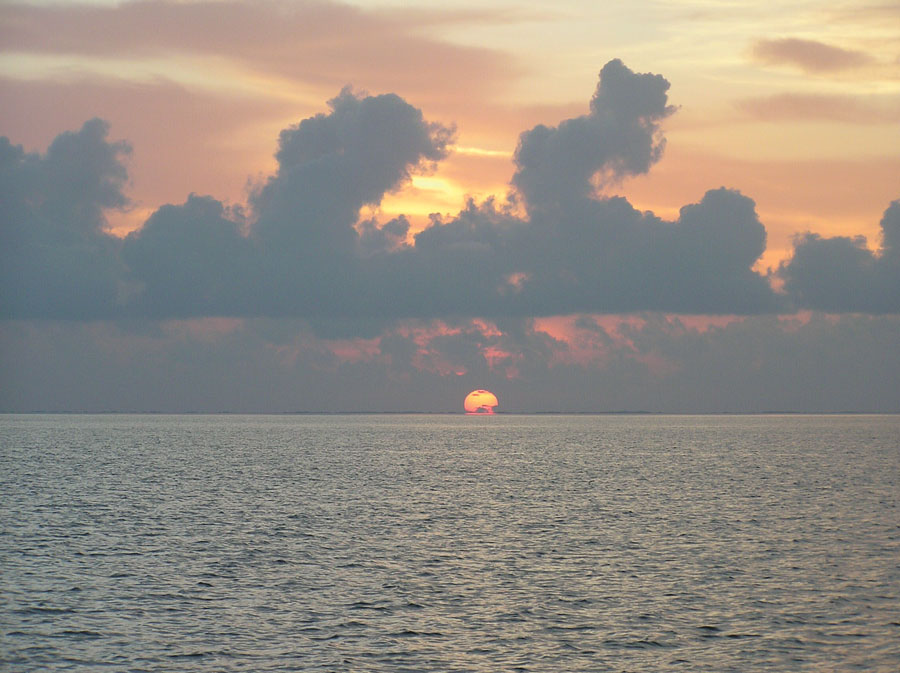 Sunrise on Matagorda Bay. I had to see this over a hundred times, following my dad as a small boy and then fishing with him as a young man. Seen it at least a hundred more with my own son trailing behind me, now a grown man himself. I truly regret that we rarely made photos back in the day – but the images in my memory as still sharp as a tack.

I was five years old and with my Dad down at Oyster Lake, sitting on the sand wearing a little inflatable life ring that had fish figures on it. My Dad was casting his red Ambassadeur 5000 out into the current of the outgoing tide that was rushing under the old wooden bridge and into West Matagorda Bay. The old man who had a bait camp there was talking to my Dad and his pet crow was flying around.

That old crow would steal anything shiny that you happened to set down. If you took a ring off or your watch or just laid your pocket knife down he would swoop down, snatch it and fly off. Then he would circle around and fly into the back window of the old mans trailer.

Now for those who knew about the crow, they would simply walk up to the old mans trailer and tell them that his blankety-blank crow had stolen this or that and the man would produce a box of purloined items and say, Whats yours?

I always wondered about those who didnt know the crow was his pet. I guess thats how the old man survived down there in that desolate place.

I was watching that crow because my Dad had told me that he would fly down and peck little boys on their heads. I didnt know if that was true but I had me a pretty good size oyster shell in my hand and if that crow tried it, he was going to get it.

I watched him leave the old mans shoulder and fly up and around the bridge and right into someones station wagon. In a few minutes he flew out the opposite window and made a big circle and disappeared behind the trailer. I dont know what he had pilfered from the station wagon but he had something dangling from his beak.

I got up and walked to my Dads black and red pickup and got a Dr Pepper from the metal Coleman ice chest sitting in the shade and sat back down in the sand under the tailgate.

My Dad looked back and I wasnt where he had told me to sit, so when he called my name I walked back down closer to him. He told me to stay away from the water with the tide moving like it was and there was no need to remind me. He had already told me more than once and made sure to tell me that grown men had fallen in and drowned when the tide was moving like that. Well that just made me scared for him because I sure wasnt going near the water.

I watched my Dad work what was either a Hump or Bingo lure suspended underneath the clear plastic popping cork. There was a rhythm to the way he worked it and a certain amount of time that he would wait before he would pop the cork again and I would make a game out of watching it. I was easily entertained.

I cant remember now but it sure seemed like he brought a trout in on almost every cast and he called me over and let me reel in a few. My own rod and reel was still in the garage back home where I had left it. One of those I thought I put it in the truck deals.

After a while he let me fish. Hed cast out for me and let me reel in but I could never master the rhythm in popping the cork. But I did catch a trout and, after he unhooked it for me, he let me hold it and put it in the fish box that he also used for a stool. That was the first speckled trout I had ever caught and buddy, you can bet that everyone in kindergarten heard about it come September.

At that time my Dad was running a 16 Yellow Jacket boat and even though he had a boat he still liked to fish from the bank on occasion. Oyster Lake was one of his favorite walkup spots as was Cashs creek, the hog pens on the Tres Palacios River, and the surf in Matagorda when the wind was right. I dont remember but it could be that he fished from the bank when the wind was blowing too hard to use the boat. All I know is that I enjoyed doing both and I loved being with my Dad. What I didnt know at the time was that he was instilling in me a love for fishing and for the outdoors.

In the winter months when we werent in a boat on the rivers wed set up lights down at Oyster Lake. I was a bit young to stay up real late and would wind up asleep in the truck, but I can remember the water alive with fish and my Dad and friends catching them two at a time on tandem jigs.

There would be a fire made of driftwood and an old-fashioned coffee pot like I had seen on western movies. I learned that if you didnt use a towel or hot pad to grab the handle you would wind up crying and someone would be rubbing bacon fat on the blisters.

The men would fish until the tide slacked and then take naps. If the tide was going to move again they would fish it and when it did otherwise they would sleep until daylight, put on their waders and do some wade fishing. While this was going on I would be casting from the bank with what I believe was a Johnson closed-face spinning reel. I caught a lot of magnum oyster shells in the clear cold water.

This is how I grew up. Fishing or hunting with my Dad and learning from him all those things that help me to this day. To me it can seem like yesterday and sometimes when I am out on the water or even down at Oyster Lake I can close my eyes and be right back there when I was five years old. I can smell the smoke from the fire, I can hear that stupid crow and I can see my Dad casting and working his lure.

Its hard to believe that those memories are 50 years old, that my Dad has been gone for 5 years, and that I have turned 55. Hurricane Carla got the bait camp and the trailer; old age got the old man. I dont know how old that thieving crow was back in 1962 but some Native American legends say that a crow can live to be 70 years old.

If you happen to be headed down to Oyster Lake on West Matagorda Bay, my advice would be to play it safe and keep your windows rolled up, your watch on your wrist, and your rings on your fingers.

Turning fifty-five, the Double Nickelwhod have ever thought it.