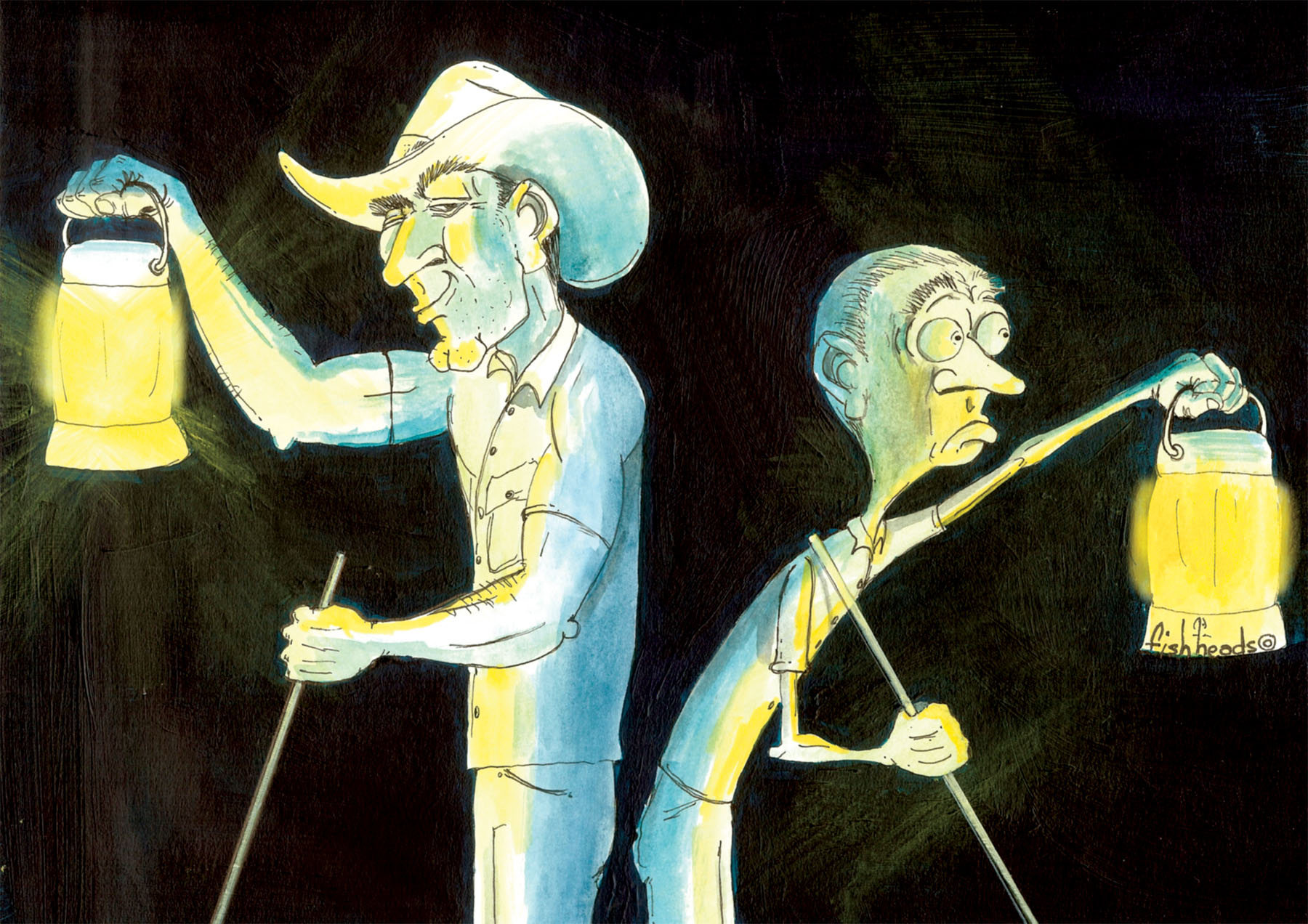 Bodie and his friend Tommy Meyers stood belly deep in the second gut off Green’s Bayou on the south shoreline of West Matagorda Bay. Rafts of mullet milled about and would suddenly burst out of the water to avoid the sharp teeth of the trout Bodie and Tommy were catching.

Retying his leader to a 1/8-ounce leadhead Bodie looked over at his friend and nodded in appreciation of the fat speck Tommy was stringing.

“You did just that Tommy Boy and these are sure enough some of the fattest trout I’ve caught in quite a spell,” Bodie said with a grin as he cast to a large swirl about 20 yards in front of him. Bodie felt the tap as the fish took the soft plastic bait and paused a second before setting the hook. The hookset felt like it was against a stout oak tree and immediately the fish pulled drag as it ran parallel to the gut Bodie had cast into.

As Bodie guided the fish to his left hand he saw Tommy wading back to the shoreline. Bodie watched as Tommy bent over and moved something back and forth in the clear water. “What are you doing Tommy… trying to revive a trout?”

“Found me one of those big 40mm shells Bodie!” Tommy yelled. “I haven’t seen one much less found one since I was a boy Bodie.”

Bodie had enough trout to last him and headed up to see what Tommy had found. Sure enough it was an empty 40mm anti-aircraft shell and it was in pretty good shape seeing as how the thing had been lying on the bay floor since the 1940s.

“Did I ever tell you about the bad accident they had over here during the war?” Bodie asked.

“What accident?… Look at this shell Bodie, it’s going to look good up above the bar at Haddon’s Place next to the Haddon’s Cup I won,” Tommy said.

“Some soldiers were killed over here Tommy, you should have a little respect for that.” Bodie said as he took the shell casing from Tommy. “Four soldiers from Camp Hulen had an ambulance over here doing a drill and they got killed.”

Bodie thought for a minute and said, “They were just on maneuvers Tommy and somehow one of the soldiers got hold of one of those 40mm anti-aircraft shells that had its timer intact and it went off inside of the ambulance and killed the whole crew,” Bodie said with a grim look. “Heck, it could have even been that very shell you’re holding that did the deed,” Bodie added as he tried to keep from laughing.

Tommy didn’t say much for a few minutes as he kept looking at the big shell. “But Bodie, if the shell went off, wouldn’t it have blown up the casing that I’ve got here?” Tommy asked.

“Well, you know I remember when I was a kid there was an old ambulance over there in the dunes, you remember that Bodie?” Tommy asked.

“Sure, I remember that Tommy…it was over there about 300 yards, sat there for years…some folks said it was haunted,” Bodie told Tommy as he stared into the distance.

“Haunted?” Tommy asked... “We still planning on staying over here tonight Bodie? I don’t think that there’s going to be many flounder tonight, and anyway I betcha that Eloisa has a good crowd back at Haddon’s. Maybe we should just go back and you know, hang out for a while. I don’t think I brought my gig, and we don’t have a lot of beer and food,” Tommy babbled.

“You brought your gig Tommy Boy and we’ve got plenty of summer sausage, cheese and crackers and I’m not really in the mood for drinking beer tonight anyway,” Bodie said, his back to Tommy with tears rolling down his cheeks.

Bodie put the trout into the cooler and took the Coleman lanterns out of their cases. He checked the fuel level in each of the 202-Professional lanterns and then tied new mantels on them. He looked up and saw Tommy who was staring intently out into the dunes.

“Let’s have a bite to eat and a cold beer before we start floundering,” Bodie said. Tommy waded back to the boat and climbed in and without a word and started slicing summer sausage as Bodie whittled some cheese.

“I’m telling you what Bodie, I betcha Eloisa has some of those really big round steaks that she’s battering up right now to chicken fry, and that pretty little Sellers girl might be back in town and we might be missing out on some stuff,” Tommy said with tremble in his voice.

“We’ll have lunch there tomorrow, I’d like to do a little wade fishing after sun up and then we’ll head back in,” Bodie replied.

Tommy stared at the lights of Port O’Connor across West Matagorda Bay and thought of how nice and safe he’d be if he was at Haddon’s right now. He looked towards Port Lavaca and saw the lights at Point Comfort and thought about all of the people that were working at the Alcoa Plant there and how they had a lot of light around them. “Bodie I just don’t think we’re going to do any good and besides it’s really dark and I think I’ve got a stomach ache,” Tommy whined.

“Suck it up buttercup,” Bodie snapped, “there’s a passel of flat fish out there waiting for us and we need to go and get some of them.”

Bodie lit the old lanterns and when he was satisfied with the glow of the mantel he handed one to Tommy. He picked up both gigs, handed Tommy his and together they started away from the boat.

Bodie gigged a flounder not 10 yards from the boat and saw one right in Tommy’s path but Tommy was looking behind him and stepped right on the spotted fish. “Tommy pay attention to what you’re doing!” Bodie growled. “What in the heck are you doing looking behind you when the fish are in front of you in your light?”

“I heard something back there Bodie…it sounded like something hitting metal…you didn’t hear that?” Tommy asked.

Bodie shook his head and smiled to himself as he moved forward a few feet and stuck another flounder with his three-prong gig. Tommy ran into him and almost burned Bodie with his lantern.

Tommy skulked off a ways and saw a flounder lying on the sandy bottom. He stuck the fish in the head and reaching down under it to lift it up he forgot what he was doing and stuck his thumb into the mouth of the sharp-toothed flat fish. “Owwww Bodie, I got bit, my thumb got bit off, and with relief he added, we HAVE to go back to town now Bodie, I think I need a doctor,” Tommy cried.