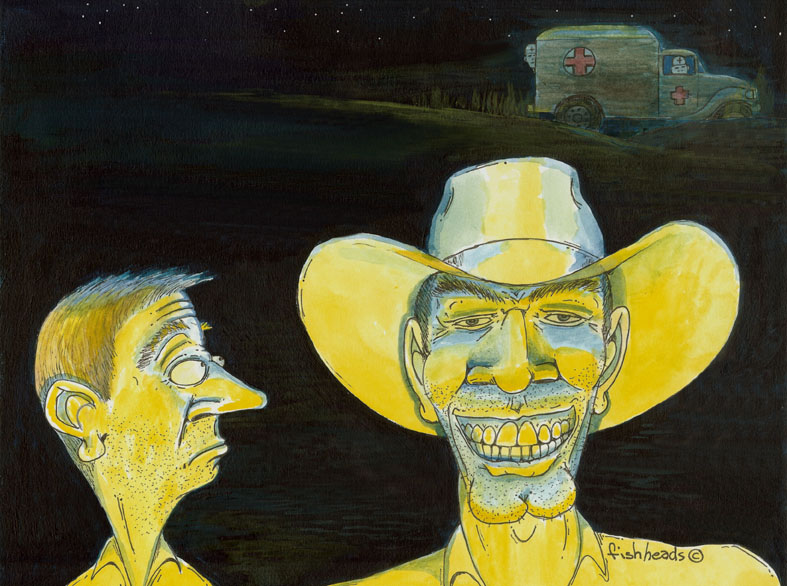 Bodie waded over and took a look at Tommy's finger. Blood had been drawn but it wasn't much more than a scratch. Bodie pulled Tommy's gig out of the sand and put the flounder on Tommy's stringer. "There's too many flounder out here to stop because of a little scratch like that Tommy, go on back to the boat and use the first-aid kit and patch it up. I'm going to move on a few hundred yards or so and then I'll meet you back at the boat. You might want to try wading the other way for a bit and see what you find near those sloughs," Bodie said.

"Oh and Tommyif any of those ghosts start shooting at you, you might want to get rid of that shell casing you found," Bodie added for effect.

Turning quickly so Tommy couldn't see the smirk on his face, Bodie started moving away. "Very funny Bodie, oh that's just hilarious, you should be on TV you're so funny," Tommy sneered.

Tommy stared off into the darkness, making out the stern light on the outboard of Bodie's boat and turned to tell Bodie that he didn't think his thumb was that bad, but Bodie was already a good distance away.

Tommy started wading back to the boat, only now and then looking for flounder, but keeping a good eye in the direction of the old ambulance. "Ghosts," Tommy half-heartedly chuckled out loud, "heck, there ain't any ghosts out here."

Tommy stopped and stared out into the dunes, his eyes trying to see into the darkness but the old Coleman lantern was killing his night vision. "That sure did look like a light to me," Tommy muttered out loud to himself.

Tommy stayed where he was for a good 15-minutes, just staring into the darkness turning now and then to look for Bodie and hoping that he was on his way back, but Bodie was so far away. Tommy couldn't even see his lantern light.

As Tommy started moving back towards the boat a shadow passed between him and the light on the boat and that stopped Tommy in his tracks! "That was just an old hoot owl is all that was," Tommy thought aloud. But still he didn't move for a minute, and then nervously he started forward towards the distant boat.

Bodie thought that for a minute that Tommy might have seen his flashlight as he made his way through the rattlesnake infested sand dunes, but as far as he could tell, Tommy was still staring at the boat and up towards where the old ambulance use to be. The bird flying between Tommy and the boat was pure luck and kept Tommy looking away from where Bodie crouched.

Tommy made it back to the boat and put his fish on ice. He looked around, but everything seemed peaceful and quiet with the stillness broken only by the splashing sound of something chasing mullet. Tommy decided to have a beer and some summer sausage and was digging in the ice chest unaware that Bodie was only a few dozen feet away in the pitch darkness. As Tommy pulled a beer from the cooler, he heard a loud BANG that rang out from the dunes.

"HOLY MOTHER OF ALL THINGS GOOD!" he yelled as his beer flew one way and the stick of summer sausage went the other. Tommy dove to the deck and crawled behind the center console as more shots rang out. In his mind he could hear the bullets thudding into the hull of the boat.

Bodie was in tears and laughing so hard silently he could barely breath, much less find the energy to stomp on another dried up and inflated Man-of War. He had to sit down and laugh into his shirt to keep Tommy from hearing.

As soon as he regained his composure, Bodie moved a few feet and started stomping on some more of the dried up stinging machines. POW, POW, POW echoed across the water and Bodie heard Tommy yell from the boat "I don't want your old shell casing, here you can have it back!" Bodie heard the old 40mm shell casing kerplashing into the water.

In his scariest and ghostliest voice Bodie called out "oooooooooo, who stole our shell?"

Bodie couldn't stand it much longer and quietly moved into the dunes and headed back for his lantern and stringer of flounder, tears running down both cheeks, laughing so hard he could barely walk.

A bit later, Bodie made his way to the boat and found Tommy curled in a fetal position between the center console and the leaning post. "You sleeping down there Tommy?" Bodie asked.

"Oh Bodie, Bodie, where HAVE you been?" I've been waiting on you forever and we need to get out of here Bodie, there's ghosts over here!" Tommy cried.

"Ghosts?" Bodie growled back in his manliest voice.

"Ghosts Bodie and they done shot your boat all full of holes and they almost shot me too, we've got to go home, Bodie, we have to go now!"

Bodie would have liked to spent the night but Tommy wasn't having any of it. In fact, Tommy was so scared and shook up that Bodie had to tell him what he had done. He had to show him there were no bullet holes in the hull and then took him up on the shoreline and showed him the Man-of-Wars that he had stomped on.

Still unbelieving and staying really close, Bodie found one of the stinging nasties still inflated and stomped on it so Tommy could hear what it sounded like. Tommy got mad but then told Bodie, "I knew it was you all along Bodie, and I didn't want to ruin your little joke, but I really am tired and I want to go home."

Tommy offered a few short nervous laughs but he couldn't convince himself, much less Bodie, that he wasn't scared.

Bodie punched some buttons on the GPS and just before he fired the outboard up, he and Tommy both heard what sounded like metal doors slamming shut and it was really a loud sound. The noise came from the direction where the old ambulance had been, out where there was nothing but sand.

Tommy looked at Bodie all wide-eyed but Bodie didn't say a word. He started the outboard and started following the track back to port at a faster than usual speed for night running. "What do you think that noise was Bodie?" Tommy asked.

"More than likely some aluminum floundering boat or something, Tommy." Bodie replied.

"I think it was ghosts, Bodie," Tommy said.