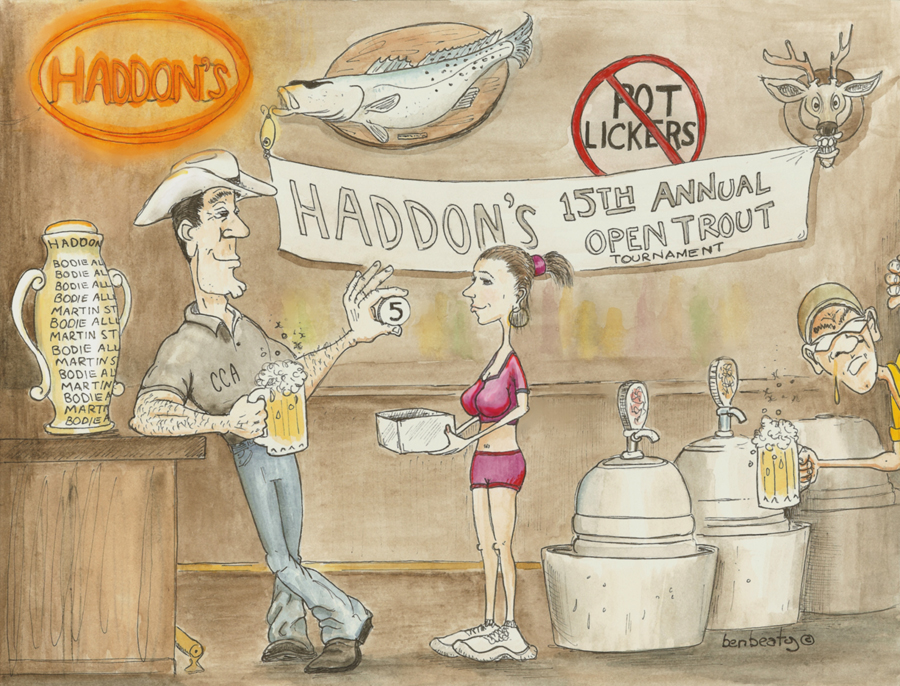 Haddon's Place was jumping for a weekday afternoon. Both pool tables were busy and the quarters were laid out along the rails of each, put there by players to insure they had a chance to play the winner. A sign on the wall behind the bar let everyone know that the 15th Annual Haddon's Open Trout Fishing Tournament was starting the next morning. Eloisa the bartender had already changed out two 16-gallon kegs and it looked like it might be a 4-keg day. They hadn't had a 4-keg day since Bodie Allen had caught the big trout that now hangs over the bar.

Fishermen from all over the state had paid their entry fee to compete for cash and prizes but most of them had their eye on the coveted Haddon Cup.

The Haddon Cup wasn't really a cup at all but that's what everyone called it.

In reality it was a nickel plated brass cremation urn that old man Haddon had picked up somewhere in Louisiana at a flea market and due to the size and the ornate decorations on it he thought it would be a good trophy to give to the winner of a trout fishing tournament he planned to start. Of course the old man never told anyone what the cup really was or else the winners might have thought twice about having that particular trophy sitting on their mantel for a year. Over the years, the various winners of his tournament were presented the "Cup" and had their names engraved upon it.

Bodie Allen's name was on the cup eleven times and to everyone who fished the tournament, he was the man to beat.

Bodie had been busy at the Lazy C ranch the past few weeks. Mr. Connor the owner had bought 1500 acres that bordered his place. Bodie being the foreman of the Lazy C had crews building new fence and water well crews working over three different wells. Every morning before daylight, though, and at the end of every hot day, tired as he was he fired up the outboard on his boat and hit some of his favorite spots for some pre-tournament fishing.

As Bodie eased the throttle back to let the boat settle down he noticed the nervous water at the opening of a narrow slough about 50 yards head of him. The slough had been named Reprobate's Slough years before after an old redheaded fishing guide that use to haunt the area. He shut the motor down; slipped the anchor over the starboard side and grabbing only a rod and reel with a pearl/chartreuse Skitterwalk on it, he stepped into the warm water.

If Bodie's ears were burning because someone was talking about him, then the hair on the back of his neck should have been standing up from the pair of eyes that were staring at him through binoculars.

"I told you that we'd get plenty of ideas of where to fish if we followed this guy.  He's a good friend of my brother Tommy and according to my brother he pretty much stays on big trout all year long. All we have to do is decide which spot we like the best and beat him to it on the morning of Haddon's tournament and collect the prize money and then get the heck out of this one-horse town."

Tommy Meyers was pretty excited and he was celebrating at Haddon's Place with his third mug of beer. His brother was in town from North Texas and Tommy had talked him into fishing Haddon's tournament. Tommy adored his older brother Vince and didn't get to see him very often these days.  He was only a little disappointed that Vince had brought a friend of his along for his visit.  Tommy had hoped that he and his brother could fish the tourney together but since he always fished it with Bodie and Vince had brought his buddy, Tommy had offered to let Vince use his boat for the tournament.

Bodie cast his lure ahead of a pod of baitfish and was walking it back when he saw some shrimp bust out of the water over a shell reef that ran next to a waste deep gut. He was watching the spot where he had seen the shrimp and was reeling his lure in fast when he felt resistance on his line and heard the explosion at about the same time. The big fish ran from the shallow slough and out to the deeper water of the bay taking drag as she went. Bodie knew she was a very good fish and let her have all the line she wanted. The trout pulled deep and then ran parallel to the shoreline and Bodie began to gain line back on his reel. After a while the combination of rod and reel won the tug of war and the well-fed trout was found itself in Bodie's strong right hand. The Boga Grip scale said 8 pounds and that thought Bodie might be good enough to get his name back on Haddon's Cup. Bodie removed the hooks and slipped the big fish back into the water watching as the fish swam at a leisurely pace back into Reprobate's Slough.

"Holy Cow, did you see the size of the fish that hick just caught," Vince asked his friend. "I mean that fish was HUGE and I'd be willing to bet my last dollar that there are always big fish in that slough, I mean why else would that rube fish there?"

"We catch a fish like that and the prize money will be ours. And believe me when I say that I did bet my last dollar; I used what money I had left to pay the entry fee." Vince's friend snickered, said something about just getting some more money from Tommy, then suggested that they get back to town and to Haddon's Place before the redneck saw them.

Bodie watched the boat as it made its way towards Little Margie's Cut. He lowered his binoculars and smiled. He had first seen the boat two days ago and knew the boat by sight. He'd had a feeling about Tommy's brother the first time he met him at Haddon's. Vince Meyers had bought beer for the table three times but left without paying his tab. Tommy picked up the check and made excuses for his brother but Bodie knew better; he'd seen plenty of guys like Vince Meyers in his lifetime.

Tommy waved at Bodie as the big man walked into Haddon's Place. There were so many people in the bar and Tommy was so short he didn't know if Bodie would see him but the big man smiled and made his way through the sea of yellow, blue, red and white fishing shirts to a table near the bar. "Did you hear that Eloisa had to tap a third keg of beer Bodie?" Tommy asked excitedly. "Yelling over the sounds of pool balls clicking, the voices of folks who must have learned to whisper in saw mills, and the juke box playing "Ain't Living Long Like This" by Waylon Jennings. Bodie said "That's a huge helping of beer for sure Tommy Boy; do you think they'll get to four?" Tommy blew beer out of his nose and dropped his beer mug snorting and sputtering and trying to get air back into his lungs "Get to four?" Tommy asked through the beer-induced tears. "Heck Bodie they only tapped four kegs in one day one time, and I don't know if Eloisa even has that many kegs in the place!"

Pam the waitress came by the table and set two more cold mugs of beer down for Bodie and Tommy. "Some crowd, huh boys?" She asked. "We have more entrants in this year's tournament than ever before and the prize money is going to be huge!" Tommy's eyes got as big as bait bucket lids at that bit of information and asked Pam how much first place was going to pay out. Pam said that they figured first place would pay out right at $2000.00 and beer once again found its way out of Tommy's nose and he snorted and sputtered as always until Bodie slapped him on the back and kept Tommy from choking to death.

A loud squealing noise filled the bar as Eloisa fired up the house band's microphone and announced that the drawing for positions was about to take place. In Haddon's Open Trout Fishing Tournament, poker chips with the tourney logo on them were imprinted with numbers. The chips were drawn from a large box by the captain of each boat and the number on the chip represented the order in which the boat would leave the harbor the next morning. The tournament allowed for two men to fish from the same boat but the weigh-in was on an individual basis.

Bodie being the current champion was the first to draw and the red chip he pulled from the black box had the number 5 stamped in it. And so it went until Vince Meyers drew his chip and pulled out number 3. A loud cheer went up from the crowd and Vince and his partner were giving high-fives all around.

"Tommy, do you have Reprobate's Slough programmed into your GPS?" Asked Bodie.

"Sure I do Bodie, but you know that nothing much goes on there these days, but why do you ask?"

"No particular reason Tommy I was just thinking about trying there first thing in the morning unless you have some other spot in mind?" Tommy didn't and he sure wouldn't have a better spot than one that Bodie had in mind so he said, "Nah, I guess if that old slough was good enough for old Red then it should be good enough for us too."

Join us again next month and we'll see how it all turns out for Bodie and his friends in Part - II of HADDON'S CUP!