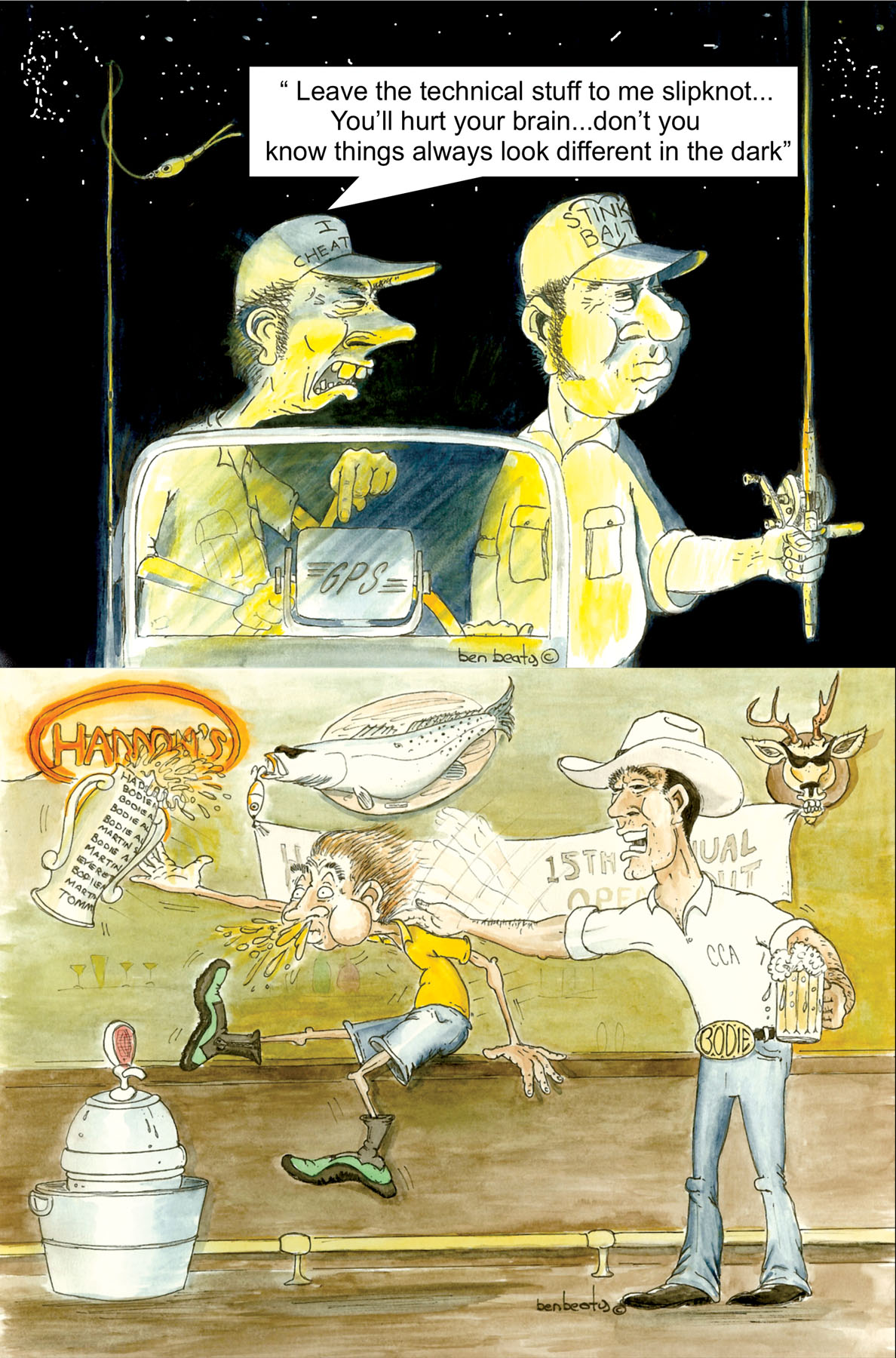 Last month, in Part I, we left Bodie and his buddies enjoying the pre-tournament party at Haddon's Place. The joint was jumping to say the least. Those who hoped seriously to win were draining their mugs and saying goodbye; some had other business on their mind, though. Let's drift back in and have another look...

Bodie finished his beer and said good night to his friends and fans and told Tommy that he had better get on home himself so he would be fresh for the tournament the next morning. Tommy said he was going to hang around for just a while longer but he'd meet Bodie at the boathouse on time.

Bodie watched from the door as Tommy sat down at the table where his brother and friend sat with some other fishermen then headed to his truck. Bodie turned his truck down the highway towards the ranch but changed his mind, made a u-turn and drove to Tommy's dock instead. He walked down the dock and climbed down into Tommy's boat and turned the GPS unit on. He paged to the waypoint named Reprobate Slough and then edited the numbers that were unique to that location. Then he cleared the track, turned the unit off and laughed a little as he walked back to his truck.

Vince Meyers fancied himself a pool player with 9-ball being his best "money" game. He made sure that anyone who would listen knew that he would play anyone in the bar for $100.00 a game; if they were stupid enough to take him on.

Vince got a taker.

Tommy's brother found himself in the hole to the tune of $800.00 before the guy that was beating him decided it would be a good idea to collect his winnings before shooting any more games. Vince turned a little pale and told the guy that he was just a tad short but that he was entered in the tournament and would sure bring the money with him the next day to pay up. Tommy knew the guy and told him that he'd make sure that Vince showed up so the winner agreed to collecting his money at the tournament.

"Vince what the heck is wrong with you gambling if you don't have the cash to pay off?" Tommy asked his brother. "Don't sweat it Tommy. When I win the tournament tomorrow I'll pay the guy back and besides that I know the guy was a hustler and I shouldn't have to pay him anyway but I will." Vince said. Tommy shook his head and told his brother, "You had better pay him. His Dad is the county sheriff." Vince Meyers turned even paler than he already was.

"Are you sure that this is the right way to the place that cowboy caught that big Trout Vince?" His partner asked. "Look dummy, all I have to do is punch this button that says Reprobate Slough and it shows me the exact way to the spot. Don't concern yourself with this technical stuff–you'll hurt your brain. Besides things just look different out here in the dark, things will look more familiar to you when the sun comes up now shut up and let me concentrate." Vince growled.

"I wonder where Vince was headed when he left this morning Bodie?" Tommy asked. Bodie smiled as waded towards the opening in the shoreline. "I don't reckon I know Tommy boy but the last time I saw his stern light he was heading out into the big bay." Bodie answered.

Bodie worked the Skitterwalk through a pod of mullet as Tommy cast his soft plastic bait towards the back of the slough. A big fish swirled on Bodie's topwater bait then knocked it a good foot out of the water but the fish missed and he reeled in to cast it back. Tommy felt his lure hang on what felt like an oyster shell so he jerked back as hard as he could only to feel the oyster pull back. His drag started squealing as the big fish sped past him and out into deeper water. "Don't horse him Tommy that's as good a fish as you've had on your line in many a day!" Bodie yelled. Tommy had chewed a hole in his bottom lip by the time the big trout had given up. The big girl laid over on her side as Tommy slid her into his net. "Bodie, Bodie, did you see it, did you see her, oh Bodie, this is the fish, this is the fish that will get me my name on that cup right along with yours!" Tommy screamed. Bodie waded over to where Tommy sat in the water, his legs having given out when he got the fish into the net and Bodie knew that it was a fish that could indeed win the tournament. "Tommy I think we should take that fish on in and get her weighed." Bodie said.

Vince Meyer's buddy told Vince again that they were in the wrong place. "We ran for over an hour to get here Vince and this place don't look nothing like that place we were at yesterday."

"These electronic units don't lie slipknot so just shut up and fish." Vince snarled. "If we don't win this tournament we're still broke and I owe that hustler $800.00 so unless you want your head broken along with mine we better find that big trout the rube let go."

Tommy and Bodie both watched the clock until the weigh in time expired and Bodie was just as excited as Tommy was when old man Haddon fired his Government model .45 into the air and declared the tournament closed. Tommy had won the 15th Annual Haddon's Open Trout Fishing Tournament by two pounds even and the Haddon's Cup and $2,000.00 was his. Bodie picked his friend up and sat him on the bar while Eloisa poured a cold draft beer over Tommy's head in celebration. Everyone cheered as old man Haddon handed Tommy the coveted Haddon's Cup and let him know that Tommy's name would be engraved right under Bodies as the new champion.

The celebrating continued with the paying of the second and third place winners and the beer was flowing and there was fish frying and everyone was having a good time. Three hours later Vince Meyers and his friend dragged into Haddon's looking worn out and defeated. The fellow that Vince owed money to met them at the bar and Vince flatly told the guy that he just didn't have the money but before things could get ugly Tommy stepped up and paid the $800.00 for his brother. Vince didn't say thank you or goodbye he just nodded to Tommy and he and his friend left.

Bodie looked at Tommy and told him that he needed to tell him something but Tommy interrupted him saying, "My brother had been following you Bodie, he told me last night after drinking too much that they'd seen you catch a good fish at Reprobate Slough and was planning on beating you there if possible so they could win the tournament. I couldn't let them get away with that so I changed the numbers in the GPS for the slough to the numbers for the Devil's Pocket." "Vince is my brother Bodie but I guess he's just no good, no good at all." "What is it you wanted to tell me Bodie?" Tommy asked. "Oh nothing Tommy, nothing that won't keep anyway, let me buy you a beer." Bodie said.

Tommy picked up the Haddon's Cup and twisted on the lid until it came open then handed it to Eloisa. "Fill her up for me Eloisa, I'm going to drink from the sacred cup!" Eloisa filled the cup from the tap and Tommy hoisted it over his head and yelled to the crowd, "Here's to Haddon's and here's to the best fishing partner a man could have!" The crowd cheered as Tommy drank from the cup.

Old man Haddon walked over to Bodie and said, "Hey Bodie, that's just plain nasty him drinking beer from that urn like that." Old man Haddon told Bodie what the cup had been originally and Bodie leaned over and whispered the secret to Tommy. Tommy blew beer out of his nose and dropped the old cremation urn and snorted and sputtered as always until Bodie slapped him on the back and kept Tommy from choking to death.