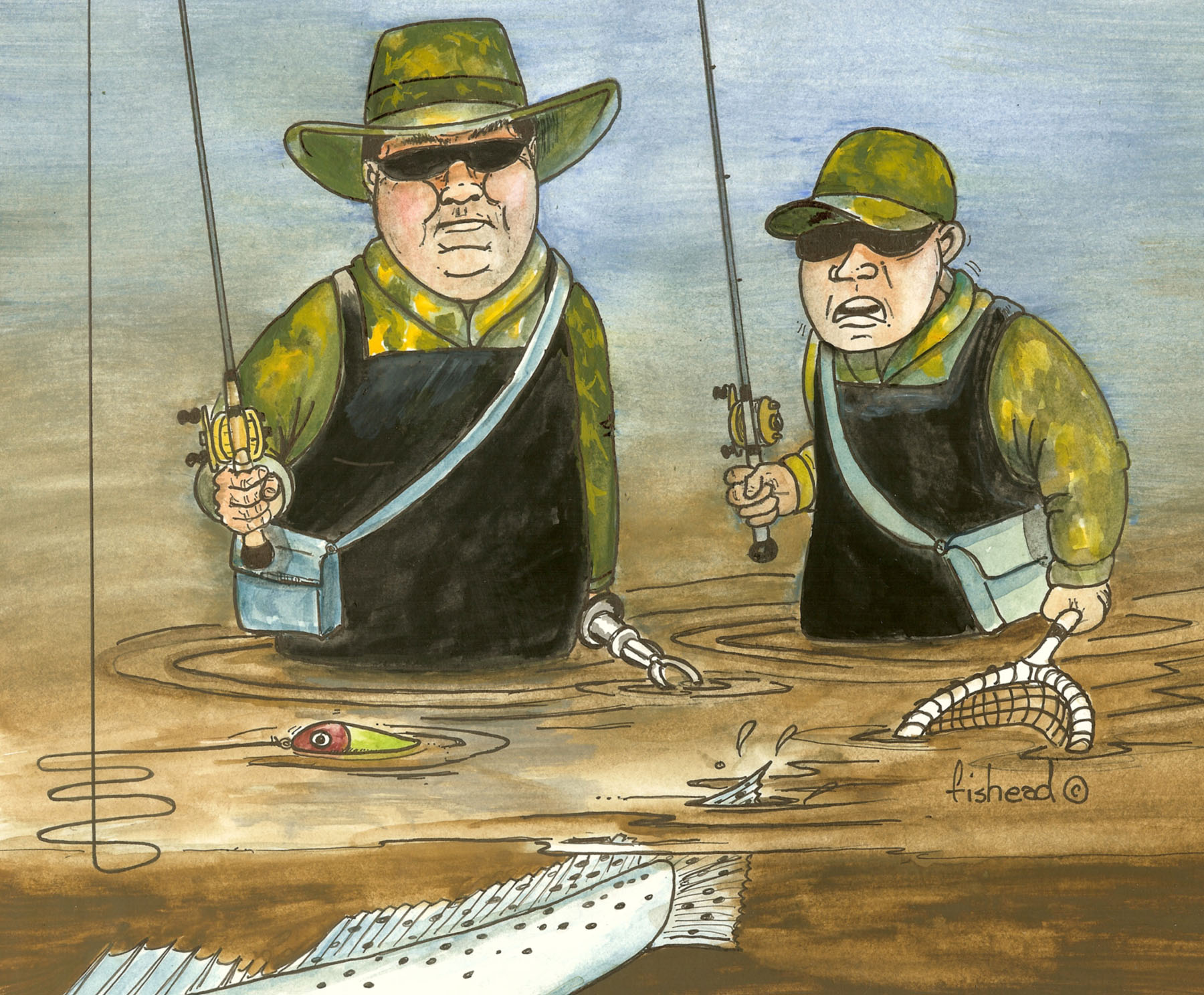 Baffin Bay calls to fishermen who want a chance at the trout of a lifetime. She flirts with you; reminding you that records have been broken in her waters and that she is capable of producing fish that will continue to break records.

Captain Aubrey Black idled the boat up to a wind-blown shoreline and set the StakeOut-Stick deep into the bottom of the bay. He'd been on some fish in this spot the past few days and wanted to give it a try. I wasn't optimistic; the water looked like chocolate ice cream that had been left out in the August sun for a few hours, but I wasn't staying in the boat. The northeast wind blew the waves into our backs, it was cold, and after twenty or so casts I thought that maybe my first impression of this spot was rightthen I saw bait that was in a really big hurry to get away from whatever was chasing it.

In February it's hit or miss when it comes to the weather and water conditions on Baffin Bay. You might get to fish between northers or you might have to fish while one is blowing. Unless you're independently wealthy and can go whenever you like, you pick your days and you take your chances. Personally, I like to fish Baffin just before or just after a cold front blows through. Of course if the fronts are blowing through regularly you'll either have to contend with the north winds or strong south winds that precede an approaching front.

I cast the Brown Lures Devil Eye lure behind the mullet that were moving from left to right and felt a tap when a fish picked the lure up and set the hook on a nice 20" troutokay so maybe I was wrong about the location. But that was the only fish I caught there. We picked up a few fish at this spot and then Aubrey told us to load up, we were going to another spot.

In Baffin from January through April every cast you make can result in having your name moved to the Right Side Of The Ledger, you know the side that holds the names of all the guys who've landed a beast of a trout. The chance of landing a double digit trout is why we endure the cold water, the muddy bottom, and those wonderful rocks that can trip even the most nimble fisherman and result in waders full of cold saltwater.

Cold and wet even though we wore waders and wading jackets, we shielded our faces against the cold wind as Aubrey ran the boat to our next fishing spot. After he "stuck" the boat we all bailed out and listened as Aubrey explained the area and where we should be fishing. The water was better here and I had the "feeling." Doug Sellers hooked up first with a nice 6-pound trout that he released back into the cold water. I really didn't watch who was catching what; I just concentrated on catching some of my own.

I felt some small rocks under my wading boots and was about to cast off to my right when I saw what looked like a shrimp skip across the water straight out in front of me. I cast the Devil Eye to the spot where the bait had just been and gave it a couple of twitches; as the lure settled I felt a tap but wasn't sure if it was a fish or maybe I'd bumped a rock. I set the hook hard and then "rock" started taking line off of my reel. My son and a friend were close to me when the big trout came to the top and we all saw what it was that I had on the end of my line.

I don't know about the rest of you, but I've lost a lot of really big trout in my lifetime. I've had them at hand and I've seen them but I've never gotten a pair of Boga Grips on them or slid them into a landing net; they've always given me the slip and thus the reason for my name not being on the Right Side Of The Ledgerall of that was about to change or so I hoped.

The big trout took line as she ran off to my right and she came to the top again and then pulled deep. I could feel her headshakes, trying to tear the offending hook from her mouth by scraping it on the sand and rocks on the bay bottom. She came back up and her tail was sticking up out of the water, which gave us another visual of how large this trout actually wasthe water was waist deep where I was standing.

The fish ran farther to my right and being just under the surface and we could see her length and her girthshe was without a doubt the largest trout I've ever seen, either in person or in photos. At that moment I began wondering how much the taxidermy bill was going to be when I took this fish in to be mounted.

My son Sterling had moved up close to me and told me not to try to get the Boga Grip on the fish but to use his wading net. We watched the fish sort of lay over on her side as though she was giving up. As I reeled in line and brought her closer she righted herself and then "rolled" up my leader much like I've seen catfish do. We watched the lure come out of her mouth and the behemoth swim away.

There is no way to describe how I felt at that moment and there really isn't any way our editor is going to print what I said at that particular point in time. I could almost hear the Keeper Of The Ledger erasing my name from the right side of the book.

Two hours later, Doug Sellers lost what looked like a 30-plus trout and all I could think to say to him was, "welcome to my world."

I tried to be a good sport about the whole thing and I thanked Aubrey for putting me on the fish of a lifetime and we all laughed and said the usual things like, "well, it's still out there maybe you'll get another chance at it, and just think, you saved some money by not having to get it mounted, blah, blah, blah."

As I wiped the tears from my eyes, caused by the cold wind don't you know, I realized that I was indeed lucky to have hooked that fish and just not lucky enough to have landed her.

Here's hoping that you'll get your name placed on The Right Side Of The Ledger some day and if you do, leave a spot open for me would you? I hope to have it there some day.