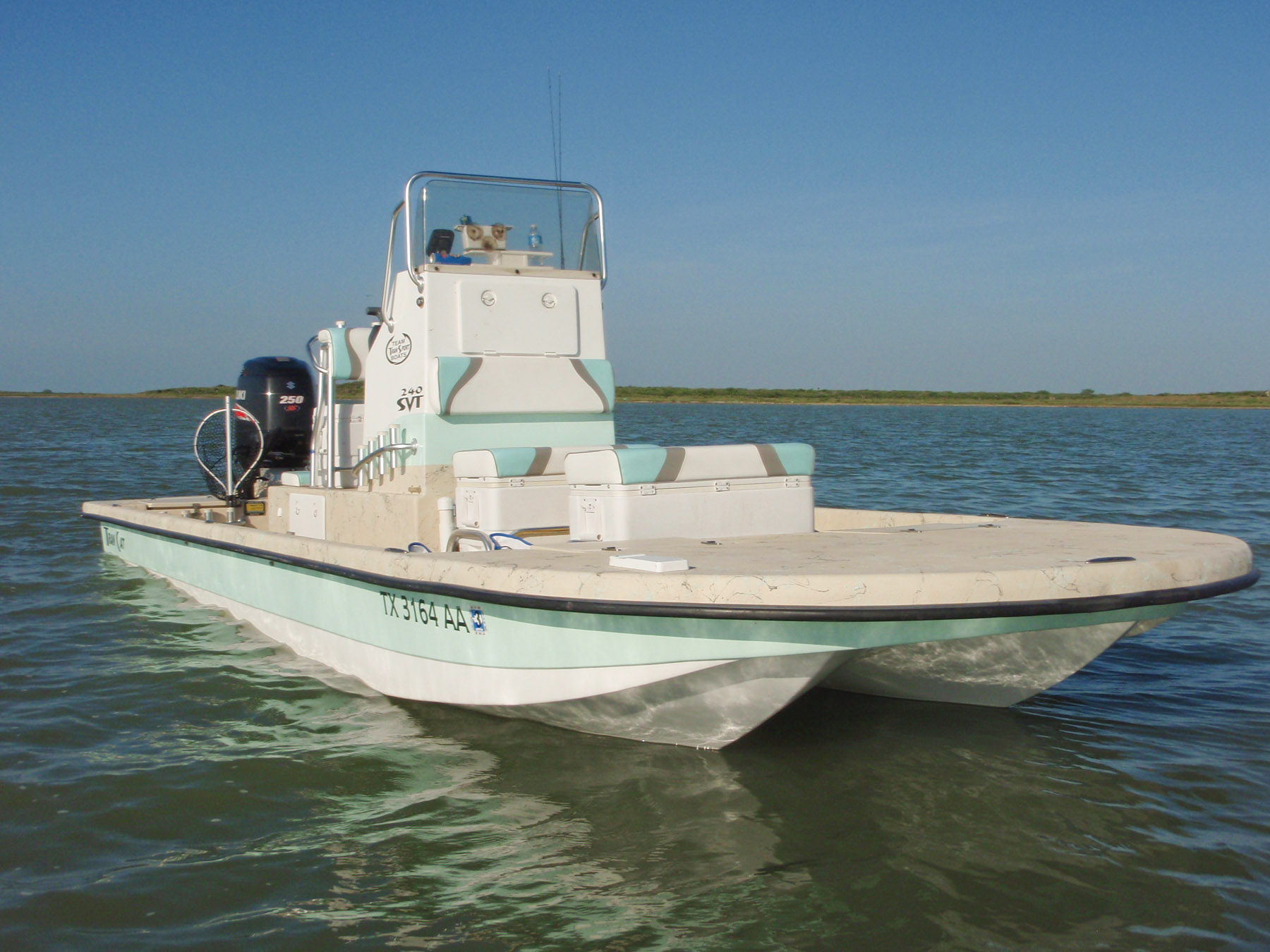 I remember when Dad gave me my first boat when I was thirteen. It was a walk-through windshield 1968 Glastron GT160 tri-hull with a 40 horse Johnson outboard. I terrorized Carancahua Bay for several years with it, learning all of the reefs, sand bars and the path up the Carancahua River. I caught a lot of fish out of that little boat and I certainly was proud of it.

I enjoyed so much those days when Dad would take me out and teach me how to navigate and point out all of the different things that a boater should know. I miss those days but I sure have enjoyed passing what I have learned on to my son.

There have been many boats in my life since then. The transition from the side-mounted consoles to the center consoles was cool to watch happen and, Oh Man, I have seen a lot of different types and styles of hulls come and go. But the other day I was able to run a boat that was nothing like anything I have ever owned or operated. See my son figures it's time for him to own his own boat and he has picked a real winner.

It started with discussions back in the winter about a different boat, one that would run super skinny if need be and one that would take the rough water like a deep V-hull does. I laughed and told him that when he finds that boat to let me know.

He found that boat.

In June we went down to Palacios to visit Donny Tran of Tran Sport Boats to talk to him about this new-to-us model, the Tran Sport SVT-24. The SVT stands for Split V Tunnel and what that Split V Tunnel does to the chop on a windy day is unbelievable.

Donny took us through the shop where he had a few SVT boats in various stages of construction. He showed us how the boat is built from start to finish and I was very impressed with not only the knowledge but with the meticulous care that is put into every boat his shop produces. My son Sterling had seen enough and was itching to run one on the bay and Donny was happy to accommodate him.

We unloaded at the East Side boat ramp into Tres Palacios Bay and Donny took the boat into the southeast wind, around behind Coon Island into Redfish Bay. He was on top and on plane, and out of habit I cautioned him about the reef that he was heading for. He smiled at me but he didn't alter his course. I got a tighter grip on a handrail and the boat skimmed over the reef and nothing touched the boat but water. I have never owned a boat that would do that. He showed us how the boat got up in shallow water, very shallow water, how it would stay on plane at very low speeds and we took up a lot of Donny's valuable time back in that shallow water. Then we went to deeper water that had a bit of chop on it and tried to make the boat get us wet - and failed. Donny showed us how the SVT hull allowed for fast turns with no sliding and no hint of shearing in a turn. We were impressed.

Back at the shop Sterling and Donny went over the specifications that he would want on a 24' SVT of his own and they spent a good while going over options and wants and Sterling came away with a quote for his boat. There was only one more thing we wanted to try and that was to take the boat to where we will use it as often as possible; Port Mansfield. So we extended an invitation for Donny to join us on a trip we were taking in July and Donny said that he would like to go and that his boat would go with him. Sterling was ecstatic!

A week before the trip to Port Mansfield Donny let us know that business would not allow him to go make the trip but he most graciously offered to let us take his personal 24' SVT with us to run, test and to treat as our own. Sterling accepted his generous offer. We were both stoked at the prospect of running this boat in the shallow waters of the lower Laguna Madre and man did Father Time ever slow down the clock; the days and hours crawled until the date of our trip.

We arrived in Port around lunch time on a Thursday and everyone was in a hurry to stow gear in the house, rig up our rods and reels, and get the boat into the water. Sterling wanted me to run the boat from the raised console so he could move around the boat and see how the ride was in the different seating areas. I quickly found out that I was going to have to learn to run a boat all over again.

Remembering some tips that Donny had given us I was able to overcome my ignorance of running the SVT hull and the 250HP Suzuki SS Four Stroke. In my defense I had never had a boat that from a slow idle would jump up on plane with no bow rise and that threw me completely off of my game. I said earlier that it was a beast of a boat and it is but it's as quick and agile as a cat, no pun intended. Seriously when you give that motor throttle you better make sure everyone is holding on or are sitting and secure, and make sure that you're holding on too; it scoots.

Of course everyone wanted to fish and I just wanted to run the boat, but after a few threats I finally headed to our first spot for the evening and shut it down. We made several drifts through what is usually a very productive area but only a few fish found their way into the fish box. We made a few moves from shallow to deeper and while two of us were looking for fish, Sterling and I were looking for challenges for the boat - and looking for fish.

The wind had come up that evening and when Sterling took us back to Port it was dark enough to have to use the running lights. With following seas I can say that the ride was, well, cushy. It just sort of floated at a high rate of speed across the rough water and Sterling said that there was no pulling left or right when the boat caught waves at an angle. He played with the trim tabs putting the bow down and the bow up and while the water was rough the passengers sitting in front of the console said it was a great ride.

We talked about where to go the following morning and then we talked about the boat, discussing what we wanted it to do. I can say for myself that after learning how to run it the SVT does exactly what I expect it to do, even more so. Sterling pointed out a few things that he would want different on his boat and we talked about options that he hadn't considered. The boat itself is well thought out, well designed, and very well made. Other than a few minor features Sterling wants added to his boat we wouldn't change a thing.

The Tran Sport SVT-24 drafts between 7 and 8 inches at rest and seems able to run safely in 5 or 6 inches.

The next morning we hit an area that should have been holding fish but after an hour and just a few blow ups no one had managed to hook up with anything that was legal to keep. While the other guys were still in the water I waded back to the boat and took a few pictures of the SVT in the water. Sterling took a few as well from a distance so you get a pretty good idea of how the boat sits in the water with the 8' Power Pole all the way down.

We ran the boat deep and we ran it shallow over three days. We got up in shallow calm water and we got up in rough deep water. We ran it fast across calm water and we ran it fast across rough water and the boat never failed to impress everyone aboard. And while the fishing was great, the catching was terrible. I must say though, having Donny's boat on this trip made up for the lack of action.

Sterling now has that feeling that I have been fortunate to have felt many times in my life. It's that feeling you get prior to owning a new boat. And Sterling gets to have his boat built from scratch and will be able to have it set up just the way he wants it.

What we have learned from talking to Tran Sport boat owners is that they not only build a good solid product but they also have excellent customer service both before and after a sale. That and knowing the company that will build my son's boat is only forty-five minutes away from us is huge in my book. I mean to buy a boat is one thing but to have the builder of that boat nearly in your backyard is priceless.

I'm excited to be part of this experience with my son. Going over the things that he wants on his boat, where he wants them and how he wants them set up is a lot of fun. Little things like raising the console to fit his 6'-4" height and raising the windshield and grab bar so he doesn't have to stoop too much to get out of the wind. Where to put the gauges, switches and navigation instruments…it's a hoot.

I can't wait to write an article someday soon about his boat and have you see pictures of it. I just hope he lets me run it now and then.