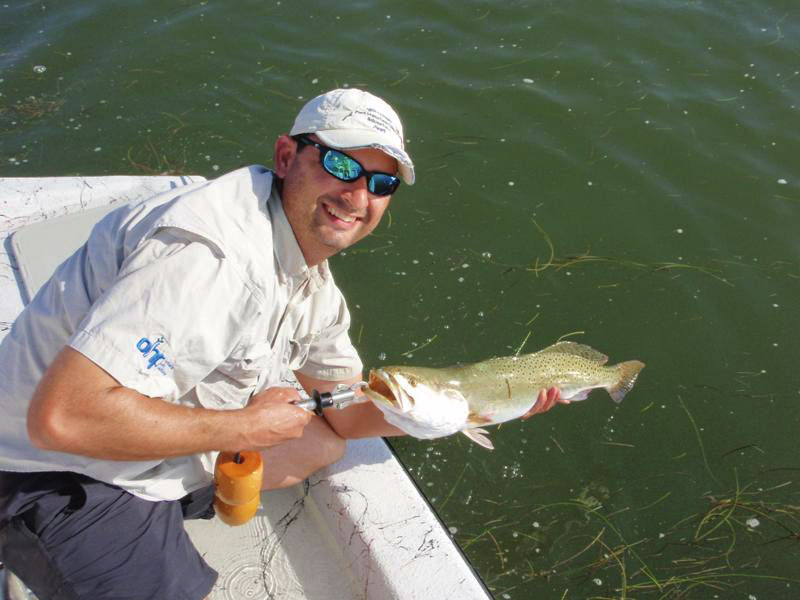 Robert preparing to release his lifetime best twenty-eight.
Quite often on the way home from a fishing trip everyone in the truck gets tired and quiet and my thoughts are all about what I experienced. The sunrises and sunsets, the fish that were caught and those that were not, the conversations and the "what if we'd have done this instead" comments all become a story and another chapter in my life. On long trips home those thoughts and memories all serve to keep me alert and awake and sometimes I'll even laugh out loud at the memory of something funny that happened. Everything that left an impression will play out again and the trip will be relived such as...

The mosquitoes were horrible at the boat sling and we were all doing the slap your legs, arms, and face dance so common with those of us who hate to use mosquito repellent. I wish someone would invent a super high-speed boat sling; seriously. It would come in real handy in the pre-dawn when the bloodsuckers are so happy to see a middle-aged fat guy and would also be really nice raising the boat at the end of the day. I don't know a lot about the mechanics of boat slings and the one I was using belongs to a friend who graciously allowed me the use of it (thanks Kim), maybe there already is such a thing. I have no idea.

The first evening in Port Mansfield we were headed to our first spot at 6:30 and it was non-stop action from the time we shut down until I had to turn my running lights on and head in. Phenomenal would be a good word to describe the bite we had going on and we were all eager to see what the following morning might bring. The mosquitoes found us on our way into the harbor and we couldn't stand it; we had to break out the repellent. Idling along, they swarmed the boat all the way to the sling and made filleting fish an unpleasant chore.

The next morning there was heavy dew on the truck and no wind whatsoever. Surprisingly there were no mosquitoes and we were able to lower the boat with no encore of the mosquito dance required. Likewise the trip out of Port was mosquito free and the wind picked up slightlygo figure. We ran back to the same spot that we had fished the evening before and I set up a drift on the same line that we had done so well on. There was just enough wind to move us at a nice fishing pace which is something we're not use to at all as we usually have two drift socks out and are still moving much faster than we'd like.

Then the mosquitoes attacked. Evidently they were hiding in every nook and cranny in the JH and when they converged they covered you. We were on fish and we didn't want to move, so out with the repellent again. I felt like a complete idiot spraying that stuff on my legs and arms out in the middle of the Laguna Madre and also knew full well I'd be in the water later to wash it off before the sun got up high. I hate the smell that much. A friend of mine was having the same problems with the bloodsuckers and had all of his people in the water, but even wading they were being attacked just the same. While their legs were safe they were slapping constantly to keep them off of their faces and arms. In over 40 years of fishing I have experienced anything like it.

The bite didn't last, the wind quit and it got way too hot, so we headed in for some much needed air-conditioning and lunch. Somewhere along the way back to Port we lost the mosquitoes and we jokingly wondered in whose boat they had made their new home. Looking forward to the evening trip we had a light lunch and a wonderful midday nap.
The wind was up a little for our evening trip, it wasn't blowing hard, but it was blowing enough for us to drift if we chose to. I think we caught one trout and we fished until dark-thirty. We tried several spots but nothing was there that wanted what we were offering. Oh there were a few small fish caught and a couple of awesome blow-ups on topwater baits and that was enough for us, but we never boxed a single fish...the catching was lacking.

That evening we took some trout fillets to the caf and had them fix it for us blackened and fried and it was excellent. It was nice not having to cook and during the R&R we were able to relax and plan for the following morning. We only hoped that it would be more productive than what we'd just experienced. It was.

That morning found zero mosquitoes in the boat which was almost as good as a topwater bite! We found the pattern and we caught a lot of fish, kept what we wanted for the box and decided to do a little exploring.

My son, Sterling, had found some interesting deeper water north of town on Google Earth and it was in an area that I'd never fished before. We checked it out and while we found no fish there to speak of, it holds promise and we enjoyed adding some new fishing locations to the GPS.

That afternoon we headed back to the same area that had been so productive that morning. The fish were there but evidently in a different feed pattern. The bite wasn't as active as it had been earlier in the day, but it was on enough to give us a productive trip. We called ourselves lucky again.

One of our crew, Robert Fernandez landed his personal best trout on plastic, a really nice twenty-eight incher that was photographed and released. Good job Robert!
That evening it was back to the caf for more restaurant food and some drinks, followed by packing for the trip home in the morning.

The trip home was as I mentioned above, very pleasant; remembering everything that made the trip memorable. The mosquitoes, the boat lift, the fish, the conversation, the food, all the friends we've made over the years in Port and seeing them again. Robert nearly knocking himself out on the ice machine I forgot to mention that and that he also caught a hardhead on a topwater.

Every little detail becomes a memory. Some I'll remember vividly for years, some I'll likely forget until reminded, certainly some will make us all laugh again around future campfires. Here's to the trip and the trip home!