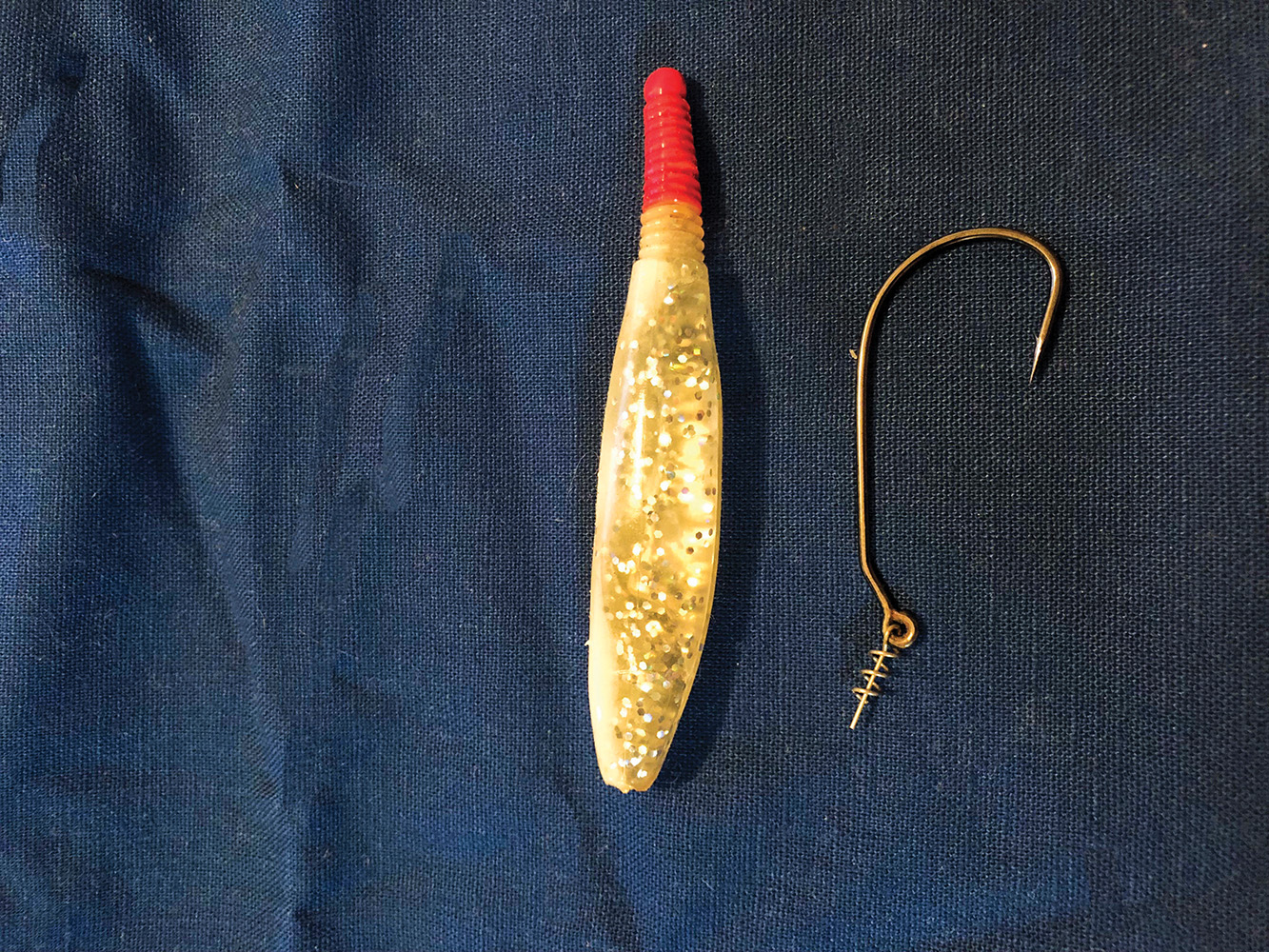 Author prefers to use Eagle Claw Trokar Magnum 3/0 Swimbait Hook. Note the angle of the point is above the eye – no bend modification required.

My selfish side has me wishing this lure would have never been made available to the public. I swear I would have done my best to keep the secret amongst only my family and a few trusted fishing buddies. The inventor obviously had other ideas, imagine that, and his creation is now selling like hotcakes via his website.

Most folks know it by its official name, Trout Support Lure, invented and marketed by Tobin Strickland. Tobin is the man who gave us the highly-popular Trout Support instructional DVDs for trout and redfish. My fishing group has unofficially dubbed it the “Grasswalker” for its unique ability to run “weedlessly” through loose seagrass suspended in the water column and floating on the surface. It also runs through bottom grass and oyster shell with nary a hang up where other lures dare not tread.

I was fortunate enough to get a few of these lures right after the current version came out of the molds and when I first saw the bait I thought it to be just another gimmick designed to catch anglers. And oh, it’s ugly, too. Absolutely nothing fishy about it at first glance. Boy, was I wrong!

Not only is this a weedless bait, I will quote the inventor describing some of its other attributes. “The lure is designed to be a slow-sink, walk the dog, soft plastic…not a topwater. On a non-weighted worm hook it likes to run just below the surface. Which, in a shallow water presentation, makes it easier for a fish to eat. There is basically no wrong way to fish it; walk the dog, fish it as you would a worm, or even slow reel it on a straight retrieve.” So far I have to agree with his description – fish it any way you like until you discover a presentation the fish will accept.

The Grasswalker comes in 5-packs, sans hooks; that choice is left up to the individual angler. Tobin recommends the Eagle Claw Trokar TK140-5/0 Swimbait Hook and advises bending the point upward just slightly to align with the top of the eye for improved hookup ratio. For what it’s worth, I prefer the Eagle Claw Trokar Magnum Swimbait Hook in the 3/0 size. They just seem to work better for me and my fishing partners with no bend modification needed. However, on the Trout Support website, you will find a lot of information regarding hook selection and modification advice.

Now, the hook style and size we have come to prefer, and also our preferred rigging method, are the result of having fished the Grasswalker with a variety of presentation styles and various water conditions – depths, structure types, etc. Having said that, what works for us may not work for you. You may find that rigging as per Tobin’s instruction on his website works best for you. Experimenting with hooks and rigging, even to include weighted swimbait hooks, is part of the fun of learning to fish a new creation. Think back to the days when suspending soft-baits first hit the market – almost everybody came up with their own best idea and most of them produced fish.

The Grasswalker is molded with what most anglers term a “belly slot” to facilitate weedless rigging. The accompanying photos show the lure rigged and not rigged so you get the idea. Another photo highlights the belly slot.

We rig so that the point of the hook comes up through the body and lies flat against the top surface, or back of the bait. A tiny bit of grass might hang on the slightly exposed point the way we do it but this arrangement greatly facilitates the point finding purchase inside the fish’s mouth where it eventually lodges in the tough jaw tissue. Even with this method, a more vigorous hookset is recommended than is commonly used with greatly exposed hook points we see on leadhead jigs and soft plastics.

By contrast, if the hook point is skin-hooked (very lightly tucked under the skin) in the top surface of the lure as is often recommended for greater weedless capability, much greater force in achieving a solid hookset would be necessary. Again though, ample instruction from the maker is available at https://troutsupport.com/product/trout-support-lure/.

As of this writing, the Grasswalker is available in the following colors: Bone Diamond, Chicken on a Chain, Coastal Gold, Golden Roach, PlumTreuse, Stinky Pink and WhoDini. We have caught fish on all these colors but my favorites are PlumTreuse, Bone Diamond and Stinky Pink. These three have produced a ton of speckled trout and reds for us. A photo of Jerry Richards is included with a trout caught on Stinky Pink still hanging from its mouth.

We fish the Lower Laguna Madre as often as possible and anyone who fishes there is aware of the floating grass problem and the way leadheads and topwater baits collect the stuff. Reeling in a soggy salad is not the best way to trick a wary game fish.

Not so with the Grasswalker! Thanks to the weedless rigging, this bait rarely collects more than a blade or two of the floating menace while retrieving it under or even across the surface of floating mats. The lure also casts like a bullet into the wind and the accuracy that can be achieved lends handily to sight-fishing.

I like to work the Grasswalker in different ways. Sometimes I’ll fish it the same as a soft plastic on a leadhead, retrieving line slowly while twitching the rod tip to make it hop. I also like to walk the dog with the lure running just slightly under the surface. Another presentation I use often is allowing the bait to sink and then sliding it along bottom, lifting with the rod tip to break the surface every couple yards or so. The possibilities are many and you’ll figure out rather quickly the style of presentation and speed of retrieve that works best for you. One of my friends casts it up-current and simply keeps the line tight, retrieving slowly as the current brings it back to him. He landed numerous trout while doing basically nothing more than chunking and winding slack.

In the photo of the lure, which is Bone Diamond, you’ll notice that I applied a coat of red tail dip. We have also experimented with chartreuse and yellow tails. Customizing lures with dips, dyes and paints has always been fun for me. For what it’s worth, the red tail on the Bone Diamond did very well for us, as did the PlumTreuse and Stinky Pink.

Friends on another boat were slaying reds and trout with Chicken on a Chain and Coastal Gold, so I’d suggest you buy some of each color and find which one is your favorite. Or works best on any given day. If you’re like me you’ll really want to try them all. The worst that can happen is that you’ll have to force yourself to change colors when you’re already catching fish. Or, do like my son Sterling, when his lure wears out from too many fish chewing on it he automatically switches to another color.

We’ve used the Grasswalker with great results along the deep cuts across the Lower Laguna flats, and also casting into shallow areas then working it out toward deeper water. We’ve used it in areas with lots of oyster shell where conventional lures will hang up on just about every cast…but not the Grasswalker. It just keeps coming back to you until a fish tries to take it away.

I have not yet had opportunity to fish the Grasswalker along any jetties but I’m looking forward to doing so next month. Having this weedless bait that I can cast up to the edge of the rocks and not have to worry about getting hung on granite is something I can’t wait to try.

In any case, it has been said that you can’t reinvent the wheel, and that may be true. However, Tobin at www.troutsupport.com has proven that you can reinvent the fishing lure. The U.S. Patent license he has been granted for the design of the Grasswalker is ample proof of that.