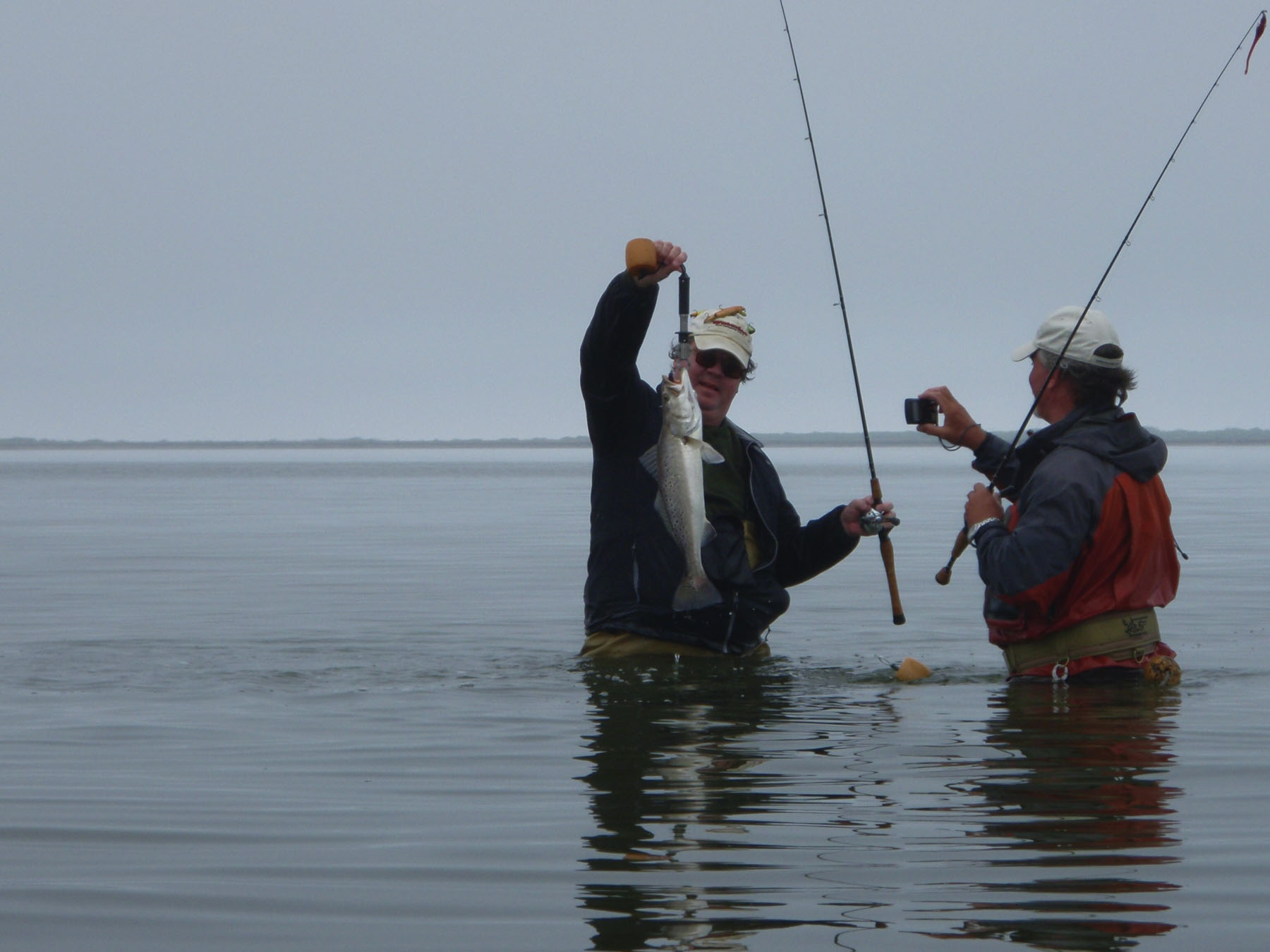 The water is cold, the fish always seem stronger and hungrier than during the summer and there are no mosquitoes to fight, on or off of the water. Oh and it's not hot enough to fry an egg on the deck of the boat.

There is just something special about winter wade fishing. Like in the warmer months the water can be crystal clear or muddy as a farm pond but there is a sense of excitement from the moment I slip into the water that isn't quite the same as it is when the water is 80-plus degrees.

Even with insulated underwear and warm-ups on I could feel the cold as the water squeezed my breathable waders tight against my legs. We'd had a cold boat ride in foggy conditions and I had completely lost my bearings but our captain knew where we were and so did the GPS.

It was one of those rare pre-frontal mornings when there wasn't a breath of wind and the water was like a mirror that reflected both the fisherman and the gear that he was wearing. My lure sent out ripples that I watched expand outward until the mist caught them and removed them from my view. On that morning the mist got heavier before it vanished with the rising sun and I couldn't see the ripples much less see my lure hit the water.

On mornings like that in Baffin Bay, there is always the chance that the trout of a lifetime will be near. One of those ledger moving fish that you know is there and, that you hope will find the lure you're casting worthy of a meal.

We covered the area, canvassed it really well but no double digit fish was home so the captain told us to load up and we'd head to the next spot. Once in the boat he was checking the weather and I noticed a concerned look on his face. The front that wasn't suppose to get to our area until noontime was moving faster than had been forecast so we needed to hurry as our window was getting smaller.

At the second stop of the morning, the fog and mist had broken up and we could see familiar shorelines and landmarks. We all spread out and started casting and picked up a fish or two but they just weren't there and the northern horizon was starting to turn darker than we would have liked.

Captain Black loaded us up and headed in; the front hit us at the ramp with the cold blast of arctic air that it carried with it. I think we were all happy to have the boat on the trailer and to be heading to a warm house and a hot cup of coffee, but I hated that the beautiful day had been cut short.

I think about that special morning often and there haven't been but a couple of days since that the weather was like that during the winter when I was able to go. But those days were special too and I have a picture of a beautiful sunrise on one of those clear cold days that I use as wallpaper on my laptop.

On those rare cold and still days when the water is like a mirror that reflects the fisherman and the gear that he or she is wearing, there is a stillness about it that appeals to me.

WITH AN APOLOGY TO CLEMENT CLARKE MOORE

Twas the morn' before Christmas and all through the bay
There were no boats running, no wakes being made.
So my son and I thought that we might slip away
To catch a few trout before Christmas Day.

The reels were all oiled with the drags set just right
And the She Dogs & Super Spooks were all shining bright.
The outboard hummed it's own Christmas Carol
And we pushed off from the dock with good lucks and farewells.

We eased the boat up to a favorite shoreline
And Sterling was out pulling anchor and line
He said to me "Dad, it's set good and tight"
And we both started fishing before the dawn's light.

The lure had landed not quite where I'd planned
But I worked it and reeled it and watched as it swam.
When all of a sudden there came such a clatter
That I looked over at Sterling to see what was the matter.

His rod was bent with the drag singing sweet
As he set both of his shoulders and planted his feet.
The trout was a good one of that I was sure,
Just one more victim for the She Devil lure.

My son played the fish until she rolled on her side
And he picked her up gently and said with a sigh,
"Dad she's a good one at least seven pounds"
And he let the trout go with not so much as a sound.

He looked up at me and I said with a smile,
"She fought a good fight & you showed some great style."
Then he checked his line and he let go a cast
And I thought to myself man they sure grow up fast.

And so went the morning and most of the day
Catching not keeping and then, on our way.
And I couldn't help thinking that all was just right
As we made the drive home on that Christmas Eve night.