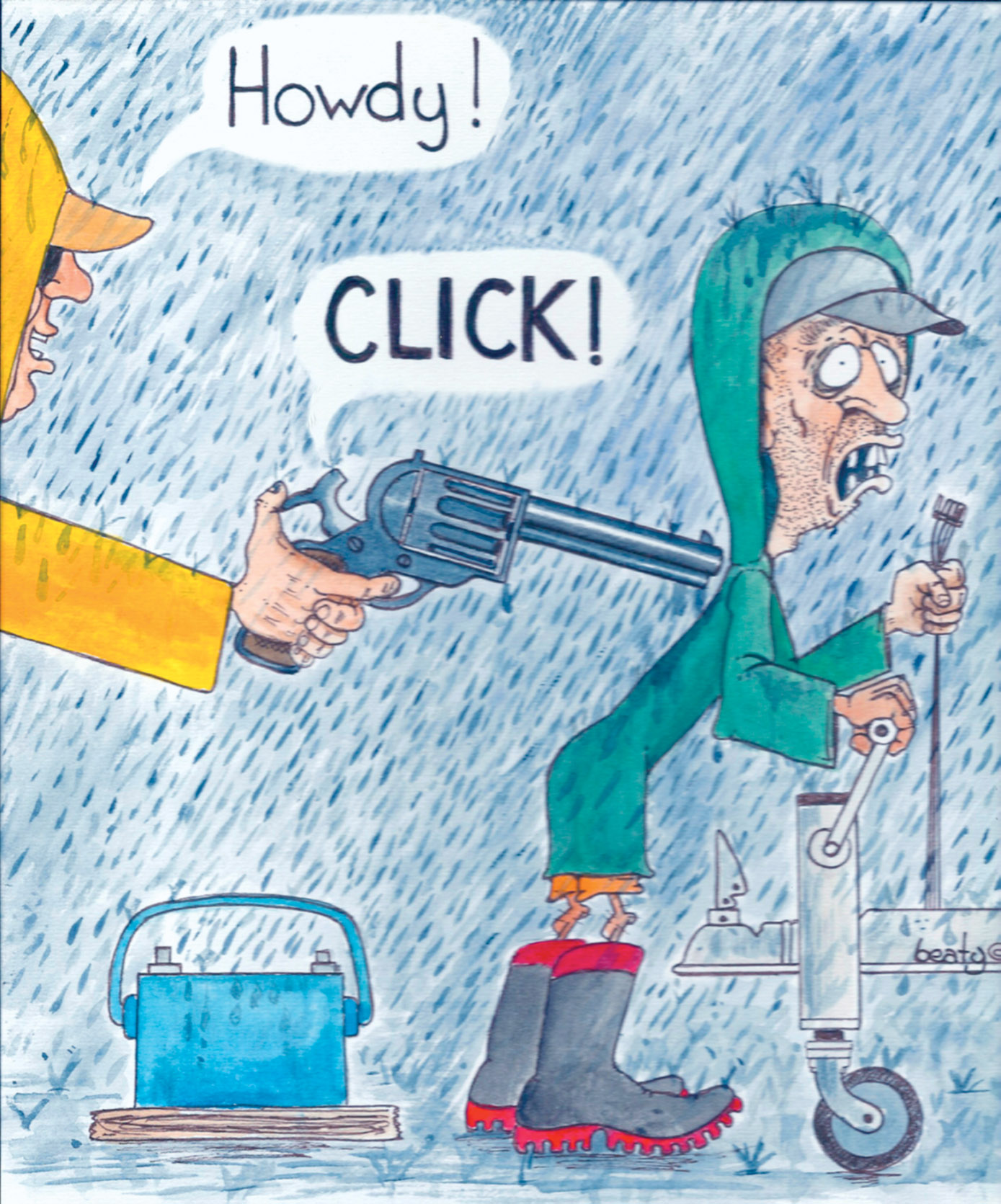 I really didn't notice anything until after I had tied the Whaler off to the pier and had started my walk up the ramp to get the truck. For reasons unknown, to me anyway, somebody had it in their head that my boat trailer would look better cocked as far to the left as they could move it and then set on top of a trailer that belonged to someone else. I looked around to see if anyone was reveling in my displeasure but there was no one in sight. I tried to move the trailer by myself but I couldn't do it alone. The wheels of my single axle trailer were across the low bunks of the other trailer and I couldn't lift it high enough to free it. As luck would have it a deputy sheriff pulled up. I could tell he wanted to laugh and deep down I probably did too but at the time I would have rather been able to put my very large hands around the persons or persons neck that had done this. With the deputy's help we freed my trailer and I got loaded up and headed home.

I tried to figure out a way to prevent someone from doing that to me again but I couldn't come up with any ideas. If the muscle is there its a simple matter to move and lift a boat trailer and while it never happened to me again there really isnt any way to prevent it.

I always used to put a bolt through the safety hole in the hitch on my trailer and secured it with a nut to prevent the trailer from coming loose from the vehicle while towing. It worked and I never lost a trailer until one day at a boat ramp. A friend and I were running trot lines up Sandy Creek out of Lake Texana and had unloaded at the ramp next to Highway 59. We had left at dawn to run the lines we had set the evening before and we found multiple catfish on each set. Around lunch time we arrived back at the ramp and I backed the trailer down while my friend ran the aluminum boat onto the trailer. The trailer tongue jumped off the ball and the only thing holding it on the steep ramp were the safety chains. Without the chains everything would have rolled down into the water, my friend included. He could have been injured and had I been standing closer to the trailer so could have I. A prankster had removed the nut and bolt from the hitch, opened the latch, then put the bolt and nut back in place. Why? It could have been a bad deal had the idiot removed the safety chains.

My solution to that was to start using a padlock on the hitch and I still use one to this day. So far no one has unscrewed the ball or stolen a trailer while the lock has been on it.

Years ago I had some friends coming down from Austin to fish. I finally got to the boat ramp and was getting the gear loaded while I waited for them to arrive. It was dark, the forecast was good for the day and then it started to rain. I don't mean a shower, I'm talking RAIN! One of those toad floating, blinding rains! I climbed in the truck and turned on my weather radio and listened to the man give the report for our area. "From Port O'Connor to Corpus Christi Today; clear skies, wind light and variable. Off-shore wave height one to two feet." Yeah, right.

My friends arrived and through the small crack the driver risked to open in his window; I yelled instructions for them to follow me to a local cafe for breakfast.

I bought breakfast; it was the least that I could do. The two guys were very understanding, saying that I couldn't control the weather and besides, maybe it would quit raining soon.

We told stories and caught up on current events, and just generally drove each other crazy for two hours while we watched the lightening and listened to it pour outside. Our waitress remarked that it hadn't rained that hard since the last hurricane. Imagine that.

My friends said that they would sure like to try again the next weekend and I agreed to take them then. I figured I could explain to my wife why I wouldn't be able to take her on that little shopping trip we had planned. So with handshakes and hugs, getting soaked on the way back to their car, they drove away.

I drank coffee and chatted with some locals for about 45 minutes after my friends left and the downpour stopped. Five minutes later the sky was clear and blue in the south and the winds were calm. Not wanting to waste the day, I decided to put the boat in the water and go fishing alone.

I floated the boat and tried to start the motor, grinding the starter until the battery went dead. That's when I noticed the fuel line was disconnected. I hooked it up and squeezed the primer bulb wondering who had removed it in the first place. I removed the terminals from the dead battery so I could hook them up to the new spare battery and the spare wasn't there. While we were parked at the cafe, in the pouring rain, someone decided they needed a new battery and battery box more than me.

That was another thing I couldn't find a solution for preventing short of locking the spare in the cab of my truck which I didn't want to do. Fortunately the boats that Ive had since have all had the batteries installed in lockable hatches, not sitting on the stern deck as they did in the old Montauk.

In this day and age when you just dont know who is packing a concealed handgun, it amazes me that anyone would pull any of the stunts I have related here. I know that it still goes on, I read about it quite often and I have to wonder what these people who steal from boats, who tamper with or damage someones boat trailers are thinking? Is a battery that doesnt belong to them worth getting shot over? Is messing with someones boat trailer worth having their worthless hide perforated? Evidently it is.

Be safe, be secure.