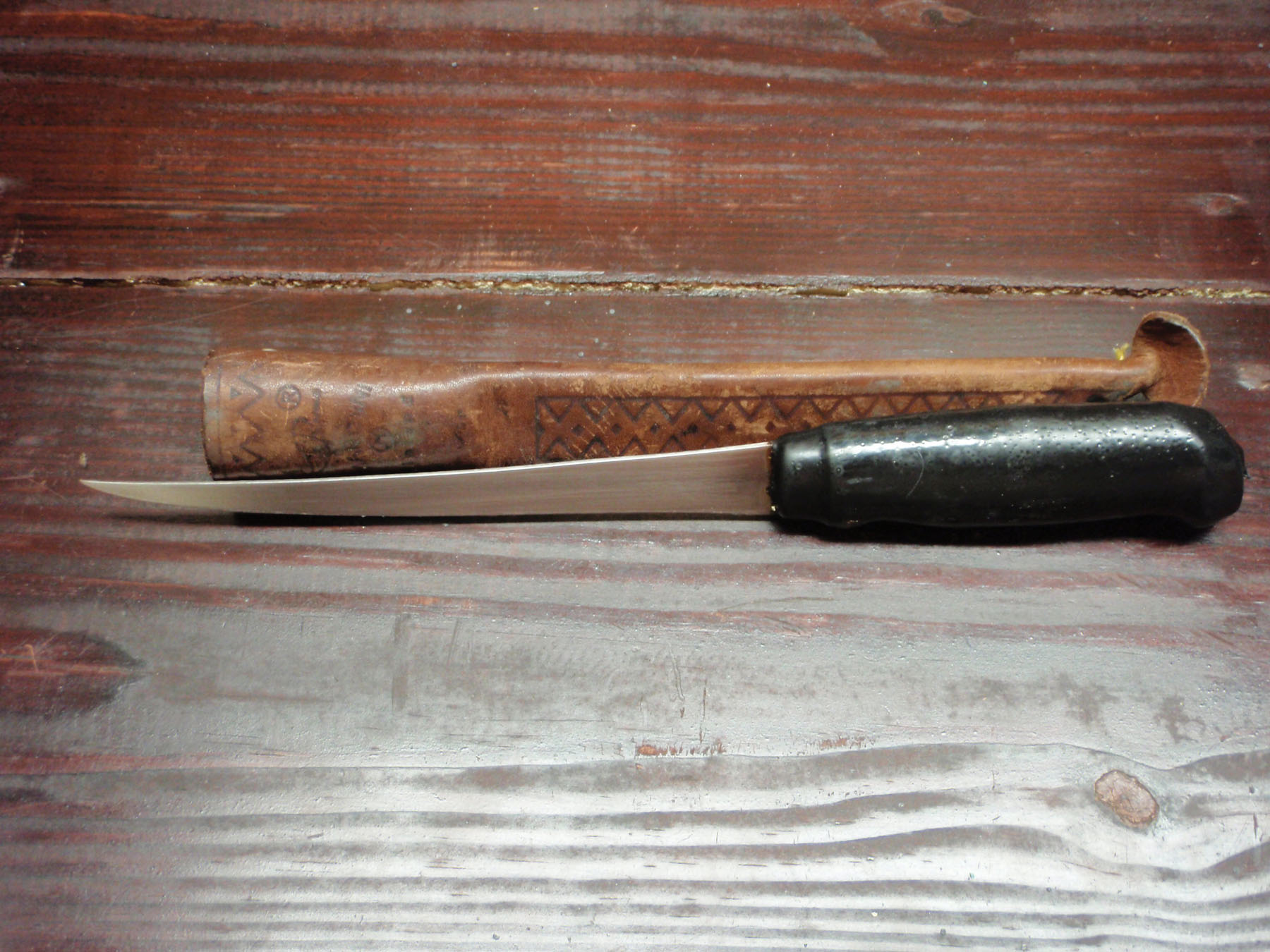 My electric fillet knife died. I was filleting a nice trout when all of a sudden it slowed, coughed twice, belched smoke and that was all she wrote.

After a hard life of filleting redfish, trout, flounder for the past two years and slicing up a lot of venison back strap, it finally gave up the ghost. I think that I went through five sets of blades for it although I can't remember for certain; it might have been more but certainly no less than five. Now all that I have left to remember it by is the neat little bloodstained and fish scale covered canvas bag that came with it when I bought it. (I added the blood and fish scales to the bag over time; they do not come with the knife so don't complain to me if you get one and yours doesn't have blood and scales on it.)

I had more fish to fillet but thankfully I keep my old trusty Rapala with the nine inch blade in my fishing bag. I hadn't used the Rapala in quite some time having put it away in favor of the electric knife that I thought would be faster and less maintenance than a standard old fashioned fillet knife. The electric knife might be faster for the first couple of fillets but once the serrations in the blades get gooked up with fish meat all bets are off. The fixed blade Rapala is faster for me.

The Rapala had been honed carefully when it went into storage so it made short work of the remaining trout and redfish that I had to fillet. The razor sharp blade sliced through to the backbone and then slid towards the tail in just an instant with no real effort and, with a flip of the blade to turn the fillet over and flexing the blade, a skinless fillet was ready to have the rib cage sliced away.

As I was rinsing the cleaning table my son remarked, "That old fillet knife is as fast as your electric knife." I think he's right.

The Rapala in the pictures has a nine inch razor sharp blade that has been worn down from years of sharpening but that still does what it is supposed to do. The original handle made of wood was starting to deteriorate so I dipped it in a neat product called Rubberize-It! which in addition to preserving the original handle gave me a non-slip grip when using the knife. I picked up a can of Rubberize-It! at my local hardware store but if you can't find any just Google it and you will find plenty of sources for this great product. It comes in a variety of colors and while I chose black to dip the handle of my knife in I think any color would work just fine.

I wish I could remember when I bought this particular fillet knife. I know that it is over twenty-five years old and it could be as much as thirty-five years old. That it is still around is a great testament to the quality of the blade itself.

Years ago electric outlets at public fillet tables didn't exist so I never gave any thought to using an electric fillet knife. But as the electric knife became more popular people starting wiring plugs on their tables and we started seeing more and more people using them when cleaning fish. Of course I had to have one and I do believe that the first electric fillet knife that I owned was a Mr. Twister. I stripped the gears on that one while working on a redfish and bought another the same day. That one slipped out of my hand on its very first trip before I could plug it in and is in a watery grave down in Port O'Connor. On each occasion this old Rapala came to my rescue and finished the job of filleting the catch of the day. You would think I would have gotten a clue wouldn't you? After all unless you have a generator with you, that electric fillet knife isn't going to do you much good after a long walk-in wade when you get back to your truck. But give me a piece of an old driftwood plank and that old Rapala and I'll turn the fish into fillets in just a few minutes.

I have other fixed blade fillet knives; a few other Rapala knives with different blade lengths that I keep in a drawer in my tackle room and a really sharp Dexter Russell with a serrated blade that I bought from FTU to use on redfish that also stays in my fishing bag. I won a really nice custom made fillet knife at a fishing tournament a number of years ago that was made by Bert Schoonover but that knife was requisitioned by my wife and it serves her faithfully in her kitchen. My friend Andy Seckinger made me a nice custom fillet knife that does a good job but I decided a while back to add it to my collection instead of using it; it's just too pretty and I would really hate if something happened to it. I just really like using my old Rapala; it feels good in my hand, it does a great job and it brings back great memories each time I pick it up.

With electric fillet knives you have to buy blades to replace the dull ones unless you have figured out how to sharpen them in the field quickly and easily. I have sharpened the dull blades before with a round diamond sharpener but it just takes too long to justify. A set of blades for my last electric knife cost me around twelve bucks and I'd rather pay the money than do the job of sharpening them. By the way, a new Rapala fillet knife with the nine-inch blade costs around thirty bucks.

About all you have to do with a fixed blade fillet knife is clean it well after using it and keep it shaving sharp, which if the blade is any good at all is no chore to do. To keep my old Rapala sharp I use the Warthog V-Sharp Classic sharpener. This handy and simple to use knife sharpener takes the guess work out of putting an edge on a knife. Once you have the sharpener adjusted you simply slide the blade through the V of the sharpener. Spring tension keeps the sharpening rods on the blade and all it takes is a couple of passes through the V to restore the edge. You can take a look at the Warthog sharpeners at http://www.v-sharp.com They make a nice carrying case for it and we take ours with us on every fishing and hunting trip.

Last June down in Port Mansfield I was wielding that serrated Dexter Russell I mentioned earlier while slicing redfish on the half-shell when something distracted me for a moment or long enough for me to slice across the middle finger of my left hand. There is a certain feeling that you get not unlike someone jabbing you in the rear with a cattle prod when the serrated blades of a very sharp fillet knife slice through the top of your finger and down across the bone. Your friends suddenly make awful faces and move away from you when the blood sprays from your finger as you try to turn on the water to wash your hands so you can do something about the wound.

I put the knife down and walked to my truck to get a paper towel to wrap around the finger to staunch the flow of blood while my friends finished dealing with the fish. I knew the cut was deep and that I would need stitches to close the wound but I was in Port Mansfield and a trip to Harlingen wasn't appealing to me at that moment.

About an hour later after cleaning and disinfecting the wound the cut stopped bleeding and while I held the wound together we applied New Skin liquid bandage and I kept holding the cut closed for about 10 minutes. We put more New Skin over the cut and after the second application dried I was good to go. If you don't have some New Skin in your first aid kit I recommend that you get some. It will seal a cut and allow you to continue to fish without worrying about some nasty bacteria getting into your system while you're fishing. It will peel off over time so continuous application on a deep wide cut is necessary. Oh and it is a lot less expensive than a trip to the ER and being sewed up. That evening one of my friends recommended that I buy one of those neat stainless steel thread fillet gloves. You can wear the glove on either hand and it will prevent you from slicing your fingers or hand when using the fillet knife. I haven't gotten one yet but I'm sure thinking about it. You can find one here; http://www.fishingtackleunlimited.com/p/fishing/c-/RAP-BPFG-P.html

Be safe and uhm… stay sharp.