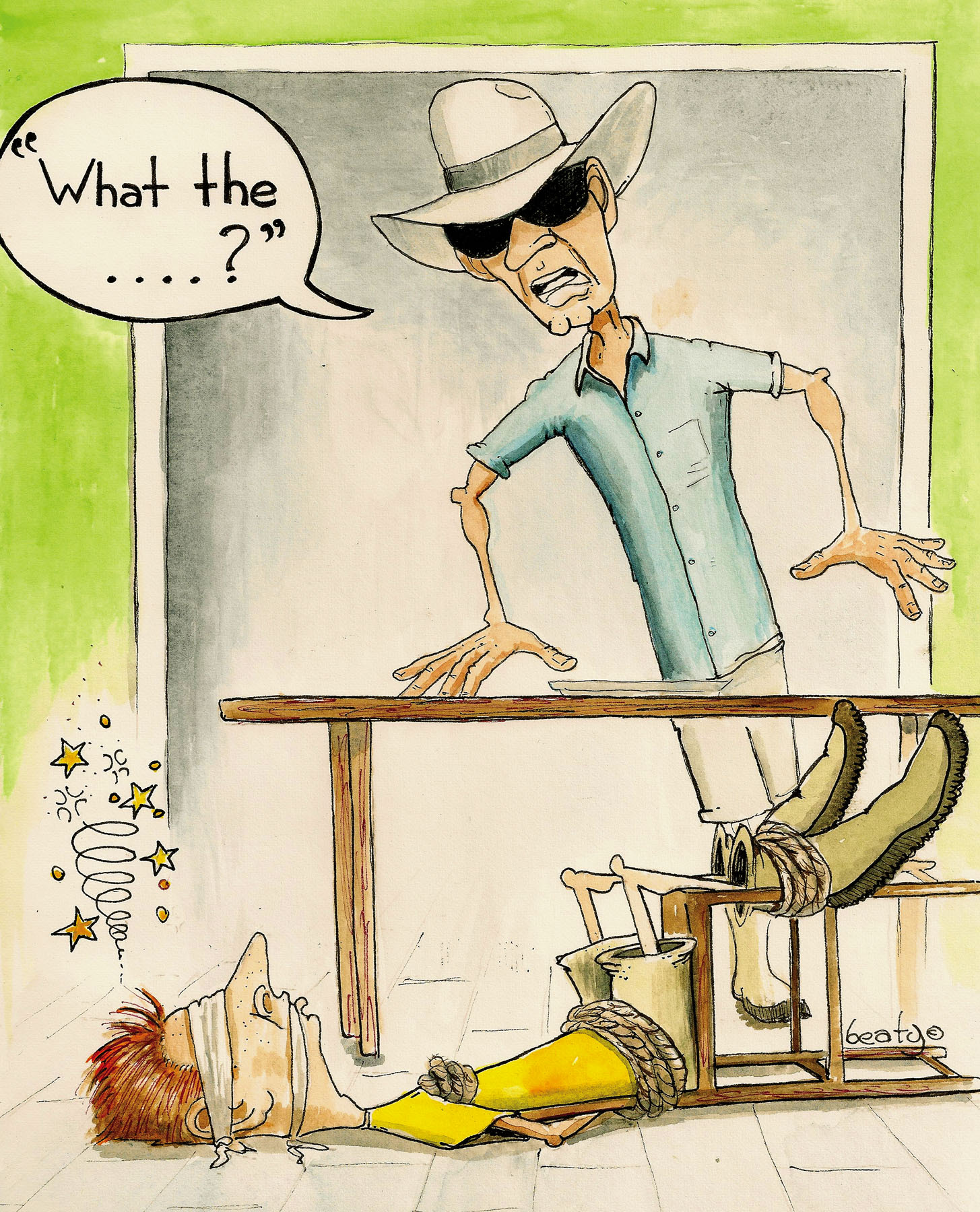 Bodie was mumbling to himself as he lowered his Tran SVT into the water; Tommy Meyers was late. Bodie had to drive out to the ranch early on to leave a tractor part for Monroe and Tommy was supposed to splash the boat and be ready to go when Bodie got there. The plan was supposed to save them some time so they wouldn't have to contend with other boats in their spot. That was the plan but Tommy wasn't there and didn't answer his cell phone.

Bodie had everything ready and with the big outboard idling he tried calling Tommy one more time, and again he got no answer. Angrily he put the boat in reverse, backed out of his sling then headed down the channel to the ICW.

"Gosh Almighty!" Bodie exclaimed loudly and turned the boat around. Tommy wouldn't be late for this trip and he'd dang sure answer his phone if he was able; something has to be wrong, Bodie thought. He pulled the 24' boat up into the slip and turned the switch to lift it out of the water, impatiently tapping his foot. "That's high enough," he said and jumped up onto the dock.

Bodie jumped into his truck and headed for Tommy's house. The porch light was on and Tommy's truck was there and the truck door was open. Bodie stepped out of his truck and checked the ignition of Tommy's truck and the keys were in it. Bodie started banging on the screen door half grinning at the thought of all the ribbing he was going to give Tommy for oversleeping for a fishing trip. "Wait until I tell Red about this mess."

Tommy didn't come to the door but Bodie noticed the main door was ajar; pushing it open he yelled for Tommy but no answer came. He was about to close the door when he heard a loud crash from the kitchen so he flung open the door and stepped inside.

Tommy reminded Bodie of a turtle on its back. He was blindfolded, gagged and his hands and legs were tied to a kitchen chair. Bodie quickly backed out of the kitchen ran to his truck for his .45 automatic. Checking the magazine and making sure it was cocked and locked with a round in the chamber he cautiously headed back inside.

He checked the house for intruders but all he found was a huge mess someone had made of Tommy's house. He cut Tommy's ropes and helped him into a chair. With his blindfold and gag removed Tommy looked pretty worse for wear. One eye was swollen completely shut and his other eye was heading that direction. His mouth was a bloody mess. Bodie quickly called for the EMS and Sheriff's department and then started talking to his old friend.

"What the hell happened here buddy; who did this to you" Bodie asked? Tommy shook his head and tried to say something as he passed out and slid from the chair. Bodie caught him and carefully laid him on the floor. He grabbed a blanket and pillow from a bed and made Tommy as comfortable as he could, then waited with his friend for the ambulance and sheriff's department to arrive.

The sun was coming up and Bodie was talking to the officers outside while the medics worked on Tommy inside the house. "Nothing we can do until we can speak to Tommy and find out what he knows," a deputy said.

"Someone sure tore his house up and if you look at the side of his face you'll see the imprint of a pistol magazine; someone pistol whipped that man," Bodie said in a controlled, quiet voice but inside he was anything but quiet. Someone did this to his friend, a man who would no more harm another person than he would himself, and that someone was going to answer to him if it was the last thing Bodie did.

One of the medics came outside and told Bodie that Tommy was in pretty bad shape. "Appears that he has a concussion, he's lost some teeth, has a broken nose and some ribs are broken or badly bruised; he's having a really hard time breathing" he said. "We don't want to transport him out in the ambulance because of the long rough driveway that we have to go down so Life Flight is going to transport him to Victoria." Bodie nodded his head and pointed to an open area with no power lines or other obstructions just south of the house and said that the helicopter could land there.

The Sheriff and an investigator named Dale showed up then and spoke with Bodie for a bit. They checked on Tommy then started going through the house which at that moment was now an official crime scene. "I'll need to get some toiletries and clothes for Tommy if it's okay with you," Bodie asked and was told to go ahead but to wear some gloves.

"What all did you touch when you went in Bodie" the investigator asked. "The handle on the screen door and the side of the main door since it was open; other than a blanket, pillow and kitchen chair that's it." Bodie replied.

The helicopter arrived faster than Bodie thought possible and he watched them stabilize his friend and fly away with him. Bodie got on his cell phone and called Red and a few more friends and told them what he knew then he remembered something. "Sheriff, Tommy has a safe in the back of the closet in one of the spare bedrooms" Bodie said.

"You have your deputy badge with you Bodie" the Sheriff asked? "Sure do Sheriff it's in my truck," Bodie answered. "Then go get it and put it on so we can keep this official," the Sheriff said. Bodie retrieved his badge and then slipped the case into the pocket of his fishing shirt as they went back into the house.

Bodie led the two lawmen to the bedroom closet and saw that the door was open and the light inside was on. Bodie glanced inside but knew what he would see. The false panel that hid the safe was down and the safe door was open. A quick inspection showed that only some personal papers and a few antique lures remained.

Did Tommy keep much cash in the safe Bodie," the investigator asked?

"Tommy kept a lot of money in that safe Dale, but what the exact amount was I surely don't know" Bodie said with a frown. "When Tommy's mother passed away she left a pretty sizable fortune but you couldn't tell that by the way Tommy lives. His mother's family owned thousands of acres of land west of Refugio and when her husband, Tommy's father, died she sold all of it and moved to Tilden to live with her sister. Tommy wasn't her only child, he has a brother named Vince, but he was bad news and was left nothing in the will. Tommy inherited all of her estate." Bodie explained.

Bodie paused for a second and then went on, "The bulk of the money is in banks and investments but it wouldn't surprise me to find out that there was a hundred thousand dollars give or take in that safe. Also, I noticed that Tommy's pistol isn't on the night stand next to his bed and that's where he always kept it."

"Well one thing is for certain," said Dale. "What's that," asked the Sheriff. "That safe wasn't broken into, it was opened with a combination and someone got that combination by damn near beating Tommy to death," Dale said with a frown.

The three lawmen surveyed the crime scene that was Tommy's home and took a lot of photos. They fingerprinted the truck doors, the safe door and everything they could think of. Bodie walked around looking for anything unusual but everything was such a mess all that he could think to do was to tidy up a bit. "If y'all got all the pictures you need and wouldn't mind, I'd like to straighten things up just a bit" Bodie said to the lawmen.

"Pretty sure I got everything we'll need Bodie so you do what you need to do," Dale said.

Bodie was picking up some framed pictures that had been knocked off a dresser and noticed that he was in most of them. There were pictures of him and Tommy holding fish, Tommy helping to hoist the Haddon Cup and pictures of him, Tommy and Red. Bodie got a little misty eyed and walked out into the yard a ways from the house. His foot hit something hard and when he looked down he saw a bloody Colt .38 Super laying in the grass. Bodie yelled to the Sheriff and Dale to come have a look.

"Looks to me like a vehicle was parked here and this was dropped when someone was getting into it," the Sheriff said. Examining the weapon all three noticed that one of the grips was broken and they knew that whoever did this had pistol whipped Tommy with his own weapon.

"So someone knew that Tommy was going fishing this morning. They waited on him to leave the house, grabbed him when he was getting into his truck, then took him back inside," the Sheriff surmised aloud.

"Sounds about right but everyone that was in Haddon's last night would have known that," Bodie said.

"Did you notice anyone in Haddon's that wasn't familiar to you last night Bodie," asked Dale.

"Heck Dale, there are more unfamiliar faces in town these days than folks I know," Bodie replied.

Bodie signed the tag on the evidence bag that held Tommy's pistol and said he would check in with the department later that day. He finished straightening up the house, locked it, and drove over to Red's house. Red took one look at Bodie and said "Let's go get some coffee and some lunch and then you can talk to me." Bodie nodded his head in agreement. "But let's find out how Tommy is doing on the way to the caf" Bodie said.

Bodie had to call the EMS to learn which hospital Life Flight had taken Tommy to. He called the hospital and found out that Tommy was in ICU; no information concerning his condition could be given over the phone. Bodie thanked the lady, hung up and asked Red if he felt like getting some coffee to go and some lunch later in Victoria.