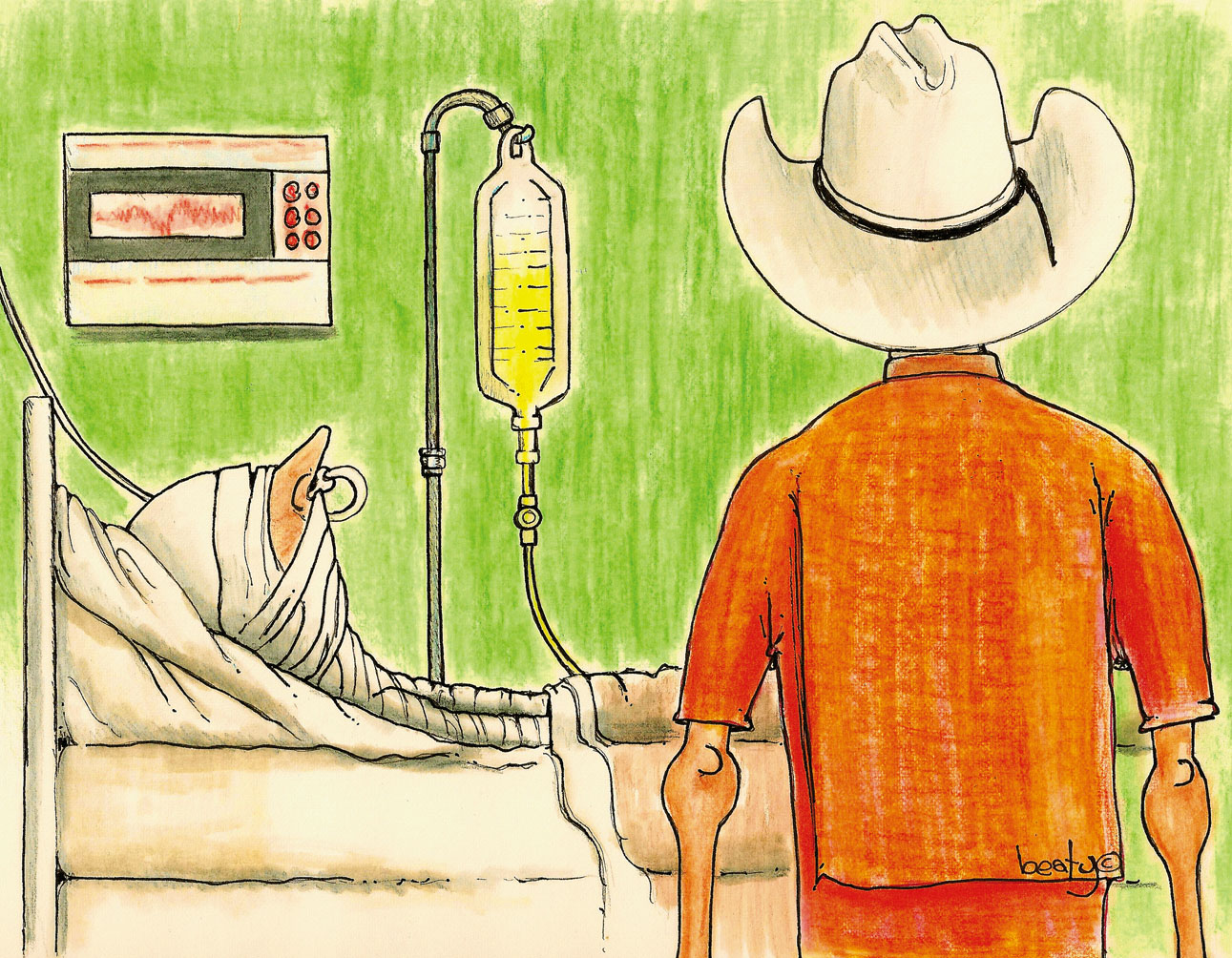 “So Bodie…any idea who would have known that Tommy had a safe in his house and kept a sizeable sum of money in it?” Red asked as they drove down the highway toward Victoria.

“Your guess would be good as mine, Red. But—I believe you’re on the right track,” Bodie said.

The two friends drove on in silence, each going over things in their mind and trying to come up with a name or a face of someone who would do something like this to Tommy.

They both pretty much ruled out anybody local but, who from out-of-town? Tommy had so little contact with the outside world, rarely went anywhere and almost never mentioned friends or family from out of the area since his mother had passed. Tommy led such a plain life who could have known he was wealthy?

“Hell, Red; you, me and Mr. Connors are the only ones in town who know of Tommy’s inheritance—as far as I’m aware,” Bodie offered, thinking aloud.

The pair arrived at the hospital and inquired at the information desk about their friend. “Are you family?” the attendant asked.

“No we’re close friends; my name is Bodie Allen,” Bodie told the woman.

“Oh you’re Mr. Meyers emergency contact person, Mr. Allen, so I can tell you that Mr. Meyers is still in ICU,” she replied “If you will take the elevator to the second floor you can go to the nurses’ station there and they can give you more information but, only you can go up, Mr. Allen” she said almost too cheerfully.

Red told Bodie to go on up, and he’d find the cafeteria.

Stepping from the elevator Bodie looked down the hall and saw a desk with people milling about. He stepped up and inquired about Tommy Meyers.

“Are you family, sir,” a nurse asked?

“No but I’m his emergency contact, my name is Bodie Allen.”

A middle-aged man in surgical scrubs stepped from behind the desk and introduced himself as Dr. Hanson, Tommy’s primary care physician and invited Bodie to step into the lounge so they might speak privately. Bodie accepted and followed him into a room with vending machines, microwave ovens, tables and chairs. Bodie slid a chair out, sat down, and waited for Dr. Hanson to fill him in.

“Mr. Meyers has a severe concussion with some swelling on his brain, several broken ribs, an orbital fracture or fracture of the eye socket, and some broken teeth,” the doctor told Bodie.

“An ophthalmologist has looked at his eye and a dental surgeon checked his teeth but neither can offer much help until the swelling has gone down. In my opinion he’ll need dental surgery and quite possibly surgery to repair the damage to the orbital rim and floor around his eye but the most important thing at the moment is the swelling on his brain.”

Bodie was taking it all in as the doctor continued, “At the moment we have seen an improvement with the swelling, there is no bleeding on the brain, and the neurologist doesn’t think that any surgery will be necessary as long as that improvement continues.”

Bodie sighed audibly; he suddenly felt very tired. “So how long of a recovery are we looking at here Doc?” he asked.

“If the swelling continues to go down and his overall condition doesn’t deteriorate for some reason, he should be out of ICU in less than a week and into a room. From there it will be a long road to recovery due to the damage around his eye and his dental problems. I really can’t say how long that might take,” Dr. Hanson added in conclusion.

Bodie nodded his head and asked if he could look in on Tommy.

Tommy was lying motionless with hoses and wires attached every which way. His face was swollen to a frightful state and Bodie had a hard time recognizing his friend with all the gauze and bandages that were in place. A heart monitor next to Tommy’s bed made beeping noises and there was a breathing tube in his mouth. IV tubes ran from Tommy’s hands up to bags of fluid that hung above the bed and Bodie felt tears running down his weathered cheeks.

Bodie walked to the bed and took Tommy’s hand, gently squeezed it and thought that he felt Tommy squeeze back. The nurses hovering so closely and their looks of concern told him he really should leave.

“So what’s the word on Tommy?” asked Red when Bodie found him in the hospital cafeteria. Bodie explained everything that the doctor had told him and about how terrible Tommy looked with all the tubes and wires running in and around him. Red could see that Bodie was really shaken up by the visit to ICU and suggested that they go grab something to eat.

“I’m starving. Let’s go find something to eat and clear our heads a little,” Red suggested.

“I’m not really hungry, Red, but I do need to eat,” was all Bodie said.

Bodie and Red got a table in a small Mexican restaurant, ordered two beers and food, and then started going over what they knew.

Tommy had to have known the person or people who robbed and beat him. And whoever it was must also have known of the safe built into the closet wall, and the large sum Tommy kept in it. Most importantly, the person or persons were absolutely ruthless.

“When we find them, and we will eventually, they’re going to have to spend some private time with me,” Bodie said while looking Red straight dead in the eyes.

Bodie headed to the Connor ranch after Red dropped him off. He filled Monroe in on what he knew about Tommy’s condition then called Mr. Connor and asked if he could drop by the house to speak with him.

“I guess you’ve heard about Tommy Meyers, Mr. Connor” Bodie said to his boss. “I heard about it, Bodie, and you do whatever you need to do to make things right for that boy,” Mr. Connor told Bodie sincerely.

“I need to line Monroe out on some things and we need to talk about replacing the chute and head gate on pasture #6 but other than that we’re okay,” said Bodie. “I’ll never be very far off and will earn my keep as best that I can until we can get Tommy back home, and I sure do appreciate you’re understanding my situation,” Bodie said.

Bodie drove down to pasture #6 and looked at the ancient Powder River head gate. He did some measuring, wrote down some numbers then made a call to a feed store that got most of the ranch business.

“Art’s Feed Store, this is Vince, how can I help you?” came the voice on the other end of the line. Bodie sat staring through the windshield of his truck with his mouth open and cell phone to his ear and then stuttered that he would call back. Bodie disconnected from the feed store and called the Sheriff’s office.

“Betty, this is Bodie, I wonder if you can help me out please,” Bodie asked of the dispatcher when she answered the phone.

“What do you need, Sugar Plum?” Betty asked.

Bodie grimaced at the Sugar Plum reference but had to hand it to Betty, who at 60 still had plenty fire left in her.

“Betty, I need some information on one Vincent Meyers who last I knew was living somewhere in North Texas” Bodie said. “I don’t have a town but if you run into a lot of the same names just print them all out and I’ll stop by and pick through the list,” Bodie said.

Bodie’s next call was to Dale, the sheriff department’s investigator who was working the case.

“I don’t know why I didn’t think of it before but, Tommy has a deadbeat, borderline criminal brother named Vince who lives or lived somewhere up in North Texas” Bodie told the investigator.

“You mentioned he had a brother when we were at the scene, Bodie, but I haven’t gotten around to checking family leads yet; it’s next on my list,” Dale informed him.

Bodie drove to the sheriff’s office, parked his truck, stuck his pistol into the waist band of his jeans, put his badge holder in his pocket and walked inside.

“Sugar Plum, is that you?” asked the lady at the dispatcher’s desk.

“Betty I wish you wouldn’t call me that, it’s embarrassing,” Bodie said with the best smile he could manage.

Betty winked and handed him a stack papers.

“That’s everybody I can find referencing Vincent Meyers in the state of Texas,” she told Bodie.

Well this is going to take a while, Bodie said to himself.

“I sure do appreciate it, Betty, and I’ll buy you lunch soon,” Bodie said.

“I’d much rather you buy me breakfast but I’ll settle on lunch,” Betty said sweetly with a nod and a wink.

“Howdy Sheriff, Dale; I wanted to let you get some copies of some information that Betty pulled up for me on all of the Vincent Meyers that are located in Texas.”

“I appreciate it Bodie,” Dale said. “But strange enough, it seems that one Vincent Meyers just bought a new pickup in Corpus Christi, and paid for it in cash,” Dale added. “The Sheriff and I were just talking it over, and were wondering; How’d you’d like to take a ride down to Corpus with me first thing in the morning?”

“Is daylight here in the parking lot too early?” Bodie asked.