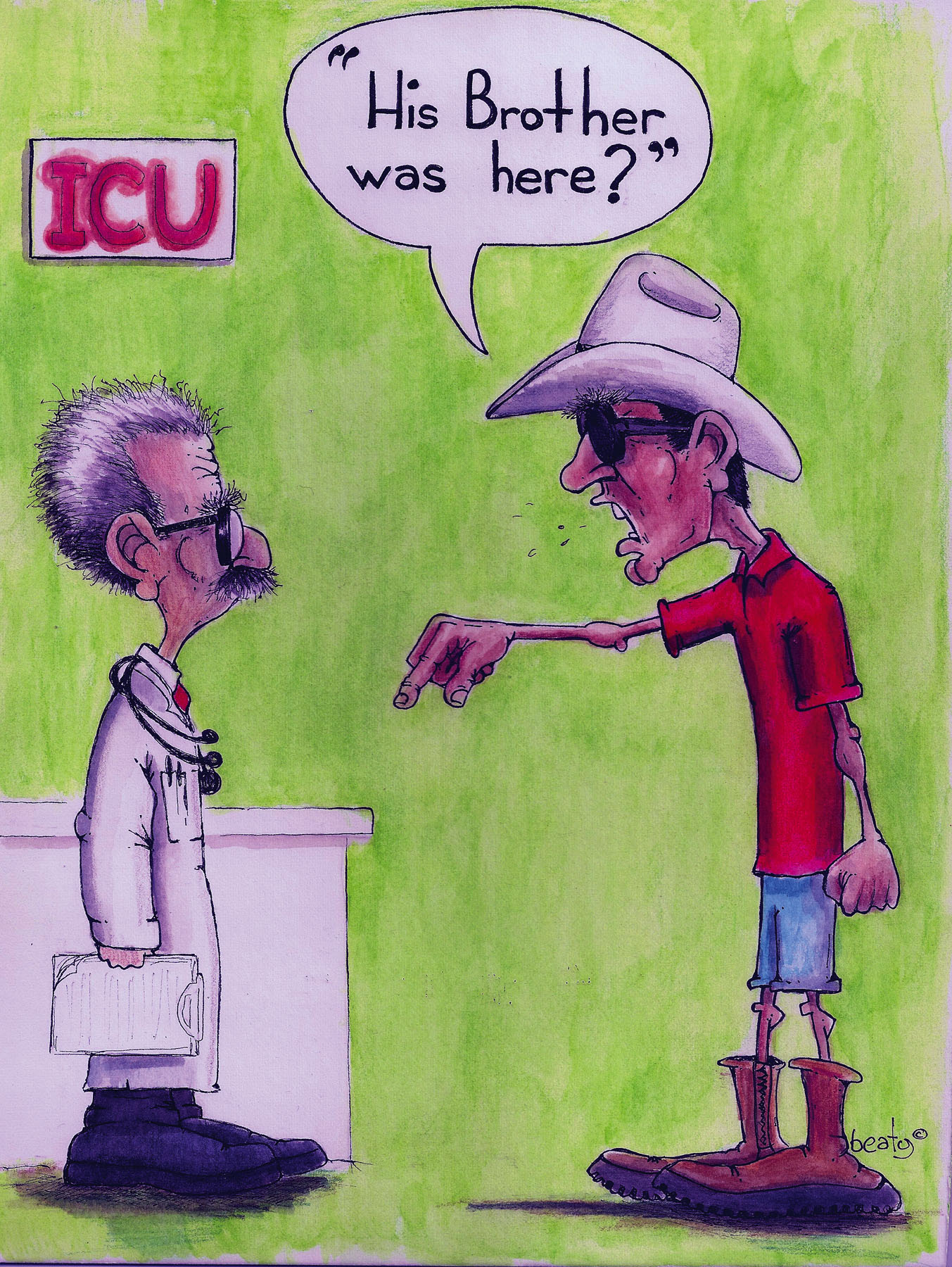 Bodie met Dale at the sheriff's office at daylight the next morning and handed him a cup of coffee he had picked up at a local drive-in on his way into town.

"Thanks, Bodie, I can sure use that," Dale said with a smile.

Conversation was brief and matter of fact as the pair put the miles behind them on the way to Corpus. Neither had much to say and when one spoke it was about the business at hand and nothing else.

It was still early when the pair pulled into the dealership where one Vincent Meyers had purchased a new truck. They introduced themselves and stated their business to the receptionist who called the G.M., and then asked whether Bodie and Dale would help themselves to donuts and coffee while they waited.

"I think I'll just have one of those donuts, and I do need a refill on the coffee," Bodie said. Dale nodded in agreement.

Bodie noticed that the receptionist had taken her cell phone from her purse and made a call, but didn't think anything about it.

In just a few minutes a man in a white linen jacket, Hawaiian shirt, and khaki slacks appeared and introduced himself as P.M. Saunders, the General Manager. "How may I help you gentlemen?" he asked.

Introductions were made and Bodie let Dale do most of the talking, preferring to listen and observe Mr. Saunders as Dale explained what they needed in the way of information.

"The address given by Mr. Meyers for his vehicle title is 5458 Stillbrooke here in Corpus but, his Texas driver's license shows his address as being Route 1 Box 223, Leonard, TX.," he said producing a photocopy.

"What phone number did he give you to call when his plates come in," Bodie asked.

Bodie and Dale made notes of the make and model of the truck Vince had purchased, everything else the GM could provide, and also the cell phone number he had given. They thanked Mr. Saunders and walked back to Dale's car.

"So whattaya say we pay a little visit to 5458 Stillbrooke and see if Mr. Vincent Meyers is home," Dale smirked.

"I'm pretty sure Vince is going to be somewhat unhappy to see me," Bodie replied.

The address led them to a nice home in an affluent subdivision that had a for sale sign in the front yard. Dale and Bodie rang the doorbell and waited but no one answered. Dale's cell phone rang and while he was having a conversation, Bodie walked around the house and peered over the fence.

There was a nice pool that was as clean as a whistle and in fact everything about this house was too neat for the Vince Meyers that Bodie was familiar with. Bodie walked back to the front of the house and noticed that there was no mailbox and he thought that rather odd.

Bodie spied a business card of a local realtor and picked it up. "I think we'll give this lady a call," he said aloud as Dale finished his call.

"They found a finger print on the magazine of the Colt .38 Super that belongs to Tommy, and that print belongs to one Vincent Meyers" Dale said excitedly.

"That should give us enough for a warrant, don't you think?" Bodie asked the deputy.

"Already being worked on as we speak. And by the way, the cell number Vince gave the dealership is a pay-as-you-go phone and not traceable," Dale informed him.

"Realtor left her card on the door and I thought we should give her a call and see if she can give us any information on Vince," Bodie offered, handing it to Dale.

Barbara, the realtor, had never heard of Vincent Meyers and told Bodie that the people selling the house were a local couple who had recently bought a condo out on the island.

"I noticed no mailbox at the house, so I guess the couple who lived here had a PO Box," Bodie wondered aloud.

"Nah, they probably have a group of mailboxes at the end of the street; pretty common these days in subdivisions," Dale answered.

They drove to the other end of Stillbrooke and sure enough found a group of mailboxes, one marked 5458.

"So Vince gave the dealership a bogus address," Dale remarked.

"Not necessarily," Bodie countered quickly. Bodie inserted the blade of his pocket knife in the lock and turned it as one would a key and box opened easily.

"I'm pretty sure that's a felony," Dale said with a smirk.

"I have no idea what you're talking about," Bodie replied and then added, "All Vince has to do is drop by here and open the box with any blade that will turn that lock to get his truck title. Pretty clever for the Vince I know," Bodie informed his fellow lawman.

The wheels in Dale's head began spinning"The title will be mailed to this address but since the plates will not fit the box he'll probably be picking them up dealership. It wouldn't be practical to stake out this mail box, so what say we ask the dealership to inform us a day before they call Vince. We'll be waiting when he comes to get the plates."

"Want to grab some lunch before we hit the road" Dale asked.

"I know a good seafood place if you're in the mood," Bodie replied.

Bodie gave directions and Dale drove. The neighborhood had deteriorated since Bodie's last visit, as had the exterior of the place. Dale made the remark that he was happy to be well-armed.

The food was great and the portions were huge. Dale charged his department credit card and remarked as they made their way to the door, "Okay, you were right about the food. Place ain't much to look at but I haven't had a stuffed crab that good since Mrs. Raby quit making them in Port O'Connor."

"Sure glad you liked it," Bodie replied. "Hey, do we have time to run down to Roy's Bait and Tackle for a few minutes? Vince likes to fish and if he's been around lately maybe they know him. Everybody in Corpus shops there."

The two drove down SPID to Roy's and Bodie struck up a conversation with the clerk at the register. He showed her Vince's driver's license photo but she could not recollect ever seeing him. Rocky wasn't there so Bodie picked up some lures and other things and the pair began their drive back home.

Dale's phone rang about the time they were on top of the Harbor Bridge and from what Bodie could hear the news was not what Dale wanted to hear.

"Word on the warrant," Bodie asked?

"The judge says that the print wasn't bloody, and being as how the pistol had blood all over it and that it belongs to the subject's brother, it could have been made at any time. He will not issue the warrant based only on a clean fingerprint," Dale answered. "As it stands right now we don't have enough to go after Vincent Meyers–other than he's on the shady side; he paid cash for a new pickup shortly after Tommy was beaten and robbed; he gave a phony address to a dealership; and uses a non-traceable cell phone," he sighed.

"Until we hear from the dealership on the plates we don't even know where to find this guy; he's a ghost. All we can do is wait to hear from them, check with the law in Leonard, which is probably the county sheriff's department, and see if we get lucky," Dale surmised aloud, trying to put the facts of the case in order.

"I know that you can't spend a lot of time away from the office, Dale, but Mr. Connor has told me to do whatever I need to do to help find whoever did this to Tommy. Maybe I can spend more time down there, stake out the mailbox, whatever," Bodie offered sincerely.

"The plates will be at the dealership before the title is mailed, Bodie" said Dale. And then he added sternly, "Best thing for us to do is make some calls, ask questions, and wait for the dealership."

"I know that what you're saying is right, Dale; but I just feel so useless right now since we weren't able to just grab hold of Vince in Corpus today," Bodie lamented.

Bodie shook Dale's hand and thanked him when they got back to the sheriff's department. He had planned to head out to the Lazy C to check on things but called Monroe for a report instead and headed to Victoria to see how Tommy was doing.

At the hospital Bodie went straight to ICU and asked for Doctor Hanson. A few minutes passed and Bodie recognized the doctor coming down the hall.

"Mr. Allen, it's good to see you again. I would guess that you're here to check on Mr. Meyers," the doctor greeted him.

"Mr. Meyers is doing much better and the swelling in his brain is almost nonexistent. I would think that he'll be in a private room sometime this week and then we can deal with the damage to his eye and his teeth," the doctor replied confidently.

Bodie nodded and thanked the doctor for the good news.

"Would you like to look in on him," asked the doctor?

Bodie visualized the last time that he had seen Tommy all bundled up with tubes and wires and shuddered. "Will he know that I'm there?" he asked.

"Well then maybe next time, Doc. It's pretty hard for me to see Tommy in that condition," said Bodie, turning toward the elevator.

"Ah, I understand quite well, Mr. Allen. And, in fact, his brother said the exact same thing to me just an hour ago," the doctor added.

Bodie whirled face the doctor, "His BROTHER was here an hour ago?"

"Why yes, he was quite concerned, and told me that he had found out about his brother only this morning," Doctor Hanson assured.