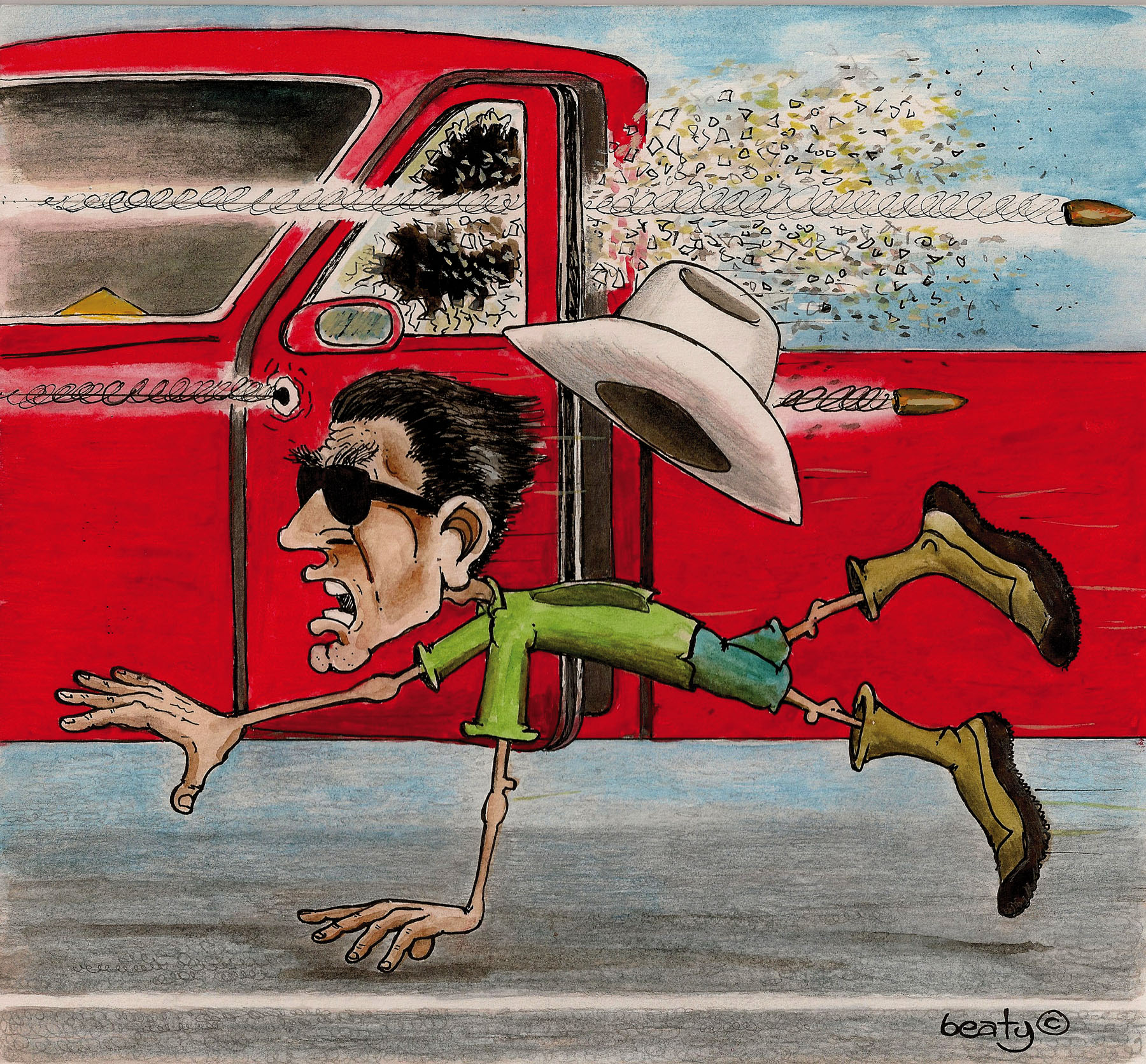 Bodie tried to call Dale but had no signal inside the hospital. He dashed to the stairway rather than squeezing into the elevator with nurses pushing patients in wheelchairs. He sprinted down a hall and through the lobby, never stopped until he was outside. With full signal he called Dale and told him what he had just learned.

"The only way Vince would know that Tommy was even in a hospital is if someone told him, and I think I know who that person might be," Bodie reported.

"Remember the receptionist at the dealership? She got on her cell phone as soon as we left her desk and I have a sneaky feeling she was calling Vince."

"Man that's a reach but what are we going to do, go back to Corpus and talk to her?" Dale questioned.

"I'll swing by the office as soon as I get back into town and we'll figure something out," Bodie replied ending the call.

Dale went into the sheriff's office and related Bodie's news and they agreed it would be a good idea to post a 24 hour deputy guard in surgical scrubs near Tommy's room. If Vince made another visit he could be taken into custody.

Bodie was irritated that Vince had been able to get into Tommy's room but what really confused him was that he didn't bother to hide his identity. On the other hand, he had used his real name and did not hide the fact that he was Tommy's brother. Knowing Vince's shady nature, the only reason Bodie could come up with for Vince even going there would be to finish Tommy off.

Bodie hit the remote on his key chain to unlock the truck and was deep in thought about where Vince might be at that very moment when he dropped his keys. Bending down to pick them up glass showered him as the driver's side window exploded. He heard the shot as he dove to the ground and three more followed as he rolled under the truck and scrambled to squat behind the passenger front wheel.

Peering at the passenger door he saw three holes in a tight cluster. A sharp looking sports car in the next space had three holes punched through the driver's door. "Well if Vince is trying to shoot me he sure brought a big enough gun," Bodie muttered aloud.

People were running into the parking lot and Bodie saw a police officer angling toward him. "I don't know where the shooter is but you might want to take cover," Bodie yelled. "You other folks need to take cover too!"

The policeman's eyes went wide and he quickly dropped to a crouch and vanished behind a white van that had Flores Catering painted on the side. Bodie saw the officer peeking at him from around the back bumper and flashed his deputy badge. The officer nodded and told Bodie that backup had been called. That was when Bodie realized that bending down to retrieve his keys had saved his life.

Sirens blared as five marked cars skidded into the parking lot, circling the area Bodie and the officer were pinned in. Bodie risked a quick look over the hood of his truck. Seeing the situation, the arriving officers crouched likewise behind their cars.

"Is the shooter still on the scene?" one policeman shouted to him.

"If I knew the shooter was gone I wouldn't be hiding behind my dang truck," Bodie called back, irritated.

Bodie scanned the far end of the parking lot to several rows of trees but didn't see anyone and figured the shooter was gone, probably left right after firing the last shot. Swallowing hard he stood up, much to the relief of his aching legs, and then walked around his truck to retrieve his hat.

The local police had a lot of questions but all Bodie could tell them was exactly what happened; someone had shot at him from a distance, probably from the trees, and had fortunately missed. Two officers were placing police line tape around the scene and Bodie thought that there were going to be some very unhappy people when they found their vehicles part of a locked down crime scene.

Bodie and a Detective Sergeant named J.D. Mansfield walked a straight line from Bodie's truck to the trees at the edge of the parking lot. Bodie counted 228 steps to the first tree and scanned the area for a possible sniper's nest. J.D. whistled and Bodie turned to find him squatting and looking at something on the ground.

"As rapidly as he fired it had to be an automatic, and judging where the empties fell I would guess he used that tree right there for a rest," Bodie observed.

Surveying the layout of the area and the view of his truck it afforded, Bodie admitted that Vince, or whoever the shooter was, had picked a great ambush spot. Just opposite the trees, an on-ramp offered quick getaway access to a busy highway.

"Oh I'm fine. How did you find out so quickly?"

"The PD called to check your credentials and told dispatch what happened. Betty is about to have a stroke worrying about you," Dale replied.

"Well my truck is going to need a little body work and so is a fancy little sports car, but other than that everything is okay," Bodie told his friend.

As Bodie walked back for a better look at his truck he spied a small envelope tucked under the windshield wiper. "Hey J.D., got any spare latex gloves?" he called out.

"No, but I'm wearing a pair. Whattaya need?" came the reply.

Bodie pointed to the envelope and J.D. removed it. Turning it over, they saw Bodie's name.

Sarcastically, Bodie shot back, "Well I sure as hell don't want you to mail it to me."

J.D. slit the envelope carefully from the bottom with his pocket knife and removed a note.

Bodie
I had nothing to do with my brother's condition. I didn't even know he was hurt until you nosed around the dealership where I bought my truck. I have been seeing the receptionist and she let me know that y'all were trying to find me but I didn't know why. I tried calling Tommy but got no answer so I called EMS thinking something bad might have happened. They told me to check the hospital. After a few calls I found out why you are looking for me. We need to talk so call this number at 9:00 tonight and let's try to set things right. I've done a lot of bad things in my day Bodie but I would never hurt Tommy. 361-555-1212Vince

"Bodie, you know this is evidence, right?" J.D. asked.

"Well it sure is, evidence in a case we're working on, and we really need to try and keep the chain of evidence intact. If you know what I mean," Bodie answered.

"Well let's get this copied and cataloged and we'll work it from both ends, but if your case ties into this attempt on your life, I really need to know what's going on, OK?"

Bodie filled J.D. in on the Tommy case and then said, "I'd sure like to get down to the Sheriff's office and go over all of this with them, J.D., so is it okay to take my truck?"

"Sure go ahead, Bodie. We've got the pictures we need, but watch your six!"

Bodie was sweeping glass from his truck seat when a beautiful young lady approached the driver's door of the fancy sports car. With his windows down, so to speak, he could hear her yelling at the officers as he drove away.

Bodie liked J.D., he reminded him of an older version of himself. "I wonder if he likes to fish," he wondered aloud. Bodie decided to ask Dale if he knew the Detective when he got to the office.

Bodie walked into the Sheriff's office and was relieved that Betty wasn't at the dispatch desk. He found Dale in his office, on the phone, but Dale waved him in pointing to a chair. Bodie sat and waited until Dale finished his conversation.

That was Detective Mansfield. He was filling me in on what happened at the hospital and he says you're very lucky to be alive.

"Well if I hadn't dropped my keys I guess I'd have been a goner," Bodie replied. "But I'm still alive and kicking and just want a chance to discuss marksmanship with whoever took those shots at me," Bodie quipped with a wink.

Bodie handed Dale a copy of Vince's letter and waited while he read it.

"Does it occur to you that Vince might have been the shooter and this note was a ploy to get you to stand still?" Dale asked incredulously.

"I've been thinking about that. But even if it was Vince, we still have to find him. And–if it wasn't him–then we're looking for a well-armed man who knows how to use a rifle," Bodie drawled with a serious tone.

"So what do you have in mind?" Dale asked.

"Well, for starters, I'm going to call that number at 9:00 this evening and see what Vince or whoever wrote the note has to say."

"OK–we have three hours. Let's see if I can get the District Judge to sign off allowing us to record the call for evidence. Get some supper, Bodie, and be back here at 8:30. We'll know where we stand by then."