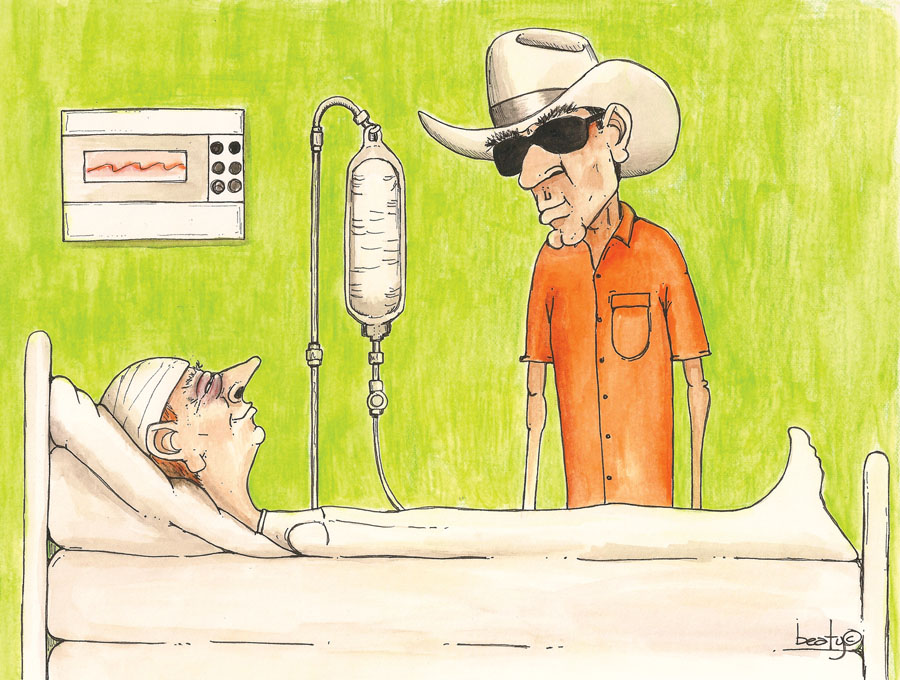 Bodie walked to the Mexican cafe down the street from the sheriff's office and ordered a plate of carne guisada. Waiting for his order and sipping sweet tea his mind was replaying the details of the note Tommy's brother had supposedly placed on his truck. For whatever strange reason he was developing a feeling that Vince was telling the truth.

"Maybe I'm getting soft-headed but, dang if I don't think Vince is being square with me," he muttered half aloud. "But, who was shooting at me in the parking lot?"

"Madre de Dios," cried the waiter carrying Bodie's dinner, "Someone has been shooting at you Senor Bodie?"

"No worries, Amadore," Bodie replied with a wink to hide the seriousness of the matter. "He wasn't a very good shot."

Bodie watched as Amadore walked into the kitchen and could hear him screaming in Spanish to his wife, Maria, as he told her someone had tried to shoot their friend.

Finishing his meal, Bodie left money on the table and hurried back to the office. He wanted to speak to Vince, or whoever it was that would be answering at the number he'd been given.

Bodie was happy to see that no one was manning the dispatch desk as he double-timed to Dale's office.

"We have the warrant to record the conversation for evidence, Bodie, so let's get the recorder set up on the phone in the empty office down the hall," Dale said.

Bodie followed Dale to an empty office and watched as an IT guy named Riley hooked a laptop computer to the phone. When he was done, Riley said, "The recording starts when you pick up the handset and stops when you hang up." And with that he scurried out the door.

Dale laughed and said, "Nah, he's just a little jumpy because I let him know how important this is–everything better work!"

Bodie and Dale watched the clock on the wall as the sweep hand ticked off the final seconds. At precisely 9:00 PM Bodie picked up the receiver and dialed the number from the note on his truck. It rang three times and a voice on the line said, "Bodie, this is Vince Meyers."

"Listen, Bodie, I had nothing to do with hurting Tommy. Nothing at all," Vince said. "I've been working to straighten out my life and I've been doing pretty well so far," he added.

"Where did you get the money to pay cash for the new truck?" Bodie asked.

"I've been working in the Eagle Ford down near the border, Bodie, and I've moved up the ladder pretty fast." Vince replied. "I've got a nice girl friend and things are starting to turn around for me and I sure don't want to mess up all that I've been working so hard to accomplish. And besides, what reason would I have for hurting Tommy in the first place?"

Vince snorted and said that any cash Tommy didn't have in his wallet was kept in a safe hidden in a closet. "And dang, Bodie, he just never got around to giving me the combination."

Bodie's tone turned stone cold and even Dale felt uneasy when Bodie said, "You tied Tommy to a chair and damn near beat him to death. Whipped him with his own damned pistol until he gave you the combination," Bodie said, nearly choking at the memory of how he'd found his friend.

"What? That's what happened to Tommy? Oh hell no, Bodie! I haven't been anywhere near his house or y'all's one-horse town since that fishing tournament years ago." Vince protested.

Silence for several seconds, and then Vince continued, "Look, Bodie, you can't pin this on me because there's a 99.9% chance that I was working when it happened. And if I was, there would be twenty other people on the crew with me," Vince said, fear rising in his voice.

Dale noticed how tightly Bodie was gripping the phone receiver. His knuckles turning white and his jaw clenched, his oversized biceps quivering. "Then you tell me, Vince, tell me how your fingerprints came to be found on Tommy's pistol."

"If you're talking about his old .38 Super, he and I shot it the last time I was there. I reloaded it and gave it back to him when we were through," Vince answered sincerely. "Bodie, you can check with my supervisor. Give him the dates and times or whatever and if I wasn't at work when Tommy was beaten then I was in Corpus with my girlfriend. We go out pretty much all the time I'm not working and I am sure I can produce witnesses to my whereabouts. I tell ya, Bodie, I had nothing to do with this, nothing at all, and Tommy will back me up as soon as he's able to talk," he pleaded.

Bodie was trying to keep his cool but what made him madder than anything was that he believed him. "Vince, who besides you and Tommy knew that he had a wall safe in his bedroom closet?"

"I have no idea, Bodie. Unless Tommy said something, I never told anybody."

Bodie broke the silence, "What's on your mind, Vince? You sure got quiet."

"I know someone who owns a .308, Bodie, but it's one of those military rifles. I also just now thought of someone who knows that Tommy has a safe," Vince said in a weak voice.

Bodie's eyebrows rose and he asked who that might be.

Vince sighed audibly, "Remember the guy who was with me at that fishing tournament? He knows Tommy has a safe because we got into a big pool game at Haddon's after the tournament and Tommy had to get money from it to pay the bet I lost to him."

"What's his name and where can we find him?" Bodie asked.

"I haven't seen him since right after that tournament, Bodie," I swear. "He got into some trouble up in Dallas and they got him for parole violations and sent him back to prison, his name is Raymond Woodford."

Vince started telling Bodie about his old running buddy. Raymond Woodford had been a Ranger, who after being discharged dishonorably from the Army, had hired out to foreign governments as a combat sniper. Apparently Raymond was very good at what he did.

Bodie filled Vince in on the shooting incident in the hospital parking lot and asked if Vince might know why Raymond would shoot at him.

"I guess he figured you would blame me for robbing Tommy. And since you didn't know his name or anything about him that would be the end of it. And, if you were dead, who would ever think about or connect him?" Vince offered.

"We need to get together and talk more," Bodie said. "I think we have a lot more to talk about and, besides, I want to be looking you in the eye when we talk," Bodie added.

"Am I wanted for anything right now, Bodie? Give it to me straight."

Bodie looked at Dale who nodded no, so Bodie replied, "Not by us you're not."

Bodie gave Vince his cell phone number and told him to call when he got back to Corpus. Vince agreed and they ended the call.

Dale called for Riley. He came into the office and unhooked everything, then as he started to leave, Dale told him to put the conversation on a flash drive and an external drive and lock them both in the safe.

Bodie looked at Dale and asked, "Well, what do you think?"

Dale too believed Vince was on the up and up and that they needed to find this Raymond Woodford character.

"Do you think a meeting with Vince is going to help," Dale asked.

"He'll be thinking of nothing but what we talked about for seven days. I'm betting the more he thinks the more he'll remember," Bodie replied.

Dale's cell phone rang and as he was talking Bodie was thinking about this Raymond Woodford, trying to remember his facial features but it had been a while. He did remember though, the guy was in good shape and he didn't talk much. "An ex-Army Ranger, ex-con and ex-sniper, now ain't that a kick in the butt," Bodie thought to himself.

"That was the guard at Tommy's hospital room. Tommy is awake and asking for you," Dale said excitedly.

"Lights and sirens?" Bodie joked as he slid his tall frame into Dale's car.

"Dang it, Dale, don't kill us on the way to the hospital," Bodie said noticing the speedometer registering ninety-five. "There are always deer on this road, you know."

Neither Dale nor Bodie had much to say during the quick ride to the hospital. The red and blue lights flashing through the grill of Dale's unmarked car combined into an eerie light that ghosted on fence posts and electric poles they passed. Bodie was excited to see Tommy and get straight from him who had robbed and beaten him.

Dale parked the car near the emergency room entrance and flashing their badges got them after-hours access to the second floor. There was a nurse checking vitals and messing with some tubes when they peeked in the door. Deputy Knox was in a chair nearby.

"He was asking for you, Mr. Allen," the Deputy said.

Bodie nodded and thanked him. As soon as the nurse appeared in the doorway Bodie tried to enter but she placed a hand in his chest, stopping him.

"Mr. Meyers has a long recovery ahead of him and I don't want him to get excited or upset so you two fellows take it easy and make it short," the nurse commanded.

"Bodie; Oh Gee, Bodie! I was just asking about you buddy," Tommy whispered through swollen lips.

"I'm here now buddy and I haven't been far away this whole time," Bodie beamed.

Tommy reached with his right hand and Bodie took it.

"If I look as bad as I hurt, I must look really bad," Tommy squeaked.

"You look like you got run over by one of Mr. Connor's big bulls," Bodie said to his best friend.

Tommy pulled Bodie closer. "Not a bull, Bodie. It was Raymond Woodford."

"We know, Tommy. Vince told us he would be the only one to know you had money in a safe, and the only one who would harm you to get it. Vince is helping us, sort of, and he's been here to see you."

"Vince came to see me and is helping you... Really?"

"Yes, really. He's trying to straighten out his life, Tommy. At least that's what he says."

At that Tommy closed his eyes and fell asleep. But dang if he didn't seem to have gotten some color back, and Bodie could swear he was trying to smile as he drifted off.