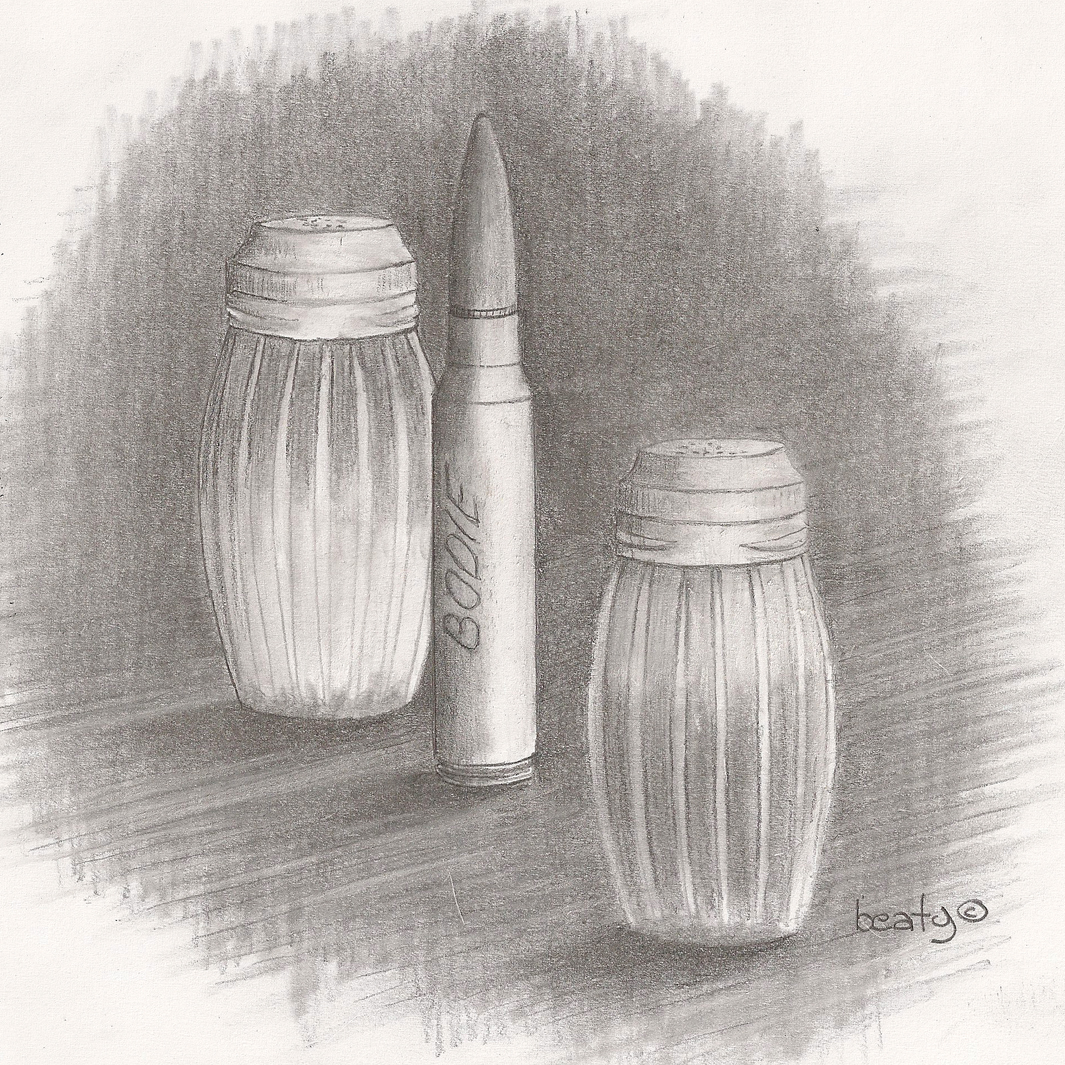 After Dale and Bodie got back from seeing Tommy in the hospital Dale immediately went to work on a warrant for one Raymond Woodford, and he piled on the charges. "I'm going to the County Attorney first thing in the morning. We'll get the warrant details in order and see Judge Tiller," Dale said.

"Well, I need to go by the ranch and see Monroe about a few things. In the morning I have to see Mr. Connor about moving some cattle to a pasture we set aside last year," Bodie replied. "Then I'd like to go by and visit Tommy for a while. Maybe take him a milk shake from the Dairy Princess or something."

Bodie left Monroe and the ranch late that evening and thought how lucky he was to have a man like Monroe to take up his slack when needed. He made a mental note to talk to Mr. Connor about increasing Monroe's pay; he was worth it and that was for sure and certain.

Bodie was tired but also pretty wired. He decided to drop by Haddon's and see who was there. Grab a beer and something to eat, if Eloisa was still cooking.

There was a good crowd of fifteen or so when he walked into his favorite haunt and saw Captain Red perched on his usual stool, holding court as always. Red saw Bodie, held two fingers up to Eloisa, and pointed to an empty table.

"Any word on Tommy?" Red asked, sliding into a chair.

Bodie told him of going to the hospital and getting to speak with Tommy for a while, and also of learning who had beaten and robbed him.

"I remember that weasel from the tournament when he was with Tommy's brother," Red said.

"Yeah, but there are things about the man you don't know," Bodie scowled.

Eloisa came with two beers and Bodie ordered a chicken-fried steak. As she walked away he began telling Red everything he'd learned.

"So this guy was in the Army, a Ranger sniper, got kicked out of the Army for God knows what, and then became a soldier of fortune?" Red was incredulous.

"That's what I know, Red. Now the only thing I want to know is where Raymond Woodford is at the moment," Bodie replied.

Red expressed doubt that Woodford was still around their parts, after having shot at Bodie and missed. But then you never know about those guys.

"To be honest, Bodie, I cannot even remember what the guy looked like, except that he seemed to be in pretty good shape and very quiet."

"He did what I suppose he always did to stay alive when he was in a combat. Quiet, almost invisible, just another person in the crowd," Bodie replied. "In fact, Red, if it hadn't been that he was with Vince we'd have never paid him any mind at all."

Red nodded agreement and their talk turned to fishing and how long before Tommy might come home.

"Me, and the VFD and the Ladies Auxiliary, we have his house all cleaned up. And when we know he's coming home we're going to stock the cabinets and fridge with things that he'll be able to eat," Red offered between sips.

Red filled Bodie in on some nice trout he'd gotten into on the south shoreline and how someone had stolen a bunch of tackle out of a pickup down at the marina.

"Problem for the thieves, they didn't notice warden Wigginton parked on the side of the road watching the boat ramp," Red grinned out the side of his mouth, the way he did when relating a comic tale. "He nailed 'em right there and later found out they'd been stealing rods and reels all the way down to Aransas Pass. They recovered a lot of gear and now they're trying to find out what belongs to who," he said.

Bodie laughed and said that hanging would be too good for them. Red chuckled at that and drained his mug while Bodie stabbed the last bit of steak with his fork.

"Well, I better head to the house," Red said. "Mama said something about going into Houston tomorrow for shopping and a 'go out and spend a bunch of money supper' so I'm going to need my beauty sleep," Red said with a laugh.

"You're not going to get enough sleep to get beautiful, you old reprobate."

Red called back something obscene but thankfully he was already out the door and partway down the steps, toward his modified golf cart. Nobody heard him.

Bodie paid his tab and filled Eloisa in on Tommy's condition. Eloisa said she wanted to name a cheeseburger after Tommy, and did Bodie think he would like that? Bodie allowed that Tommy would be tickled to death. He bid good night and headed to the house.

He took a shower and then switched on an old western that was so good he stayed awake until it was over. "Always did think ol' Tom Selleck was a better cowboy and gun fighter than a detective in Hawaii," he mused.

Bodie tossed and turned. He kept thinking about Raymond Woodford and wondering where the man was. "A combat veteran and a mercenary and not scared to take a shot at someone. A good person to stay the hell away from," Bodie said to himself as he closed his eyes, hoping sleep would come.

Something felt wrong and his sleeping was not restful. Suddenly he was fully alert. He didn't move a muscle, just listened until he was certain that no one was in the room with him and then slowly opened his eyes. His bedroom was dark and nothing seemed amiss but, something wasn't right and he could feel it. Slowly he swung his legs over the side of the bed, grasping the .45 automatic from the nightstand.

He stepped to the side of the bedroom door that opened into a hallway that led to the front of his home. Kneeling and tilting his head he could see with one eye the hallway floor that was partially lit from a nightlight that he kept on. Still, he knelt motionless and listened. He slowed his breathing as his heart stopped pounding in his chest. After three or four minutes he stood slowly and moved carefully into the hallway.

Bare feet and BVDs, Bodie moved silently down the hall toward the den and using his thumb and index finger so no noise would be made, he moved the thumb safety on the big Colt from Safe to Fire. He took note that the doors to other rooms along the hallway were closed as they usually were. Then he stopped about three yards from where the hall opened into the den and paused again to listen.

Bodie heard nothing but sensed someone was outside or possibly already in the house. He moved to the opening of the den and stopped again, listening, anything, that might give an intruder away. The only sound was the ticking of the grandfather clock across the room. He could see the front door was shut and the dead bolt was locked. He could make out that the back door on the far side of the kitchen was closed as well but the angle was wrong to see the lock. The only light in the kitchen was from the digital clock on the microwave and the fancy coffee pot that he had gotten for Christmas a few years earlier. They cast an eerie blue-green light in the dark room.

Bodie began to move slowly and silently back to his bedroom keeping his eyes on the end of the hallway the entire way. He took his cell phone from the nightstand and dialed 911 then put it under his pillow and slowly retraced his steps back to the den.

Bodie knelt and with his pistol at the ready he peeked into the den. The constant tick-tock of the clock was driving him nuts as he scanned the room.

No one was there, no boogieman hiding by the bookcase or sitting in his recliner. Bodie stood and as quietly as possible and inched toward the kitchen doorway. "The hell with it," he finally muttered and slid along the wall and into the kitchen. The big Colt ready but no one was there. He felt foolish and looking at the clock saw it was only 1:00 AM.

Bodie laid the pistol on the kitchen table, moved to a cabinet and removed a bottle of twelve year old George Dickel. Taking a glass from the dish drain he poured a couple fingers of the smooth whisky. Savoring the flavor as the liquid warmed his throat, Bodie dropped the glass and jumped backwards when the back door exploded and a man in camouflage stood pointing a large caliber rifle right at him!

"You forgot to check the back door, Cowboy," Raymond Woodford said.

Bodie looked at his pistol lying less than two feet away on the table.

"Forget it, Cowboy. You're not that fast, you'll be dead before you can reach for it. As a matter of fact, you're already dead."

He bolted upright in the bed, grabbing at his chest with one hand and for his pistol with the other. Flying out of bed he hugged a wall, struggling for breath. He was dizzy and nauseated but managed to get a grip as he sank back to the edge of the bed.

"A dream, a dang nightmare. That's all it is," he said aloud. "Good Lord Almighty Whew... Where did that come from?"

Bodie moved into his bathroom and splashed water on his face, then used a towel to dry his face and also the sweat beading on his entire body. Picking the pistol up from the lavatory he moved down the hall, scanned the den and checked the dead bolt on the front door again before moving into the kitchen. He looked at the dead bolt on the back door and took note that it was still locked. It was 5:30 and no way he was going back to bed for thirty minutes. He spooned coffee into the basket and started a pot brewing.

Sitting to enjoy a cup he noticed his hands still trembling from the nightmare. He put the mug he'd been clasping unconsciously with both hands on the table in front of him and that's when he noticed the object between the salt and pepper shakers.

A loaded 7.62x51 military round... with his name scratched on the brass case.