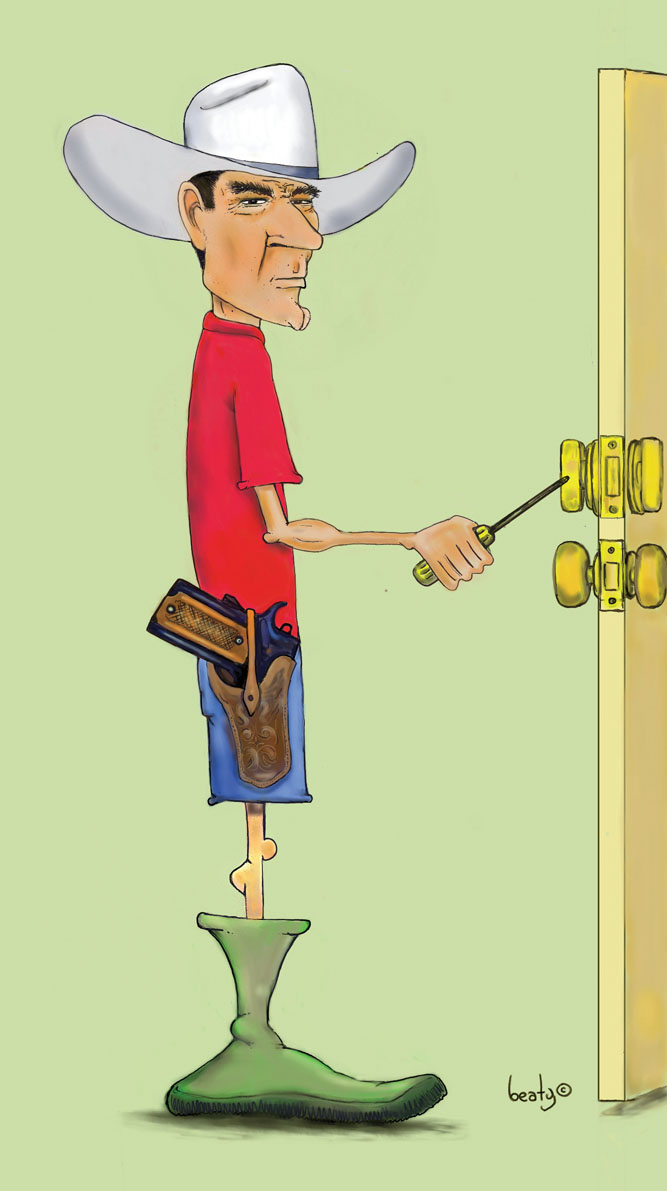 Bodie was unnerved, and madder than he'd ever been. Having had his home invaded, especially by the likes of Raymond Woodford. If in fact it was he who left the rifle cartridge with his name on it. But then again some of Bodie's friends were noted pranksters, and a couple of them knew where he hid the spare key.

Thinking of that, Bodie walked outside, pistol in hand, and around the side of the house. Looking at the piece of river rock he'd brought from Utopia years before he noticed a footprint in the flowerbed, left by a boot with a lugged sole. Combat boots have soles like that, he thought, and he also noticed the rock slightly out of place. The spare key was under the rock alright, but facing the wrong direction.

"Okay, so if Woodford did this, I'd say he's sloppy," Bodie muttered. But, he wanted me to know that he'd been in my house, leaving that cartridge and all. So what difference would it make how he placed the rock or the key?

Bodie went back inside and opened the folder Dale had sent him, photos and more information about Raymond Woodford than he cared to know. His military history was there and other bits and pieces about his post-military occupations and, of course, his arrest and prison records. From what Bodie could gather Woodford didn't like to be told what to do and, he preferred to operate solo. "No wonder he had problems with the Army," Bodie thought.

Bodie read carefully and what interested him most were the reports of Woodford's life after the army. Bodie was familiar with the names of some of the countries the government knew he had worked in and others he would have to look up. In any case, from what he read, Mr. Woodford was very good at what these governments and groups hired him to do.

Bodie called Red to see where he was and, learning he was at the hardware, asked him to buy two high-dollar dead bolts. Bodie wanted to replace the ones on his doors just to be safe, but he'd leave the old key just where it is for now. Red said he'd be happy to oblige but the locksets wouldn't be free. Bodie quipped back that he was good for it.

Bodie then phoned Dale and related the recent events.

"Maybe you should be staying somewhere else, Bodie."

"Nah, Dale. I'm wondering though, why he's bothering me, knowing that we're onto him," Bodie replied.

"I've no idea, Bodie, but I shouldn't need to tell you that you need to watch your 6. And, if I were you, I'd have something more powerful than a handgun with me...if you know what I mean," Dale added.

Bodie assured Dale that he understood and that he'd already put a deer rifle in his truck just that morning.

"I'm going to call Vince this evening and set up a meeting," Bodie informed the deputy. "He should be off starting tomorrow and I want to sit down and talk with him."

"I have to be in court but if you want to hold off a day or two I can ride along," Dale said.

"Nah, don't worry about it. I just want to visit with Vince and see if I can pick his brain on his old buddy, Woodford."

Dale told Bodie he'd learned the FBI was inquiring about the interest the sheriff's office had in Raymond Woodford. Then went on to say the Feds also seemed interested in things that had happened in other places around the world while Woodford was there.

"So is there an agent assigned and coming down, or are they just curious as to what's going on with our investigation?" Bodie asked.

"An agent will probably show up to see what's going on but, as for right now, they have not opened an investigation of their own and they're not part of ours," Dale stated flatly.

Bodie called the number Vince had given him and it answered on the second ring. "Bodie, is that you?" Vince asked.

"Sure is, Vince, how about we get together for a talk and some lunch tomorrow. Maybe you can help me figure a way to find Raymond Woodford."

"I'm on my way back to Corpus right now, Bodie, so any time tomorrow is OK with me. I know a place that has good food, cold beer, and out of the way. We won't be disturbed there."

"Sounds good. Give me an address and I'll be there around 11:30," Bodie replied.

Red stopped by Bodie's and delivered the locks. "Here's the receipt, Bodie, they were pretty high. Didn't know if you'd believe me if I just told you the price."

"Hell, I'd have believed you, Red. I knew these locks were expensive, but they're also bump proof." He then informed Red about the cartridge on the kitchen table and the key being moved; the reason for new locks.

"Well give me a screwdriver and I'll get the back door while you do the front. Any beer in the fridge?"

"Should be plenty…unless Woodford drank 'em all up," Bodie joked.

Bodie and Red made short work of installing the locks and Bodie gave him the spare key to each. "Don't think I'll be hiding a key anymore, not with this character nosing around."

Placing the keys in his billfold, the concern on Red's face told Bodie that he agreed.

"Normally is, Bodie, but Mr. Haddon decided it might draw more locals on slow nights so we're going to try it for a couple weeks."

Bodie looked around the place and was glad to find a stool at the bar. "I'd say it's working, Eloisa. Go 'head and bring me the special, please. Extra tartar sauce."

"Thank you, but I'll just have tea tonight," he replied.

Everyone in the place that knew Bodie came to ask how Tommy was doing and each in turn told him what they were planning to do for him went he got out of the hospital.

Ol' Boggs Ford said that he'd replaced the belts on Tommy's boat lift and greased the cables and pulleys. "I did it to be nice, Bodie, and also because I'm tired of being awakened when Tommy decides to put the boat in the water before daylight or during my afternoon nap. Those darned pulleys screeching will raise the dead!"

"Tommy will appreciate it, Boggs. I guarantee he will," Bodie said.

After dinner Bodie visited with a few folks before heading home. He drove down the long driveway to his house fully alert and paying close attention to what was going on around him, which as far as he could tell was nothing. Instead of parking where he usually did, Bodie parked where should someone take a shot at him, the truck would be between him and his back door.  Slipping the .45 from its holster Bodie got out of the truck and stepped quickly to the door and unlocked it.

As soon as he got inside he stopped to listen, but all seemed normal. I need to get a big old pot licking dog and keep him around here. He'd let me know if someone was about the place, he said to himself. Entering and checking the front door deadbolt, he hit the shower.

Bodie had just settled into his recliner when Monroe's number flashed on his cell phone.

"Boss, the A/C went out in my house so I'm going to stay in the office at the barn tonight, if it's alright."

"Well I hate that you have to do that Monroe but give Brian a call in the morning and have him come out and either fix or replace the unit for you," Bodie said. "I know that I've been scarce around there lately but I'll make it up as soon as we get everything squared away. Which I hope is real soon."

"I sure appreciate it, Boss. It was getting plumb hot in the house but this bed in the office is comfortable and the A/C keeps it cold enough to hang meat."

"I have to run to Corpus in the morning, Monroe, but as always if you need me for anything just call. OK?"

Morning came early and Bodie headed out to Mr. Connor's ranch to check on things before he headed for Corpus. Monroe was there and they went over some business. A new bull was going to be delivered and Bodie wanted him to have a two acre pen to himself for a while.

As he prepared to leave Bodie turned to Monroe and said, "I'm going down to the rifle range and check the zero on my rifle."

"Are you planning to go hunting?" Monroe asked.

"Yeah…sort of," Bodie replied, and left it at that.

Bodie drove over to the range and to the 100 yard backstop. He scribbled a bull's-eye on a paper plate and stapled it to the plywood nailed between cedar posts.

Going to the shooting bench, Bodie rolled a jacket for a rest and placed it under the forearm of the old pre-Garcia Sako. The rifle was old but well maintained. The finish showed years of use and the bluing was thin in places. The barrel had to be replaced about ten years ago, but this was the most accurate rifle he had ever owned—or had ever fired for that matter.

Taking a plastic cartridge box from the center console of his truck he scanned the load data on the label. "Seems a waste of time for me to even write that down anymore. I've been loading the same exact round for thirty-five years and it's not like I'm going to forget," he chuckled.

Bodie loaded three rounds into the old .270 and snuggled into the stock. He cycled the bolt and was aligning the crosshairs on the target when he remembered his ear plugs. He put the rifle's safety on and reached into his pocket for his hearing protection. Once he had them in his ears he snuggled back down into the rifle.

Bodie cranked the scope to 6-power and set the cross hairs directly on the bull's-eye, let out a breath and began a careful trigger squeeze. The rifle went off with about three pounds of pull on the tuned trigger and after settling from the recoil he could see the shot about one inch above dead center. "Danged old 130 grain Noslers are just pure poison," he whispered.

Smiling, Bodie cycled the bolt and sent another round downrange. And then the third. Studying through the Leupold glass he could clearly see one elongated hole. Wiping the rifle with a silicone rag he slid it back into its case and gathered his gear. If he left for Corpus now he'd be early…and he liked being early.

The drive was uneventful and pulling into the parking lot of El Cabrito Loco, Bodie realized that when Vince said a place was out of the way he wasn't joking. "El Cabrito Loco…the crazy kid, huh? Well let's go see if they know how to cook a baby goat."

Hearing the crunch of gravel, Bodie turned to see Vince Meyers rolling up in his new pickup. First time he'd seen him in quite a while.

"It's good to see you again, Bodie," Vince said sincerely, extending his hand.

"You too, Vince, it's been a while. Maybe with your help we can get the guy who beat and robbed Tommy."

Still clasping the work-toughened hand of the cowboy fisherman, Vince looked him square in the eye, "That's why I'm here Bodie…"