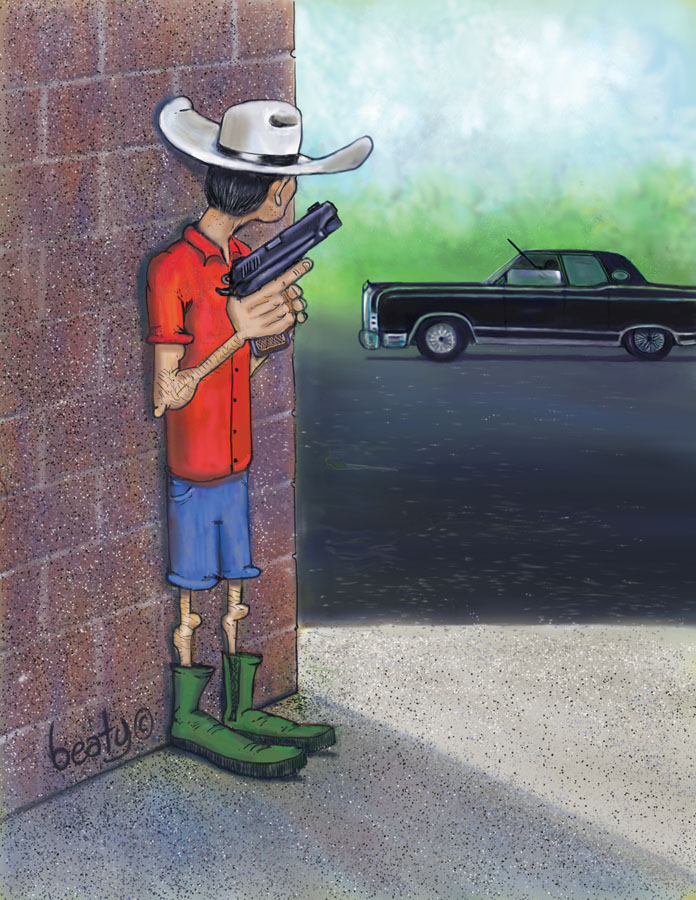 Bodie and Vince climbed the stairs into the cavernous restaurant and it occurred to Bodie that either they had huge crowds or the owners were extreme positive thinkers.

"My goodness, this place is enormous," he quipped.

"They do a good lunch crowd, Bodie, we're a bit early. At supper time they'll be lined up out the door waiting for a table," Vince replied.

A pretty Mexican girl showed them to a table and took their drink order while Bodie looked over the menu.

"They actually have cabrito here?" Bodie asked in disbelief.

"Best you'll find this side of the Rio Grande. And their tamales are homemade, right here," Vince answered with pride.

A waitress came to take their orders and people were starting to come in, lunch crowd early birds.

"Yes ma'am. I'd like the cabrito plate with rice, refried beans, pico de gallo and tortillas. I'd also like to try a couple of your pork tamales, please," Bodie said to the waitress.

"Uh... that's a lot of food, Bodie. They really pile on the cabrito," Vince cautioned.

"Well, what I can't eat here I'll eat later at home," Bodie grinned back to him.

Bodie and Vince shot the breeze about Vince's job, his girlfriend and Tommy. Rather abruptly, Bodie looked him dead in the eye and said, "Tell me everything you know about Raymond Woodford."

Vince related all he could about the man and finished up saying he had no idea why he'd be bothering Bodie–except maybe that since he had missed him in the hospital parking lot he had to make up for his mistake.

"He's strange like that, Bodie, and he's just a dangerous individual who I am very sorry I ever took up with in the first place," Vince frowned into his tea glass. Shamefully unable to face Bodie, he continued, "And God knows that for Tommy's sake, I wish I'd never brought him down and I sure as hell wish I'd never let on that Tommy had inherited all that money." Vince was very sincere, almost to tears.

Lunch came and Bodie's eyes widened at the heaped platters. No doubt it was more food than he could ever eat in one sitting. They ate quietly, mentioning only the huge portions and how good it was.

Sensing Vince's mood, Bodie finally spoke. "I'm telling ya, Vince, this is some of the best Mexican food I've ever eaten."

Munching a taco and staring away, Vince only nodded.

"I'll darn sure make it a point to come back here, I can tell you that much," Bodie said between forkfuls of the tender meat.

Tension eased as the pair reached their fill and Bodie commented, "I may have to get a room after that meal."

"I know what you mean," Vince replied.

Bodie asked the waitress to bring him a to-go box and as he watched her walk towards the kitchen he noticed a man at the register speaking in an urgent but hushed tone, waving wildly.

Bodie walked toward the anxious man still babbling Spanish to the cashier. "Whoa there amigo–what's the problem?" he asked, flashing his badge.

The lady running the register replied in English that her friend had just seen a man in the parking lot with a rifle pointed from a car window. Bodie turned to the man and in perfect Spanish repeated what the lady had said to him.

"Gracias amigo," Bodie said as he turned to the girl at the register. "Would you mind calling the sheriff's office and tell them what this man said, please," Bodie asked.

"Yes, of course, right away.

Bodie walked back to the table and filled Vince in on what was going on.

"Well we sure can't go out the front door if it's Raymond out there. We'll be sitting ducks!" Vince said with fright.

"No, but you can stay right here while I got out the back and see if I can get to my truck without being seen or shot," Bodie replied.

Vince was in mid-sentence as Bodie entered the kitchen and asked the pretty girl who seated them if he could get outside through the kitchen. She told him he could and pointed the way.

Bodie reached the door without drawing so much as a second look from the kitchen crew. He opened it slowly guessing the black car might have moved round back. Seeing nothing he walked down the steps and hugging the wall made his way to the northeast corner. Peeking around the building, the car was there as the man had told him–black Lincoln with dark tinted windows and what looked like a rifle barrel out the driver's window. No way could he make it to the Lincoln without being seen, it was in a perfect spot to cover the front door.

Bodie tucked his .45 back into the waistband of his jeans and made his way back through the kitchen to advise Vince of the situation.

"I guess we're going to have to. I don't want to be out there with a pistol in my hand when they pull up, and be mistaken for a bad guy," Bodie said.

Within a few minutes three sheriff's cars pulled into the big parking lot and sealed off the black Lincoln. A loudspeaker crackled as a deputy instructed the driver to exit the vehicle, place the rifle on the ground, and then to step away from it.

Four deputies were aiming black rifles at the car and in a moment the driver's door opened and a man stepped out, tossing a rifle to the ground. He stepped back and away following orders and was soon lying face down in handcuffs.

Bodie stepped out the front door and whistled to the nearest deputy, flashing his badge. The deputy waved him in and he handed over his badge and ID. The deputy studied it briefly and handed it back.

"Can I be of some assistance, Deputy Allen?" he asked.

"I'd be mighty interested in talking with the man y'all just took down," Bodie replied. "Been looking for a man of his description for some time now."

The deputy motioned for Bodie to follow and they walked toward the face-down suspect.

Bodie glanced at the rifle being held by another deputy.

"What the–that's a damn pellet gun!" Bodie exclaimed in confusion.

The deputies lifted the man from the ground and while his height was right, his build and face bore no resemblance to Raymond Woodford. Bodie was dumbfounded.

"I'm telling you, I just wanted to scare the bastard!" the man began shouting. "My wife's having an affair and I know they've been meeting here for lunch. I only wanted to scare him–that's all. Honest!"

Bodie looked at the deputy and rolled his eyes. "Nope, not the one I'm after," Bodie said with a frown.

"Too bad Deputy Allen, because if it was we'd sure be happy to give him to you. You sure you don't want him anyway?" the deputy asked.

Bodie chuckled, said no thanks, and made his way back to the restaurant.

"Wasn't him, huh?" Vince asked from the porch.

"Nope, not him Vince. And to be honest, I have enough to do without worrying about this Raymond Woodford character right now," Bodie said. "I would like for you to come and see Tommy and maybe if your job allows you could stay with him a while until he can get around better."

"Well our rig is being moved and I have the rest of the week off so I'll come down tomorrow, that is, unless there's some warrant for me there," Vince asked.

"No warrant, you need to settle that thing up north when you can, but the sheriff spoke with the county attorney up there and he had the warrant for you recalled due to you helping us with this investigation," Bodie told him. "But I wouldn't wait too long to straighten that out, if I were you," Bodie added.

"I appreciate it Bodie for being such good friends with Tommy and for helping me," Vince said.

"Tommy's good people, Vince. I'm pretty sure you'll succeed in getting everything in your life on track," Bodie said with a smile. "Call me tomorrow."