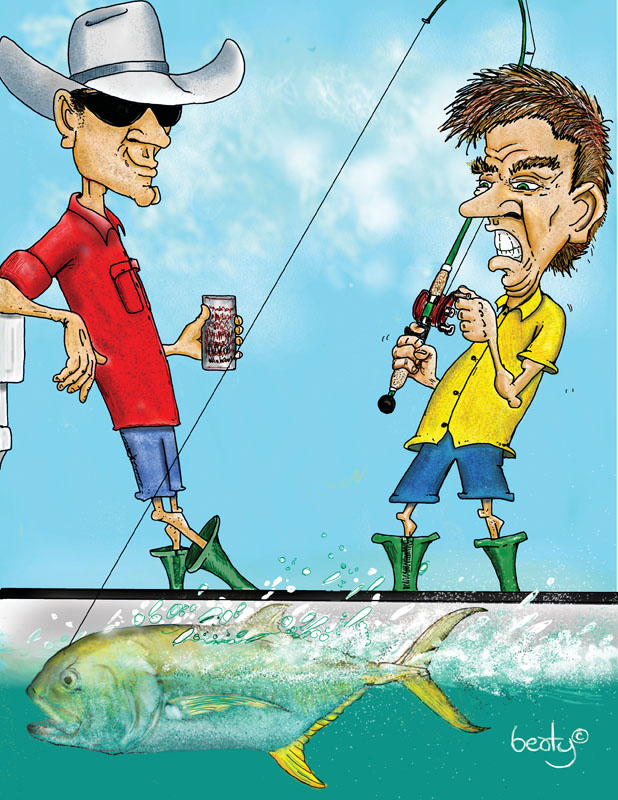 Bodie watched the flock of seagulls hovering and diving in a frenzy. The brown pelicans joined in and Bodie watched them hitting the water between floating gulls, paddling around and feeding hungrily on whatever was being driven to the surface. Bodie eased his boat into position just upwind of the activity and switched off the quiet-idling Yamaha.

From the bow of his Transport SVT Bodie cast a Hogie shrimp tail that was threaded onto one of Dusty's 1/8 ounce screwlock lead heads and felt the thump as soon as the lure hit the water. He set the hook and a nice trout broke the surface shaking its head trying to rid itself of the offending hook. Bodie lifted the fish over the side of the boat, grabbed it, removed the hook and tossed it into the ice chest.

At the back of the boat Tommy Meyers had just released an undersized trout and had cast back toward the feeding birds.

"You gotta let the lure go down through the little fish to catch the big ones," Tommy said, as if Bodie needed the advice.

No sooner had he said that when he set the hook on a fish that decided he wanted to leave the bay for the Gulf of Mexico. With line peeling rapidly from his reel he yelled to Bodie "Crank up and follow this fish or he's going to spool me!"

Bodie looked back at his buddy, noted the speed of the line leaving the reel and told Tommy to tighten the drag. "Thumb down on the spool if you have to, it's a big jackfish, Tommy. You have to either turn him or break him off," Bodie shouted as he added another fat trout to the ice chest. Casting back to the birds he had another one on almost before he could get the line tight.

"I told you to break him off, Tommy," Bodie called to his friend again.

"Well I'm sure trying but I tied my braid directly to the lure and it doesn't want to break," Tommy whined.

Bodie placed his rod in a rod holder and walked to the back of the boat. Taking the rod from Tommy he tightened the drag further and applied thumb pressure to the spool but, the fish just kept pulling line. Not as fast but still very strongly. Try as he might, Bodie couldn't make the line break.

"Well if we can't break him off we might as well try to catch him," Bodie finally admitted.

Bodie handed the rod back to Tommy and told him to go to the bow of the boat. Bodie lowered the trolling motor and began following the direction Tommy's line was going. Chasing after the fish Tommy started gaining line back on his reel and then started the fight again, pumping his trout rod and getting back a little line with each effort. Then the fish would make another run and Bodie would turn on the trolling motor and chase the fish again.

"My arms are getting tired," Tommy cried.

"Hang on and catch your fish, Tommy. He's a bruiser. That's for sure and certain," Bodie offered in encouragement.

For thirty minutes the two friends battled the fish until finally the big jack gave up and the two pulled it from the water. "That's one of the biggest fish I ever caught," Tommy yelled.

Bodie took his Boga Grip and hoisted the big fish into the air. "Looks like 42 pounds give or take, Tommy Boy."

"Why would you keep this fish, Tommy? It's not good to eat. Let it go to fight again someday."

"Well it's your fish," Bodie said and they put the big fish into the big ice chest.

Bodie looked around for birds but they were so far from where they had been catching them that if they were still feeding he couldn't see them. He pulled a pair of binoculars from under the console and started scanning the horizon. "There's another big bunch of birds about a mile over towards the island," he announced. And with that he cranked the big engine and they headed that way.

"Everyone is going to be jealous of this fish Bodie and I bet Red is going to bust a gut when he sees it." Tommy said giddily. "I bet he'll wish he would have come with us today."

"Well, seeing as how he's in a Louisiana casino with his wife, I'm sure he would have liked to been here instead," Bodie said with a grin.

There was a boat fishing the birds but Bodie maneuvered to where they both had plenty of room and he and Tommy started catching trout with their first casts. "These fish are big for school trout," Tommy said.

"I was just thinking the same thing," Bodie replied. "These fish are averaging 19 or 20 inches, but let's not complain about it."

Tommy was putting his final trout into the ice chest when Bodie said, "Why don't we go see if there are any reds around my favorite slough?"

They made the five mile run in good time and Bodie slowed the boat to an idle. Glassing the shoreline at the mouth of the slough he could see bait moving and it looked pretty nervous.

Idling the boat up shallower so they could get out to wade, Tommy was tying on a 1/4 ounce weedless gold spoon. After setting the Power Pole, Bodie grabbed a rod with the same spoon that Tommy had tied on and the two slipped into the warm bay water.

Bodie pointed his rod to where he wanted Tommy to go and he moved down the opposite direction. He couldn't be sure but he either saw the tail of a redfish up on the sand bar to the right of the slough or it was a really big mullet. Casting up towards the grass he started ripping the spoon back when a big red slammed the bait. Bodie set the hook and the fish made a hard right turn just as his line went slack. Reeling in he saw that the small hook had broken where it had been soldered to the spoon.

Bodie reached into his small lure box and upped his ante with a 1/2 ounce version of the same lure. Casting back to the same spot he ripped the larger spoon back towards him with no results. Studying the water Bodie cast the spoon towards some mullet that were milling around. Pulling the spoon back through them a fish nailed the spoon and Bodie set the hook.

"Break the hook on this one," Bodie muttered aloud. Glancing quickly in Tommy's direction he noticed him lifting a nice red from the knee-deep water. Bodie fought the strong fish up to him and with a quick grab he gripped the fish behind the gills and lifted it from the water. "Sure don't have to measure this guy," he chuckled, and added it to his stringer.

Bodie cast parallel to where he was standing and almost as soon as the spoon hit the water he hooked up with another strong red. He looked toward Tommy and saw him wading back to the boat. Bodie added that red to his stringer and then caught one more to finish his limit.

"You get your limit, Tommy Boy?"

"Yeah, but my rod is messed up," Tommy said in a dejected tone.

"Let me have a look," Bodie said as he climbed back into his boat.

"Try turning the reel side to side–it won't stay in position," Tommy replied.

With little effort Bodie could move the reel and the reel seat side to side. "Looks like that big jackfish broke the epoxy that holds the reel seat to the rod blank."

"That's my favorite rod, Bodie," Tommy whined. "With my luck it probably cannot be repaired."