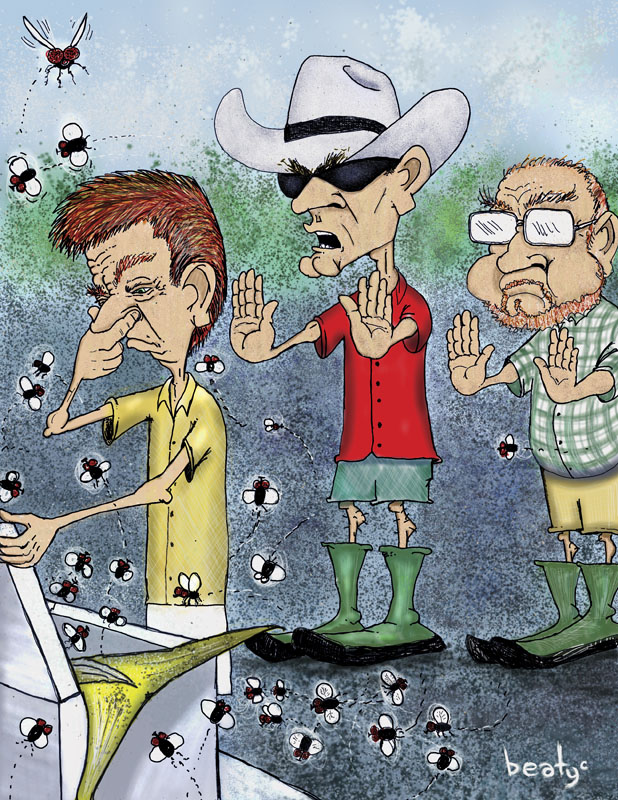 Tommy was still fussing about his broken rod while he and Bodie cleaned fish and washed the boat.

"Tommy Boy," Bodie said, "You can always get another rod, it's not all that big a deal."

"Well not like this one, Bodie," Tommy lamented. "You remember old Skinny Johnson? He made this rod personally for me, it's custom stuff, and Skinny's been dead for years."

"Yessir, I remember Skinny, and he made a decent rod. But there are better rods being made these days," Bodie assured him. "But if you're set on that particular one, why don't you take it by Old Man Jackson's place and see if he can fix it for you?"

"Hey, that's a good idea, Bodie. I'll bet that if anybody could fix it–Old Man Jackson could!"

Bodie placed Tommy's big jack in a spare cooler and dumped what was left of their ice over it as the pair proceeded to head off in their own directions. Bodie to the ranch and Tommy to Old Man Jackson's shop.

Bodie drove up to the barn and saw that Monroe had the crew loading cedar posts onto a trailer to go to work on a new cross-fence they had been planning.

"We should have that fence knocked out by day after tomorrow," Monroe told his boss.

"That'll work, Monroe. And I'm guessing you have enough posts and wire?"

"We have plenty of everything, no worries there," Monroe replied.

"I have some paperwork, Monroe, so I'll be here in the office for a spell. Call if you need anything hauled out there."

Bodie sat at the old wooden desk that had once been in some Army office. Mr. Connor had purchased a lot of surplus furniture from the government when they were closing bases after the war.

He started stapling invoices with corresponding orders to be sent to the ranch accountant for payment. His thoughts wandered to Tommy's broken rod and doubted whether Old Man Jackson could repair it. With that thought he made a call to a hobby rod-builder friend that owed him a couple favors. They discussed a new rod what blank and action to use, along with the guides and style of handle he thought would best suit Tommy. Bodie's friend agreed to take the project and said he could build it within a few days.

"I sure do appreciate it, Tim. Call me when it's ready and I'll drive into town and pick it up," Bodie told the rod-maker.

Tommy walked into Old Man Jackson's shop carrying his damaged rod and gave him the full story about how strong the fish was that he had whipped, damaging his favorite rod during the fight.

Old Man Jackson looked it over carefully and shook his head. "I could replace the reel seat and handle, Tommy. But look here, the blank is cracked and I can't fix that."

Tommy thanked him for his trouble and walked sadly to his truck. He drove to Haddon's to have a beer and grab some lunch and, of course, to share his sorrows with Eloisa.

"It was the biggest fish I have ever caught," Tommy told her. "But it ruined my favorite rod and it can't be fixed."

Eloisa bought Tommy a beer and turned in his order for a chicken-fried steak and fries.

Tommy looked up at Bodie's big trout hanging over the bar and it reminded him of his plan. "Hey Eloisa, I'm gonna have that big old jackfish mounted. Will you hang it over the bar when I get it done?"

"I'll put it on the wall by the pool tables, Tommy. More people will see it that way," she answered rather skeptically.

Haddon's was pretty slow with just a few regulars and a couple of out-of-towners sporting flowery shirts, ugly shorts, white legs and flip-flops with socks.

"Tourists!" Tommy muttered to himself.

Finishing his lunch, Tommy headed to the house to put his fishing gear away and then decided a good nap was in order.

Bodie wrapped up his ranch business and headed into town to grab some lunch.

"You just missed Tommy–crying about a broken fishing rod," Eloisa greeted. "Said he was going to have a big jackfish mounted and wanted to hang it over the bar–I told him I'd hang it over by the pool tables," she added with raised brows.

Bodie ordered a cheeseburger with bacon and jalapenos and an order of fries. "Yeah, he's pretty torn up about that old rod and he can well afford to buy any custom rod he wants–but Tommy's nostalgic about his old gear," he chuckled.

Bodie was munching his cheeseburger when Monroe phoned to say he was going to need more fence staples. "I thought you said you had everything you needed," Bodie joked back.

"Well, Boss, I thought so too. But we're going to run short."

Bodie drove out to the ranch and picked up two boxes of staples and then drove to the pasture where the crew was working.

The crew had made more progress than Bodie would have thought possible and were almost finished setting the corner posts for the gate and ends. With the post holes already in place they would be finished in little more than a day.

Tommy awoke from his nap and set about tearing down his reel for cleaning. He stripped the line and added new braid, then started puttering around the house. He decided to vacuum the carpet in the den but the vacuum cleaner wouldn't work. He tried different plugs thinking maybe a breaker was out and it was the same with all of them. He was going to have to have it repaired or buy a new one.

Tommy drove into town and went to a local vacuum cleaner shop where he liked doing business and the owner took a look at his old unit.

"Looks like the motor's burned up, Tommy. I have a sale going on if you would like to buy a new one," the man announced hopefully.

Tommy looked at all the new machines with sale tags and couldn't decide. "Just pick one out you think will work for me and I'll take it," he told the shopkeeper.

Making small talk as he rung up the sale, the clerk remarked that it was the hottest day of the year and already over 100 degrees outside. Tommy agreed that it was mighty hot, thanked the man, carried the vacuum to his truck and headed home.

Opening the carton on the living room floor, Tommy thumbed through the owner's manual and started vacuuming. "Wow, this thing is powerful. It would run across the room if I let go of it!" he exclaimed.

Amazed, he went all through the house, vacuuming and trying out all the attachments as he went. Bodie phoned just as he finished, wanting to know if he had supper plans.

"I'll jump in the shower and see you at Haddon's in thirty minutes," Tommy told his friend.

Bodie was seated at a table with Red when Tommy walked in. "Hey Red, aren't you supposed to be in casino someplace?" Tommy asked pulling up a chair.

"I was in a casino someplace. Now I'm here," Red snapped back.

Bodie chuckled at that as Eloisa brought a round of beers and Tommy began talking about his broken rod. Red told him to buy a new one. Tommy was insulted and Bodie intervened.

"It was a nice rod, Red, and his favorite at that," Bodie offered.

"I know they're good. Hell I've got four of Skinny's rods," Red remarked. "And no, I don't plan on letting any of them go, in case you're interested."

Tommy suddenly got a sick look and started choking. Bodie slapped him on the back to help him get his breath. Tommy jumped up and ran out the front door.

"See, I told you a hundred times he's a nut!" Red muttered.

A few minutes passed and Bodie and Red went outside to find Tommy at the back of his truck holding his nose, staring into an ice chest covered with flies.

"I forgot about my fish and never put any more ice on it," Tommy sobbed.

"That fish been in the cooler all day in the sun?" Bodie frowned.

Bodie and Red walked closer and both got a good whiff of the rotting jack even before reaching the truck....