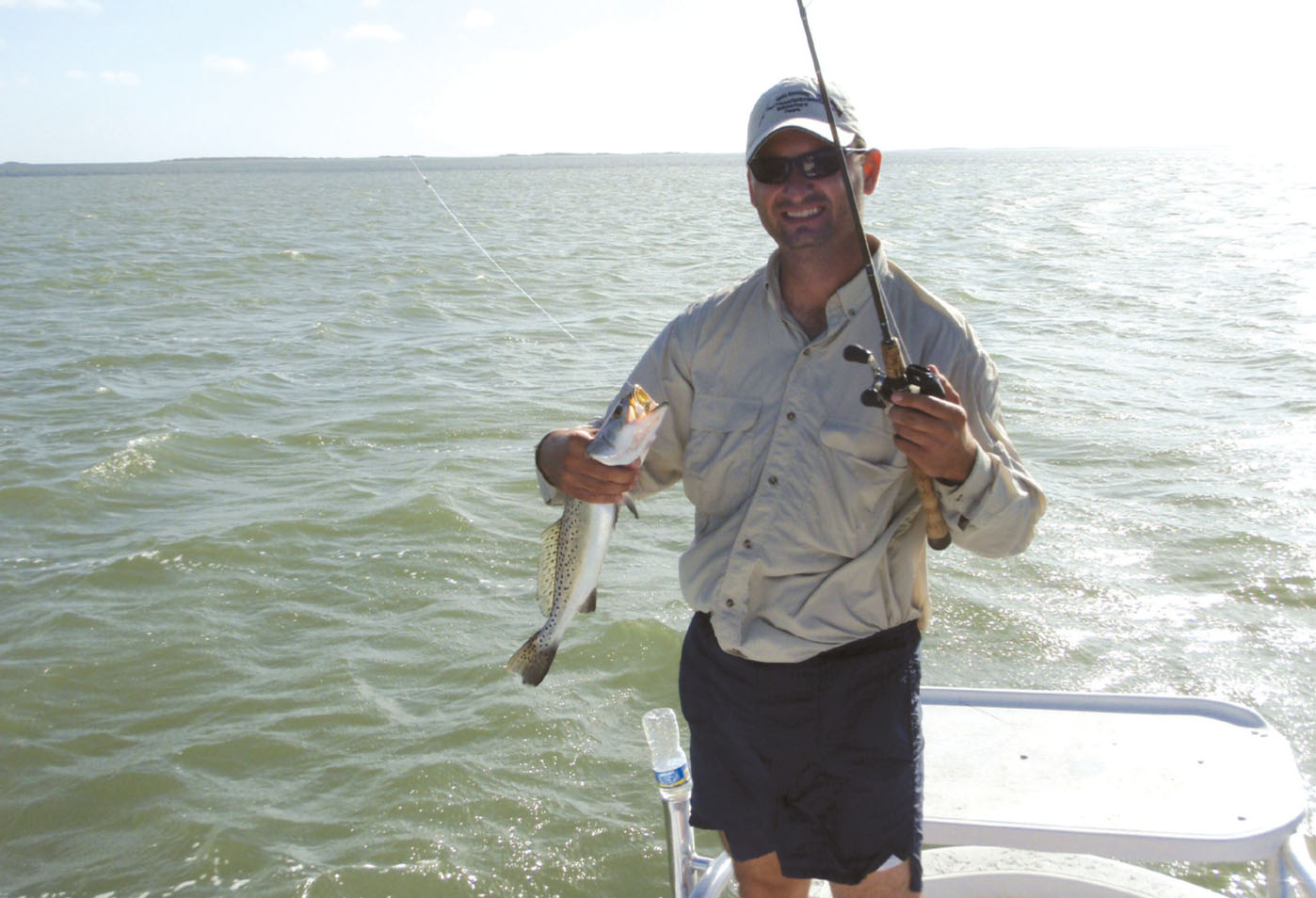 Sometimes we win.
So the Tenth Annual Port Mansfield Fishing Adventure has come and gone.

What started out ten years ago as a few guys getting together in Port O’Connor for a weekend of fishing and fun has turned into a five-day marathon fishing trip in Port Mansfield. Some of the original group is still with us but we’ve lost a few along the way to wives, babies and changes in employment. While we’ve lost a few of the core members we’ve not lost our ability to have a good time and put a few fillets in the freezer.

As usual we ate well, we imbibed more than we should have and we spent a lot of time out on the water in 30+ miles per hour winds, but the fish were there and that made us get out of bed for roll call each morning.

Gary thought enough of this milestone in our fishing adventure to have caps made to commemorate our tenth year together. Sterling, who designed the caps, even made sure that our motto was embroidered on the back of each one. “What Happens In Mansfield, Stays In Mansfield.”

I’m about to violate that motto.

Glenn, Gary and Scott got into some nice trout one morning fooling them with rattling topwater baits and soft plastics and, while the rest of us didn’t get into the bigger fish like they did, we certainly had no problems finding our five trout per day which is now the limit in the Lower Laguna Madre.

And while the trip is all about fun and camaraderie it wasn’t without heartache and pain. We managed to break three very nice fishing rods and I managed to wade into a genuine booby trap.

I was on my way back to the boat after a long wade and slid my foot off into a hole that was deep enough for my right leg to go all the way down to the thigh. When I got up I felt what I thought was seaweed wrapped around my left foot so I kicked out to free it and immediately felt a sharp pain in my right calf. I thought for a minute that a ray had gotten me but there was no slap from a tail. Now what got me was a 5/0 Kahle hook and it was buried very deep in my calf. The seaweed that I thought was wrapped around my left boot turned out to be 30lb mono with a pyramid weight and no fewer than five really sharp croaker hooks rigged on drop leaders. After cutting myself loose from the tangle of monofilament I continued to the boat.

Once in the boat I washed the area around the hook with bottled water then cleaned around it with alcohol swabs. I would have flushed the area with peroxide but the large bottle I keep in my fishing bag wasn’t there. I explained to my friend who is a novice to saltwater fishing that I was going to extract the hook and would require a little assistance from him in getting it out. He wasn’t happy with the prospect of having to watch much less assist in what I was about to do.

Now I’ve extracted more than a few hooks from other people without a problem but they were all “J” hooks or treble hooks. Removing a croaker hook shouldn’t be any different or so I thought. And I was wrong.

I attached a good length of leader material to the bend of the hook and wrapped it around my wrist while I had my friend press down on the shank with his finger. Now here’s where things got interesting.

#1 - It’s much easier to jerk a hook out of someone else than it is to jerk one out of yourself.

#3 - Your friend with the weak stomach will pass out when the hook curves inward and makes an exit wound above the entrance hole exactly the width of the gap in the hook.

Yeah, that’s right. The hook didn’t pop out. The mono slipped a little and the hook simply did what it was designed to do, it curved around and came back out of my leg. Now I don’t know if that’s how all croaker hooks act or if it was the bad angle that I had on the pull being as how the hook was embedded in the back of my leg but; I can tell you that it’s a strange feeling and a sight to behold when a hook pierces your skin from the inside out.

So okay at least the barb is now outside of my leg and we can cut it off and I can divest myself of this troublesome piece of wayward tackle. Well that was my plan; however I wasn’t in my boat and this particular boat didn’t have a pair of side cutter pliers with which to snip the offending barb. No problem, (get ready for bad idea #2)…I’ll just use the line cutters on my fishing pliers. Trust me when I tell you that the generic pliers that come with your wading belts won’t cut a croaker hook. Using all my strength I couldn’t make it happen but I did succeed in ruining one set of perfectly good pliers.

Okay now here comes bad idea #3…I’ll hold onto the bend of the hook with the pliers while my woozy friend grabs the point of the hook behind the barb and twists it to break it off. It would have worked had my pliers not slipped. I’m quite sure that they heard me scream all the way to the harbor. I don’t think my friend heard me though as he had crumpled to the deck.

So call me hardheaded but I wanted that hook out of my leg, so using both pairs of pliers, I finally managed to break the point off and extract the hook. From the first aid kit I used more alcohol swabs and cleaned the area around the wounds then I forced antimicrobial solution through the wound until I was sure that the wound channel was clean, and then I let it bleed.

By the time my son and another friend made it to the boat with some nice redfish I was more than ready for a shower and some more first aid since the memory of seeing my friend Mike McBride’s foot the day before was still fresh in my mind.

We watched the wound carefully the next couple of days looking for any redness or swelling but there was none and I felt extremely lucky that no nasty bacteria found its way into my leg.

I wish I would have thought of taking some pictures of the hook in my leg but to be honest I was in too big a hurry to worry about taking the camera out of my shirt pocket and snapping some pictures. Lame, I know, but you would have had to have been there to understand. I will be happy to show you my scars anytime you want to see them though; just ask.

Next year, God willing, will be our eleventh to join together for five days of fishing and fun and the houses are already rented. The only thing I’ll do different next year is to make sure that every boat has some good side-cutter pliers on board and a well-stocked first aid kit.

On Monday I paid a visit to my family doctor and informed him of what had happened. He was pleased with the way the wound was healing and said the steps that I took in cleaning the wound and having a good immune system had kept me out of trouble. I got a tetanus shot and to be on the safe side he gave me a strong antibiotic to take for ten days, just in case.

So be safe, make sure you have a good pair of side-cutters in your boat and make sure that your first aid kit is current and has a good antibacterial or antimicrobial solution in it. Check the dates on the items in the first aid kit and replace them as needed for they do expire. Make it part of your regular safety inspection of your vessel and you’ll always be covered.