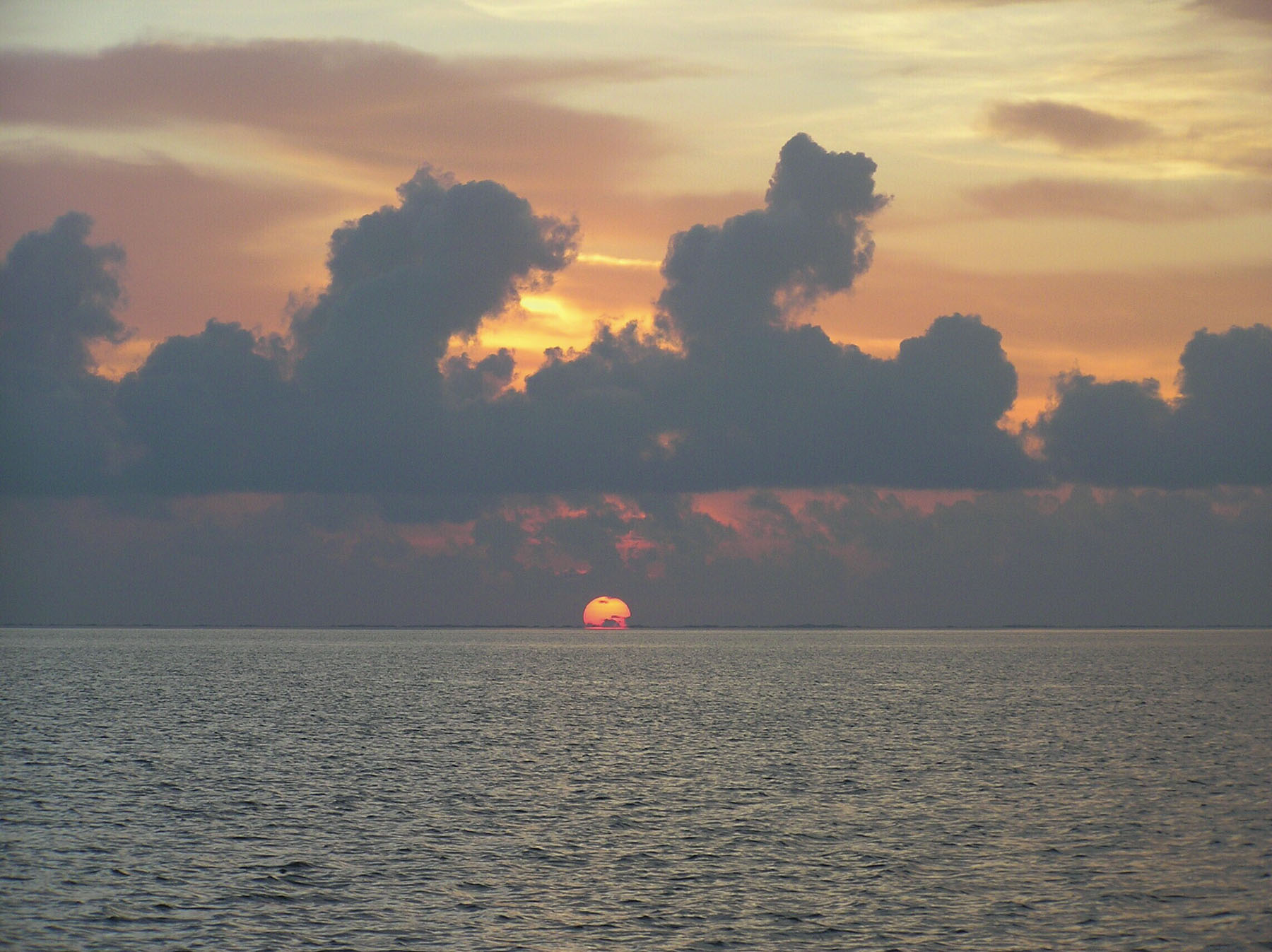 A gorgeous sunrise without a boat in sight can be the reward for leaving the beaten path. Good stuff, good for the soul too!
I've mentioned before that not all of us are lucky enough to pick our days to go fishing. Some of us have responsibilities that require showing up to work 8:00-5:00 Monday through Friday. The only way around that is to take vacation, which if you're lucky, is a couple of weeks on average but with tenure, maybe four weeks. Personally, I'd really enjoy four weeks of vacation but I'm not quite there yet. Some of us are required to work weekends with staggered days off during the week, which can be a blessing to a fisherman, but still there is no guarantee that your days off will offer great fishing weather. So, whether we get weekends or week days off, when it comes to fishing days we have to take what we get.

So what do we do as working class citizens who are destined and doomed to fishing on weekends unless we use our precious vacation days? Well, we fight the crowds on the highway; we fight the crowds at the boat ramps, all in hopes of finding a quiet spot where we can drift or wade and maybe, just maybe, pick up a few fish for our effort.

We go where others just don't go very often. Away from the towns and the cafes and such; away from bait camps and places where you can get fuel. Oh they're out there; look hard and you'll find an oasis where you won't get run over by other boats and where you won't have to wait in line to unload. The ramp might not be the best in the world and you may have to pole your way out, but by gosh you'll have your peace and your quiet and maybe, just maybe, you'll catch some fish.

There are a few places like that near me and at risk of drawing crowds I'll tell you a little about them.

Turtle Bay near Palacios, which is accessed by County Road 340, also known as Jensen Point Road, has a very primitive boat ramp or at least it was the last time I tried to unload there. I apologize for not being able to give you an update on the condition of the ramp but it's been a while since I accessed Turtle Bay from land. Most of the time I get to Turtle Bay by boat, either from Carancahua Bay or from Palacios; an easy boat ride from either place. Turtle Bay has a lot of oyster shell reefs and sand bars which are all known to hold fish.

Carancahua Bay is another bay that doesn't see a lot of traffic. Right now the only "public" boat ramp that I'm aware of is off of Highway 35 but the last time I was at that ramp it was so shallow that about the only boat that would make it out of the channel would be an airboat. But, you can access Carancahua Bay via West Matagorda Bay, and like Turtle Bay, there are many oyster reefs and pipelines that have a lot of shell on them and deep drop-offs near Wolf Point that has a good flow of water via the Carancahua River when the tide is moving. There are also two lakes that are located on the peninsula that separates Carancahua Bay from West Matagorda Bay at Carancahua Pass; Redfish Lake and Salt Lakeboth offer good fishing for redfish, trout and flounder, and with plenty of reef and scattered shell bottom. Flounder seem to love Carancahua Bay and if you're up for some gigging you've found the right place.

Tres Palacios Baygateway to West Matagorda Bay out of Palacios is a nice place to go. While the ramps can be busy on weekends you can still find plenty of places to fish and not have to worry about too much boat traffic. You can go by water to either of the bays above or you can fish up the river or along the miles of grassy shorelines with a multitude of oyster reefs. Oyster Lake and the wells in West Matagorda Bay are just a short boat ride away. You can avoid the ramps on Palacios and unload right at the FM 521 bridge on the Tres Palacios Riverup river or down, your choice, but as long as the water is salty the redfish, trout and flounder can be there.

Keller Bay used to have two decent boat ramps, one public and one private that charged to unload there. Someone recently told me that you can't use the public ramp at low tide so check before you make plans on going. Keller Bay, while not a large body of water, has a lot of grass flats with pot holes and plenty of sand and shell along the shorelines. Wade fishing along the deeper grass beds of the eastern shoreline can be productive year round. Easy access to Lavaca Bay and Cox's Bay allows a boater multiple choices. You can fish the spoil islands off of the Alcoa Channel or the gas wells out in West Matagorda Bay.

The Lavaca River out of Lolita has a couple of nice boat ramps; one in town at Frels Landing and one off of FM 616, and while a lot of people give up fishing in the rivers in the summer months, there are usually trout, reds, flounder and drum there as long as there is saltwater up the river. It's been a long time since I ran all the way down the river and into Lavaca Bay but it can be done. In any case, on those windy and crowded days on the bay, the rivers are a pleasant alternative to open water.

So if you want to get away from the crowds, steer away from them or at least head for places that have a reputation for attracting fewer fishermen. Just because the crowds do not frequent a given area should never be construed as it being a poor place to fish. On the contrary, just the opposite can be true. Some are well-guarded secrets and some simply do not offer easy access.

I say slip away and get off the beaten path now and then; it has a way of making those five grueling days between weekends pass a little quicker.