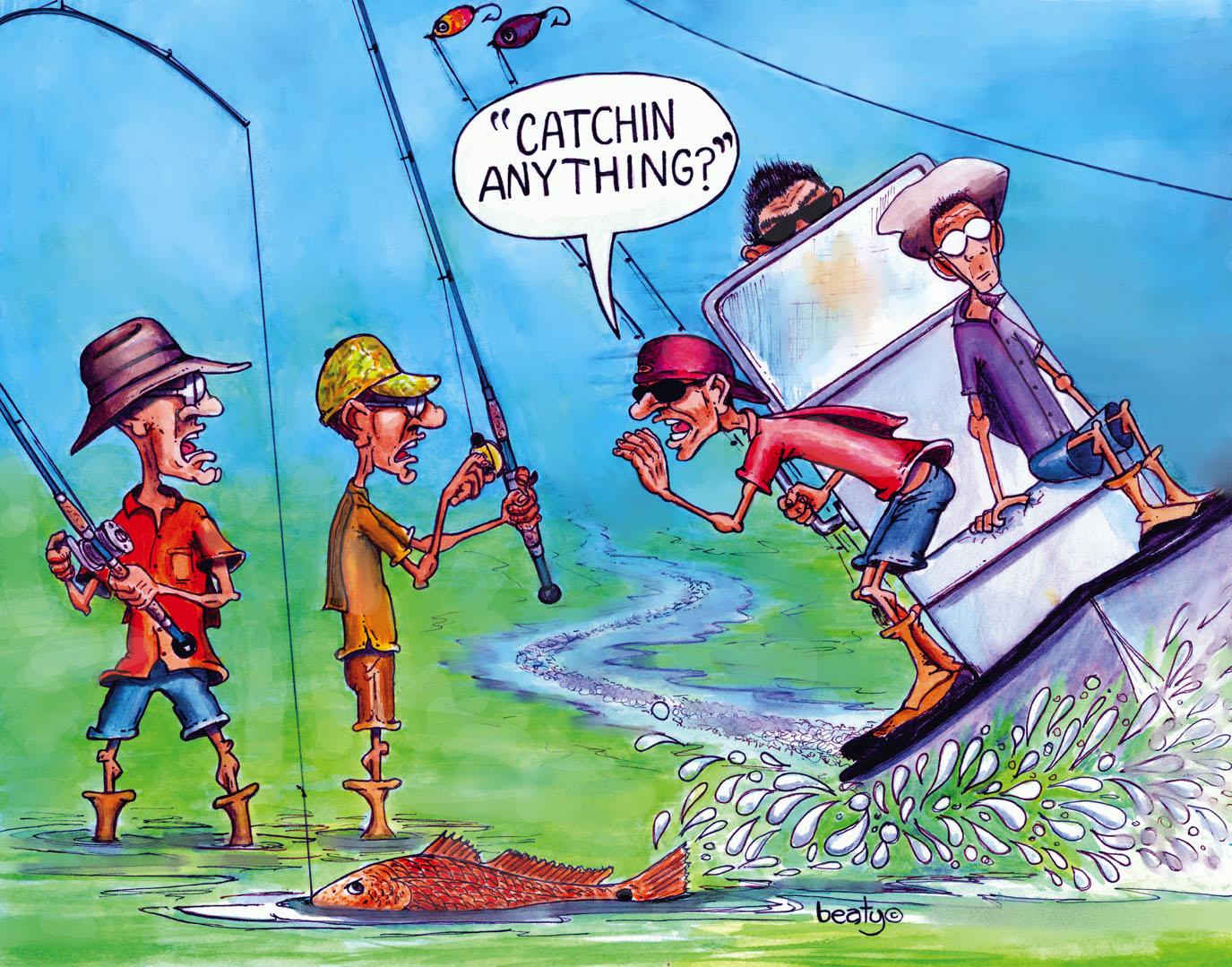 Okay so you're in the middle of nowhere with no cafe, store or rest area in sight and nature calls. It's really not that big a problem; you get out of the car or truck and discreetly take care of business. Guys have it a little easier than women in this instance, but what might happen sometimes doesa car comes out of nowhere and you're busted.

Oh come on now, you can laugh or pretend this is in bad taste; but you know it's true. Where did that car come from? Flat ground, nothing but highway in front and behind, and darn it, here comes a vehicle. It's just another example of the fact that there are more of us out there than ever before and it's not going to get any better.

The same holds true of the bays.

Not long ago I was fishing with my son in an area where we saw no boat traffic and not another human save the two of us. It was really an eerie feeling, not seeing other boats and fishermen, just doesn't happen often these days.

We had just stopped the boat and set up for a drift through a small lake a short piece off the bayfront. I doubt we'd made more than three or four casts when we hooked up simultaneously Sterling on a big red and me on a nice trout. Our backs were turned fighting the fish so we heard it before we saw it; the high-pitched whine of a shallow-running boat blasting its way through the slough, headed in our direction.

Here come these three guys in a boat that came out of nowhere and the first thing they see are our rods bending to the fish we were playing. They altered course immediately and headed straight towards us on plane. When they got just barely past us, maybe 50 yards, they cut into our drift and shut down.

For a moment at least, we thought we were the only fishermen around, but it wasn't meant to be and unfortunately it will never be that way.

Seriously people, I know there are lots of folks on the water these days, some brand-new to fishing with lots yet to learn, but not these guys. Believe it or not I recognized one of them and he is a seasoned fisherman. I could tell he was embarrassed with the situation the boat's captain had placed him in. Fact is, they made only a dozen casts then stowed their rods and jumped back up on plane right in front of us and left. Hoping the spot wasn't totally wrecked I cranked up and idled about a hundred yards further downwind and we found some more fish.

This past October as I idled into an empty shoreline, I had a boat approach on plane from my port side at wide open throttle. I know they saw me because they veered to port and then continued on plane to the cove I was planning to wade. I just continued idling in and parked right beside their boat as though they were not there. It was two late-teen boys and I guessed perhaps their grandfather. The older gentleman apologized for the boy running right in front of me then took the controls and idled away from us. When they were a good distance off he jumped up on plane and headed back the way that they came.

So in that instance someone who didn't know any better made a mistake and another apologized for it. I appreciated the apology and maybe it was a lesson learned but I had to wonder why he was letting someone run a boat that obviously had no clue. I have no way of knowing if he tried to correct the boy while underway but by their sudden stop and driver switch it made me believe the older gent finally had enough and took the helm from the youngster.

No doubt, nobody likes having another boat run across the line they're drifting, and even less, another boat joining the drift so close you could flip a lure and hook anybody aboard. Sadly, it happens with such regularity in some places that we've almost learned to shrug it off. When a boat blasted through our drift line this past summer down at Port Mansfield, I looked at my friend and uttered something our editor would never allow in this magazine. To my surprise my companion just laughed and said, "Martin, it happens so often down here on weekends nowadays that it doesn't even bother me anymore. I have to wonder whether the fish might be so accustomed to it they don't even scatter anymore."

No one individual or class of fishermen owns our bay systems. That's a true statement.

But is it not also true that this statement is the first thing to come from a rude fisherman's mouth the second you call him on the carpet for his rude behavior? Seems to me it has become the auto-defense statement they throw at you to distract you from dishing out the manners lesson they need so desperately.

It's not my water and neither is it yoursit's ours to share and enjoy. And this brings me to a question; what has become of the fishing public's common sense and common courtesy?

I have an idea and I would sincerely hope that those who cut our drifts, pull up and begin fishing within casting distance, or somehow think it's OK to idle alongside a group of wading fishermen to inquire whether you've caught anything and what they're biting on, (actually happened to my son and a friend) are totally innocent, clueless newbies.

I said as much to a friend who laughed heartily and then said it was I who was clueless. His opinion these are the same people who never signal a turn, dart across lanes on the freeway, stay in the passing lane, and wait until the last second to merge at a lane closure and cause traffic jams. They're the same clowns that steal parking spaces you're about to pull into and park in the handicapped slots as though they never saw the sign. They care about nobody other than themselves and no one is going to change them or their attitude.

I'd sure hope that's not true but, deep down inside, I fear that he might be right. Maybe the error of their ways comes natural having never been taught self-respect and therefore incapable of respecting their fellow man. Sometimes I wonder if perhaps in some twisted logic they actually believe they own the bay. Surely not!