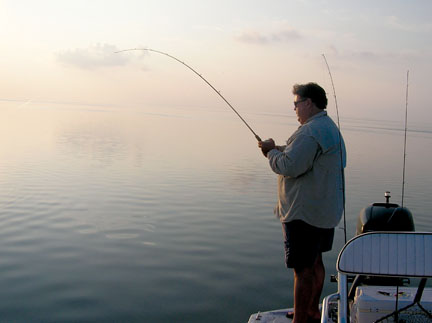 The Mirrolure made a splash when it landed in the slick-calm and shot a set of growing rings. I let the lure sit still for a few seconds then gave it a slight twitch with my rod. They say that the worst thing an angler can do is anticipate the strike, especially when fishing a topwater lure, but the telltale wake that was bulging toward the She Pup was pretty hard to ignore. There was no blow up and there was no explosion. When the fish hit the lure it just vanished in a swirl of green water in the classic toilet flush and the fish hooked itself. I gave the big red a good jerk just to insure the hooks were set well and the fight was on.

There was no wind this morning and while running across the shallow spoils we saw the bait being molested as I closed the throttle to further assess the situation. My first problem was that the bottom here was muck and mud of the worst kind and those who know me will attest to the fact that I'm not mad enough at any fish these days to fight that stuff. That and the fact that several stingrays were visible scooting around on the bottom with their Devil tails sliding behind them was just a booster to my no muck wading philosophy. One member of our party attempted to slip out of the boat to make a wide circle to the school but quickly changed his mind after sinking to his waste in the quagmire. It would take some clean water and sandy bottom for him to wash the mud off of his clothes and wading boots.

Our momentum pushed us closer to the school of fish after I killed the engine; enough to put us in casting range of the fish that had begun to feed back toward us. I had moved to the stern of the boat to fight the fish that I had on and my two partners for the day were fishing mid-ship and on the bow. One was throwing soft plastics and one was fishing a She Dog. Both of them hooked up on their first casts to the school of feeding fish.

My red was twenty four inches long and went into the cooler for some really good grilling that evening and the other two guys added theirs to the ice as well. As soon as it had started it was over as the school sounded and continued with their search for breakfast. About the time we were going to crank up and head to our wading spot of the day, one of my friends cast his soft plastic bait and almost immediately hooked up with what at first I thought to be another redfish. It turned out to be a twenty eight inch trout that had made its way into the area where the reds had just disappeared.

I see people wade fishing the muddy bottoms of our bays often and I hear a lot these days of anglers getting nailed by stingrays when they lose their balance in the soft stuff and stepped wrong or when they had to step instead of sliding their feet. In the mud and the muck it's often not possible to slide your feet and you must take steps as you struggle with the terrible footing. Some say that you have to wade in the soft stuff to get to the big trout. I say bull.

The first thirty inch trout that I landed was while drifting a small bay from my boat and likewise the first thirty my son landed was while drifting a large expanse of shallow mud flats from a boat. That and my knowledge of others who have put large fish on the wall or caught, photographed and released them while drifting pretty much refutes the old tale that large trout can't be caught while drifting. Fish are where you find them and if they're hungry and you are offering what they want, the chances are you'll catch them no matter if you're struggling through soft bottom, wading on hard sand, or casting from the deck of a drifting boat.

Oh some will disagree and they'll say that the chances of catching a true trophy trout are better if you'll get into the mud that is warmer in the winter than the sand or shell bottom and maybe they're right. But sinking into muck that goes over my knees pretty much settles the debate for me and really when you think about it, it negates the reason you wear your stingray boots. In mud that goes more than half-way up your boots you're now presenting your bare upper leg as a target for rays that you might run into since your boots can't protect there. And no, you don't have to step right in the middle of a ray to make it use its tail. You can push into one and in some cases they'll take defensive action.

I've watched guys in the soft stuff struggling to keep their balance and in my younger days I was one of them. Many times I've lost shoes in the mud and had to carefully make my way back to the boat so as not to cut my foot on anything sharp. We waded in tennis shoes back then with no thought of stingray protection. We worried more about slipping off into mud so deep we would go to our necks in the back bayous of Matagorda Bay's south shoreline and many times I've had to crawl out of an extremely muddy area and was just lucky that I never got hit in the upper body by a ray.

I fished a tournament a few weeks ago and noted that the heaviest trout weighed in was caught by Captain Wayne Stark's crew. While talking with the good captain about the fish he told me that the trout his clients had caught that morning were larger than the reds they caught and they were all caught while drifting. Imagine that.

So keep to the soft stuff you young and strong warriors of the bays and I hope that for your efforts you'll catch the trout of a lifetime and that your luck is better than mine. In all the years I fought the soft stuff I never landed a trout longer than twenty nine inches. Did I mention that my first thirty incher was caught while drifting?

My grandfather had a favorite saying and now that I think about it I do believe he was trying to tell me something. "Too soon we get old; too late we get smart."

Hope to see you on the water. I'll be the guy wading on the good bottom or drifting across the muddy flats in the comfort of a boat. I've not only gotten fatter over the years, I've gotten smarter.

I hope you all have a very Merry Christmas and a Happy New Year. Lord knows that we have much to be thankful for.