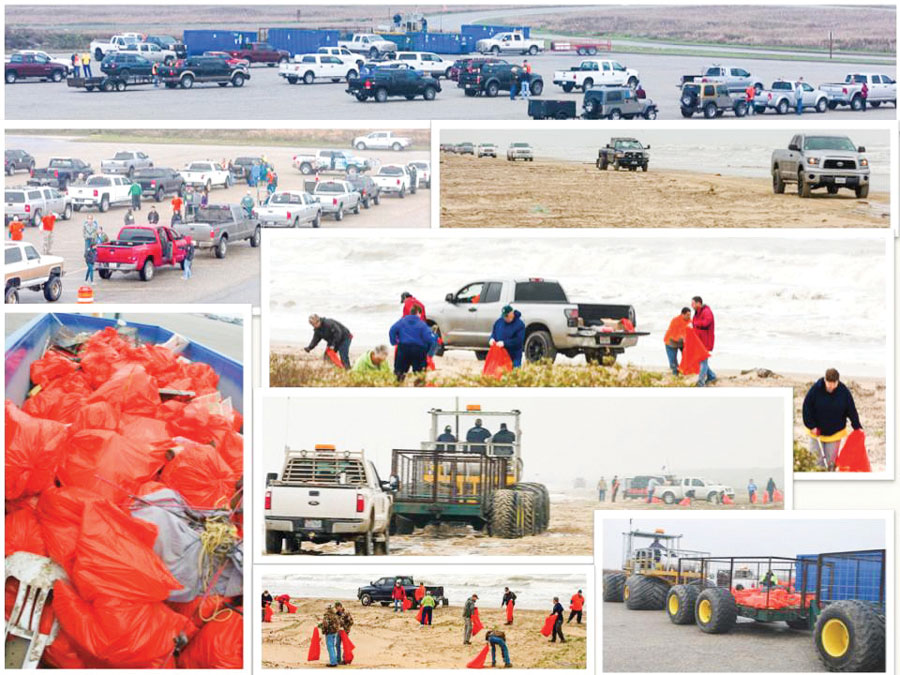 The past several months have been pretty rough for me and it sure feels good to be back on my feet again. I was very concerned I'd still be sick when it was time for the Big Shell Beach Cleanup and, miraculously, I began to show signs of life about two weeks prior to the event.

As a veteran beach fisher, monitoring long-range weather forecasts has been part of my routine for many years. As the weeks dwindle toward the Big Shell Beach Cleanup, I go on high alert weather-wise as no matter how diligently we plan, the weather will be out of our control, and this then has the ability to confound even the best laid plans.

The closer we got to this year's cleanup the worse the weather forecast got. The evening before the cleanup, the forecast called for 50 and steady rain through the night and all day Saturday. Certainly not the first time the cleanup has faced this type of forecasted conditions. But what really concerned me was the fact that the forecast also included 25 mph east wind. East winds like that are almost a sure bet to push the water up to and beyond the dunes.

The cleanup has really grown up. In 2008, Stephen Naylor and I started Friends of Padre with the explicit purpose of seeing to the organization and management of the cleanup in years to come. A managing board was put in place. Section leaders were chosen with the same assignments yearly. Specific individuals were assigned specific tasks such as handling the event T shirts. So there's not a lot of confusion and everyone knows their job in advance. But there is absolutely no way to beat the weather.

It rained hard and the wind blew really hard Friday evening and into the night but we were stunned to arise Saturday morning to a light north wind and very light drizzle. At Malaquite the wind was light from the north but tides were high, the seas were running 13 feet. We decided to play it on the side of prudence. We sent our section teams out in smaller groups than ever before and each section had radios.

We sent our first group south down the beach with instructions to stop and turn around if the tide got too high. We got to the 22 mile before being forced to stop and turn around due to high water. Each group to the north stopped when the group at the 22 mile made their decision to stop and everybody started picking up trash, working back to the north. The tides did eventually get quite near the dunes but had we waited longer we would have really had a tough time getting back to the pavement at all.

The finds of the day were a bale of marijuana and a yellow-throated warbler. Based on the weather forecast alone it was stunning that any volunteers showed up at all. And yet 400 volunteers showed up and stuck it out, and picked up 25 tons of trash. Certainly we've picked up far larger amounts of beach debris but we sure had a lot going against us this time. We've now removed 2,336,000 pounds during the various annual efforts of this event.

I spoke a bit earlier about the planning and refining of the Big Shell Beach Cleanup operating plans and this process will be forever ongoing. For years, getting the section teams organized and formed up for down-island departure in the darkness of the Malaquite parking lot has always been a nightmare – organizationally and also from a safety standpoint. We made the decision to delay departure this year from 7:00 A. M. until 8:00 A. M. We emptied that parking lot faster than we ever have in the dark.

But what stands out the most to me is the loyalty of the volunteers. Good weather or horrible weather years they just stand out there and fight it; as if it were a life or death battle. Such a contrast to what we see elsewhere, folks that just seem intent on tearing up everything they can.

This was an unusual cleanup. Small groups and individual volunteers working in the middle of nowhere in the drizzle. Miles between smaller groups of volunteers with the next group barely to be seen in the distance. It had a surreal look and what a statement it made to the quality of individuals that come out for such an event.

Well this little yellow-throated warbler is waiting out the storm. He is the first sign of the neo-tropical bird migration back north to nest. The fish won't be far behind.

And of course there are our sponsors, without whom this and similar events could not afford to go on. Big thanks to outdoor writer, David Sikes, of the Corpus Christi Caller-Times, Everett and Pam Johnson of Texas Saltwater Fishing Magazine, Padre Island Moon and all the other publications who put in a good word for us.

Remember that the speed limit on PINS changed from 25 mph to 15 mph on March 1 and nesting turtles won't be too long behind. Take care of yourself and each other, be safe and have a good season.

"If we don't leave any there won't be any." Billy L. Sandifer