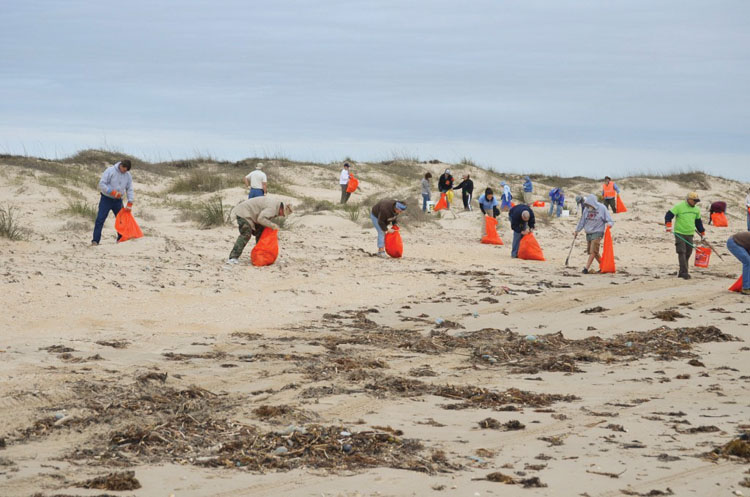 Having loved and enjoyed the wonders of Padre Island since a youngster, I finally got fed up.

One day in 1995 I approached the then park superintendent of Padre Island National Seashore and proposed the idea of conducting a one day, all-volunteer beach cleanup in the rugged part of the 4WD-only region known as Big Shell Beach. He bluntly stated he didn't feel it stood any chance of being a success but that I had both their permission and blessing to proceed.

I chose the Big Shell because there is a convergence of two major ocean currents in that area that deliver an incredible amount of floating debris, driven ashore from all across the Gulf of Mexico. I had no plan in hand whatsoever when I met with the superintendent; the first step was to secure permission.

With permission in hand I began to make tentative plans and solicited help of anyone and everyone I could think of. Buddy Gough was our Corpus Christi Caller-Times outdoor-writer at the time and he was a huge asset in helping spread the word through his newspaper articles. Buddy had lots of contacts, too. Island House Condominiums was another great early supporter. We had to improvise as we went, kind of like engineering a bridge from midstream.

To my complete amazement (and everybody else) on the morning of April 29, 1995300 volunteers showed up and removed 50 tons of trash from 11 miles of PINS beach. The Big Shell Beach Cleanup became an annual event. In the years that followed a total of 6530 volunteers have participated and picked up 1163 tons of trash. That would be 2,326,000 pounds, if you prefer to express it more impressively.

I started this effort because nobody was willing to do iteven though everybody hated the trash. It has always reminded me of the quote often attributed to nineteenth-century Irish political philosopher, Edmund Burke, "All that is necessary for the triumph of evil is for good people to do nothing."

There is no good to come from folks sitting around complaining. Good can come only from taking action to change the situation so, we took action!

As years went by Tyler Thorsen and I pretty much organized and coordinated the event ourselves while depending heavily on outdoor writer, David Sikes, (who took Buddy's desk at the Caller-Times when he retired). Other outdoors and fishing publications also came on board (including this one), expanding our publicity reach.

Longtime friend, Ace Leal, joined the team and was a blessing for years. CCA Corpus Christi and Brush Country chapters became and remain very valuable participants and supporters. Gaining the support of David Ainsworth-Ainsworth Trucking Co. was another windfall. David has furnished 4-WD trucks and trailers to haul trash off the beach along with countless ice chests of bottle water for thirsty volunteers over the years.

In 2007, Stephen Naylor and I founded a non-profit 501 c3 entity, Friends of Padre, the original purpose of which was to insure the continuation of the Big Shell Cleanup after my days at the helm were over and done. Since that time Friends of Padre has taken the reins of the Big Shell Beach Cleanup and has also become involved in other projects related to the well being of Padre Island. More information on FoP is available at www.FriendsofPadre.com.

A handpicked number of conservation-minded and knowledgeable island users comprise the FoP board of directors, folks Stephen and I know and trust to carry the tradition into the future. As the event has drawn more interest it has become more time consuming and complex to manage, Friends of Padre makes it possible to handle the job efficiently.

Sharkathon, the most conservation-minded shark fishing tournament and brotherhood of shark anglers I have ever known, began to make very generous annual donations to the event and we also began to receive occasional donations from several companies and private individuals. Mr. David Ainsworth purchased a large, rough-terrain tractor-type vehicle called a Rollagon, specifically for pulling large heavily-laden trash trailers during the cleanup and this has been a godsend.

The speed limit on the PINS beach changes from 25- to 15 mph on March 1 each year, and for this reason we schedule the Big Shell Cleanup to occur on the last Saturday of February to take advantage of the speed limit transporting workers and hauling out trash. This year's event will be held February 27 and will commence at 8:00 AM with work groups heading down-island. Volunteers are encouraged to arrive early at Malaquite Pavilion to receive their participant appreciation packages and work team assignments.

Volunteers without 4WD vehicles are very welcome and will be assigned rides with 4WD equipped team leaders and others willing to take them. Operators of 4WD vehicles who might own or be able to borrow a trailer for hauling trash are encouraged to bring one along. Caution is advised; long, heavy utility trailers are difficult to tow in loose sand. Shorter trailers with large tires in good condition (especially single-axle rigs up to 12' length) are best-suited for this type of work.

Dress appropriately for the weather as the Cleanup has no "rain date" and we have traditionally worked through inclement conditions many years in the past. Long trousers, long sleeve shirts, windbreakers and slicker suits are highly recommended. Wear a hat and a pair of sturdy high-top work shoes or hiking boots!

Food will be available at Malaquite at the conclusion of the event and iced water and lite snacks will be available in the work area. By all means bring a snack or light lunch if you think you might need one. All volunteers will receive commemorative event t-shirts along with other fishing related goodies.

This is a one-of-a-kind event and it takes place in a wonderful kind of a place. It is considered the most successful cleanup of its kind in the USA. It is a wonderful way for parents to teach their children the importance and responsibility of caring for the great outdoors. Caring for it so it's still suitable for them and their children. But it all depends on you stepping up and lending a helping hand.

Hope to see you on the sand February 27! -Billy Sandifer